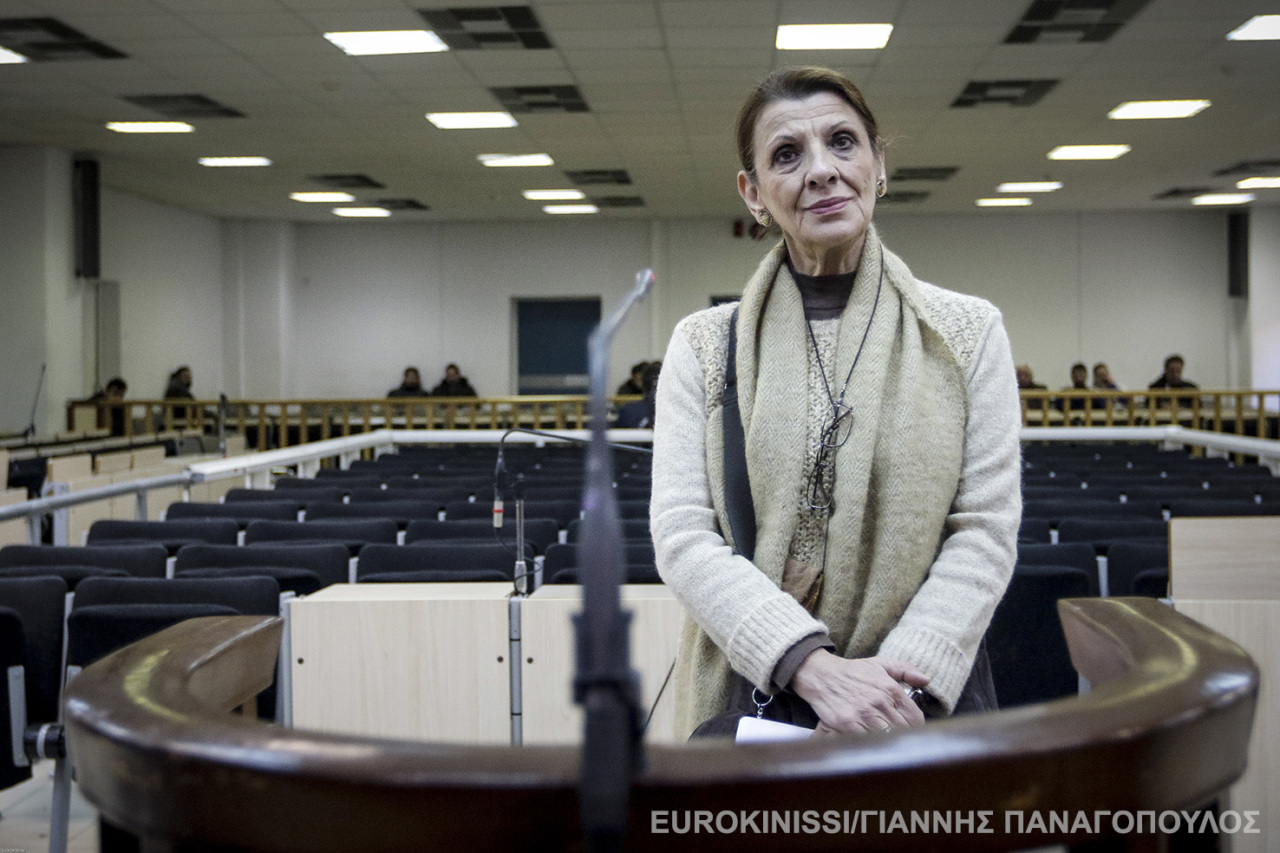 Day 214: “as if an invisible hand is conducting this terrifying orchestra”

The witness stated that she is a retired actress and that she was a member of the Athens municipal council from 2011 to 2012. She resigned when she was elected a MP with SYRIZA in the Achaia prefecture – a position which she held until August 2014. Concerning the attacks by Golden Dawn which she knows about first-hand, she noted that apart from her political position, she is also a resident of the Agios Panteleimonas area since 2001 and she was watching closely the goings-on in the area from 2008 up to 2013 and the murder of Fyssas, after which the incidents of violence were greatly reduced in number.

She described the pogroms against immigrants that took place in the center of Athens after the murder of Kandaris, which were perpetrated by groups of people dressed uniformly with camo pants and black shirts bearing the Golden Dawn logo or the meander. The witness noted the existence of these groups in October 2010 when she was preparing for the regional elections, and recounted the incident of the visit of Alekos Alavanos, who was attacked by “concerned citizens” whom, as she said, she saw later in the protest rally dressed and behaving differently. She also mentioned another incident at an event of “Open City” [a SYRIZA municipal initiative] who were thrown bottles and yoghurt right in front of riot police units.

The witness noted that the residents were afraid and that the people that presented themselves as “concerned citizens” where a minority in the area of Agios Panteleimonas, and whom you could easily find in the squares of Attiki, of Victoria, or of Syntagma. The witness had identified among their number Skordeli who was a frontrunner in every march, as well as Giannatos who “at the time was a spokesman for Golden Dawn and was frequenting the police station wearing the Golden Dawn logo”, and she had been attacked outside the Agios Panteleimonas Police Station on the day after an event organized by the Movement to Deport Racism in January 2011, where Giannatos insulted her for organizing events in support of immigrants who “break in and burn churches”.

Concerning Skordeli, the witness stated that she was present in the incident against Alavanos and Portaliou, and that Skordeli, in one municipal council meeting, had likened immigrants to cockroaches in need of an exterminator. The witness went on to mention that there were problems in the area and that there were homeowners who rented basement flats to 30 people for 10 euros per person per month. The witness testified that the “concerned citizens” were controlled by Golden Dawn by pushing them towards a constant protest process, and who were supported through many food charities only for Greeks, blood donations only for Greeks, and this had an effect to people that had been hit by the financial crisis. Furthermore, the witness testified that Kasidiaris and Panagiotaros were urging people to drive out the “enemies” from the country and that the democratic system is “nothing” and that she had been verbally attacked by a group of Golden Dawners when she was coming home one night from the Parliament and bumped into them, and she also made a relevant complaint to the SYRIZA department of human rights.

Concerning the attack on the PAME members the witness noted that it was “planned in advance” because a few weeks before Panagiotaros and Michos had almost announced it when they said that “the lackeys of KKE must be crushed”, “the Shipping Yards must be cleaned out” etc, as well as by the fact that they were surrounded and attacked by people bearing weapons, in the same way that they always do: quickly, they strike and leave “as if an invisible hand is conducting this terrifying orchestra” as she said. According to the witness, they are acting similarly in the Parliament itself, when at one time Arvanitis, the Golden Dawn Achaia MP, during a committee meeting about the German war restitutions, motioned to her that he will cut her throat.

Concerning the Agios Panteleimonas Police Station, the witness labeled it “sinful”, and that they have a lamentable presence in various incidents, while the incident involving Giannatos happened in front of three policemen, where two of them prevented the third from intervening in her behalf. “Moreover”, the witness went on, “when 15 people were beating immigrants, at the station later were brought in two injured immigrants and none of the people with the brass knuckles”.

Responding to a question by the state prosecutor, the witness stated that a small percentage of the residents of Agios Panteleimonas supported Golden Dawn, but this percentage was further eroded after the murder of Fyssas, and added that combined with the police’s inactivitiy, most people were afraid to protest or press charges. According to the witness, Golden Dawn never wanted an arrangement based on peaceful co-existence, but wanted to drive out the immigrants by attacking them, and by wearing the Golden Dawn logo while at the same time covering their faces, showed that they assumed the political responsibility of their actions but tried to avoid the legal consequences.

The witness answered in turn to questions by civil action counsels Antanasiotis, Theodoropoulos, Vrettos, Malagaris, Papadopoulou, Kabagiannis, and Skarmeas and stated that the residents of the area were terrified from Golden Dawn’s activity and to illustrate her point she described a group of people during the pogrom that followed the murder of Kandaris dragging a pregnant woman through the streets and threw stones at immigrants running in the streets.

The witness added that there are common characteristics between the attack on the PAME members and the attack on the Egyptian fishermen because the motive was financial in nature, that is the control of the zones in order to press downwards the workers’ daily wages, and thus please the shipping moguls who are the employers of Golden Dawn. The witness also repeated for the court a statement made by Kasidiaris in those days who had said that as Golden Dawn they are waiting to control the municipal council and then they will truly unleash a pogrom.
The witness then stated that the whole of the criminal behavior of Golden Dawn from 2008 to 2013 was part of a carefully organized plan, to make their presence known through violence in order to reap the benefits they managed to reap. The witness also said that the squad and the battalions of Golden Dawn are similar to the Nazi assault squads and a Nazi organization. When asked whether the widow of the murdered Kandaris was the first person that would have a right to call on the “self-appointed” perpetrators of the pogrom, the witness stated that the widow along with the murdered man’s relatives sent a letter which was read in a municipal council meeting and is a paragon of civilized discourse.

Concerning the Nazi salute by Michaloliakos, the witness stated that it took place on the first meeting of the municipal council, that he never apologized, and in another speech he had said that “this hand does make the Nazi salute, but it’s a clean hand”.

The witness stated that in the incident involving Arvanitis she was the target of his gesture and not one of his colleagues, and that there was a protest gathering held outside the Ministry of Citizens’ Protection by the SYRIZA department of human rights. When asked a relevant questions she stated that in an antiracist concert that took place on January 2011, a group of Golden Dawners had occupied the space outside the venue and wouldn’t let people in.
When asked whether she had been appointed a security detail as an MP, the witness said that she was given two policemen two weeks after she was elected because the police station of Attikis Square informed that her car’s window had been smashed and they didn’t think it was a burglary, so it would be better is she was guarded. The witness also said that one of the pogroms in Athens was fronted by Panagiotaros and Kasidiaris and that some of the “concerned citizens” were longtime residents of the area that had been duped by Golden Dawn.

When asked she responded that even though she was an MP of the Achaia prefecture she was a resident of Athens and that her prefecture was the choice of her party and that she went on the ballot to support her comrades. In answer to another question, she said that there are many people that voice fascist and racist opinions but they don’t have assault squads to put those opinions in effect. Furthermore she said that at the time the shipping yards were trying to put into effect individual contracts of employment with the S/Y workers and companies and that Golden Dawn was working for the shipping moguls.

The presiding judge adjourned for January 17th, 2018, in the Women’s Wing of Korydallos Prison.

PrevDAY 213: “Even in Parliament they confirm that they operate as a criminal organization and not as a party.”
Day 215: “for Golden Dawn honor is to hunt down all those whose blood is not like ours”Next 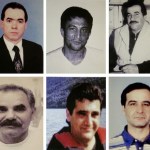 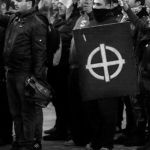 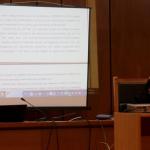 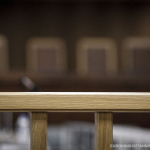 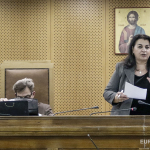