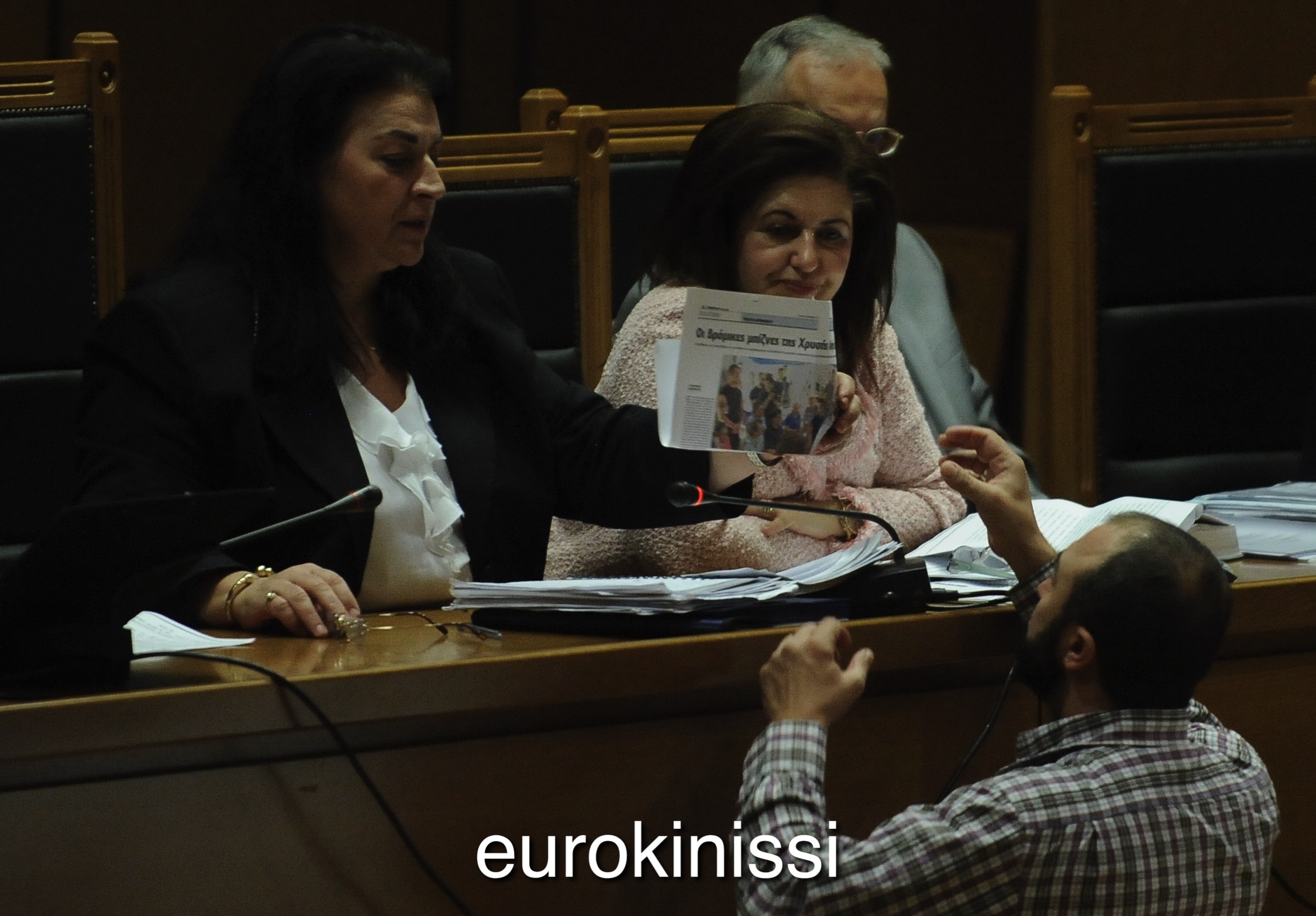 DAY 97: Commencement of the trial of the separate case involving the attack against members of PAME

The courtroom remains open to the public upon presentation of a state ID card, which is retained by court authorities for the duration of the session. Some members of the press were present, as well as a greater number of spectators, compared to previous hearings.

Civil action counsel Papadakis requested to comment on the separate case of the Egyptian fishermen and the recording of his statement to the minutes of the trial. The presiding judge rejected the request and the aforementioned counsel appealed to the Court, which reserved its decision.

Civil action counsel Vrettos requested the personal appearance of the rest of the defendants [:Kyriakos Antonakopoulos and Christos-Antonios Chatzidakis], who are directly involved in this part of the proceedings. The Court reserved its decision.

IV. Continuation of the proceedings with the commencement of the trial of the separate case involving the attack against members of PAME in Perama: Witness examination of plaintiff claiming damages Sotiris Poulikogiannis

A. Examination of the witness by the Court

Witness Sotiris Poulikogiannis, worker at the Perama Shipping Yards [henceforth: Perama S/Y], president of the Piraeus Metalworkers Trade Union and member of PAME, explained the mode of operation of the workers’ trade unions in the Perama S/Y. He pointed out that the union he is a member of is the largest of its sector. Then, the witness proceeded to describe the events of 12 September 2013, the subject of this trial. More specifically, the witness testified that on that day, at about 22:30, 18 to 20 workers, all of them members of PAME, gathered to put up posters about the festival of KNE (the Youth League of the Communist Party of Greece) around the PPA grounds (Piraeus Port Authority). The action hadn’t been made known to third parties. After a few stops, the members of PAME in their vehicles reached the traffic light that leads to the Perama police station, on Dimokratias Avenue, at the intersection with Nireos St. and Sofokli Venizelou St.

At that point two groups appeared -“known as assault squads” according to the witness-, each comprised of about 25 people. Up to that point they hadn’t been noticed by the people putting up the posters, as they had parked elsewhere. A few people appeared shouting “Where’s Poulikogiannis?” and forming a semi-circle they rounded up the people putting up the posters, who had retreated next to their vehicles. It became clear that the leaders of the two groups were Pantazis and Chatzidakis, whom the witness knew from before. The aforementioned leaders shouted that “You are finished here. We are the ones calling the shots now. We are G.D. commanders, we’re calling the shots here”, they were saying, amid swears and insults. Every last person in the two groups was wearing black, and -apart from the two commanders- they were carrying clubs, metal truncheons, and bats, customized with various metal pieces at the front, such as protruding nails or blades. A lot of them were wearing motorcycle helmets. The two groups included some minors, who were holding rocks. It was then that Chatzidakis, without provocation, shouted to one of the participants in the poster action, “What are you looking at? Now you’ll see.” and the ring started tightening around the group of workers, and the assault began in earnest. The witness was hit with a club with steel points, by someone from the 4-5 people that were standing next to Chatzidakis and Pantazis and he lost his senses. At the same time his comrades fell over him to protect him. There was no way they could escape, given the formation held by the attackers and the vehicles at the PAME members’ backs: The attackers didn’t just want to scare them, or they would have left some avenue of escape.

The witness testified that the attack lasted for 5-7 minutes. When the witness came to his senses, he got up and saw that the attackers were hitting the cars of the PAME group. Then someone shouted “No more time”, and they left on foot by separate ways. Each of them had his own specific and discrete role: the commanders directed the attack, the minors were throwing stones, and the adults were attacking people with clubs. The witness believes that since there are no personal differences that would justify such an attack, that he was singled out for symbolic purposes, as the leader of the group. The witness also stated that 50-100 meters away he could see policemen, who had a full view of the attack, but took no action. During this time, the residents of nearby apartment blocks had come out on their balconies and were shouting. A large police force arrived after the attackers left. The chief of the Perama Police Station was with them, shouting “I don’t want you here, I want the detention and arrest of the people that attacked us”, however the policemen present just looked on with indifference. Finally, there were no arrests or detentions, and the attackers left unchallenged by taking the ferry boat to Salamina.

The witness stated that the attack left 9 wounded, which were transferred by ambulance to Thriassio Hospital. The following day the witness gave a testimony to the police, for the first time, and named as perpetrators, among others, the following: Pantazis, Antonakopoulos, and Chatzidakis, whom he had identified at the time of the attack. The witness testified that the assault he had described was surely carried out in collusion with leading contractors in the Perama S/Y, who have been trying for years to disband the union, so that they won’t have to put up with collective agreements, sanitation regulations etc., not to mention the financial benefits, which would be huge. The witness stressed that this was the reason for the meetings that had taken place between said contractors and the Golden Dawn leadership, and that money had changed hands. It was a dialectic relationship and both parties had vested interests. The contractors wanted the reduction of wages etc., while Golden Dawn wanted to increase its voter base, since the people they would attack would be of opposite political creed. A year before the attack took place Chatzidakis had met with the witness and, among other things, he had introduced himself grandiosely as “commander of a Golden Dawn assault squad.” On 8 August 2013, a month before the attack, a meeting took place in the Perama S/Y cantina between Lagos, Panagiotaros, and Michos, accompanied by 40-50 bodyguards, and 15 workers, and Lagos had said that “those lackeys, the abscess that is PAME will be stamped out”. It became known that the aforementioned 15 workers had the intention of founding a labor union under the Golden Dawn sphere of influence.

The witness testified that he read in an article that was published in the newspaper Efimerida ton Syntakton that missives had been exchanged and that the attack he witnessed was organized by the G.D. leadership. The witness reported that Golden Dawn has a modus operandi that resembles the Nazis’, including the Führer principle, and that it maintained assault squads that carried out other known attacks -which he briefly mentioned-, in order to terrorize the populace. The leading party members were trained like the special forces in the military. According to the witness, Golden Dawn asserts that it comes from “the seed of the defeated of 1945”, which means they are successors to the Nazis. The witness thinks that “It’s a miracle we’re [him and his comrades] alive” and mentioned that he has received threats after the attack, in connection with the trial of the case at hand.

Defense counsel Roussopoulos invoking article 224§2 of the Code of Criminal Procedure motioned to strike out the parts of the witness testimony where his sources aren’t named. He also requested that the persons named by the witness should be called to testify before the court. The district attorney and civil action counsel Papadakis understandably motioned to reject said requests. The Court reserved its decision on the aforementioned requests.

C. Cross-examination of the witness by civil action counsels

The witness was then examined by the civil action counsels Sapountzakis, Stratis, Vrettos, Zafeiriou and Theodoropoulos. He was shown relevant photographs and a board depicting a plan of the area where the attack took place, in order to provide some clarifications. When he was shown a relevant photograph, the witness stated that Golden Dawn wanted “our biological extermination, not the ideological one, which is handled differently.” After he was shown another photograph, he mentioned an event hosted by Golden Dawn, featuring Germenis, Kasidiaris, Kouzilos etc. outside the G.D.-controlled labor union, which was founded with G.D. members and bears the name “Agios Nikolaos”. The event commemorated the 2-year anniversary of the attack under deliberation. The witness referred once more, and in more depth, to the Golden Dawn’s Nazi ideology, the habit of treating Hitler like a demigod according to certain data, to the fact that communists are ideological adversaries to Nazis-Golden Dawners, etc. The witness also repeated that the attackers had an aim to kill, that they had a plan “To exterminate us, no one to be left alive. We’re alive out of blind chance.” he said.

When questioned by civil action counsel Theodoropoulos, the witness mentioned that Pantazis and Chatzidakis have never denied their relation to Golden Dawn. Also, that the Golden Dawn Press Office issued an statement on the day following the attack, which reads that the event under trial “is a mass of communist lies”, by which lies they were purportedly trying to prevent Golden Dawn from establishing a new union, and that they [the communists] thought up the whole incident.

According to the witness, this is the best method to cover the actions of an assault squad, whose members not only weren’t subjected to some form of party discipline, but were praised for their actions to boot. The witness ended his testimony -for the present day-, amid numerous protests from the defense counsels concerning what he had said -especially about ideological issues-, by pointing out that the Perama S/Y is an operation that touches on various interests, being of great financial significance to Greek matters, and that the organizing of communist workers cause various problems to the employers’ activities, due to their trade union nature.

At this point the presiding judge adjourned for Tuesday, the 1st of November, 2016, when the witness will continue his testimony, cross-examined by the rest of the civil action counsels and the defense counsels.