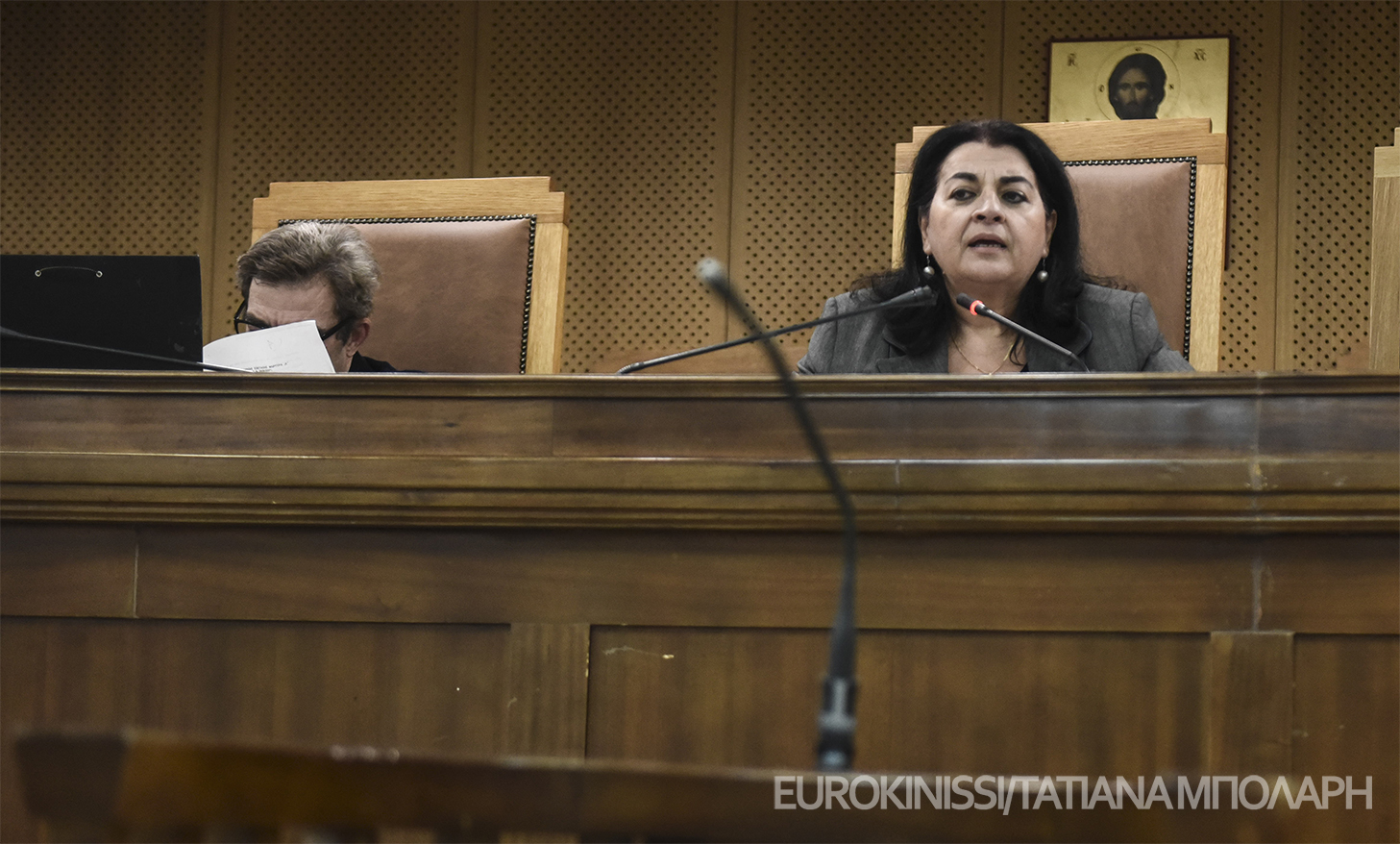 Day 201: nothing went forward without the approval of Lagos

Before the hearing commenced, defense counsel Michalolias Giorgos submitted a written statement by defendant Zaroulia that informed the members of the court that defense counsel Aggeletos is no longer her representative and that in his place she appoints Michalolias Takis. The officer of the court and the officer of the state prosecutor’s office confirmed that the room contains just them and protected witness C, that the door is closed, and that the witness has no documents in front of him apart from a Bible.

The witness testified that he was the one who proposed to beat up a 50-year-old member of KKE, in a conversation he had sometime in the beginning of July 2012. The witness also stated that he had gone many times to train with Lagos during 2012-2013, especially during weekends, when he didn’t have to go to work. Responding to a relevant question, the witness mentioned that when he first joined the Nikaia chapter, the members were Patelis, Spyros Tsakanikas, and Patelis’ wife, Nitsa, and afterwards a few more people joined such as Kostas the Frog, while the witness himself, being a member of the assault squads, had to participate in attacks due to his good physical condition, although he wasn’t a member of the special operations unit. The witness stated that he went only once to the car wash, while the members of the local chapter went there a second time. The witness then added that all the attacks carried out by the Nikaia cell in which he has taken part have been ordered by Lagos to Patelis, and that nothing went forward without the approval of Lagos.

The witness then stated that he served in the army as a soldier in the A’ Infantry Battalion in Cyprus from February to May 2010, and that they went near the shooting range in Chaidari on weekend mornings. They drove to the central road there, and then walked for about 20 minutes. The shooting range could have 600 persons and so they did not arouse any suspicion. The witness added the Scorpion handgun has burst fire, but if you know how to shoot, you know how to shoot single rounds. When asked when did he lose faith in Nazi ideology, since he has stated that Golden Dawn is a Nazi party, the witness answered that after the death of Fyssas he started reading more widely, such as the contract theory of Lenin, and his view of the world started to change.

Responding to another question, the witness stated that he testified of his own free will on October 4th, following announcements in the media. He learned that the investigator was in Evelpidon Street, he went there, asked a police officer, he told him to ask one of his colleagues, and this last person lead the witness to building 6 or 9. When he went to Evelpidon the only thing he knew before testifying was that some people had been taken into custody – a few prominent members of Golden Dawn: Kasidiaris, Panagiotaros, Michos, Lagos, and that Kasidiaris had been released. The witness denied that in 2011 and 2013 he had been seriously injured, or that he had been hospitalized for memory loss and bipolar disorder. He also stated that he was under no medication. The witness stated that he served in Lesvos for about three months, and that despite receiving training in the army he went to Chaidari because he liked it and because the goal of these meeting was training.

The witness went on to explain that he didn’t list Kasidiaris in his 2013 preliminary testimony as a weapons trainer, among other names he had mentioned, because the name hadn’t come to mind, and that now he had the opportunity to come clean about his whole activity from 2016 up to this day. The reason why he had mentioned Kasidiaris only as an ideology instructor was that his experience of Kasidiaris was mostly that of indoctrination – but now he couldn’t leave out the weapons training, since it took place. The witness described in detail the place in Vrahon Theater where they went to train, as well as the sports facilities nearby, and said that none of the people that were there on the weekends ever complained for their use of flares.

The witness went on to say that he had heard about the secret nocturnal meetings of Golden Dawn MPs from Kasidiaris’ driver, whose name is Chrysafis Gogousakis and who was an employee of OASA who had been assigned to Kasidiaris. At this point defense counsel Papadelis started shouting and asked for a recess, since he claimed that Kasidiaris never had a driver and asked to call witness Gogousakis for a cross-examination. Defense counsel Michalolias then disclosed the name of the person that the defense believes is protected witness C and accused him of being a member of ONNED and that he testified three days after he came out of treatment.

The state prosecutor proposed to overrule the motion to cross-examine the two witnesses and proposed to the defense counsels to call him as a witness for the defense. Defense counsel Papadelis insisted that the witness is lying, and called witness Gogousakis to the hearing. However, the presiding judge overruled the motion for a cross-examination because she said she would not interrupt this witness’s testimony in order to examine another, and ordered witness Gogousakis out of the courtroom, stipulating that he could come as a witness for the defense.

Responding to another question by the defense counsel, the witness stated that he is a student in a private university. Concerning the Golden Dawn memorandum of association, he stated that he saw it in the offices in Sokratous Street before 2008 but he can’t remember exactly what had happened since the incident took place 10 years before. He did admit it was the same as the one shown to him by the investigator. Responding to another question, the witness stated that he did not participate in any of the party activities during the election campaign of 2012, and that in Nikaia he was in the group of community actions which made sure that the food went to the people it was intended for, and he also was a member of the security detail. He had also participated in a motorbike protest rally in July 2012 in the greater area of Nikaia, when they also passed by Agia Varvara to make a show of strength. The witness stated that Abushelam, who was his friend in Golden Dawn and who was also a member, had told him that Kasidiaris was the commander of a group and that he had committed crimes.

Concerning the attack in Eastern Attica he said that they had assaulted a man outside the Saronida local chapter, and concerning the incident in the fish market he said it was probably the incident involving the Egyptian fishermen, between Perama and Pireaus, but he didn’t know if there were any people or police present, but he had heard with his own ears a few members of the Nikaia local chapter discussing the incident, among them Patelis, Kazantzoglou, Tsakanikas, Marios, and Papavasileiou. Furthermore, the witness stated that the “phalangist’s logic” was a term that was in use back when Androutsopoulos was a member of Golden Dawn.

Responding to a relevant question concerning the incident against PAME, the witness stated that it took place probably in September 2013, and despite the fact that he was hospitalized, he received a call from Tsakanikas on September 10th. The witness denied that he was a member of ONNED Zografou in 2009 and he doesn’t know whether Papadopoulos was hospitalized in Evaggelismos Hospital for bipolar disorder. The witness was then repeatedly questioned about the year he went to the headquarters of Golden Dawn and about his knowledge of the open times. When asked why his testimony is timestamped 22:23, and why he didn’t go in the morning or the afternoon, and how he knew that an investigator would be there waiting for him, the witness said that his decision to go to Evelpidon came after much deliberation.

Concerning Papageorgiou, the witness said that he was in the 5-member council of the Southern Suburbs office and that the witness had gone there to help with the security detail. The witness added that he met Pappas in 2009, that he has seen him twice and that they called him “brigadier general”. Concerning the occupation of Pappas and why he was in a position to help him with army matters, the witness said that Pappas is the owner of a COCO-MAT franchise and that the leading members of Golden Dawn were always on good terms with the higher echelons of the armed forces.

Concerning the food charities in Nikaia, the witness stated that he wasn’t afraid that he would be identified by an immigrant he had attacked in the past because as a rule immigrants stayed far from Golden Dawn events because they were afraid, but in any case they wouldn’t have been able to recognize him, because when he attacked him he always covered his face. Concerning the prominent members that gave speeches in the Nikaia local chapter, he can remember Lagos, Kouzilos, and Tsakanikas giving ideological lessons to the men, and Nitsa, Patelis’ wife, to the women. The witness denied having a facebook or twitter account. He went on to say that he threw away all possessions that had any relation to Golden Dawn in 2013.

The witness then answered questions about his preliminary testimony, which had mostly been already answered, saying once more that he had given only one preliminary testimony, that he went of his own free will, that he doesn’t know why the break they had during the testimony was not recorded, that he didn’t ask to be made a protected witness, neither did he dictate the order in which the questions were posed by the investigator. The witness stated that the Nikaia chapter included, apart from the groups he has already mentioned, an ecology group, a medical group, and that went there they gave them a pair of pants and a shirt, but they rest they had to order and pay for. They notified the chapter secretary, who notified Patelis, Patelis called Skordeli, and she notified Panagiotaros.