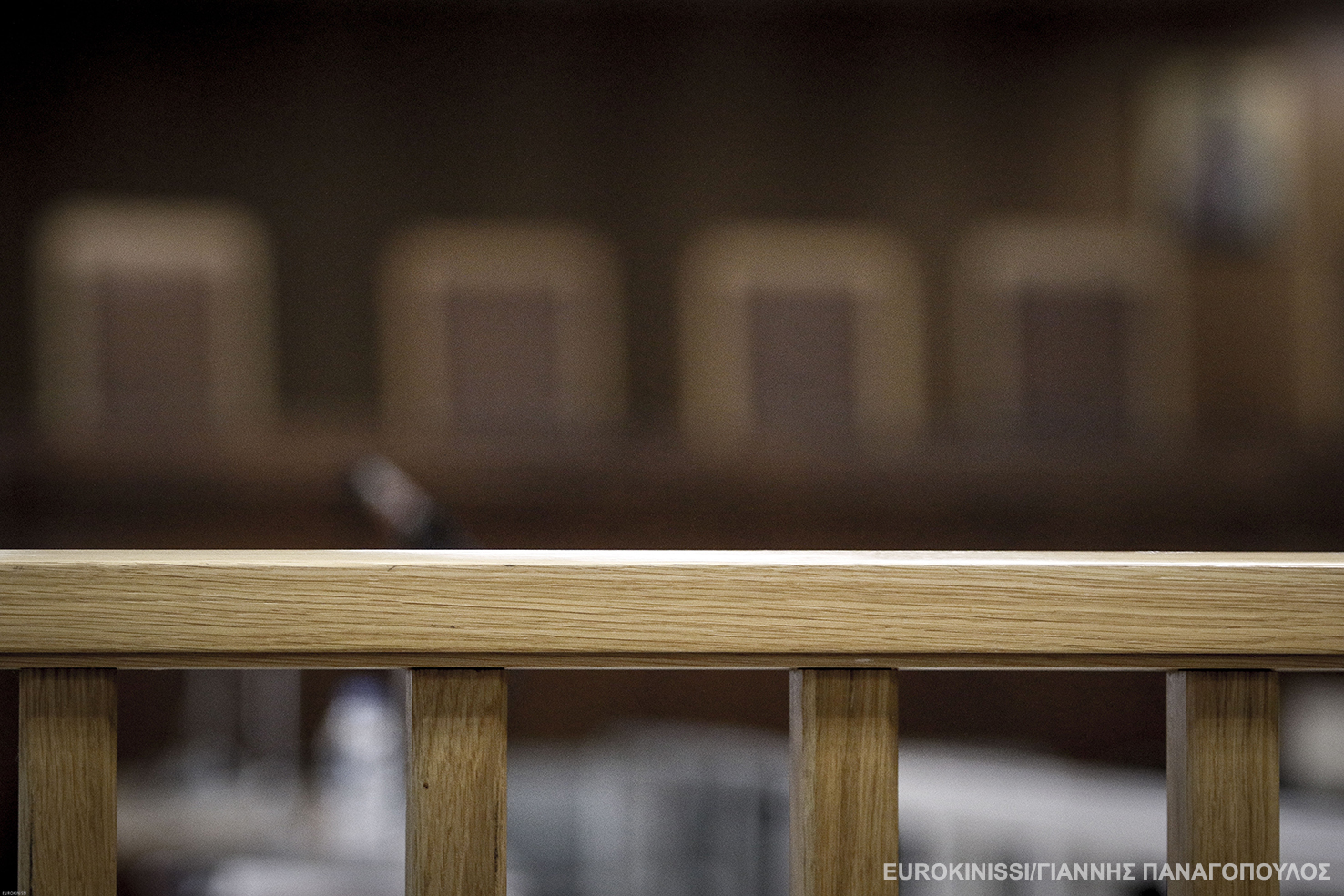 The witness works as a computer programmer. For the last 30 years he has been living in Keratsini, in an apartment block at the intersection of Panagi Tsaldari and Kefallinias streets. The entrance of the apartment block is on Kefallinias Street. His apartment is on the 2nd floor (which in effect is the 3rd floor because there’s also a mezzanine) and his balcony gives out on Panagi Tsaldari street. The ground floor has two shops, which is also the case with the ground floors of the neighboring apartment blocks. Panagi Tsaldari Street is a two-way street, with a traffic island in the middle planted with shrubs. In 2013, across the street from the corner café, were two benches. The witness stated that the lamp posts were operational and there was also ample light coming from the shop windows.

On the night of September 18th, 2013, a little before midnight, he heard a commotion, as if there was a fight on the street, and the witness went out on this balcony to see what was the matter. He saw 20-30 young men gathered on the sidewalk in the corner. They weren’t sitting in the café, but were standing outside. They were looking towards the patisserie “Katerina”, to the left and across the street from where they were standing, and some people were moving. He also saw that on the sidewalk directly under his balcony there were some people that were having a fight. There were many people in the street moving around. Next to the lamppost, outside the patisserie “Katerina”, there were three more people fighting with a tall guy and trying to hit him. As he heard later, the tall guy was P. Fyssas. The gathered crowd wasn’t trying to stop the three men that were beating up Fyssas, but were cheering them on. This went on for 3 to 5 minutes. The witness saw a police officer approaching on foot from Kefallinias Street, right under his balcony. He was coming very slowly and tentatively to the spot where the three were fighting the tall man. When he was 50 feet away he called out to them “Are you gonna stop or should I start arresting people?” Two of the three men momentarily drew back. But then they pressed in again. The witness then noticed a woman police officer approaching the spot. The three men were still hitting Fyssas and he was trying to defend himself.

At that point the witness saw on the other side of the street a car, a Toyota Almera, approaching and parking illegally. A man came out of the car –the witness later learned that this was Roupakias– who approached the patisserie shop window, where the three against the one person had ended up shoving each other. The man from the car was calm as he went near. All these people were under the balconies, and there were awnings in the way, so the witness couldn’t see. The witness then heard a man cry “they killed the lad” and saw Roupakias going back to his car – more quickly than before. He made a gesture as if he was flicking a cigarette butt. Before he reached the car, the police officers stopped him. The gathered men ran away to various directions. The witness got dressed and went down to see what was going on. A crowd had already gathered and the police had formed a barrier to keep people back. Fyssas was still alive in the arms of his girlfriend. Next to him was his father.

Initially, the witness didn’t understand that the group of men were Golden Dawners, but from what he heard later he can say that indeed they were. They wore black clothes, without Golden Dawn logos, and camo pants – some of them white camo pants. He recalled that while the commotion lasted, a few people passed by walking their dogs and the dogs started barking because they got worked up by the scuffle. The witness can’t recall the faces of any of the men that had gathered on the corner or of the three that were hitting Fyssas. He noticed someone wearing a white tracksuit, when the car arrived. He seemed to have gotten out of the car and to be heading towards Lambraki Avenue. After the stabbing, the witness heard Fyssas’ girlfriend shout at a policeman –probably the one that the witness had seen first approaching– “You were there and you didn’t do anything”.

Theodorakis, the journalist, asked to interview the witness on the things he had seen – something which he did and that’s why he was called to testify. The witness did not make a preliminary testimony, because he thought that he had nothing more to add, since the murder had taken place in front of police officers. When Fyssas was stabbed, the aforementioned police officer was standing 15 feet away.

The witness responded in turn to the questions of civil action counsels Papadopoulou, Tobatzoglou, Vrettos, Theodoropoulos, Malagaris, Kabagiannis, and Skarmeas.

The witness said that there is now a monument at the spot where Fyssas was murdered. The monument has been defaced numerous times with swastikas etc. The witness confirmed that the police officer that he saw initially was present throughout the incident. He added that he didn’t see a DIAS police unit in the area during the incident. However, immediately after the murder, they formed a barrier around Fyssas. The witness clarified that the plants on the traffic island weren’t very high, and visibility was good from either side of the street.

The witness confirmed that the place where the incident took place was well-lit. He said that someone who was in Xanthou Street would have better line of sight to the murder than himself. After the incident there were many residents of the area that said they had taken a video of the incident with their cellphones, but the witness can’t say if that’s true.

IV. Remarks on the witness testimonies under article 358 CCP

Civil action counsel Kabagiannis believes that Nikolaou’s testimony is emblematic and “final”. It showed that the murder was committed in the presence of police officers, which means that the police officers who testified that they weren’t there have committed perjury – something which must be taken into account by the Court to judge their credibility. Furthermore, the testimony showed that there were eyewitnesses who saw the incident from every angle: Nikolaou was up on the balcony, another man was in Koralli Café, the students were sitting at the benches, etc. It was also shown that the twenty gathered people were with the three and acted in concert to bring about the murder.

They clearly could see the incident unfold. The stabber himself did not act in the heat of the moment, and his sister’s claims about it have been completely debunked. As for witness Polychronidou, a police officer, she said that Pantazis and one other person were wearing Golden Dawn shirts on the night of the attack on the Egyptian fishermen, and they were later allowed to change clothes in GADA. As for witness Papageorgiou, a former member of Golden Dawn, he confirmed that this is a nationalist-socialist organization and that the patriotism spiel is a smokescreen. He discussed the leadership and the disciplinary committee, which consists of people who did not condemn violent acts but on the contrary, they committed them themselves. The witness was very careful as to where he should lay the blame.

Civil action counsel Theodoropoulos remarked that, based on the testimony of Polychronidou, it was shown that the assailants (Pantazis and Agriogiannis) were members of Golden Dawn. The testimony of witness Nikolaou, showed that no one tried to prevent the murder of Fyssas from happening, and that the gathered Golden Dawners ran away after the murder. This testimony is very valuable because it confirms the testimonies of the rest of the witnesses. The witness also confirmed that the group of 20 persons supported Roupakias. Witness Papageorgiou described a whole army in Nikaia and, concerning the murder of Fyssas, he thought that it was long overdue the way things were going.

Civil action counsel Papadopoulou pointed out that witness Nikolaou also spoke about a second man in the car, saying that it seemed to him that someone had come out of there, without having seen the exact moment. The witness confirmed the testimonies of the two student eyewitnesses. The civil action counsel discussed at length the role of the police: Apart from the two police officers, the other six of the DIAS squad arrived only after the murder had been committed. Things would have surely panned out differently if all of them had arrived on their bikes, but they didn’t want to get involved. The witness did not see the stabbing, but confirmed that the two students saw it, because of where they were sitting. Roupakias got calmly out of the car and went for the kill. The civil action counsel also discussed the testimony of witness Papageorgiou.

Civil action counsel Skarmeas, remarking on the testimony of witness Papageorgiou, said that it fully confirmed the organization’s Nazi ideology. The witness confirmed the testimonies of the two student eyewitnesses. Witness Polychronidou explained that Golden Dawn’s politics is violence, and that they wear specific shirts when they go out for their “activities”.

Defense counsel Kontovazenitis pointed out that Roupakias didn’t even try to get away, something which proves that the crime had not been planned in advance. According to the defense counsel, there were no eyewitnesses, due to distance and insufficient lighting. The counsel thinks that the testimony of witness Nikolaou is insubstantial from a judicial point of view.

Defense counsel Oplantzakis also tried to downgrade the importance of Nikolaou’s testimony, and said that he wasn’t an eyewitness. He also said that no one could have seen that Roupakias was holding a knife and that the twenty gathered people cannot be accused as accomplices. He also commented that the witness, mentioning the person in the white tracksuit, may have been voicing what journalist Theodorakis told him – who informed him about evidence in the case files.

At this point the presiding judge adjourned for February 8th, 2018, at the Court of Appeals, when the trial will proceed under article 358 CCP with the remarks on the testimonies by the defense counsels, and the start of the next phase of the trial, the documents phase.