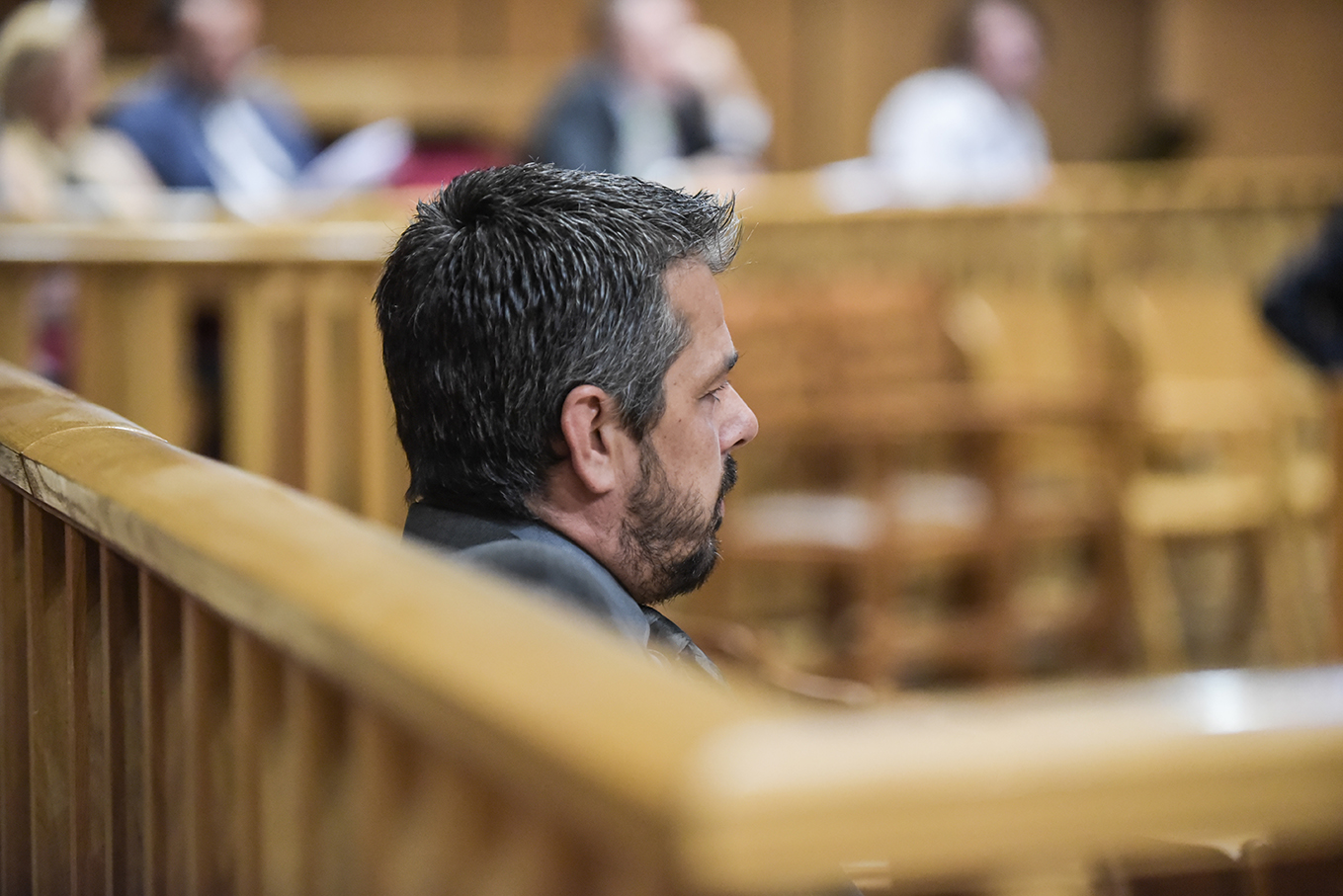 DAY 182: Use of violence for political ends

Present at the hearing was defendant Efstathios Boukouras.

The witness was examined in turn by civil action counsels Zografou, Papadeli, Michalolias P., Michalolias N., Aggeletos, Roussopoulos, Alexiadis, Pantazi, and Michalolias G. The witness stated that the local chapter of Krya Vrysi had a bulletin board on which they wrote the members’ breaches of conduct and the respective penalties. He also said that he went of his own free will to the investigators as a former member of Golden Dawn. Concerning the evidence that he had in his possession, he told his wife to gather everything that he had and to bring them to him in Athens, since their value would be judged by the authorities and not by him. He stated that when he was being indoctrinated he was being directed by the organization in every respect: ideological, political, social, everything.

Concerning the organization’s printed material, he stated that it was sold and circulated freely, apart from the material that dealt with the swearing in. The witness went on to say that his psychological distancing from the organization started when he came back to Veria during the weekends, and people told him, since he had been a candidate in the elections, that Golden Dawners are mere hooligans and buffoons due to their criminal activities, for which they commended themselves, and realized that if he stayed in Golden Dawn his social and political standing would suffer greatly in the future. Responding to a relevant question he stated that the swearing in ceremony is conspiratorial in nature and that every party has its own references, so that “in the same way that a communist has a liking for the Soviet Union, the Golden Dawner has a liking for the 3rd Reich”. The witness stated that the chant “Fascists, bastards, we will hang you from the trees” is a reminder that the fascists will end up on the receiving end of the methods used by the founder of fascism.

He went on to say that the motive for his testimony wasn’t political hatred but his desire to make known to the judicial authorities everything he knows about Golden Dawn, and to clear his conscience. Concerning Michaloliakos, he stated that he has met him in Parliament when he came to congratulate them on their work, and once more in Thessaloniki. The witness also said, about Golden Dawn’s use of language, that it is radical in the way that nationalism-socialism is radical. The witness stated that he is now firmly in the far right of the political spectrum. When Golden Dawn entered Parliament there were many new members that weren’t properly sworn in, so not everyone had been thoroughly checked regarding his ideology, however the prominent members that were being promoted as candidates for a seat in the Parliament were sure to espouse Nationalist-Socialist ideas. He also said that there are distinct factions within Golden Dawn, Strasserians, the pure admirers of Hitler, the Röhmians etc.

When asked about Boukouras, he stated that if his candidacy was supported then he is surely a Nationalist-Socialist and that the witness spent the Easter celebrations of 2013 drinking wine and singing the True Banner at Boukouras’ house, on the walls were hanging photographs of the Führer, and they were making the Nazi salute. He also said that they had taken out the NSDAP flag, the swastika flag which was the flag of Adolf Hitler’s party and concerning the Nazi salute he has said a lot about what the Golden Dawners say among themselves and what they choose to say in public. Tensions escalated in the courtroom when defense counsel Pantazi motioned to send the trial records to the district attorney to prosecute the witness for perjury, but the presiding judge reserved her judgment.

The witness went on to say that Nationalism-Socialism is the motive for the actions of Golden Dawn and that a person that can provide an illegal handgun, such as Kasapis, is a person of the criminal underworld. The witness also said that Golden Dawn claimed a few days after his testimony that the witness was facing psychiatric problems, in an article they posted on the internet. He also said that his relations with Radis, whose name he gave to the investigators as a possible witness, were thereafter nonexistent because he had given his name to the authorities, and Radis, like the witness himself, was afraid of the criminals that are now under trial.

The witness stated that he is a professor of sociology in the University of Athens and a Dean in the School of Economic and Political Sciences, and when he had been called to testify he was the president of the Hellenic Political Science Association and he has studied the behavior of political parties. Concerning Golden Dawn, the witness said that the first thing that sets it apart is the rhetoric that they use in the public sphere, which is totally unconnected with the values of the Enlightenment and Modernity. The values of modernity have been put down in international treaties and there is no rhetoric by this party that belongs to this framework. At this point the witness reminded the court of words like “subhumans”, “cockroaches”, “we’ll sink them”, that had been used by Golden Dawn MPs when they were talking about immigrants. According to the witness, this kind of rhetoric cannot be upheld by the rule of law.

Concerning Golden Dawn and its connection to militaristic political parties, the witness testified that Golden Dawn does have this military structure. He has witnessed this both on TV during the campaign period, where it was shown to have a strict hierarchy, uniform dress code, as well as in various events, and he was present at some point in Vassilissis Sofias Avenue, when Golden Dawn held a rally and showed perfectly what a militia is, which is fully in accordance with the military structure. In short, Golden Dawn is party that has been organized along a military-style structure and uses violence for its own political ends. The witness did not use the term violence lightly but he draws it from the relevant literature, which uses empiric data and confirms that this is the main characteristic of this organization. The use of violence for its political ends. This doesn’t mean that they don’t have different types of activities, but all the others are secondary. Outside of Greece, the witness said that there exist such parties, but of a smaller scale, and they aren’t in Parliament, in Germany, in Poland, Hungary, or the Baltic States.

The witness also noted that one aspect of political parties are the financial resources. Laws are in place to deal with this aspect, and in the United States it is a major issue of contention and they always examine where the parties’ funds come from. His sense in 2013 was that the multifarious activities of Golden Dawn (local chapters, events, a newspaper) could not have been supported only with the earnings of its members and MPs. Neither could it be maintained without state funding, so this issue should be examined in more depth.

Responding to a relevant question, the witness stated that militia parties have a few specific traits, whom he identified in the rallies of Meligalas and Thermopylae and he can draw the conclusion that this party and its rhetoric belong to the militia parties. Violence in this ideology is the tool to effect political goals. The organizational structures of all parties are totally in accordance [with their respective ideologies]. It’s impossible to have one ideology and a different political agenda.

Responding to a relevant question the witness stated that Golden Dawn espouses the same ideology as the fascist party of Germany, and fascist party of Mussolini, and, mutatis mutandis, they have an identical structure and ideology. Concerning the assault squads he said that they arrive dressed uniformly and wearing camo pants.

They form ranks, they obey orders given by specific commanders, and the witness gave the example of the rally in Meligalas, where the incident had all the trappings of an assault squad. Concerning the assuming of the political responsibility by the leader of Golden Dawn for the murder of Pavlos Fyssas, the witness said that there were many such declarations in the Interwar period, during or after the committing of such actions by members of the militia parties and the assault squads.

The witness also said that the use of symbols is an element of its rhetoric. There are specific symbols, colors, and music which illustrate the ideological and political direction. Especially after the murder of Fyssas, they tried to expunge these symbols. Concerning the flag of Golden Dawn the witness said that it alludes to nazism and the fascism of the 20’s and 30’s.