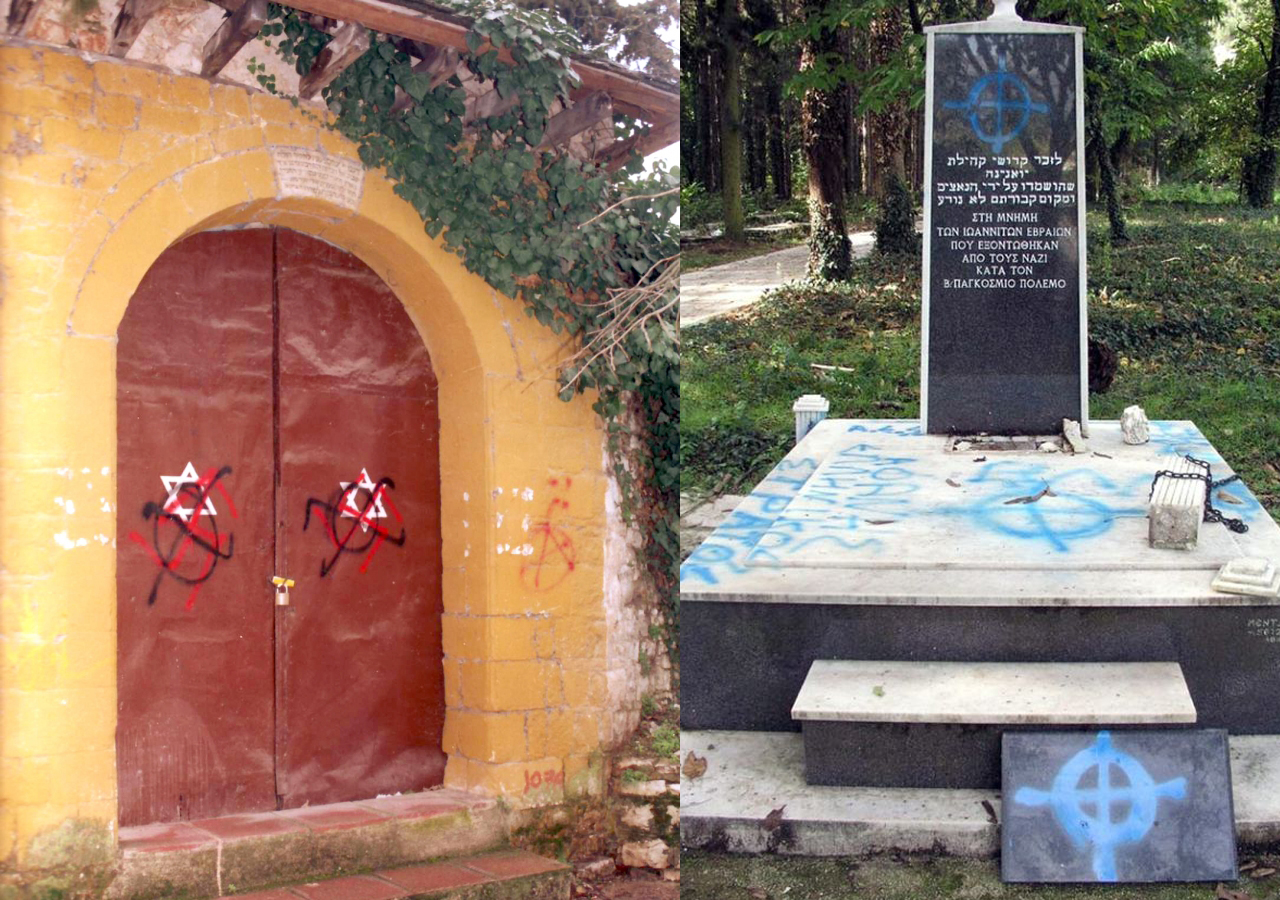 DAY 178: “THEY HAD SENT THEM TO SOME BEAUTIFUL FIELDS WITH PINK CHIMNEYS… HE MEANT AUSCHWITZ”

Present at the hearing was only E. Boukouras (he stayed only during the hearing testimony of E. Andrianakos).

The witness is a retired employee of the farmer’s co-op of Ioannina and a contributor of the Ioannina newspaper “Ipirotikos Agonas” [:Epirotic Struggle]. His interests lie in the atrocities committed in the Ioannina area by the Germans during the occupation of Greece. He has filed a dossier with the relevant state prosecutor in Germany as well as the Greek Parliament, containing proof of these atrocities in order to pressure for war restitutions. Following the murder of P. Fyssas the witness contacted of his own volition the district attorney in the Supreme Court, to file a dossier containing material of his own research.

The first vandalisms in Ioannina took place in 2002, on four or five 5th-century burial monuments in the Hebrew cemetery. The witness was informed about it from the press. It was an unprecedented incident in the area. The police made some inquiries but eventually they decided it was an isolated incident and the case was closed. The next year, in 2003, six or seven burial monuments were vandalized. They also vandalized the memorial of the Ioannina Jews that perished in the Holocaust. The perpetrators damaged a few parts of the monument and sprayed on the base the Celtic cross and the slogan “Long live the Greek Army”. According to the witness, the Celtic cross is the logo of Golden Dawn. He pointed out that he has deposited relevant photos to the office of the state prosecutor in the Supreme Court. The police inquiry came to nothing. Later, they drew the Thule swastika at the entrance of the cemetery. They also held a pagan ritual using the blood of a turtle they killed. The last incident was the drawing of swastikas outside the synagogue last year.

From 2002 to 2009 a total of ten vandalisms were recorded in the Hebrew cemetery. The local authorities were in uproar and issued statements and resolutions of support to the Ioannina Jews. However, the police failed to assign a guard to the cemetery.

Furthermore, on the celebration for the anniversary of the battle in Vitsi-Grammos appeared a “potential assault squad of Golden Dawn – that’s what their appearance and behavior signified”. Another time a “squad” from Athens had come from Athens to commemorate the independence of Epirus in 1914. However, none of the town authorities desired to host such a commemoration, to preserve the good relations with Albania. Students from the University and other residents of the city reacted by throwing rocks at them. The event was canceled. The witness referred to another incident in Kakavia, where Pappas and other members of Golden Dawn blocked the Greek-Albanian border station in order to commemorate the anniversary of independence and shouted slogans about going to Premeti and conquer it for Greece. The witness conversed with some Epirots of Albania who did not approve of what happened.

The witness attributes the aforementioned vandalisms to Golden Dawn. He bases this assumption to the fact that in 2013 they had once more spray-painted slogans in the Hebrew cemetery of Ioannina, with the Celtic cross and next to it the slogan “Hail Golden Dawn”. The witness stated that Golden Dawn doesn’t have a local chapter in Ioannina, but it has a [local] website since 2003. The website was later adorned with a meander, along with the names and addresses of the leaders of the Ioannina cells etc. A second Golden Dawn website was later opened with photographs, conferences etc. In one of the photographs the members can clearly be seen giving the Nazi salute.

According to the witness it’s unbelievable that the police hasn’t been able to find the persons responsible for the vandalisms. The Jewish community in Ioannina numbers about 40 people, participates in the social goings-on of the town, and has no enemies. He also pointed out that, at the time when the vandalisms took place in Ioannina, Pappas was a resident of the town and kept a bedclothes shop etc. According to the witness, as far as Pappas is concerned, “we all know he is the second-in-command of Golden Dawn” from periodicals, pamphlets etc. The witness noted that Jews are a target of Golden Dawn and that Michaloliakos had said that “they had sent them to beautiful fields with nice pink chimneys… He meant Auschwitz”.

The witness was questioned by following defense counsels, in the order they are mentioned: Dimitrakopoulos, Tsagas, Zografos, Michalolias (N.), Michalolias (G.), Roussopoulos, and Papadellis.

The witness is an employee at a company and a resident of Veria [:a town in the north of the country]. She knows Ilias Stavrou [:a witness who will testify at a later hearing] since 2004. They have been together since 2010 and married since 2013.

According to the witness the witness was a supporter of Golden Dawn since 2005, when he was a student of the Law School in the Aristotelian University of Thessaloniki, and a member of the party since 2011. The witness has no connection with Golden Dawn. She never wanted to become a member and her husband never pressed her to do so. The witness had heard in the Golden Dawn offices that they want to bring about a national-socialist state though violent means, “by killing all blacks and Pakistanis”. Stavrou had the same views, until he had a change of heart and decided to quit Golden Dawn.

Stavrou was on the ballot of Golden Dawn in Imathia in 2012, but he was not elected. In July 2012, after the elections, he was called by Kasidiaris and went to Athens as a consultant for Zisimopoulos in the Greek Parliament. In June 2013, “he asked to leave but they didn’t let him”. The witness knows that his resignation was not accepted. The witness testified that Stavrou had showed her a text message from Ourania Michaloliakou, which informed him that his resignation had not been accepted by her father. Since Stavrou told them that he wanted to leave the ranks of Golden Dawn, he received death threats. For this reason, Stavrou remained in the position he held up to December 2013.

Stavrou had told the witness that he wanted to quit because they had framed him with a woman with whom he had not been intimate with. She also said that at the time she wasn’t married to him. A year later, the witness heard Stavrou tell their friends that he left Golden Dawn because he didn’t like what he saw and heard there. He had told her that his connection to the party had been severed. The witness stated that she doesn’t know any other details, since her husband didn’t want her to know and told her that he will testify everything in court.

The witness pointed out that since Stavrou informed her that he wanted to quit Golden Dawn, the Golden Dawners told everyone he was crazy. Up to 2015 there were many people, from work or family, whether Stavrou had mental health problems. In the offices of Golden Dawn a rumor circulated that “he had been kicked out of Golden Dawn and his job because of mental health problems”. When Stavrou first came back to Veria he was very scared. However, after his first testimony in 2013, he calmed down and now he’s much better.

According to the witness, the stance of Golden Dawn on the immigrant issue etc. reflects on its supporters, too. When asked about the reason why the leader of Golden Dawn did not accept Stavrou’s resignation, if he truly had mental health problems, she said that there is no way to explain it. She also explained that Stavrou chose to testify officially because “he can’t stand being at home and scared to go out”.

The witness was questioned by the following defense counsels, in the order they are mentioned: Dimitrakopoulos, Tsagas, Zografos, Michalolias (N.), Papadellis, Michalolias (G.), and Roussopoulos.

Among other things, the witness stated that Stavrou was an admirer of Hitler. She had no problem with all this, because her husband had never told her that they would kill all the blacks – something that she heard in the local chapter of Golden Dawn. She went on to explain that the Imathia chapter of Golden Dawn opened its offices in Pella, because the anarchists wouldn’t let them open it in Veroia. From June 2013 Stavrou went to his job at the Greek Parliament in unkempt clothes, unshaven – because they wouldn’t let him quit Golden Dawn and because they couldn’t well let their consultant work while looking like this. The witness explained that, even though the leadership of Golden Dawn was jailed in September 2013, her husband quit his job in December 2013 because he was receiving death threats.

The presiding judge adjourned for September 14th, 2017, at the Women’s Wing of the Korydallos Prison, when witnesses Ioannis Souliotis and Michail Spourdalakis are expected to testify.