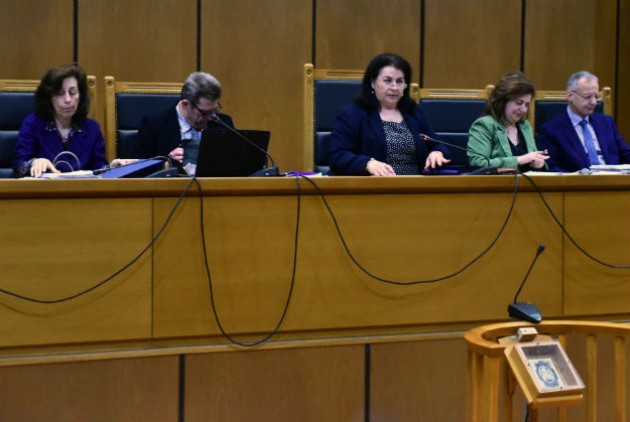 DAY 155: “THEY WERE PROUD AND COULD TALK ABOUT THE CREMATORIA OF AUSCHWITZ”

Defense counsel Velentza made some brief observations concerning the testimonies of witnesses Frangomichelakis, Ch. Antiochou, Troulou, Mavridis, and Alivizatos. Concerning the testimony of witness Alivizatos she said it was characterized by the word “vagueness”. The defense counsel stated that he didn’t testify about any real incident, and limited himself to what he has heard on the media and to personal judgments.

Defense counsel Michalolias G. commented on the witness testimonies of Antiochou, Fragomichelakis, Pantagakis, Mourkogiannis, Papazisis, Troulou, Mavridis, Alivizatos, and Andreopoulos. Concerning the incident at the Hotel Belvedere the defense counsel believes that the Golden Dawners “were labeled an assault squad when the opposite side was the one that was holding clubs, beams, and helmets”. As for the Missolonghi case, the defense counsel stated that the trial in question “will be remembered as the trial of the street fruit markets”, saying that it is not possible that the defendants on the one hand are members of a criminal organization and on the other hand want to supplant the rule of law by impersonating authority. The defense counsel supported that defendant Michos wasn’t wearing a shirt during the riots in Paros, as testified by witness Troulou, but dark clothes. Concerning the testimony by witness Alivizatos, the defense counsel stated that its evidential value does not accrue from his profession, but at present he limited himself to judgments about a criminal organization, using mainly the argument that the Golden Dawn MPs were ready to resign in order to bring about a new election. As for the theory of the three concentric circles, the defense counsel said that Alivizatos “continues to confuse the political party with the criminal organization”.

Defense counsel N. Michalolias commented on witness testimonies of Alivizatos, Troulou, and Tsakanikas. He wondered where did Alivizatos find the courage to come to the witness stand, since “his examination showed that his knowledge […] was insufficient”. He added that Alivizatos’ theory about concentric circles serves the connection of the indictment to the evidence. The defense counsel stated that the court on the one hand is dealing with the accusation of a criminal organization, and on the other hand with the aforementioned testimonies about New Year’s Cake events, and the result from the witness testimonies is the severing of the penal connection.

Responding to questions by the members of the court, the witness stated that in 2012 he was the police colonel in Messinia and he is now retired with the rank of police major general. In 2012 there was a spike in small-time crime (theft of produce, agricultural implements, etc.) especially from the Roma in the area. At the time the witness had given an interview to the regional newspaper Eleftheria, as is customary for police colonels. He had been asked about safeguarding militias formed by civilians, which substitute the work of the police. The witness had then answered that the safeguarding of the community is the duty of the police. In court he testified that there never were any militias and that in that event the police would have reacted operationally.

The witness is not acquainted with Fotios Bellos, a retired police officer and a Golden Dawn candidate, who spoke about assault squads in one of his articles. The witness and his colleagues did not think the relevant call as something worthy of further measures. He made some inquiries to the Police Precinct of Meligalas, the area where Bellos resided, and they told him that he should not worry and that Bellos is seen as something of a character. Bellos had spoken derisively about the police as a whole and about the witness in particular. Finally, the witness hasn’t heard about any incidents involving Golden Dawn members in his jurisdiction.

Responding to questions by civil action counsel Zafeiriou, the witness clarified that the activity of assault squads cannot be labeled as something of a joke. He made a distinction between safeguarding militias and assault squads. Responding to questions by civil action counsel Theodoropoulos, the witness said that, from what he’s seen on TV, Bellos is pending trial for murder, and that as a result he does not believe him something of a joke, but a dangerous man. The witness believes that the letter that Bellos sent to the newspaper Eleftheria was a personal act of the former and was not representative of Golden Dawn in general.

As for the events in Meligalas in September 15th, 2013, the witness could not recall any details or the legal procedure. He reported that the state prosecutor had been informed at the time. The witness testified that no police units were present at the event, but they remained at a distance, since it wasn’t judged necessary to have police officers at the place of the event.

Responding to questions by civil action counsel Kabagiannis about whether it was one of his duties to read the papers every morning, the witness answered in the affirmative. He did not recall any articles in the press concerning charges brought against companies that were employing immigrants. He also called illegal the inspection of ID cards by civilians.

The witness testified that he believes that the article of Bellos that was published was a letter of his and not an interview. Furthermore, he said that a residents’ steering committee is not the same as an assault squad. The witness cleared up that the civilians that were complaining and saying that something should be done about the small-time crime did not belong to a particular political party. When asked by defense counsel Roussopoulos if he has seen [on TV] a march of armed people in Exarcheia and if he has heard of a “KEP of anarchists”, the witness answered in the negative. The witness also answered in the negative when asked whether the MPs elected in Messinia are in communication with the local police colonels. The witness testified that since he had become a police colonel in Messinia, in 2011, there were some residents protesting about the low-level crimes that he spoke of earlier. He also clarified that the police officers are not in direct communications with MPs, when the latter submit a question to Parliament about their remit, but they are notified and respond through administrative channels.

The witness works as a cameraman and director. The film that brought him to the witness stand is titled “The Cleaners”. It is his thesis, which he submitted in 2012 to the National Film and Television School of Great Britain (NFTS), where he was a student at the time. The witness was awarded for his 37-minute-long documentary, which was hailed as the best student movie of the year, and was screened both in Greece and internationally. The equipment that the witness used for the shooting of his documentary was given to him by NFTS. He chose the subject because it was constantly in the news at the time (2012).

The witness had initially visited the headquarters of Golden Dawn, in Deligianni Street, a month and a half before the election of 2012. Until then he didn’t know anyone from Golden Dawn. It was there that he met Panagiotaros and Lyris. He submitted to them a written application to shoot a documentary –a film of observation, not commentary– and asked them if they were willing to participate. They didn’t understand what the witness aimed to do and he described for them a few scenes, for example their leader reading some of his poems. Panagiotaros was thrilled by the idea. When asked about his purpose, the witness told them that he was making the film for his school, that there wouldn’t be any commentary, just observation. The witness added that at the time it was easy to gain access to Golden Dawn because it was the first time in its history that it was leaving the margins of society.

The aforementioned members, after discussing it for half an hour, told him that they would relay his proposal to Michaloliakos. The Golden Dawners showed an initial enthusiasm, however, because of the period –right before the election– the witness did not succeed. Michaloliakos himself told the witness, “Kostas your idea is very good, but another time, now we have the election ahead of us”. They didn’t deny his request based on ideological differences, but because the leading members of Golden Dawn did not have the time. They accepted his presence in their headquarters, and Kasidiaris had once joked when he saw him “Let England pass”.

The witness decided to visit the Agios Panteleimonas area to find the low-level members of the party in the quarter. The first thing that he noticed when he got to the square of Agios Panteleimonas was a huge graffiti that read “Immigrants get out of Greece”. Then he started meeting the characters of the neighborhood. He had done some social studies, so he was interested in their social behavior. He stayed in the square morning, afternoon, and evening for a month straight. He met with G. Vathis, who was “overseeing” the square. Vathis had some power in the area, which followed from the connection he had with Golden Dawn, so no one would bother him, and he even acted in place of the police. The witness testified that “there was constant bullying. He hurled insults, especially to immigrants, which looked undeniably like immigrants. To ideological enemies, to people that dared to speak up in the streets. And there weren’t many of them”. The witness came into contact with Vathis, A. Plomaritis (a member of the Central Committee and a Golden Dawn candidate in the electoral district of B’ Athens), I. Batzis (a candidate in Patras), along with many other members. Vathis was very enthusiastic about the documentary.

The witness explained that those that appeared in the documentary were in agreement with him filming them. The witness went on to describe an incident where some police officers thought they were getting filmed and when they protested Vathis talked to them and they left. According to the witness, the Golden Dawners enjoyed a kind of immunity as regards their bullying, threats, and insults: “They thought they were calling the shots, that no one could touch them, they were proud and they could talk about the crematoria of Auschwitz”.

At the time, Golden Dawn was in an extrovert phase and thought that the documentary was an opportunity to “show their drive to the world at large, become more appealing to a particular target group, and exhibit their ideas”. Then they reacted because they judged that this image wasn’t making them look good anymore. The highest levels of Golden Dawn reacted, for example Michaloliakos himself in an interview he gave to a regional TV channel connected him with foreign power centers, Jews, etc. and stated that there will be repercussions. Two separate charges were brought against him for filming with a concealed camera, without the consent of the depicted Golden Dawn members. These complaints were later shelved.

The presiding judge adjourned for May 23rd, 2017, at the Women’s Wing of the Korydallos Prison, when witness K. Georgousis will be examined by the civil action and defense counsels.