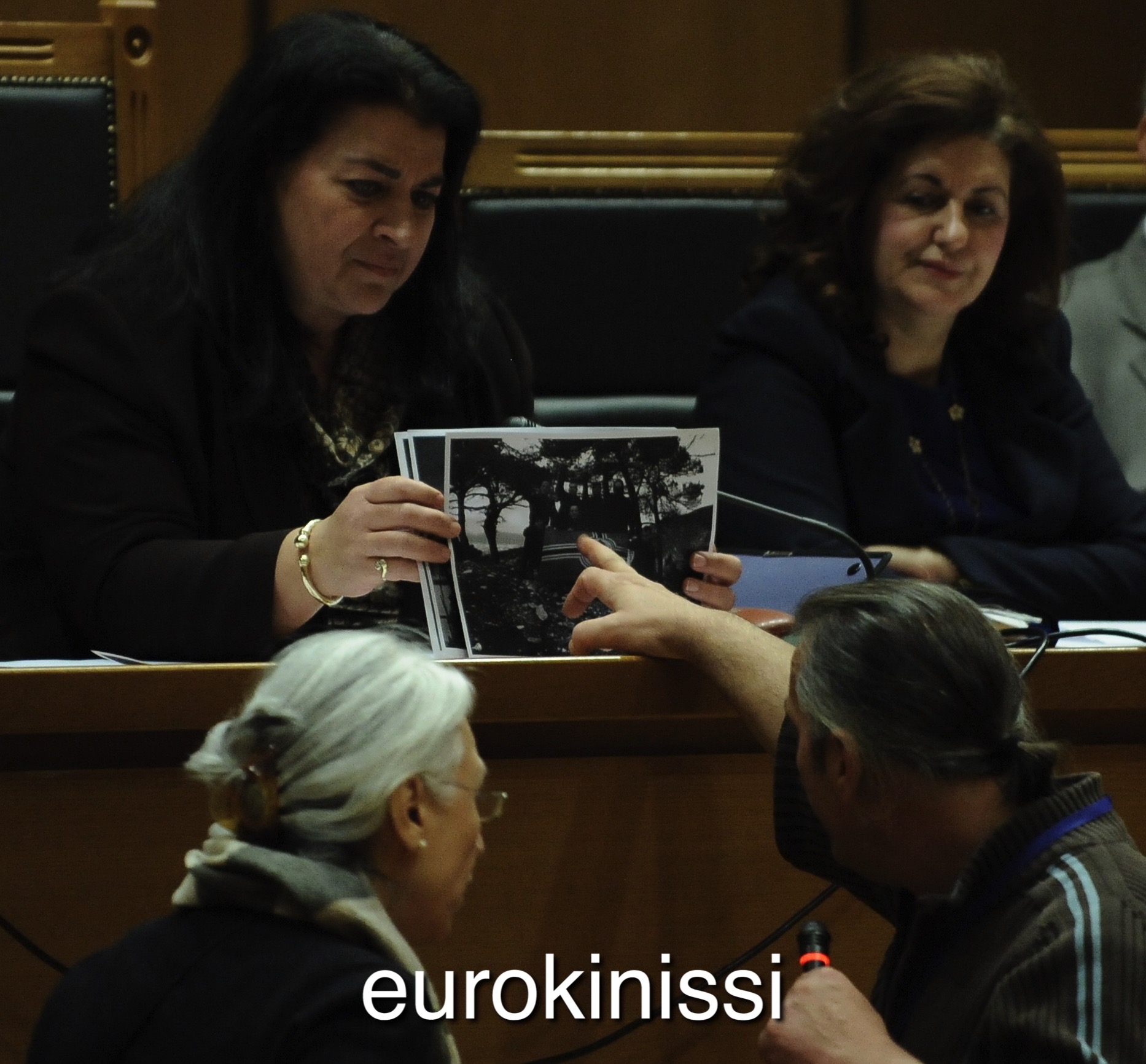 The courtroom remains open to the public upon presentation of a state ID card, which is retained by court authorities for the duration of the session. There were journalists and a number of spectators present in the courtroom.

At the start of the proceedings there were only two (2) defendants present, I. Kastrinos and I.-V. Komianos.

Examination of witness and plaintiff Michail Vaxevanis by the court.

The witness testified that he works as a welder in the Perama Shipping Yards [S/Y] since 2000. He is a member of the Metalworkers’ Union administrative council and for the years 2012-2014 he served as its Second Vice-President. The witness stated that the union numbers about 8,000 members, of which about 4,000 are active.

On September 12th, 2013, at about 22:30, the witness with a few colleagues, members of KKE (of which he is also a member) and friends, 20 people all in all, gathered in the S/Y to put up posters about the upcoming festival of KNE. They rode in three cars and 3-4 motorbikes (one of which was the witness’s own) and they made 4-5 stops in total. The last stop was outside the Papilas shipping yard, around 00:00. The witness and his colleagues had been at this spot for about 3 minutes when they saw two groups approaching them, consisting of about 20-25 persons each. Almost everyone in the two groups was holding some kind of wooden bat or club. He noted that 5-7 people were wearing helmets and holding big clubs with metal protrusions added at the end.

A few of these had covered the lower half of their faces with the collars of their t-shirts, but their eyes were still showing. The two groups marched towards the PAME members and merged, in the process encircling them. It was impossible for them to escape. At that point the witness heard 2-3 of them shout “Where’s Poulikogiannis?” One of the two leaders was Chatzidakis, whom the witness recognized because he knew him from before, when the union had made an intervention at a workplace. The other one was Pantazis “the balloon man”, whom the witness recognized on sight, even though they hadn’t been acquainted. He had heard that he had participated in the attack against the Egyptian fishermen. These two persons weren’t wearing helmets or carrying weapons.

The people at the rear of the -by now merged- groups that had encircled the PAME members were shouting and swearing at them. Then, the two leaders, Chatzidakis and Pantazis, speaking on behalf of the rest said, “get lost because now it’s us, Golden Dawn, that call the shots around here”. They weren’t asking of the PAME members to depart from the scene of the attack, but from the S/Y in general, because they were bothered by the union activity. Lagos [:a Golden Dawn MP] had made some statements on the matter a while back.

The PAME members got close together. The witness was standing three feet behind Poulikogiannis and could see the leaders of the group, Pantazis, Chatzidakis, and Antonakopoulos -whom he knew as a colleague-, who pushed and swore at him. At that point the attack commenced. The witness didn’t hear an order given. He managed to avoid a hit to the head, however he suffered a hit on the elbow and another on the shoulder blade. While trying to turn around he saw Poulikogiannis on the ground drenched in blood, blood gushing from his head, lying there like he was dead. The witness did not see -neither does he rule out the possibility- whether Poulikogiannis was hit by a club with metal protrusions. The witness fell on top of him to protect him and tried to drag him away from further blows. Poulikogiannis was out of it, he was babbling “why are you hitting us?” until he fainted. The blows now fell upon the cars. The witness then heard someone say “Those from Perama this way…”, probably Chatzidakis. The assailants threw stones and wooden beams and left the scene of the attack. It was around that time that Poulikogiannis regained consciousness.

Poulikogiannis was the assailants’ primary target, being the president of the union. As he was laying down drenched in blood, the assailants didn’t know whether they had killed him or not. If he had been murdered, the union would still exist, since he would have been replaced, but the ship workers would be working in a climate of terror.

The attack lasted about 5-6’ during which no cars passed – the flow of traffic had been cut off by Golden Dawn members, as the witness later learned. The ambulance arrived about 5’ later and collected those with more serious wounds, six persons in all. The witness was taken to the hospital by one of his comrades. The witness stated that before the attack commenced he saw about 50 m away four white helmets, which must have been a DIAS team who “did nothing, they just sat and watched”. After the attack a police force arrived on the scene.

According to the witness the attack had been planned in advance and the assailants had deadly intent, since the PAME members had been trapped by an assault squad which stated it was Golden Dawn, carried unusual weaponry, and aimed for the head. As the witness said, “they were out for blood”. The motive behind the attack was “to rid the S/Y of communists. It’s been clear since 8/8. To get rid of the ‘abscess’ of KKE”. According to the witness, some of the employers at the S/Y started an indictment “assembly line” against the union, to promote cheaper labor. Some of them are still pending, some went to trial and the union members were found innocent. Golden Dawn founded its own union, “Agios Nikolaos”, which is active, but has few members and does not pressure the employers – contrary to the Piraeus Metalworkers Union, which has won many battles against the employers.

4. Examination of witness and plaintiff Michail Vaxevanis by the civil action counsels

The witness was examined by the civil action counsels in the following order: Strati, Sapountzakis, Malagaris, Zafeiriou, Antanasiotis, Vrettos, Theodoropoulos, Kougiatsou, Christodoulou, Tobatzoglou, Kabagiannis, and Papadakis. More specifically, he gave some clarifications concerning what he said during his examination by the court.

According to the witness there were 9 wounded, and more could have been seriously injured, apart from Poulikogiannis, such as Zymaris and Diamantakis, or even killed. The clubs that the assailants were carrying “cannot be bought at the store. They were made to kill.” The witness said that when he said during the preliminary testimony that the assailants had “scaled down”, he meant that the attackers saw Poulikogiannis on the ground and thought they had succeeded in their goal, and given the time that had elapsed from the start of the incident, left the scene.

Civil action counsel Zafeiriou showed the witness some photographs. Defense counsel Velentza protested as to the purpose of showing photographs, and defense counsel Roussopoulos objected, requesting that the civil action counsels mention the photographs’ sources and dates. The witness went on to say that he knew that the photographs in question depicted leading members of Golden Dawn (Michaloliakos, Kasidiaris, Pappas, etc.) giving a Nazi salute and bearing tattoos with Nazi symbols. The witness was asked about the assault squads, at which point tension was caused by defense counsel Velentza and the court was recessed for some time.

The witness went on to comment on the motives behind the attack and its consequences on the union’s activity, as well as the fear it caused. He also referred to the sms messages sent by Lagos concerning the attack, and to relevant statements he had made about the S/Y and the union. The witness believes that Golden Dawn covered up the attack and rewarded the perpetrators, issuing a press release the following day that said the incident never happened and had been fabricated.

The witness was a co-worker of Pavlos Fyssas and knew him from the union, and as an artist. Responding to a question by civil action counsel Kougiatsou the witness said that “he was a young man, full of life, creativity, intelligence, he had the power and the will to live”. The witness mentioned other incidents -which also took place under cover of night-, such as the murder of P. Fyssas, the attack against the Egyptian fishermen, and the murder of Shahzad Luqman.

The witness believes that the fact that the union issued a press release in June 2012 prevented the members of Golden Dawn from committing criminal offenses against them until September 2013. He commented on the Fuhrer Principle and the assault squads, that “they have a liquidating role. They come to clean up.”

5. Examination of witness and plaintiff Michail Vaxevanis by the defense counsels

The witness was examined by defense counsel Alygizakis concerning Antonakopoulos and Chatzidakis. The witness didn’t know whether they were members of Golden Dawn. He went on to talk about their role during the attack, and about certain points that had been stated differently during the preliminary testimonies, providing explanations for the discrepancies.

The witness was questioned by defense counsel Anastasopoulou whether he would have recognized Kastrinos if he had seen him during the attack. The witness answered in the affirmative although he hadn’t noticed whether the defendant was present at the attack.

At this point the hearing was adjourned for Thursday, December 1st, 2016, when the witness’s cross-examination by the defense counsels will continue.