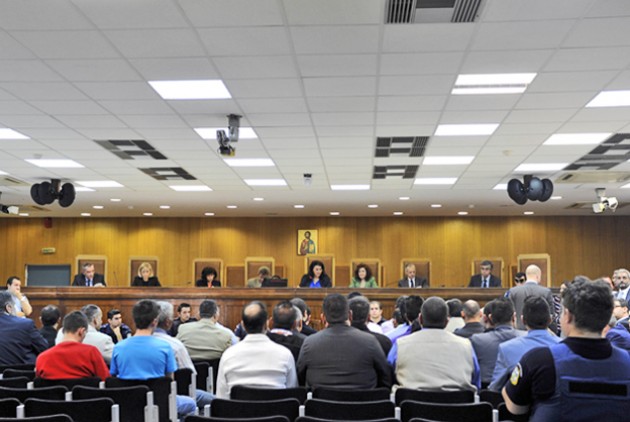 The same conditions applied at today’s hearing as at previous sittings. Entry to the room purportedly designed for the trial was limited to witnesses, accredited journalists and photographers. It remains impossible for the general public to attend the trial unless they have been granted special permits.

Seventeen defendants, most of whom are in custody, were present. The remaining defendants were, for the most part, represented by their counsel. Andreas Tzelis, counsel for the Fyssas family, requested that the court comply with regulations and require defendants to sit not where they wished but in the order in which their names were called out so as to prevent them exchanging signs and gestures during the hearing.

Giorgos Roupekas, counsel for Giorgos Roupakias, who stands accused of Pavlos Fyssas’ murder, was absent from the hearing. The presiding judge asked the defence counsel if any of them wished to take their colleague’s place for the day but was met with silence. Only after a momentary pause to the proceedings, during which the defendant communicated with his lawyer, did Mr Sotiropoulos (counsel to Ioannis Aggos) announce that he would stand in for Mr Roupekas. [Note that in recent hearings no mention has been made of the alleged death of Antonis Boletis, which has yet to be confirmed.]

3. Defence counsel continues its rejoinder on the subject of civil action

Vasilis Kapernaros, counsel to Nikolaos Kouzilos, took the floor and asked that the term “assassination” not be used during the trial. He pointed out that the term is not part of the law; the criminal code makes provisions for either (premeditated and intentional) homicide or (reckless) manslaughter, but not for “assassination”. His statement led to commotion in the room and the presiding judge tried to recall the court to order. “They planned it!” shouted Pavlos Fyssas’s father, to which Mr Kapernaros responded that while family members may have the right to use the term, lawyers should not. He proceeded to submit a decision to the court, which he claimed was based on the same irrevocable indictment submitted by the other side, to support his argument that civil parties should not be allowed participate in any proceedings involving his client. He added that cases of indirect damage, such as that attributed to his client, do not warrant compensation and do not provide grounds for the participation of civil parties. He then cited examples from case law.

Following Mr Kapernaros’s statement, the floor was handed over to Panagiotis Michalolias, counsel for Golden Dawn leader Nikos Michaloliakos, who raised an argument unrelated to the matter of civil parties: an unpublished decision of the Athens Criminal Appeals Court, relating to another trial in which an Appeals Court judge, Nikos Salatas, and Kostas Papadakis (counsel to Abouzid Embarak) participated. He concluded that this prosecution was politically motivated.

Following his statement, Mr Alexopoulos submitted his rejoinder on behalf of his client, Christos Pappas. He argued that the charges of arms possession and violation of the law on antiquities (not, however, of those of participating in a criminal organisation) brought against his client are groundless.

Following this, the presiding judge called a one-hour break. She returned with the decision regarding the civil action.

4. Decision on the participation of civil parties

b. To accept the PAME trade unionists as civil parties against four of the accused (Anastasios Pantazis, Ioannis Kastrinos, Christos Chatzidakis and Kyriakos Antonakopoulos). The civil action relates to charges both of attempted murder and of participating in the criminal organisation Golden Dawn. One PAME member was recognised as a civil party in charges relating to damage to his property.

d. To accept Abdou Hamet Ahmet as a civil party against Thomas Marias, Markos Evgenikos, Dimitris Agriogannis and Konstantinos Papadopoulos. The civil action relates to charges of disturbing the domestic peace and of inflicting damage to Mr Ahmet’s car. Anastasios Pantazis will face civil action on charges of causing damage but not on charges of disturbing the domestic peace. The presiding judge ruled against Mr Ahmet’s application to be a civil party against the other defendants.

5. Suspension of the proceedings due to the referendum

The presiding judge accepted a request that hearings not be held on days around the 5 July referendum and postponed the next hearing to 9 July, when she will begin examining witnesses, beginning with Panagiotis Fyssas, Magdalini Fyssa and Irini Fyssa.

6. Procedural requests from the civil parties

The civil parties asked the court to make the following provisions in order to facilitate the proceedings:

b) To change the trial venue. Here the presiding judge interjected that this was beyond the power of the court

c) To allow for radio and television coverage of the trial, which can be legally permitted in exceptional circumstances or if the coverage serves the public interest

d) To make audiovisual equipment available to the civil action counsel. Given the majority of the documents relating to the trail consists of video and photographs, this would speed up the proceedings and provide a better overview of the trail. Civil parties quoted precedent (the trial of former finance minister George Papaconstantinou)

The prosecutor and the defence counsel did not comment on the requests.