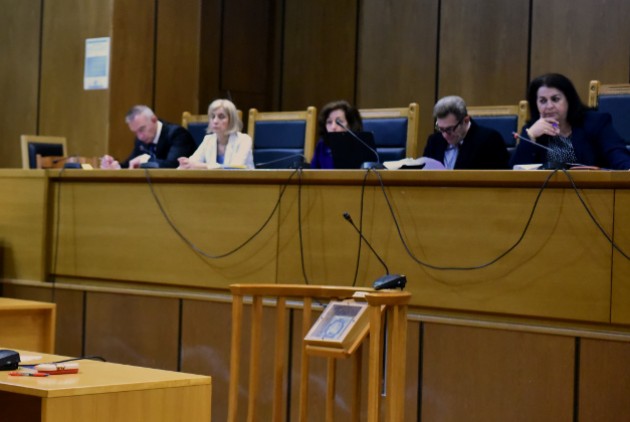 The courtroom remains open to the public upon presentation of a state ID card, which is retained by court authorities for the duration of the session, until all audience seats in the courtroom are filled. Few members of the press attended the hearing, and there was the expected number of members of the public and police officers.

The witness stated that he is the mayor of the Municipality of Evrotas, whose seat is at Skala Lakonias, from 2006 up to now. The area is mainly agricultural, numbers about 3,000 residents, and the last few years, because of the financial crisis, there are immigrants and many Roma that are working as temporary agricultural workers. The Greeks are about 3,000, the immigrants 800, and the Roma about 200. The witness said that they never had any problems with the immigrants or the Roma, and specifically for the Roma he said that they have been staying for many years in Skala and that they are an indispensable part of the community, and that not only do they not cause problems, but volunteer to help the municipality when the need arises. Concerning the immigrants, he said there was a spike in malaria incidents in 2010, because preventive checks had stopped, something that caused some strains in the community, but the necessary measures were taken and the incidents have since fallen to zero. He also said that he had communicated with the Ministries of Health and Public Order, so that these people could obtain legal residence papers and be able to work legally, in order to avoid cases of exploitation from the employers in the area, and to avoid their piling up in houses with bad sanitary conditions, something which would further compromise public health. He was also in communication with the International Organization for Migration, so that anyone that wanted to return to his country of origin would be assisted. Concerning the Roma he said that they were mainly traders and that any small time crime had to do mainly with theft and drugs.

There were two incidents involving Golden Dawn in 2013, the first during a gathering of Golden Dawn in Skala in July 2013, during which he was called a “gypsy mayor”, as he was later informed, because of his compassionate policy concerning immigrants and Roma. In the other incident, in a municipal council where Golden Dawn turned away an alderman of the KKE [:the Communist Party of Greece], a member of Golden Dawn had said outside the council that “the nice jobs are done at night”.

Responding to questions by the civil action counsels the witness stated that the Roma are part of Skala, that the community needs the work they provide, and that the mayor was asking for a legal framework that would allow the Roma and immigrants to work legally. It follows that the proposal by Koukoutsis to “tear them down” was neither fair, nor conducive to the position of the community on the matter. Responding to the question whether Golden Dawn had ever said during a municipal council “Do your job or if not we’ll do it for you”, he said that he does not remember such a thing, but the position of Golden Dawn on the subject of vulnerable groups was that the interests of the residents were being compromised. Concerning the stance of Golden Dawn against immigrants in general, he knows that it is hostile and that they used to chase them in the Athens street markets. Concerning the gathering that Golden Dawn organized in the Municipality of Evrotas, he said that they came with buses from the Nikaia chapter and that he saw a video of the attendants acting in the manner of a military unit. The witness stated that he had not been informed of the gathering and that he was out of town at the time.

When the witness asked why he was called a “gypsy mayor” by Aivaliotis, the local Golden Dawn representative, the next day his secretary received a phone call from Kasidiaris, who sent a message to the mayor to not bother members of Golden Dawn anymore and asked that the mayor call him back. The witness was asked whether there was a financial motive from proprietors of cleaning services who, when they didn’t need anymore the immigrants they employed and had to pay them, they chose to hand them over to the police so that they wouldn’t have to pay the wages owed, and the witness asked that he doesn’t know. He added, though, that many of the attendants in the Golden Dawn gathering were providers of cleaning services. Responding to a relevant question the witness stated that the municipal council intervention must have been planned in advance and that the Golden Dawners’ dress brought to mind images from Meligalas.

Responding to questions the witness said that before 2013 the residents of the area had complained about the immigrants only when the malaria issue came up, because the immigrants were not vaccinated in their countries of origin [Note of the editor: At this time there is still no malaria vaccine], but when the matter was resolved there were no more complaints. He also said that at the height of the financial crisis, when the immigrant stores were staying in business and the Greeks’ stores were closing, there was a measure of discontent. When asked whether the residents are afraid to go out at night, the witness stated that he has two children and that he has never felt such a thing. He admitted that there was an incident of a Pakistani immigrant who raped a woman, whose husband had a team of immigrants working for him. Responding to a relevant question he said that the positions of Golden Dawn are racist, and clarified that the political beliefs pertaining to vulnerable groups and the complaints towards them, should be impermissible by a political party. When asked whether the media are objective, the witness stated that in any case they grant the opportunity to get informed and form your own judgments. Concerning the employment of Roma in OAED he said that most of the citizens that were facing problems went to the KEP and submitted an application to be included in the registers of OAED. He added that the OAED programs are open to everyone, and that there are special programs for vulnerable groups, which do not result in unfavorable separation between citizen groups, because they pertain to community service only.

The witness stated that he is an employee of a super market in Anavyssos and is a resident of Anavyssos. In February 2013 he got off work at about 21:30 and stopped with his car in a nearby super market where his partner was working in order to pick her up and head home. The local chapter of Golden Dawn was 50 m from his house. As he was heading home, he had the car stereo on, and one of the songs that were playing was by I. Kabanellis “Arniemai, arniemai” [: “I refuse, I refuse”]. He is a smoker, and so the car windows were half-open. There were about 10 people outside the local chapter of Golden Dawn. He stopped his car, and started to unload the groceries when he saw members of Golden Dawn running towards him – he knew it was them by their mode of dress, which was black Golden Dawn t-shirts and camo pants. They were running and swearing at him, and before he knew what happened he was slapped many times. His partner started shouting. He fell down and was beaten. One of them was beating him and the others were leading him on shouting “Blood, Honor, Golden Dawn”, but they left when they saw a patrol car approaching. He was later told that the patrol car was in the area because Golden Dawn had a gathering at the offices of the local chapter. Later he went with the policemen to the Police Station. The police commander took him to the Golden Dawn local chapter and went up to see what had happened. The witness stayed on the street outside and after a while a man that introduced himself as Germenis told him that he accepts none of the accusations, but said “The music that you play in your car, it’s not good”. The rest then came down, and among them was a man that was standing next to the person that was hitting him, who was named Gikas, and who was transferred to the Anavyssos Police Station. Kasidiaris arrived later, since he wasn’t among the gathered, accompanied by members of Golden Dawn. They were all swearing at them and told the Police that they had a debate and that they were interrupted. The witness stated that Kasidiaris pressed charges against the police officers present, as the witness was informed on that same night. When asked if anything else happened in the next days, he said that he found written on the dust settled on his car the words “We will kill you” and “killer”, and that this was repeated about 10 ten times in the next couple of months. Concerning the incidents that had taken place in Lavrio, he mentioned the assault against two Pakistanis by Golden Dawn, as well as the vandalism of a store that employed immigrants. He also said that he knows about these incidents because at the time he was the secretary of the Lavrio Labor Center. Responding to a relevant question he said that the music must have been simply the pretext, since his union activism was known to Golden Dawn, and that the assailants had the usual mode of dress of Golden Dawners, with black t-shirts emblazoned with the words Golden Dawn and camo pants. Lastly, he replied that apart from his participation to the Lavrio Labor Center he had no other political activity.