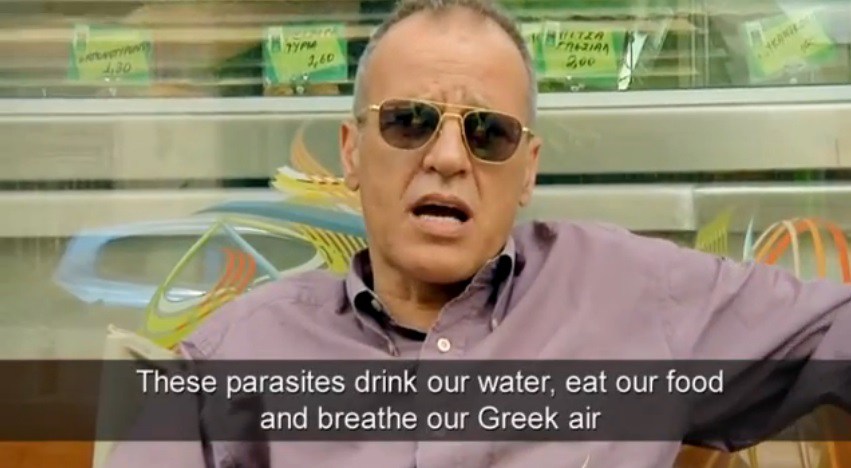 DAY 156: “THE KNIVES WILL COME OUT AFTER THE ELECTIONS”

The witness explained that he didn’t bring the documentary in its final version (37 minutes long) in his preliminary testimony, because it is protected by copyright. However, he did give a DVD full of uncut scenes about 80 minutes long, in which are included the 37 minutes of the documentary. The full footage he shot for the film is about 20 hours long. According to the witness, excerpts from the documentary were shown by ERT and Mega Channel. Michaloliakos responded with a statement in a regional channel about “the Jews and BBC”. The witness thinks that the charges brought against his person by Plomaritis are included in the sanctions that Michaloliakos had announced against him.

The witness believes that his presence and his activities involving the documentary were known at the highest levels of Golden Dawn. The witness named his film “The Cleaners”, because at the time the conversation in the area was how Golden Dawners would “clean up” Agios Panteleimonas. There was also a sticker -which the organization has never denounced- that said “clean up all the garbage”. The objective of the clean up were immigrants and political opponents (mainly from the left, but also from the democratic center and the right). The witness explained that the National Film and Television School of Great Britain, of which he was a student at the time, was interested in his project because Golden Dawn was thought of as one of the most extreme proponents of the far-right movement.

The witness testified that he had read in the newspaper of Golden Dawn a statement that what happened in Agios Panteleimonas [:he means the “clean-up” and Golden Dawn activity in the area] would also happen in Parliament. The witness didn’t know whether this proclamation would be realized, but noted that there was an aggressive political stance, a glorification of violence, and statements like “The knives will come out after the elections”. The witness believes that they [:Golden Dawn] did not respect the Parliament. After he shot the documentary, after 2013, the witness, who lives in the United Kingdom and follows the activity of Golden Dawn from afar, saw that they became more and more violent: “The things they were talking about in the film started happening”, as he said, with the objective “to dismantle the rule of law and replace it with a Nazi regime”.

Concerning the connection between Golden Dawn and the Greek Police, the witness thought that the Golden Dawners believed they did not need the police. The witness didn’t know anything specific about the Agios Panteleimonas Police Precinct apart from the fact that Vathis told him that he was “pals” with the captain there. Vathis had said to the witness that all the immigrant shops that had closed down in the Agios Panteleimonas area had been closed down by Golden Dawn. The witness had heard, in the cafeteria in Pipinou 111, that Vathis is a man “of the night” and that he has killed two people.

The witness testified that he did not think that the Golden Dawners “joked” when they were talking about bringing down democracy, opening crematoria etc. He also spoke about what has been called “the battle of Agios Panteleimonas” in 2011 when 150 Golden Dawn “brutes” put into effect a model of violence. According to the witness, “they praise Hitler from morning to night”. The witness didn’t see any difference in the things that Plomaritis and Vathis were saying and the activity of Golden Dawn as a whole. In the Golden Dawn headquarters in Deligianni Street the witness saw crowbars and shields modeled after ancient Greek shields.

Golden Dawn’s position on the immigrant issue was that every immigrant should leave Greece, or else be exterminated: “We should put everyone on a ship and then sink it so that they drown”, as one prominent Golden Dawn member had told the witness. As for the anarchist squats, the Golden Dawners had said that “they would burn all these people when they came to power”.

Β. Examination of the witness by the defense counsels

The witness had seen Vathis talk cordially with Kasidiaris, but had not seen his membership card. Plomaritis had shown his Golden Dawn Central Committee membership card on camera. The shooting for the documentary took place in January 2012 when the witness met with at least 50 people that were close to Golden Dawn, of whose prominent members were about 10-12. The witness spoke with Golden Dawners in Nafpaktos too, but concentrated his attention to Agios Panteleimonas due to time constraints.

The witness testified that he thinks that Golden Dawn is a Nazi organization, because of the symbols that they use, the things they say, and the acts committed by its members. The witness went on to claim, because of the swastika tattoos that he saw on the arms of its members, that they were neonazis. The witness also thinks that Golden Dawn had a concrete Hitlerist leaning, which gradually, after 2010, started to be labeled nationalism. The party platform up to 2012 contained various terms that directly alluded -since they were an exact translation from it- to the German Nazi Party platform.

The witness testified that Plomaritis was an older member of Golden Dawn and one of the more versed in the ways of the organization. Vathis, on the other hand, had told him that he had been a member of LAOS but had been disappointed and left.

During the official screening of the documentary in Greece, in the Institut Francais d’ Athenes (IFA), he had said that he wasn’t that interested in the [leading] members of Golden Dawn as in its simple voters-members, “because they are the true face of fascism, not Michaloliakos”. However, he didn’t find any, “they were all prominent members”.

The Thessaloniki Film Festival would not show his film because its administration was afraid, as the witness was unofficially notified.

The witness testified that he had no intention to frame the Golden Dawners that are shown in his movie. When asked by Michalolias (G.) whether the phrase that Vathis or Plomaritis say in the documentary “their [:the immigrants’] hair will be sold as trinkets in Monastiraki” is an official position of Golden Dawn, the witness answered that it fits well into the party platform.

Defense counsel Papadellis asked the witness if he was called to testify in the preliminary stage and the witness answered how the police could know that he was in the United Kingdom. When asked by the same counsel why he didn’t go to other Golden Dawn chapters, the witness said that he didn’t have enough funding [:for his student project].

The witness testified that he wasn’t directed to the particular members that are shown in the film by the headquarters of Golden Dawn, but that he found them himself by wandering around Agios Panteleimonas. It was clear that Vathis held some kind of power in the area. The witness clarified that he wasn’t searching for the “bad” Golden Dawn, he was just looking for members in that particular area. Plomaritis had said right away that he would participate in the film.

The presiding judge asked the defense counsel whether Golden Dawn claims that the DVD that is included in the case files with uncut footage was taken with a concealed camera. Defense counsel Michalolias (G.) clarified that the official position of Golden Dawn is that the material in the DVD “are the personal opinions of one of the dozens of candidates in 2012 and not the official positions of Golden Dawn. The line of questioning will show that during the first screenings in the IFA he [:the witness] said that he made a video with simple voters and not members, because he was not interested in the leadership. Let Mr. Plomaritis and Mr. Vathis come to court and clear up the matter”.

ΙV. Motion by the defense to examine the witness on the basis of screened audiovisual material

Defense counsel Papadellis motioned for the witness to be present at the next hearing so as to show the video of the speech of Kasidiaris in Aspropyrgos, which he referred to earlier, and to be asked about it. More specifically, to clear up whether the word “extermination” exists in the platform of Golden Dawn, and specifically the extermination of the Roma, to which Kasidiaris is thought to have mentioned, and the witness to be examined accordingly. The Court asked of the counsel to submit a written copy of the motion. The State Prosecutor motioned to dismiss the defense counsel’s motion because the witness is merely stating his opinion and that the defense could bring the speech of a defendant and then press charges of perjury against the witness. The witness clarified that he didn’t say that Kasidiaris said anything about “extermination”, but “human garbage”, which gave him the impression that he wanted their extermination. The defense counsel then retracted his earlier motion.

The presiding judge adjourned for May 26th, 2017, at the Women’s Wing of the Korydallos Prison, when witnesses I. Grypiotis and S. Zambeli are expected to testify.