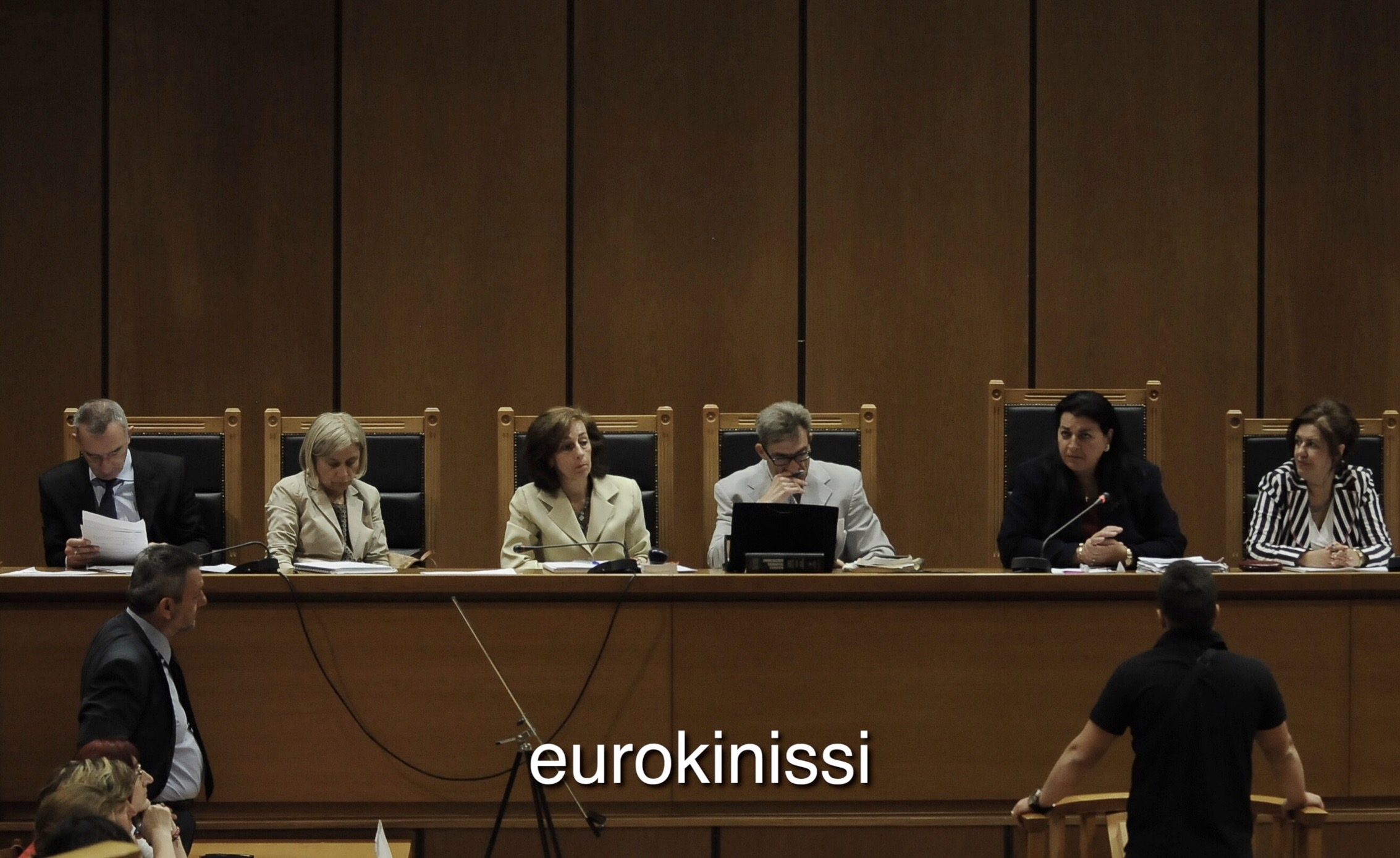 DAY 114: “THE ASSAILANTS DID NOT HAVE THEIR FACES COVERED”

The courtroom remains open to the public upon presentation of a state ID card, which is retained by court authorities for the duration of the session. There was reduced public attendance, but there were members of the press present at the hearing. The microphones weren’t working for the entire duration of the hearing.

Present at the hearing was one (1) defendant, I. Kastrinos.

The hearing commenced with the continuation and conclusion of the testimony by witness Tiliakos, and questions by the defense counsels.

Continuation of examination of witness Tiliakos

Responding to a question by the defense counsel for Kastrinos about whether the wintess can identify her client, he answered that he didn’t see him on the night in question.

Responding to questions by defense counsel Papadelis the witness stated that he gave a different answer during his preliminary testimony because he was asked different questions, that he never heard Poulikogiannis say that the majority of the assailants were minors, that he believes that Golden Dawn and assault squads are one and the same, that he has seen MPs next to assault squads, that he’s watched Michaloliakos say at Thermopylae that the bayonettes will grind on the pavements, that he was present in Rafina, he has proof that he has a house in Rafina, but he doesn’t say it, because he finds Golden Dawn pamphlets in his parking, and the same happens when he goes to Piraeus and parks his bike, and he looks to see if there are more in nearby vehicles, but there aren’t and that’s why he’s afraid, that he knows about the fishermen case, but the same happened with their own case, they said it was slander, and Pantazis said he wasn’t anywhere near the attack but later changed his testimony. He also mentioned that it is the actions of someone that make him a criminal and that he’s not afraid of political confrontations, but the Golden Dawn assault squads attacked them and he has never before had to physically confront anyone.

Responding to questions by defense counsel Tsagas he stated that he has never been a defendant in a trial concerning the labor union and that he can’t remember if he was a witness in one, that he doesn’t have experience in testimonies and neither has he ever been the target of a murderous ambush, and that he can’t remember the persons that he has gone on other poster actions with, since there aren’t any particular groups and compositions. He didn’t see who hit him and with what, his parka was torn at the back, when he got up he heard the phrase “Those from Perama this way”, that was when the assailants left, there were more people on the ground in front of him, someone threw a rock at him and everything happened inside of a few seconds, when Poulikogiannis went down he was standing in front of the witness, and he didn’t have time to see if they were throwing rocks.

Responding to questions by defense counsel Paipais he stated that he has not added any members to the union, that the Agios Nikolaos union is racist, because it purports to be a union of Greeks, that its president refers to the guys in black, that the mention of wages and the cultivation of altruistic and solidarity relations isn’t a crime, but the ways the union achieves these goals should be investigated, that the union is racist because on the sign it says “a union for Greeks”, but there are people of other nationalities working in the S/Y, the workers go up on the same scaffold, and if the scaffold collapses, both will fall. He stated that he doesn’t know how Kyritsopoulos is connected to the case, that he knows that there is a right to strike, but not a right to break a strike. He answered that he can’t recall Michos’ parliamentary work.

Responding to questions by defense counsel Pantazi he stated that Golden Dawn’s political beliefs are based in Nazi ideology, that they use a political mantle to deceit the masses, that their representatives in the workplaces say that the wages must go down, that no strikes should be organized and that Golden Dawn did vote to abolish the memorandum, but that’s what Nazi parties do throughout history, they deceit the people. Concerning Boukouras the witness mentioned that he has said in one of his interviews that he would give his life for the leader thus expressing the Führer Principle, he doesn’t know about Alexopoulos, he’s seen the Golden Dawn memorandum of association and it said that all decisions taken by the leader are binding, that the fact that the party has been sanctioned by the Supreme Court means nothing, the thing is what’s going to happen next and what’s going to happen next he felt it on his skin. Concerning the statement by Boukouras, “I thank the guys with the black shirts”, he said he saw him say it on TV, and he also said “form ranks, as required”. He doesn’t know whether the phrase “I thank the guys in black” has been attributed to a different defendant, neither does he know whether the newspapers Efimerida ton Syntakton and Ethnos would write that Boukouras said it, neither whether the aforementioned newspapers were the major players in an investigation of Golden Dawn.

Defense counsel Pantazi motioned to send the witness’s hearing testimony to the State Prosecutor in order to prosecute him for perjury, because the witness insists on a statement by Boukouras that has been proven to be fake. She also stated that she wants to demonstrate the witness’s fury.

Responding to a relevant question by defense counsel Pantazi the witness stated that he doesn’t know whether Boukouras has been a candidate for parties of a different part of the political spectrum.

Responding to questions by defense counsel Velentza he stated that they had started propagandizing the Festival many months earlier, that he can’t remember if they went out to put up posters many times or a few times, that he doesn’t know if they went to many streets or a few streets, he handed out pamphlets at his workplace as well as in the Piraeus train station, that the two persons he named the leaders of the assailants were closer to him, that Poulikogiannis was at the back before he stepped to the front, that he never heard the assailants say that they were putting up posters too, he stepped back out of fear and touched the car, that he was wearing a parka, that he placed his hands on his head to protect himself, that the assailants were holding various things with which they used to hit his comrades in the arms, it was his arms that protected him, if he hadn’t put them up he would have been hurt badly, that about 9 persons from his group went to the hospital, he saw them hit Poulikogiannis and then he was hit next. Responding to relevant questions he stated that he saw them throw a chair, that he doesn’t know whether they found blood in the spot that Poulikogiannis fell, but in the photo Poulikogiannis is bleeding, and the witness saw his comrades cleaning the blood off Poulikogiannis with towels and tissues. He also stated that he can’t remember how the union fared in the 2010 elections and that now he’s afraid about the pamphlets that are directed only to him.

Responding to questions by defense counsel Oplantzakis he stated that the pamphlets write on them that Greece belongs to Greeks, that when you vote against the memorandums in Parliament and pose questions, and then in the workplace you call for the lowering of wages to bring in more ships, then you invalidate the worker’s struggles, that the strikes are organized to protect the workers’ rights and that there is an EU directive to close down the S/Y, that the statement of Lagos “we will be the end of you”, he understood he meant a murderous ambush, that the whole thing aimed to eliminate him, that he was hit in the leg, but he was bent over, their goal was to immobilize him and then continue, that when he heard from the balconies the phrase “we have called the police”, he heard the signal and they left.

Responding to questions by defense counsel Zografou he stated that on the night in question he heard that the Perama decision will be put in effect.

Responding to questions by the defense counsel for Michaloliakos he stated that they propagandized other political events such as meetings and speeches, that in the hospital they performed an ultrasound on the witness to ascertain that his blood was still flowing in the central artery, that the forensic surgeon told him the pain will pass, that Poulikogiannis looked like he was dead, that Golden Dawn acts differently on the streets and differently in Parliament, that Michaloliakos has been talking about assault squads since 1998, that the memorandum of association may refer to organizational bodies but there are statements by leading members such as Rigas that say that the only one that matters is the leader, he knows of no other party where the decisions of the leader stand above everyone else’s, that the attack on Poulikogiannis was not a personal one, but a matter of position, that he went to the Rafina festival with his kid, that the guys with black shirts act only after they receive an order, that on the night in question they went out to do what had been planned, that the Golden Dawn blood donations were only for Greeks and the State Prosecutor intervened. He also mentioned that Golden Dawn maintains that they don’t believe in the parliamentary system.

Responding to questions by defense counsel Roussopoulos the witness stated that he doesn’t know whether the slogan “Greece belongs to Greeks” was said by Papandreou, that a tattoo does not label a person, but it can label him when you factor in his actions as well, that from time to time both PASOK and ND have been represented in their union. He also stated that some of his comrades were taken to the hospital in an ambulance.

Responding to questions by defense counsel Alexiadis he stated that they left because they thought that they had achieved their goal when they saw Poulikogiannis bleeding, and that Kyritsopoulos, who is a president of the slave labor union, said in his speech that they should close the union and take them to the cuckoo’s nest, that the text messages by Lagos said that we butchered them, they’re chasing them and they got their first answer and that Lagos knew what was happening in real time.

Responding to questions by defense counsel Triantafylloudis the witness stated that the assailants had not kept their faces covered, that he heard Poulikogiannis say “What’s up guys?” and that he didn’t see them hit anyone else.

At this point, and while the members of the Court had already left the courtroom and the presiding judge had adjourned for Monday, January 16th, 2017, at 09:00, in the Court of Appeals, Magda Fyssa, who was present, addressed defense counsel Pantazi protesting her behavior and the counsel’s supposed ignorance concerning the assault squads.