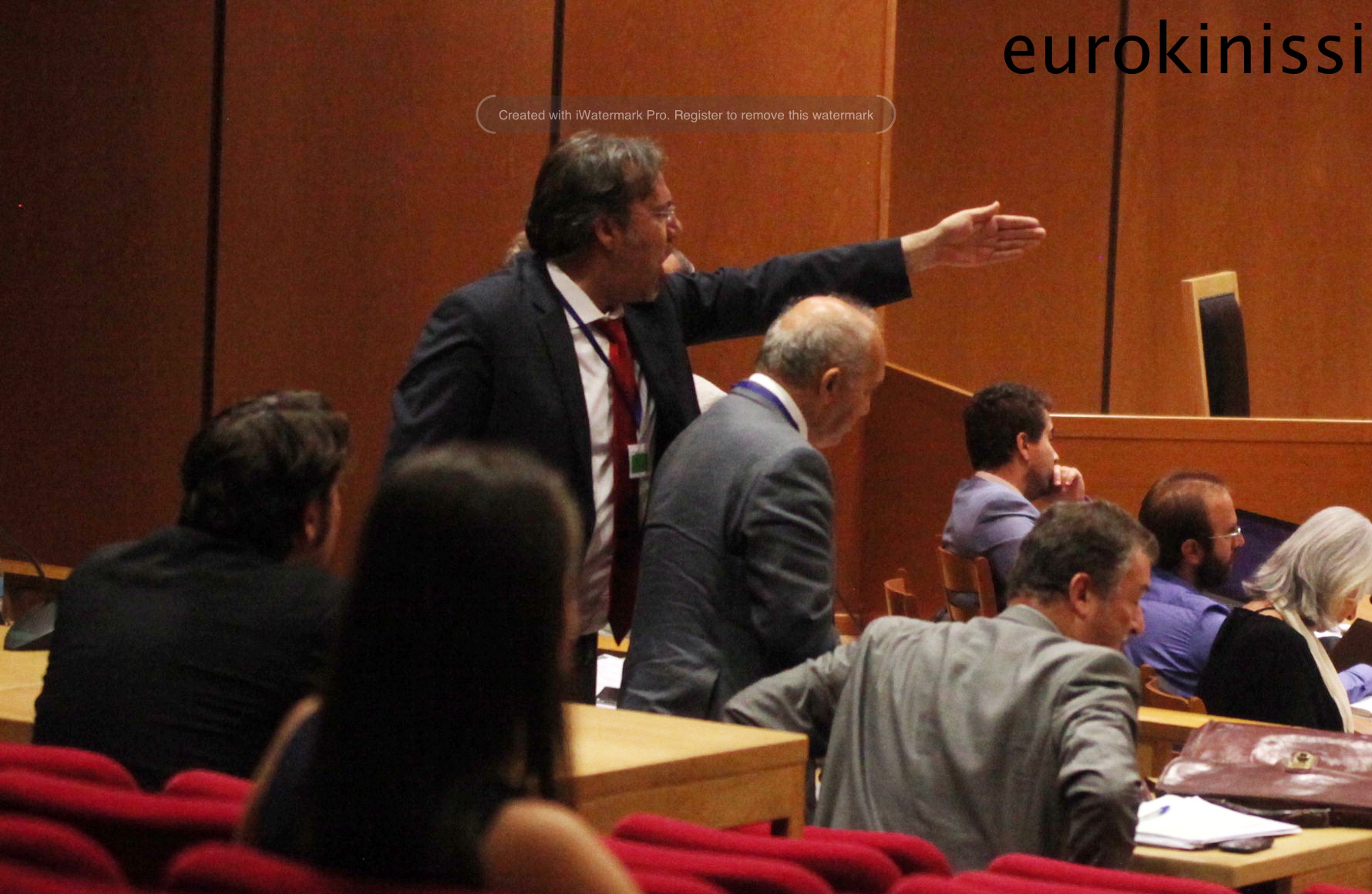 Present at the start of the proceedings was defendant Komianos. Thirty-five (35) defendants were recorded as absent, while the rest were represented by their counsels.

The presiding judge has ordered the defendants Pantazis, Agriogiannis, Evgenikos, and Papadopoulos (for the case of the attack against the Egyptian fishermen) to be personally present at the court, something that is expected in one of the next hearings. The court decided that the defendants’ presence at the hearing is necessary so that they can be identified by the witnesses.

Defense counsel Tsagas (for Michalaros and Germenis) was the first to take the floor. Responding to questions by the defense counsel, the witness stated that he knows few words in Greek, and that one of these was the word “let’s go” [:“pame”] that he heard that night. He also said that he took a blanket on the roof to protect himself from mosquito bites.

Responding to questions by defense counsel Zografos (for Gregos and Michos), the witness calculated the ages of his children. The defense counsel disputed the witness’s reliability, since he wasn’t able to answer the question right away. The witness went on to say that he was beaten until he lost consciousness. Asked whether he has heard of other attacks by Golden Dawn, he stated that he’s heard that Pakistanis have been found dead in garbage bins and that he knows someone who lost his kidneys. Then he testified about an Egyptian friend of his, whom he met in a TV show, who had been attacked by Golden Dawn in Salamina.

Responding to questions by defense counsel Oplantzakis (for Kazantzoglou and Roupakias) the witness testified that Ahmed had received death threats, but he didn’t believe they were serious and that back then he thought that in Europe he was in no danger whatsoever even if he slept in the middle of a square. The witness then stated that he knows nothing of clashes between immigrants, and that on the night in question he was sleeping on the roof. When they started hitting him, he covered himself with his blanket and they continued beating him until they thought he was dead. He said that they wouldn’t leave before they killed him, and added that the goal of the attack that took place afterwards [:against the house] was to murder them too.

Responding to questions by defense counsel Velentza, the witness answered that he has given two testimonies, one in court and another one in Piraeus. In a subsequent question by the defense counsel whether the witness owes money and to whom, he answered that he owed a small sum to Ahmad, but after the incident the debt was paid off. He also said that his Egyptian friends in Greece were helping him with food and lodgings, but they weren’t lending him money and he was in need of financial assistance. The defense counsel then asked him why he fathered two children since he was in dire financial straits. The presiding judge intervened to strike out the aforementioned question which was objected by the witness’s civil action counsel (Th. Kabagiannis). After a short recess to restore order in the courtroom, the defense counsel continued the cross-examination. The witness stated that he hadn’t applied for a residence permit in Greece before applying as the victim of the attack. In another question by the defense counsel he testified that on the night of the incident he had with him his cellphone, his cigarettes, a key to the house, the blanket he used to protect himself, and the clothes he was wearing.

Responding to questions by defense counsel Papadellis (for Kasidiaris) the witness stated that in his country he worked as a fisherman, and in Greece he found work in a small fishing vessel owned by two Greeks, called “Sarabas”. They had agreed on a monthly wage of 700 euros, but at the end of the month they gave him only 100 and so he quit without getting into a fight or reporting the employers to the labor inspectorate or other agency. He then said that he came into the country by a sea route, without papers, and that after the incident he went back to Egypt, after an Egyptian friend of his brought him his passport. The witness testified that he now has a residence permit in order to be present at the proceedings.

Responding to questions by defense counsel Tzebetzis (for Korkovilis) the witness stated that after the attack Golden Dawn offered to make amends, but no one ever came into contact again, neither did they specify how they were going to make amends. After a relevant question the witness stated that he wouldn’t have accepted money to withdraw his claims. He also said that when he glanced from under the blanket, he saw that the roof was full of people, about 15 of them. He went on to say that the assailants went down to the house and tried to enter by breaking doors and windows. The Egyptians in the house were fighting back and shouting until the neighbors heard them and called the police.

Responding to questions by defense counsel Michalolias (for Kasidiaris), the witness briefly recounted how he was called to participate in the Egyptian TV show “Truth”, along with another Egyptian who said that Golden Dawn had maltreated him in Salamina. He also said that three people were convicted and jailed. The defense counsel asked the witness whether he was sure that he was accusing Golden Dawn, and the witness said that he was sure and that attack on his person was carried out by Golden Dawn. He continued by saying that in the same show there were others (immigrants) that had been beaten in Omonoia.

Responding to further questions by the defense counsel the witness stated that during his hospitalization he didn’t have health insurance. He went to the hospital at a later time and submitted the health insurance documents of a friend who was charged 2,500 euros. The witness stated that he has visited an Egyptian doctor, since he’s afraid to go to a Greek doctor whom he’s not acquainted with, who told him that the implants will have to be removed in two years, something that may worsen his condition. Finally the witness stated that 6-7 months after the attack he started working but he finds difficulties at his employment and that even now, in court, when his life hangs in the balance, he can’t stay focused for long.

The floor was taken by defense counsel Stavrianakis. Responding to questions by the defense counsel, the witness stated that he came to Greece from Egypt after paying Egyptian traffickers. The witness also testified that whoever was in his place on the roof that night would have been beaten to death. The defense counsel then commented on the difference between the witness’s preliminary testimony, when he said “The first thing I saw when I started regaining consciousness was the inside of the ambulance”, while in the hearing testimony he said that in the ambulance he had  been unconscious. The defense counsel added that the witness was beaten up by the people he owed money to, and that’s the reason for the inaccuracies.

The first to take the floor was the civil action counsel for the witness, A. Papadakis. The counsel said that should the court decide to dispute the credibility of the witness, because he didn’t testify under oath, then the decision’s validity will come into question, since the opposing parties are examined without oath. The counsel went on to request a medical expert opinion.

Civil action counsel Zotos stated that the witness testimony illuminated the exact mode of the attack against him, and everything he said can be confirmed by the photographs of his smashed skull. In the counsel’s words, the assailants had deadly intent against the witness, and also against the Egyptians in the house. Finally the civil action counsel stated that there’s nothing worse than trying to morally attack the witness, asking him why he had children when he didn’t have the means to care for them.

Civil action counsel Skarmeas commented on the part of the testimony where the witness said that on the day in question someone had telephoned Embarak’s friend and had told him “we’ll kill you all” and not just “we’ll kill you”. Also, the defense counsel stated that the ambush nature of the attack, the time of night, the brief duration of the attack, and the police’s negligible arrests, have much in common with the Fyssas case. Then he said that the phrase “let’s go” that the witness heard from the assailants shows the coordinated nature of the attack.

Civil action counsel Tobatzoglou commented that the many persons that participated in the attack, and the way it was carried out, so that the witness had no avenue of escape or chance of defense, shows the way the perpetrators acted, as well as their racist ravings.

At this point the defense forcefully objected to the civil action counsel’s comments about racist ravings.

The presiding judge adjourned for Tuesday, September 13th, 2016, at the Court of Appeals.