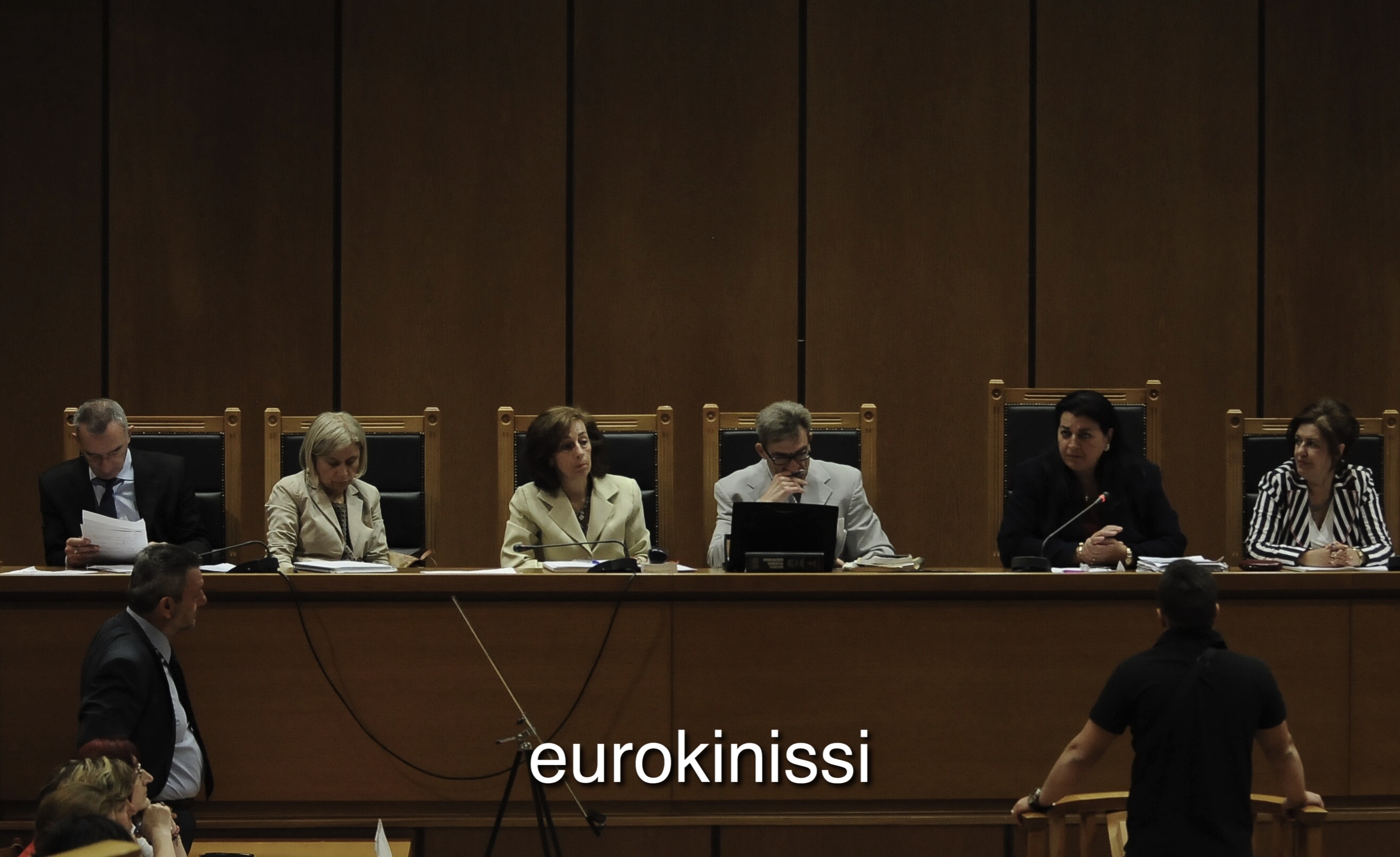 The courtroom remains open to the public upon presentation of a state ID card, which is retained by court authorities for the duration of the session. Audience and journalist attendance was limited.

Present at the hearing was defendant Komianos, and most of the rest of the defendants were represented by their counsels.

First to take the floor was the defense counsel for Roupakias. Responding to questions by Roubekas the witness said that Fyssas was infuriated by the fact he had been wounded. He was lifting his shirt and saying “me?”, “me, you guys?” The witness also testified that when he arrived at the murder scene he saw just one group of 4-5 persons. When he got near, Roupakias was already in the car. He testified that he didn’t see anyone joining the group or leaving it.

Responding to questions by defense counsel Bonis, the witness briefly recounted how he followed the persons along Kefallinias St, and when they started running along Tsaldari Ave. he requested backup. When he arrived at the murder scene he saw 4-5 people but he can’t recall any of their faces.

Responding to questions by defense counsel Zografos, the witness stated that there was enough light to see the color of the clothes of the persons that were gathered there, and that he didn’t make use of his flashlight. He also stated that when the police conducts checks, the officers stand at a secure spot and call the suspect to check him or her, while on the night in question the gathered group ran away.

Responding to questions by defense counsel Michalolias the witness answered that when a signal concludes with “line closed” then it is not deemed as very serious.

Defense counsel Papadellis asked “if the knifing hadn’t taken place how would 8 policemen proceed when they’d see 4 people fighting?” The witness answered that usually they immobilize the persons involved, then run a check on their ID’s, and if there’s bodily harm involved they ask them if they want to take legal action against the opposite party.

The floor was given to the civil action counsels. Civil action counsel Papadopoulou commented on the testimonies of Mantas and Ksypolitos. She said that the witnesses identified 3 persons that had been present in the Café Koralli and stated the reasons why it is certain this was a premeditated crime. The counsel said that Mantas and Ksypolitos illustrated the escalation of the Golden Dawners’ actions under the police’s tolerant eye. Concerning witness Vintsis the defense counsel stated that he operated as a cab driver driving a patrol car. Concerning the testimony of Roupakia the civil action counsel commented that the witness was very well-prepared and that she had read up on her testimonies. In conclusion she commented that Tsolakidis, the commander of the DIAS squad, is lying when he’s saying that he didn’t know whether they were Golden Dawners or not, when it was him that sent a signal that said that Golden Dawn members were present.

Civil action counsel Tobatzoglou commented that from Roupakia’s testimony it became clear that she knows everything about the organization and what really happened, and that she knowingly covers it up. That’s why when she did the search on the internet she typed “attack Amfiali” and that’s why she insisted, falsely, that she has never witnessed a Golden Dawn attack.

Civil action counsel Tzellis said that Officer Vintsis is at the very least a suspect, if he purports that while a knifing is taking place in front of police officers, his job was to guard a car belonging to the state. The civil action counsel went on to state that officer Tsolakidis is obviously lying. Concerning the testimony of Roupakia the civil action counsel said that there are contradictions between what she said in her preliminary testimonies and what she testified at the hearing, and that she withheld the fact that Kazantzoglou was in her car. Concerning the witnesses Mantas and Ksypolitos he stated that they honestly and forthrightly declared their political beliefs, and what they lived through on the night in question, without concealing anything.

Civil action counsel Kabagiannis commented that Roupakia testified about the phone call that Roupakias [:her brother] received, and about the Golden Dawn gathering that took place afterwards at the organization’s offices. The witness stated that they told Roupakias to follow suit and he did, something that shows succinctly the existence of a [:criminal] organization.

Concerning the testimony of witness Chatzistamatis the civil action counsel said that he was the most credible of the witnesses, who just happened to be on the scene of the crime. The special guard talked about the state of both sides, and said that the Fyssas group was calm while the Golden Dawn group was agitated. He stated that the group was indeed comprised of Golden Dawners who were marching, something that can only be achieved with training. He mentioned a command and described the exact way that the attack unfolded. Concerning the witnesses Mantas and Ksypolitos he commented that they illustrated the reasons why the fight didn’t take place in Koralli or outside it. The Golden Dawn members had to unite in order to attack, something which, according to the counsel, was confirmed by the students’ testimonies. Concerning the testimony of officer Tsolakidis he said that he didn’t see Roupakias’ car come, neither did he see Roupakias make his escape. The officer arrived at the murder scene only after the knifing, and constructed a narrative as an excuse for his conduct. The civil action counsel went on to say that it’s impossible that he [:Tsolakidis] was chasing the Golden Dawners for 4 minutes, because if he had he would have gone further in the space of those 4 minutes.

Civil action counsel Sapountzakis commented that witness Ksypolitos testified that Roupakias arrived escorted by multiple motorcycles and cars. Roupakia stated that he was coming from the offices of Golden Dawn, and that her brother wasn’t acquainted with Fyssas. The civil action added that Roupakias committed murder not as a unit, but as a member of a group, and not for his personal reasons. He went on to say that when witness Chatzistamatis was asked why would Roupakias do such a thing, he answered that it was clear he did it to ascend in the hierarchy of Golden Dawn. He [Chatzistamatis] talked about a march, about the deadly wound, as well as which group was in defense and which was in offense. Concerning the testimony of Kontonikolas the civil action counsel stated that the witness made it clear for the court that it wasn’t a fight, but an unprovoked attack of five persons against one.

Civil action counsel Papadakis commented that Tsolakidis and a few other police officers should be sitting in the defendants’ section. He made mention of a connection between the police and Roupakias, which was clearly shown from the way his arrest was conducted and from his behavior in the police station. Concerning the testimony of Roupakia, the civil action counsel said that she came to defend her brother saying various falsities, as well as the organization she is clearly a member of. He went on to say that the murder of Fyssas had been planned well in advance, and not just from the previous day. They acted with a speed and effectiveness that even the most hard-line criminal organization would envy.

Civil action counsel Malagaris commented on the testimony of Roupakia that the group had gathered in the offices of the organization. They were all headed to a specific spot, and everyone knew which. He also commented that it was clear that the rest of the group knew what would happen from the fact that they tried to neutralize the two friends that were at the scene, and that’s why they hit them and left them. They wanted Fyssas and it is clear that they had deadly intent. The civil action counsel said that 20 people were standing opposite them because they knew that Roupakias would come to kill. “It’s not random that 4 people stop hitting at once and open ranks to let another man pass through.” When their goal was attained, they all left at once.

Civil action counsel Theodoropoulos commented on the contradictions in the testimony of Roupakia. The counsel maintained that her testimony showed that someone phoned the political action head, and then he called the regional leader. Roupakias then followed the one they told him to follow. He didn’t go there by chance and neither did he start a fight for personal reasons. It was clearly a premeditated crime. Concerning the testimony of Chatzistamatis the counsel commented on the marching feet the witness heard. Concerning the testimony of Mantas the counsel said that the pedestrians united with the motorcade before they proceeded to action. This shows a premeditated act. Concerning the testimony of Kontonikolas he commented that he is the witness that saw the 20 people that the police officers reported. The civil action counsel concluded the comments by saying that it became clear from the witness testimonies that Golden Dawn has duration, connections, structure, and training.

At this point the court adjourned for Thursday, September 8th, 2016, in Korydallos. The witness testimony of Eirini Fyssa is slated to conclude, which has been long pending, as well as the continuation of comments by the defense counsels (under article 358 CCP).