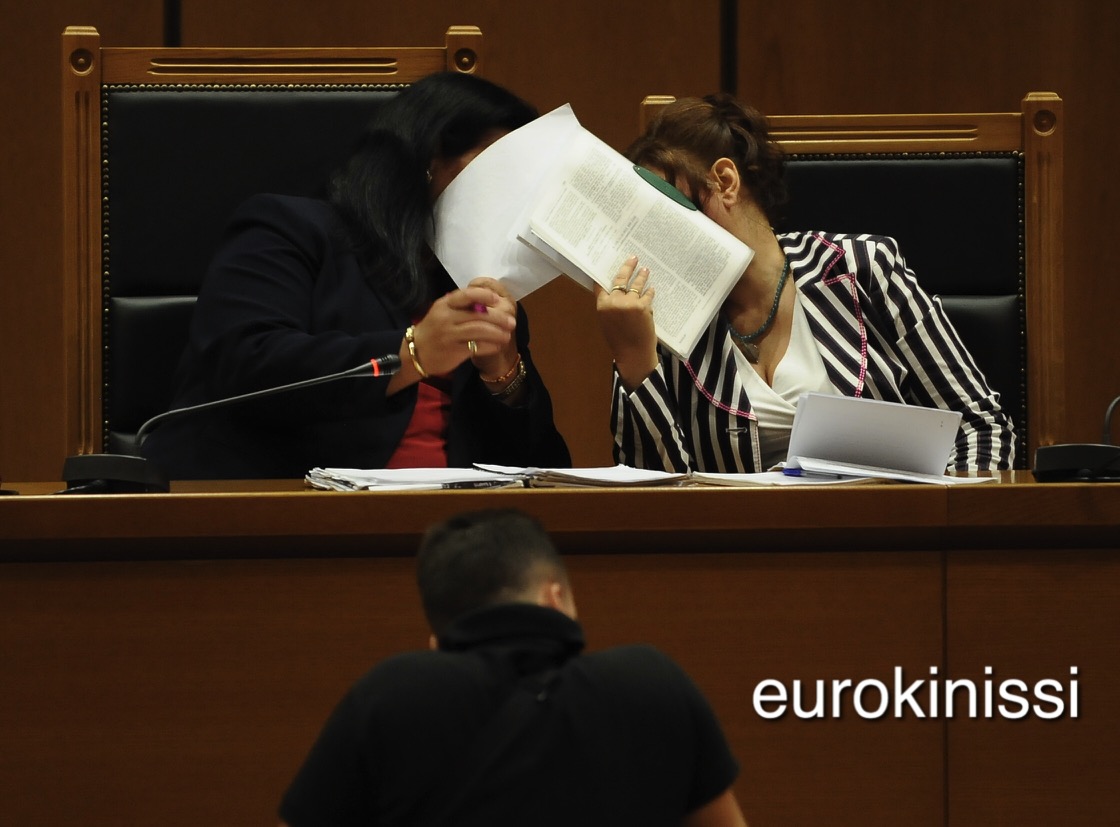 Present at the hearing were two defendants (Komianos and Patelis), and most of the rest of the defendants were represented by their counsels.

Examination by the Civil Action Counsels

First to take the floor on the civil action side was Ch. Papadopoulou (for the Fyssas family). The civil action counsel submitted a request to read in court the signals sent to the Greek Police HQ on the night in question by the witness and his colleagues. The motion was denied, since, as presiding judge M. Lepeniotou said, the documents that have been marked as to-be-read, will be read later in the course of the trial. A map of the area was then submitted to court. The witness, aided by the map, described the exact movements of the police officers and of the gathered crowd. Responding to questions by the civil action counsel he testified that he sent a signal to HQ saying that there were people running and then called for backup. Chatzistamatis (a special guard) did not point out who were the anarchists and who were Golden Dawners. He also testified that he doesn’t know the location of Golden Dawn offices in Piraeus.

Civil action counsel Papadakis (for the Egyptian fishermen) asked the witness why they didn’t arrest anyone and why they didn’t make use of the resources policemen have (motorcycle headlights, flashlights, warning shots, etc.). The witness answered that there were few policemen present. The scene of the crime was too dark to see but they didn’t throw light with their flashlights or the headlights (the DIAS motorbikes were parked). They were in a residential area and they couldn’t fire a warning shot. For security reasons they chose to pursue the suspects on foot and one of them stayed behind with the motorbikes. They couldn’t arrest or identify anyone.

Responding to relevant questions by civil action counsel Kabagiannis (for the Egyptian fishermen) the witness testified about the times that the police can proceed with arrests, body checks, and bringing in persons for questioning, and identified DIAS motorbikes in photographs he was shown from the documents to be read. The identification of the witness will be discussed later in the course of the trial, in the discussion relating to the read documents.

Responding to relevant questions by civil action counsel Zafeiriou (for the PAME members) the witness stated the following: The gathered crowd did not wear Golden Dawn insignia and he didn’t understand right away that they were members of Golden Dawn. Responding to questions by the civil action counsel about the reasons why the police officers didn’t run a check on the motorbikes’ registration numbers, the witness responded that they had the murder weapon.

Responding to questions by civil action counsel Stratis (for the PAME members) the witness stated that as he was running in pursuit the distance between the suspects and himself increased because he stopped to send a signal.

Responding to relevant questions by civil action counsel Theodoropoulos (for the PAME members) the witness stated the following: He knew nothing of the activities of Golden Dawn during the years 2008-2013, except for a few things he saw on TV. At the police academy he wasn’t trained in orientation by compass, but he has done target practice etc.  Responding to a relevant question he stated that civilians don’t have access to the testimonies of police officers.

Responding to relevant questions by defense counsel Kontovazenitis (for Anadiotis) the witness stated the following: When the knifing took place he was located in the intersection of Tsaldari and Kefallinias. The persons he was pursuing were running towards Lambraki. When he got on the scene the knifing had already took place. He also stated that he didn’t see Fyssas arguing and that the incident was unified (the gathered crowd started running along with the 4-5 that were standing at the spot where Fyssas was).

Defense counsel Oplantzakis asked whether a hypothetical mastermind had any reason to give an order to those that started running, in order to alert the police to the scene of the murder. The witness responded that he had no opinion on the matter. He went on to say that at the scene he saw 4-5 persons that “made themselves scarce” and only Fyssas, who had been knifed, was left behind, and that he saw no one (not even Roupakias) join the group of 4-5 people. Then, the defense counsel asked the witness whether he has heard anything about the threat of criminal offenses such as robberies and muggings from immigrants and if he has heard that Golden Dawn protects vulnerable groups (such as old people etc.) The witness acceded that he has. He had nothing further to offer as answer to the defense counsel’s question whether the person protecting vulnerable groups should receive special training to repel criminal actions against them.

Responding to relevant questions by defense counsel Velentza the witness stated the following:  Roupakias was in his car ready to leave, the car’s wheels were turned and his hands were on the wheel. He couldn’t recall whether the engine had been turned on.

Responding to relevant questions by defense counsel Tsagas, the witness stated that he can’t recall whether he had already seen the knife at the time he sent the signal (to arrest the suspect). He also testified that the communications center of the Greek Police is common for everyone. Apart from him, other police officers of the Greek Police send signals to the same center. Responding to a question by the defense counsel what would the Greek Police have done if Roupakias had made his escape, the witness answered that they would have questioned the victim and the witnesses about the perpetrator’s characteristics, the getaway vehicle, and they would have sent a signal to the comm center to launch an investigation.

Last to take the floor was the defense counsel for Roupakias. Responding to relevant questions by Roubekas the witness stated that he couldn’t tell whether the perpetrator’s behavior was professional or amateurish. Responding to another question he stated that if the 4-5 persons he saw in a group around Fyssas, contained any friends of Fyssas they wouldn’t have left after the knifing.

The presiding judge adjourned for Tuesday, September 6th, 2016, where the trial will continue in the Women’s Wing of Korydallos Prison, where Anastasios Tsolakidis (a DIAS police officer) is slated to continue with his testimony.