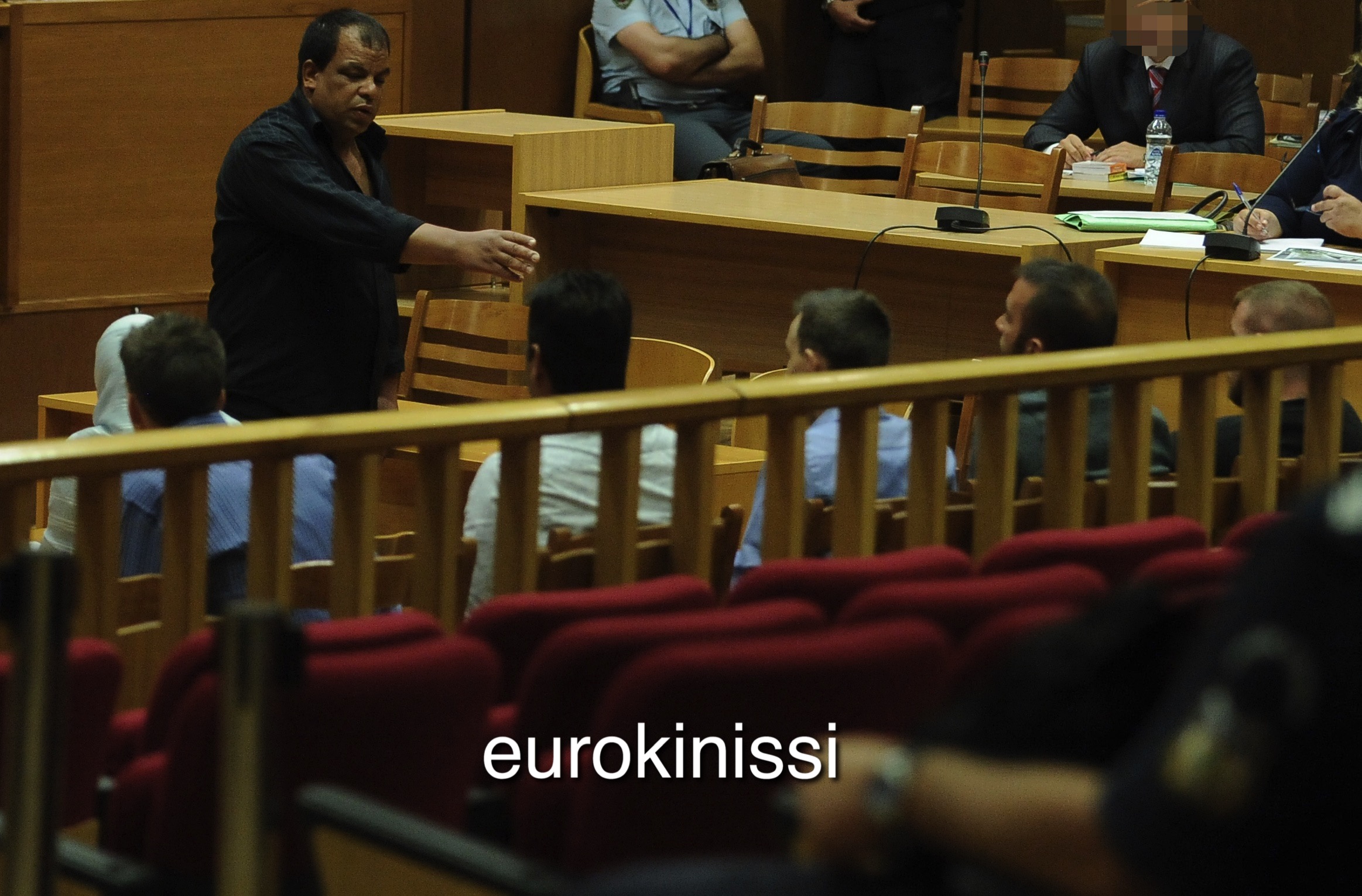 The courtroom remains open to the public upon presentation of a state ID card, which is retained by court authorities for the duration of the session. There was significant audience attendance, and the presiding judge requested at the start of the proceedings that no spectators wear hats, hoodies, or sunglasses. Tensions ran high in the courtroom today.

Present at the hearing were three (3) defendants. Komianos (for the Fyssas case), and K. Papadopoulos and Th. Marias (for the Egyptian fishermen case). Defense counsel Karagiannis (for Agriogiannis) stated that his client was working and could not attend court. M. Evgenikos and A. Pantazis arrived later in the proceedings. Twenty-seven (27) defendants were represented by their counsels, and the rest were recorded as absent.

The civil action counsels (for the Egyptian fishermen) submitted a motion to forcefully bring the defendants in court, since there was already a relevant decision which was being ignored. The Prosecutor reserved her decision, adding that “the defendant’s absence can be attributed to professional obligations”. Civil action counsel T. Zotos pointed out that three of the defendants routinely and vaguely invoke professional obligations, and Th. Kabagiannis added in the same vein that “the Prosecutor speaks for Pantazis and Evgenikos, when there are no relevant documents that prove the absence is justifiable. The request by Agriogiannis is vague, and for the others it hasn’t even been submitted. How can the witness identify the defendants if they don’t come to court? The no-shows don’t help the trial’s progress.” Defense counsel Karagiannis certified that he would submit a certificate confirming Agriogiannis’ professional obligations. A little later the court decided to forcefully bring to court the three defendants that routinely failed to be present (Agriogiannis, Pantazis, Evgenikos).
The civil action counsel motioned to eject from the courtroom those witnesses that will be examined later and have been proposed by the defendants. It was ascertained that in the audience sat two Golden Dawn parliamentary candidates, Papadimitriou and Alexandrakis, who were also witnesses in the trial.

The witness stated, among other things, that he is a resident of Greece since 1997. He has worked as a fisherman, a factory worker, and since 2006 as an employee at his brother’s shop. They were living in Perama, in Sofouli St., from 2003 until the day of the attack, June 12th, 2012. Concerning the incident he stated that around three in the morning, and as he was sleeping in the room with his nephews, he heard wooden clubs knocking on the windows and door, the whole house shook as if from an earthquake. He understood right away that Golden Dawn had come to murder them in their own home.
He had heard of a Party that targets immigrants. He had no differences with anyone, in the neighborhood or at work. When he heard the noises he got up, opened the window, and started shouting.

It was then that he saw about ten people wearing black shirts with golden letters, but he can’t read Greek. The witness added that the group was comprised of young people, 20- to 25-years-old, and one of them was a little older, another was a bit fat and had blond hair, and a third one had a beard. He quickly closed the window because he became afraid, but when the neighbors started coming he opened it and started throwing things at the attackers. It was then that he saw a young woman. The witness also stated that he didn’t leave the room because he was afraid and there was smoke in the hallway. Then they saw the fire extinguisher in the hallway, they opened it and threw it in the house from the door’s broken glass pane. The witness said that some of them were carrying steel clubs, but most carried wooden ones. The attack on the house lasted for about ten minutes. Responding to a question by the presiding judge, when was it that he saw the faces of these ten persons, the witness said “when I opened the window they were right there in front of me”, adding that he had good visibility because “there is a strong streetlamp right outside the house. It’s on the opposite side of the street, directly across my window.” In addition, the lamp above their front door was switched on.

The witness went on to say that when the assailants left the house they went to the vehicles in an orderly manner and started hitting only the three that belonged to the Egyptians, the motorbike and two commercial vehicles, despite the fact there were other vehicles parked right next to them. The witness stated that they caused damage only to these vehicles because it was evident they were the Egyptians’, one of them even had the name of his brother painted on the side, and they were well-known in the area. The witness said that many neighbors came out of their homes after the attack against the cars, at which point the police was called and arrived five minutes later. When the witness went out to the hall he heard Saad shout “Abouzide” and saw those ten persons leaving towards the traffic light, where there were others waiting for them on motorbikes.

The witness’s brothers went up to the roof to see to Abouzide and then carried him downstairs on their shoulders. He had lost his senses and had blood on his head and on his clothes, his face was swollen and he couldn’t talk. The witness sat in the hallway of the house with Abouzide while they waited for the ambulance to come, and Saad came with them to the hospital. The police then drove him and his brother Ahmed to the Perama police station, and told them that they have arrested a Golden Dawn group and they must go to the Keratsini police station to identify them. Responding to questions from the presiding judge about the neighbors, the witness mentioned that a neighbor called Kostas told him at the time that it was the Golden Dawn, and that it was written on their clothes. The witness identified five persons he was shown at the police station, but he wasn’t sure about the woman. Then, he stated that Abouzide stayed in the hospital for about two weeks, and that he was operated in the jaw. Afterwards he stayed with the brothers Abou Hamed for about a year, because he couldn’t work.

Responding to questions by the prosecutor the witness stated that they probably threw stones at the cars because he saw one in his tricycle. He didn’t see if anyone was giving orders, but one of them shouted more than the rest. He also said that first came the attack on Abouzide and then the attack to the house. Afterwards Ahmed told him that he had received an anonymous threatening phone call before the attack. He added that the assailants threw the extinguisher dust on purpose, so that the people inside wouldn’t react, then get inside and kill them.

The deputy prosecutor requested of the witness to take a good look at the five defendants in the courtroom and state whether he recognized any of them. The defense counsels started protesting and wanted to object. Meanwhile, the witness stated that he recognized Pantazis, Evgenikos, Th. Marias, and K. Papadopoulos, and that the one with the “beard” was Pantazis. Responding to relevant questions the witness stated that he had heard that Golden Dawn targets immigrants to drive them from the country, but he didn’t expect them to attack their house.

At the moment of identification of the defendants by the witness, the defense counsels objected en masse and in succession, under article 225 of the CCP, which concerns the identification process. Defense counsel Gavelas (for Pantazis) objected and motioned to disqualify both the preliminary and the hearing testimonies, saying that “during the preliminary investigation the witness never described anyone, yet proceeded to identify. Today I expected differently of this court, for the Prosecutor to ask for a description and then to proceed with the identification. I hereby state that the witness’s answers have been prepared in advance.” He also requested that the defendants be mixed up with other persons with similar characteristics and then proceed with the identification. The same objection was submitted by defense counsels Papadelis, Poulia, Glykas, Roussopoulos, Michalolias G., and Velentza.

The prosecutor proposed to reject the objection, given that the court had already reached a decision on the matter, while the rest aren’t called because their faces are known from the media.

Defense counsel Velentza, apart from the objection, motioned to detain the witness for perjury, related to the testimony about the “young woman” he saw that night. The prosecutor said that it’s not possible at the moment to detain the witness, and the process should be pursued via the prosecutor’s office. At this point civil action counsel K. Papadakis said: “The witness hasn’t even finished his testimony and Ms. Velentza asks to detain him so that he won’t be able to finish. The defense attempts to turn a matter of substance to a matter of due process and completely derail the proceedings.”
The court decided to reject the objection, judging that the process has been carried out in concordance with article 225 of the CCP. The court similarly decided on the perjury motion, because the trial will go on for a long time, and also because the witness’s presence is necessary to the proceedings.

The hearing was adjourned due to the absence of the sixth defendant (Agriogiannis) and will continue on Friday, October 7th, with the continuation of cross-examination of witness Abou Hamed Mohammed.