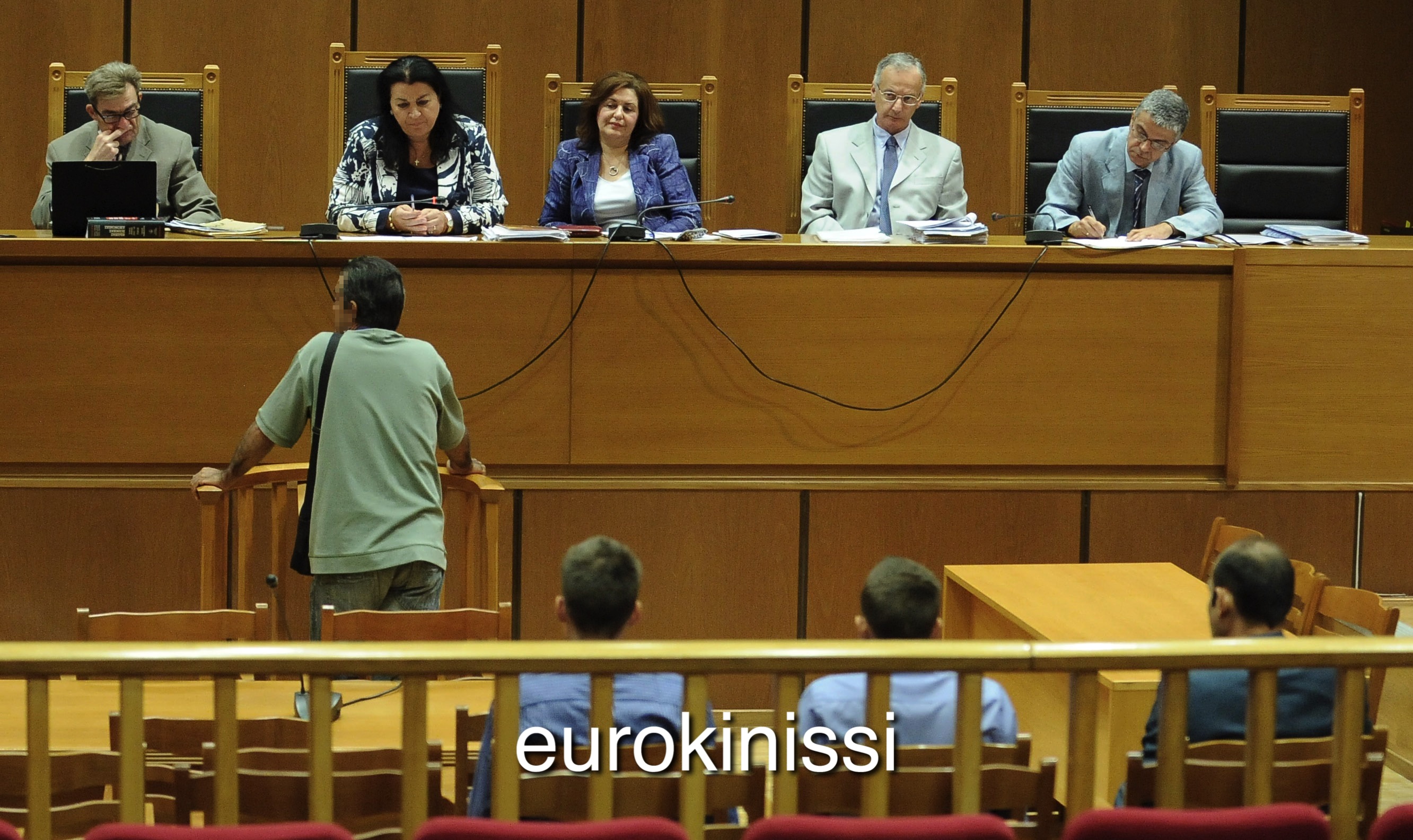 Present at the start of the hearing were three (3) defendants, two of which (K. Papadopoulos and Th. Marias) were of the five defendants that had been ordered by the court to present themselves for the case of the Egyptian fishermen. From the rest of the defendants present at the hearing was Komianos. Fifty (50) defendants were recorded as absent, while the rest were represented by their counsels. The defense counsel for Agriogiannis (also a defendant for the Egyptian fishermen case) stated that his client was en route to the courtroom, but in the course of the hearing informed the court that his client would not be present, because he was in danger of losing his job.

Civil action counsel Mr. Kabagiannis insisted in his questions on details about the noise the witness heard, and its cause. He, too, pointed out the contradictions compared to the previous testimonies and asked if the sound of a single broken window can wake up an entire neighborhood. Responding to relevant questions, the witness stated that a car window can’t be broken with a fist, but with something else, however he couldn’t say if it was wooden or steel. He went on to mention that lots of residents had come out on the balconies and that they had turned on the lights, and that there were people closer to the incident than him, but they approached the scene when the assailants had left. Responding to the question by Mr. Kabagiannis why these neighbors hadn’t been called by the police to testify, the witness answered that he didn’t know why. Mr. Tatsiopoulos went on to state, in response to another question, that the same group that had damaged the car had attacked the Egyptian, and that he didn’t know the reason. He said that Mohammed never said that the assailants went in the house with robbery in mind. Responding to a relevant question, the witness said that Embarak had been hit in the jaw and was unconscious. When shown some photos by the civil action counsel he found it difficult to recognize the victim after the attack, since his face was swollen by the hits. The witness also seemed like he couldn’t tell apart the two brothers, Ahmed and Mohammed.

Responding to questions by civil action counsel Mr. Tzellis (for the Fyssas family), in connection with his testimony before the investigating judge in November 2013 said that they asked him how they did all that, and he answered obviously with clubs and crowbars, however he himself never saw these weapons. He reported that initially he didn’t think the group were members of Golden Dawn, but he went on to change his mind, because nothing of the sort had ever happened in the neighborhood. He also said that the Egyptians were peaceable people and had been living at the house for the previous 3 years. He reported that he has heard of other Golden Dawn incidents from the TV, and especially the murder of Pavlos Fyssas by Roupakias, and regarding Perama he said he doesn’t frequent it, and hasn’t gone there in three years.

Responding to questions by Ms. Kougiatsou he said that he didn’t have the time or the visibility to see what each of the assailants were wearing or holding, and that if they had been holding wooden clubs and crowbars he would have seen them. Also, that he never saw any stones. Responding to questions by Ms. Christodoulou he answered that he had heard that Golden Dawners went out during the night and patrolled on motorbikes. Responding to a question by Ms. Tobatzoglou he said that following the incident he never discussed it with anyone in the neighborhood.

Responding to questions by civil action counsel Mr. Sapountzakis (for the PAME members) the witness said that the attackers might have hit the Egyptians’ cars because they could have previous differences to settle, though he admitted that the Egyptians were peaceable and quiet and they had no previous contact with Golden Dawn. Finally he said that it didn’t look normal that so many people had gathered wearing black clothes, and that all together came to damage specific cars, and that they must have followed them in advance. Responding to a question by Mr. Antanasiotis he said they were members of Golden Dawn because that’s the impression he had, because they were shouting. Responding to a relevant question he answered that the people in the neighborhood believed that Golden Dawn had come and beaten up the Egyptians. Concerning the contradictions with his previous testimony to the civilian investigator, he stated that he hadn’t seen crowbars, but that he supposed that that’s what they used to break the cars, and that no other possibility has been put forward. As for the assailants he stated that they were youngsters, some with thin legs, some short and others tall that made a racket. The court rejected a motion by Mr. Malagaris and Mr. Vrettos to ask of the witness if the body type of the defendants present matched the body type of the assailants.

Responding to questions by Mr. Theodoropoulos he answered that he didn’t see any stones on the steps leading up to the entrance of the house and that the group was shaking the car back and forth to cause damage to it. He pointed out that he was the only one called to testify, despite the fact that he had seen nothing, and that the one next to his house and the one after him live on the opposite side of the street and had a better view. He didn’t go near the scene of the attack because the racket made him fearful, and when asked said that now he was not afraid. He also said he saw the assailants leave the house and with some others that had come from another street ran together downhill, and when asked said he was not feeling fear.
First to take the floor from the side of the defense counsels was Ms. Poulia. The witness stated that he was taken to the police station in a patrol car. When he got there he was shown certain persons, of which he recognized no one, reporting that they were wearing trousers when the ones he had seen had been wearing shorts. In photographs he was shown from June 2011 he recognized the Egyptians’ house and said it’s in a dark spot and that on the night in question there was no light. He also said that if 10-15 motorbikes arrived all at once he would have heard something, however he saw nothing of the sort on the adjacent street. He also mentioned that there are stones to be found 10-15 m away, that the perpetrators could have found them, and that he saw the people in the street when they were coming down the slope of the hill. Responding to questions by Mr. Bouritis he reported that Embarak was unconscious and that he couldn’t walk, and that’s why he got him by the legs, to help put him in the ambulance. Responding to a question why after 18 months he used the word “head” instead of the word “face”, he said that for him the two words were synonymous. Concerning his mention of clubs and crowbars in his second testimony before the investigating judge the witness said that he hadn’t been asked anything about the matter during the first testimony and that maybe he hadn’t seen correctly.

At this point the presiding judge asked whether the testimony was false, because it was of great importance to the court, and the witness said that he assumed it. Responding to another question he said he assumed the group were members of Golden Dawn because they left rapidly and because Mohammed told him his brother had been hit with fists. Responding to a question by the presiding judge he said that what he saw could have been the result of multiple punches, or from a small steel instrument. He also stated that he can’t recall exactly what Mohammed told him, only that he [:Embarak] had been hit by a fire extinguisher as he was sleeping on the roof.

At this point, too, the presiding judge pointed out the contradictions between his testimonies and said that his testimony could be labeled as untrue. The witness reacted by saying this was the reason he had an argument with the policeman, because “he didn’t want to get into trouble”. In another question by the defense counsel he said that in general the features of the people he was shown didn’t match the figures he had seen, and at this point the presiding judge told him to ask for clarifications when asked general questions, asking him “can you say that they were all extremely tall?”
The witness said to Mr. Kontovazenitis that he went twice to a Golden Dawn food handout when he was unemployed, and that food supplies were given only to Greeks on presentation of a state ID card.

In another question by defense counsel Mr. Tsagas, he clarified that the food charity that was operating in the basement, and which was handing out food to immigrants, was a union that had no connection to Golden Dawn. Concerning the attack in question he reported that he didn’t see any Party logos nor did he hear any slogans.

Responding to a question by Mr. Zografos he said that the estimate of 30 assailants that he had given to the investigating judge had been exaggerated and that he hadn’t been the one that had called the police. Then he said that he saw broken glass on the scene of the attack, among other things, but he didn’t see a fire extinguisher.

When questioned why he didn’t tell the policemen that the assailants were members of Golden Dawn, since they police was already searching for the perpetrators, he said that no one asked him, and that he didn’t want to say anything because Mohammed might have been lying. He also stated that it was dark and he couldn’t have been sure even if they were supporters of Olymbiakos [:a well-known football team] or members of KKE [:the Communist Party of Greece] or something else. When asked what happened in the meantime and he changed his testimony after 17 months he answered “nothing, maybe they asked me what Mohammed had said”. The presiding judge then intervened once more to read aloud a part of his testimony, and asked him whether he would have thought the assailants were members of Golden Dawn without Mohammed telling him so. The witness answered in the affirmative, stressing that no one wants to get implicated in these things, but then clarifying that he does not fear for his life.
In another question he answered that he hadn’t been influenced by what he saw in the media after the Fyssas murder in September 2013, when he testified before the investigating judge.

In response to a question by the defense counsel for I. Lagos he answered that he didn’t know whether the Egyptians had any differences with other fishermen or slavers, and furthermore that he didn’t remember Embarak to have worked in a fishing vessel and not receiving his wages.

When the testimony of witness Tatsiopoulos came at an end, witness Abu Hamed Mohammed was called to the stand. He hasn’t applied for civil action within criminal proceedings, and stated that he requests the help of an interpreter. The hearing was adjourned for October 5th, 2016, at which point the court would provide an interpreter and a volume of the Quran.