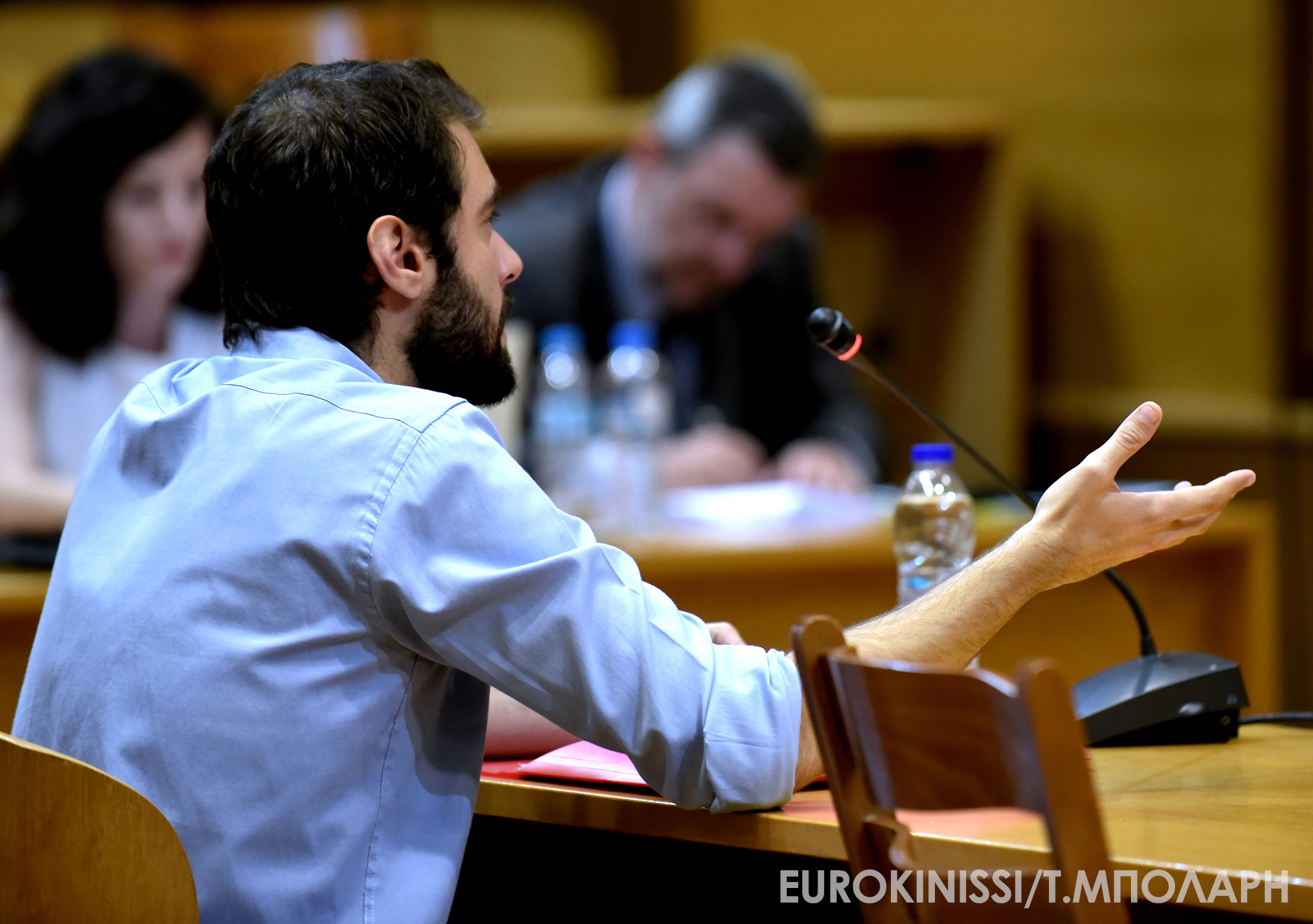 Responding to questions by the presiding judge the witness stated that he is a journalist since 2012, and that he is working for the newspaper Efimerida ton Syntakton, exhaustively researching the activities of Golden Dawn. The reason that drove him to pursue this subject was the escalation of Golden Dawn activities and the entry of the Nazi organization to the Greek Parliament. He explained that he calls it “Nazi” because he has seen a video from a Nazi concert in Peristeri in 2005, which was attended by the leader and prominent members of the party, such as Matthaiopoulos, Kasidiaris, and Germenis. He mentioned the use of Nazi symbols, such as the Celtic cross, and chants such as Sieg Heil (“Hail victory!”) and Blut und Ehre (“Blood and Honor”), which have been used extensively by Golden Dawn. The witness added that he has been assigned the research into the escalation of the racist attacks from 2012 until today, as well as the observation of a series of trials that are pending, in which defendants are various members of the party.

Concerning the violent racist attacks, he testified that he has spoken personally with victims of attacks. He gave some examples, and said that he has spoken with an Afghan man who was attacked in Veranzerou Street on September 7th, 2013. Two men entered his house posing as policemen, along with Dimopoulou, who was a candidate of Golden Dawn in the elections of 2012. They told him that from now on he would have to do everything Dimopoulou was saying because she was the leader of the apartment block and asked him to leave, or else they would kill him and his children. Then they started hitting him on the head. The witness said that when he went to the apartment block in question, he saw that the doors of the apartments where immigrants were staying had been marked with the Celtic cross, a Nazi symbol.

Concerning Dimopoulou, he said that she used to conduct checks escorted by musclemen, in Veranzerou Street and the area around Omonoia. She invaded the house of a Chinese woman, whom she attempted to strangle, and participated in the assault squad that attacked the shop of a Bangladeshi man, whom they also beat up. All the things that he knows he knows from extensive personal research, from sources that he is not in the position to name in court, and from the victims of attacks, which he named. He also said that on 2009 Dimopoulou and other Golden Dawners, such as defendants Panagiotaros and Skordeli, pressed charges in Agios Panteleimonas against various persons, such as Voudouris, because he was an administrator for Indymedia, as well as Savvas Michail, for his books and his chants.

Concerning Skordeli the witness said that she is also pending trial for the stabbing of an Afghan immigrant in 2011, and that everything that he knows he learned from the victim who was attacked along with two other men by a 15-strong Golden Dawn assault squad and was stabbed four times, after sustaining a hit on the head with a beer bottle. The man pressed charges, but the trial has been postponed twelve times since 2011. The trial for this particular case commenced in earnest only in 2017.

Concerning the Fyssas case he said that he is in a position to know things because of the lift of telephone communications privacy. Kazantzoglou, who is responsible for the activities of assault squads in Nikaia, called Aggos, and then Kazantzoglou called Patelis, and then a message was sent by members of security, Korkovilis and others. The witness testified that the message said “Everyone now in the local chapter. We won’t wait for those far away”. Then, for about fifteen minutes, there was a pause in telephone communication. Earlier, there was a telephone call and an sms sent to Lagos. Around 00:15 Patelis and Roupakias talked on the phone, at the time when the latter was being held in the police station, and an almost concurrent telephone conversation between Lagos and Patelis. The witness said that on the night in question, the targets were Fyssas and his friends, who was a well-known leftist. When asked if the attack was a decision of Roupakias, the witness said that under no condition this was his own initiative and added that apart from the telephone conversations on the night of the attack, there are videos that show Patelis, the head of the local chapter, in which he details the hierarchical structure of the organization. The witness added that Kasidiaris, Lagos, and Panagiotaros had made statements in Keratsini and Perama, saying that because of Golden Dawn’s activities on the streets, “Piraeus will turn from red to blue”. This is the party line given by the leading members. He also stated that Michaloliakos, in a speech in Hotel Crystal in 2012, said that “Whoever passes outside our offices either runs or doesn’t have time to run”. This is a general order from the leader and, according to the witness, the members don’t need anything more to perpetrate attacks, and he mentioned examples of similar attacks near Golden Dawn offices all over Greece.

The state prosecutor then asked the witness if he has ever interviewed a member or leading member of Golden Dawn. The witness said that he has never done so nor does he ever intend to. The state prosecutor asked the witness whether during the concert he mentioned earlier, he heard any of the attendants advocating violence. The witness answered that there were songs whose lyrics said “I’ll bomb Israel”, and “Africa is for monkeys”, things that show the violent and racist nature of Golden Dawn.

Responding to questions by the deputy state prosecutor concerning the frequency of the attacks the witness said that the attacks are not carried out with the same frequency. He explained that in 2012, the leader of the party had said that they will go into the Parliament to tear it down, and Kasidiaris was telling that Golden Dawners don’t want anything to do with parliamentary duties. However, nowadays they make full use of parliamentary privileges, such as weapon licenses and non-prosecution clauses. The targets and activities were increasing, as he said, it wasn’t just the immigrants, as “subhumans”, but also Golden Dawn’s political opponents. However, since this trial started and while it is pending, there is a decline in the number of attacks, which is accompanied with statements such as the ones Koukoutsis made in the local chapter in Sparta, who asks of the members to keep national socialism within them and to not show their muscle as often, exactly because the trial is pending. In conclusion, the witness referred to the similarities between the attacks and the military training of members and leading members.

Responding to questions by the civil action counsels, the witness referred, among other things, to Antonios Androutsopoulos (Periandros) quitting Golden Dawn, who was convicted of an attack he carried out in 1998. After he left Golden Dawn, he said in a conversation which has been recorded, that if he talks, Michaloliakos will be convicted as an instigator and Panagiotaros as the perpetrator, and he admitted in a talk he gave in Larissa, that Michaloliakos sent them out to commit crimes. The reason for his leaving Golden Dawn, as Periandros said, was on one hand the fact that he no longer believed in the nationalist-socialist ideology, and on the other the fact that Golden Dawn did not cover for the members that had been arrested for criminal activities.

The witness then referred to many videos that have been leaked to the press, which show the members of Golden Dawn impersonating authority and commiting various criminal activities, or making statements that prove they support the use of violence. The witness testified that Michaloliakos said that after Kasidiaris slapped Kanelli, Golden Dawn’s poll results jumped by two percent. The witness went on to say that they try to cover up their participation in violent attacks, but that there’s proof of the contrary and that they change their statements depending on the evidence. More specifically, the witness said that Kasidiaris had said in the Meligalas event that Golden Dawn had nothing to do with the attack on the PAME members, but when, in 2014, the conversation between Lagos and Tzevelekos was leaked, Lagos said that it was the members of PAME that had attacked them. He added that the conversations between Lagos and Pantazis show that Lagos was in communication with Pantazis during the attack and that he wasn’t briefed later. The witness also said that after the attack, the attack was not denied and none of the members that had participated was kicked out from the ranks of the party. Quite the contrary, Lagos and Pantazis were upgraded.

Responding to further questions, the witness said that the Nikaia local chapter was a model of disciplined order and that its members often visited chapters in other areas, even outside Athens. There’s even a video from a gathering in the Nikaia chapter in March 2013, attended by Kasidiaris, Lagos, and Iliopoulos, who say that they want to go to the rest of Greece and talk about the way the Nikaia chapter operates. Finally, he said that from the research he has done he is in a position to know that in the Nikaia local chapter, Kazantzoglou is the leader of the assault squads, Tsakanikas is the resident ideologist, Roupakias is responsible for financial matters, and Patelis is the head of the local chapter. The witness said that this can be shown from the talks given in Neda. As for the position of Roupakias as chief financial officer, he said that they found a document in the local chapter’s accountant which proves the fact. Finally, the witness said, that the lift of telephone privacy in the Fyssas case showed that Aggos is a subordinate of Kazantzoglou.

At this point, amid protests from the side of the defense, the presiding judge adjourned for Wednesday, June 5th, 2017, in the Women’s Wing of Korydallos Prison.