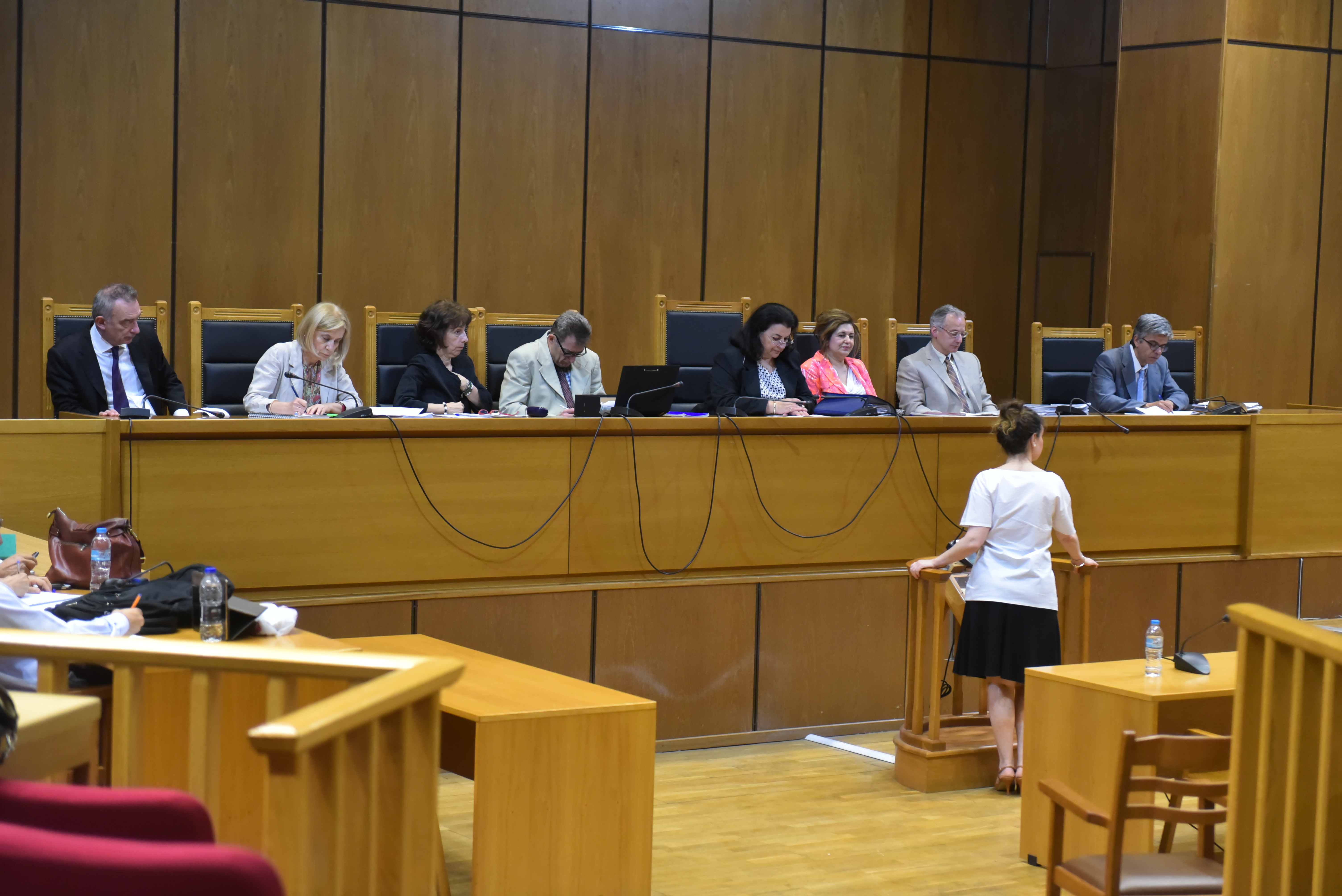 DAY 165:“RACIST VIOLENCE IS UNPROVOKED AND ITS CAUSE IS THE STATUS OF IMMIGRANT”

The courtroom remains open to the public upon presentation of a state ID card, which is retained by court authorities for the duration of the session. There were some spectators present, the usual number of police officers, and satisfactory attendance by members of the press. Outside the Court of Appeals a group of people from the Movement “Deport Racism” had erected a banner.

Responding to relevant questions the witness stated that he is no longer a member of the Socialist Workers’ Party, and then referred to the celebrations concerning Imia, saying that Imia is for Golden Dawn an event comparable in significance to the Athens Polytechnic Uprising. Golden Dawners from all over Greece come to Athens for the Imia celebrations, among them all those that participate in the assault squads, and every year the celebrations are followed by beatings and stabbings of immigrants by members of Golden Dawn. The witness also reported that Kasidiaris, Panagiotaros, and other members of Golden Dawn that had participated in a TV talk show admitted that Golden Dawn had resorted to violence, saying though that they had first been attacked. The witness referred to the incident at the Old Court of Appeals, and to the incidents in Agios Panteleimonas, and said that there was a group in Agios Panteleimonas that was on 24-hour patrol in order to prevent immigrants from remaining in the square. Any immigrant who was found on the benches or around the square was harassed. Responding to other questions he said that a part of the residents was troubled and angry, another part though, much larger than the first, did not react impulsively and did not want to cooperate with Golden Dawn. The witness added that the strength of the movement isn’t bats and knives, but the mass participation in rallies.

During the exhibition of photos by defense counsel Giorgos Michalolias tensions escalated because a woman from the audience took a photo without having a journalist permit, something that caused the defense to erupt in protest, and the trial to be adjourned for about 15 minutes.

The witness then stated that not all residents were opposed to the building of a mosque, but merely the Golden Dawners and those that sided with them, and that the Golden Dawn stickers [:that were disseminated in the area] read “Mosque never and nowhere”.

The trial was then adjourned between 11:00 and 13:00, because the court registrar participated in the strike of the Court of Appeals registrars. When the trial resumed, the examination of the witness continued. The witness mentioned that he has heard of immigrants that were attacked by racist and fascist groups and did not press charges, as well as about clashes between immigrants, but he has never heard of the existence of an “Islamist Police”. Referring to the food handouts only for Greeks that had been organized by Golden Dawn, the witness said that such initiatives are racist in nature, because solidarity is turned to solidarity with a “nationalist” bent.

Defense counsel Tsabazis asked the witness the following: “Why do they demolish the schools built by the Greek Army in Afghanistan, and why don’t they stay in their country to get educated?” He also noted that “Most of the incidents took place in 2009. Was there a war in Syria in 2009? Why did they leave their country?” The presiding judge did not allow these questions to be answered.

When asked about the danger levels in the Agios Panteleimonas area and if they have increased with the arrival of immigrants, the witness answered that “The area is dangerous not because of the immigrants but because it has been turmed to a slum, and the poor people can’t go to the affluent quarters to live”. Concerning Skordeli, the witness reported that she was holding a bag of tomatoes and was hurling them to the witness and his comrades in the Agios Panteleimonas square.

The witness stated that she works as a lawyer, but that she was called to testify in another capacity, since from 2011 to 2014 she was a member of the Municipal Council of Athens, when Mr. Kaminis was mayor, and she had presided over the immigrant integration municipal council. She stated that the integration municipal councils are municipal institutions that are staffed by representatives of the various parties that participate in the councils, as well as by representatives of immigrant communities and non-governmental organizations. At the time there were fifteen organized immigrant communities, that had been formed in a public manner and were representing the members of the immigrant community. Today the head of the immigrant integration municipal council is Lefteris Papagiannakis, who is also a member of the Athens municipal council. The witness stated that these councils act as a communication channel between the immigrant communities and the municipal authorities. Responding to a question about her activities as head of the council, the witness stated that the council was examining what actions could be taken to advance the integration of immigrants. To that end, from 2011 onwards, the council judged that because there had been many incidents of racist violence in many areas of Athens (such as Attiki, Kypseli, Agios Panteleimonas) they decided to participate as observers in the Racist Violence Recording Network (RVRN), which had been started by the United Nations High Commissioner for Refugees and the National Commission for Human Rights. Responding to a question about why she is referring to incidents of racist violence, the witness said that “[violence] is racist, because this violence is unprovoked and its cause is the status of the immigrant”. The cause for the attacks is merely the fact that someone is visibly of different nationality, color, etc. The witness added that after 2011, when the RVRN was started, for the victims that claimed they had been attacked, “there was an organized structure which recorded what had happened to them”. At this point the witness noted that the RVRN has recorded about 154-155 incidents of racist violence since 2011. A recurring modus operandi has been observed, which is characterized by assaults that take place at night by organized groups of people wearing specific, military-style garb, very short hair, brass knuckles, even dogs sometimes. The sad fact is that only 24 of these 155 cases were brought to court.

The witness went on to say that according to data collected by the RVRN, after 2012 there was a spike in incidents of racist violence by assault squads that were operating in specific areas, and the incidents fell off significantly after the murder of Pavlos Fyssas. When asked about whether the victims were saying that the assaults had been perpetrated by Golden Dawn, the witness stated that there had been many incidents in which the assailants either said they were Golden Dawners, or were wearing shirts emblazoned with Golden Dawn insignia. Concerning Skordeli, the witness stated that she has seen her but not spoken with her, since she [:Skordeli] was a frequent visitor in the council’s open meetings and was one of the “concerned citizens” of Agios Panteleimonas, and had once taken the mic to say, referring to immigrants, “When cockroaches invade your home you must turn them out”, meaning that’s what must be done with the immigrants too. When asked whether the victims had pressed charges in all 150 incidents, the witness stated that it took effort to make the victims feel safe enough to report the incidents even to the RVRN, since they didn’t want to go to the Police, for fear of what would happen to them there. After the murder of Fyssas, however, and after the forming of the case file under deliberation in this court, there was a coordinated decrease of incidents, which shows that these particular groups know when to act, how to act, and, conversely, when to retreat. Finally, apart from the assault squads and their uniform mode of dress, the witness mentioned that in some cases the assailants had made political statements.

The witness reported that the barring of Golden Dawn from the immigrant integration council was a political decision taken by herself and the municipal authorities. When the council was formed they sent an invitation to various organizations that would want to participate. But they did not invite Golden Dawn because the objective of the council was the integration of immigrant residents. Given that during the previous months Golden Dawn was routinely using hate speech, and by taking into account numerous of their statements, they decided that GD had no place in the council. The witness added that every time a representative of Golden Dawn spoke during a municipal council meeting, she [:the witness] chose to leave the hall, as a personal statement of opposition to their ideology. When asked the witness stated that these 154 incidents are not the whole picture, since there are others that have not been recorded, mainly because the victims didn’t want to report them. Concerning the negligence of the Police in the area of Agios Panteleimonas, the witness clarified that they have recorded the denial of Police officials and officers to record incidents, but also aggressive behaviors towards the victims. The State Ombudsman issued a special report in 2016, following a 16-month research, concerning the stance of the Police in incidents of racist violence. According to the report, there have been police precincts that denied to accept legal complaints, and some that have tolerated these incidents. Responding to another question, the witness stated that if a victim did not have a residence permit and pressed charges, after the testimony, the police officer was forced to arrest the victim and start the deportation procedures. There was no way that a victim could go to a police station and not get arrested, a state of affairs that was corrected with 4251/14, article 19A, which deals with the protection of persons that are mentioned as victims.