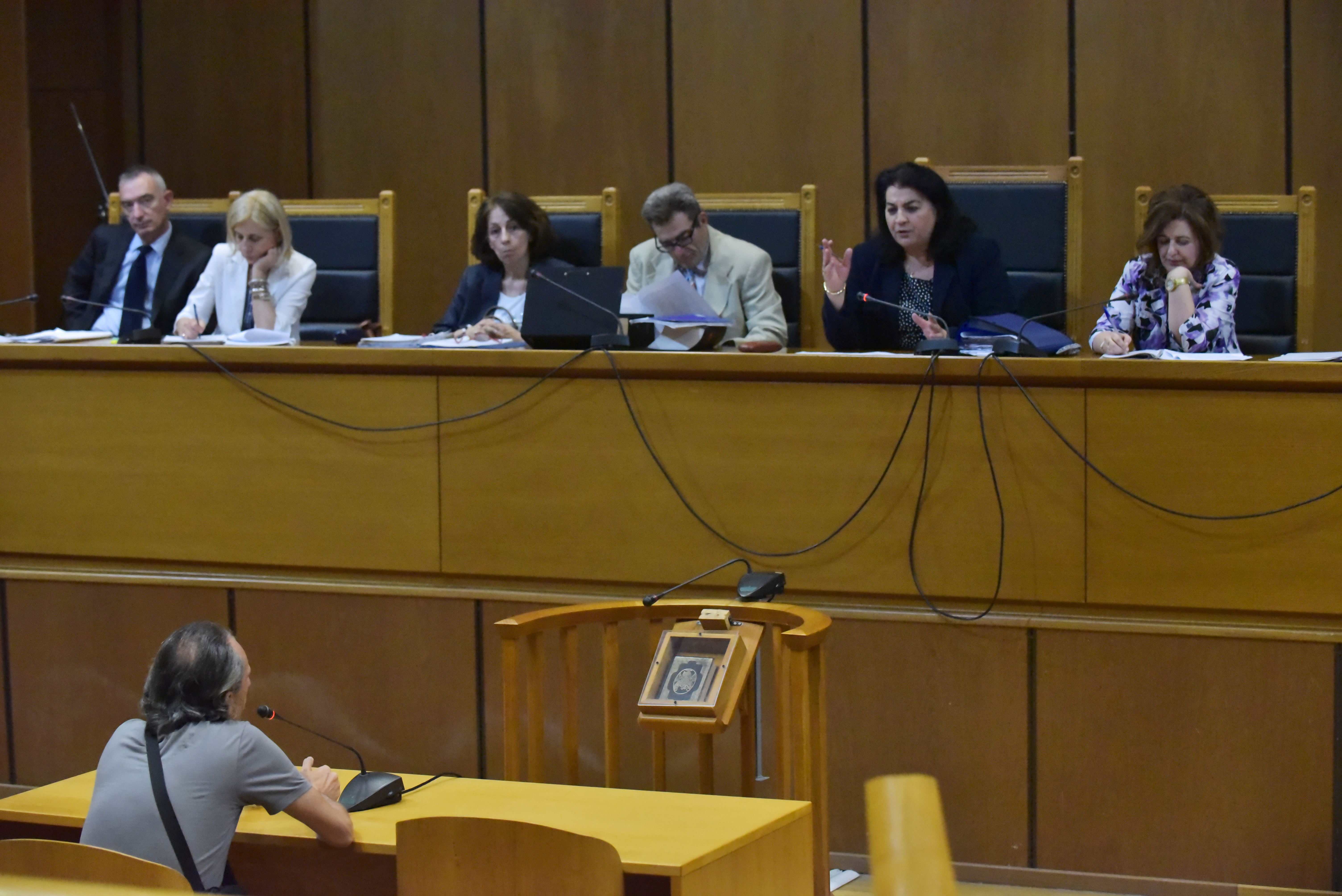 DAY 160: “EVERY ASSAULT OF UNCERTAIN OUTCOME IS POTENTIALLY MURDEROUS”

The courtroom remains open to the public upon presentation of a state ID card, which is retained by court authorities for the duration of the session, until all audience seats in the courtroom are filled. There was increased attendance by members of the press and the public, and the usual number of police officers.

A. Examination of the witness by the civil action counsels

The witness answered, in turn, the questions of civil action counsels Theodoropoulos, Papadopoulou, Tobatzoglou, Kabagiannis, Skarmeas, and Vrettos. Picking up his testimony from the previous hearing (June 1st, 2017) he stated that the assault on an election stand of SYRIZA by members of Golden Dawn was deliberate, and that it’s impossible that the leadership was not informed of the incident, after the publicity that it attracted. However, as far as the witness knows, the leadership of Golden Dawn did not make any announcement on the matter. The witness claimed that he just happened to be the victim, and that there were at least 70-100 people that were present and could have been victims as well. When asked about the police station of the area and the extent to which it made it easy for immigrants to press charges for assaults against them, the witness answered that he only knows about the B’ police precinct of Piraeus, which did nothing about complaints from immigrants, and neither did it follow the necessary procedures. Responding to another question he also mentioned that the public assaults by Golden Dawn in front of TV cameras aimed to show that Golden Dawn is beyond the law, and to instill fear. The witness also stated that many assaults had been carried out by Golden Dawn, such as the assault against the Egyptian fishermen, as well as the attacks against PAME and ANTARSYA. Responding to another question he said that he did not remember any women participating in the group that attacked him. Referring to the phrase that was heard, “No order, no engagement”, he said that it was a military order. Taking into account all the attacks as well as the incident that the witness was present at, it is clear that Golden Dawn had a certain structure, and continues to do so, which is expressed by the decisions taken by the leadership. Moreover, the witness said that there’s a decline in the number of incidents, however in 2012 and 2013 there was an escalating aggressive stance by Golden Dawn members, not only against immigrants but towards union members and everyone who they thought was their ideological opponent while, concerning their ideological background, the assaults are driven by fascist beliefs.

The witness answered, in turn, the questions of defense counsels Tsagas, Velentza, G. Michalolias, Roussopoulos, N. Michalolias, Stavrianakis, and Oplantzakis. Specifically, he stated that the moment of the attack was so intense that only one person, Pantelis Davanelos, managed to get some photos with his mobile phone. The witness added that when he pressed charges he had no idea of the extent of the targeted attacks, and so had no opinion about the structure of the organization. He surmised from the extent of the attacks that the assault against his person was not a random event, and that the assailants did not act without an order from above. The witness was asked many times about the report he had submitted to the Minister of Public Safety, but said that he was in no position to recall specific parts, since he didn’t have it on him neither did he read it before the hearing, and as he said, the police station called him 5 years later. More specifically, he received a summons dated May 30th, 2017, to testify about the events of June 2012. The witness testified that he pressed charges a short while before the three month limit had elapsed so that the incident would not be forgotten, and that the material that he collected dealt with the incidents of the days immediately after the assault, since at the time of the incident his primary concern was his own wellbeing. Furthermore he added that even though he cannot claim with absolute certainty that an order had been given by one of the prominent members of Golden Dawn to carry out the attack, the fact that the motorbikes made a big circle and parked in front of the SYRIZA stand immediately before the attack, means that it had been planned in advance. Responding to a relevant question he said that on the night of the incident he was called by a media outlet to talk about it, but he can’t recall which one. Finally, he added that, as a lawyer himself, if he had a client that had been wounded, he would have given him advice that he didn’t follow himself.

The witness stated that he has been working as a news photographer for newsbeast.gr since 2010, and that he is a news photographer since 1997. On July 4th, 2014 he went, like other photographers, to cover the transfer of members of Golden Dawn. They were MPs Michaloliakos, Pappas, and Lagos. They had been gathered in Loukareos Street [: the street right next to the Supreme Court] and at some point they saw the police van arriving with sirens blaring, followed by about 200 members and supporters of Golden Dawn. He could tell they were Golden Dawn supporters from the banners and Greek flags they carried, and from the fact that Kasidiaris and Panagiotaros directed the placement of banners and groups of supporters.

When the police vans arrived they saw people come alongside the vans and knock on the side, as a show of support to the defendants inside the vans. The riot police unit then intervened to drive back some protesters that went near the police van to attack it. According to the witness, the intervention was a strong one, since both stun grenades and tear gas was used. The witness was on the median strip along with his colleagues Menelaos Myrillas and Stratis Limnios, waiting to see how the situation would unfold. Three men came out of the group of supporters wearing black clothes and sunglasses and asked them, in a very aggressive manner, not to take any photographs. They then put their hands on his camera so that he couldn’t lift it to take a photo. This is the last thing he remembers, since at that point someone hit him on the head from the back and he collapsed on the street, where he was kicked with an army boot. The witness stated that his colleagues told him all this, since he remembers nothing from the instant that he sustained the blow to the head, and there is a video that Limnios took that shows him coming to his senses, dazed. The witness also said that the persons that approached them called them “Snitches, bastards, journalists” and at some point someone said “Stop, you’ll kill someone”. The attack stopped after the intervention of Myrillas. He was taken to the hospital where it was shown that he had some grazes in his mouth. As for the clothing of the persons, the witness said that they wore black clothes, black sunglasses, and had shaved heads. The witness pointed out many times that he can’t recall the blow itself, and that he knows only the things other people told him. Responding to a relevant question he said that they didn’t press charges because from what they heard no people were brought in for questioning and that no one was arrested, even though the police was standing a mere 15 feet away.

Referring to the coordination, the witness reported that it can be deduced from the fact that the three persons that approached them knew that the journalists were there and for what reason and asked them not to do their job. Responding to another question he said that nothing of the sort has happened in rallies of any other political party, and that in Golden Dawn rallies he is always very careful, so that he won’t get turned away, they won’t take his camera away, and they won’t beat him up.

The witness answered, in turn, the questions of civil action counsels Theodoropoulos, Vrettos, Tzellis, and Kabagiannis. He stated that the person that hit him probably was one of the three that approached him or their associate since, according to what happened immediately before the blow and the phrase “Stop, you’ll kill someone”, he was probably a member of Golden Dawn. Regarding how he would label the attack that he sustained, he said that, as far as he can tell, every assault of uncertain outcome is potentially murderous. He also said that he has enough professional experience to keep away from Golden Dawn rallies. He added that after the murder of Kadaris in 3rd September Ave., which he followed closely, along with the attacks against the makeshift mosques of immigrants, the murder of Fyssas, etc., the instinct of self-preservation kicked in, which tells him to stay away from violent incidents. The witness also testified that he’s heard that there are strike teams, the so-called assault squads, but he can’t verify that this is actually true. Responding to another question about a Golden Dawn assault against a journalist, he described an incident that took place in Piraeus, during which TV crews were attacked with crowbars, and that he has seen Kasidiaris hit a cameraman.

The witness was examined in turn by defense counsels Kontovazenitis, Tsagas, Zografou, Velentza, Oplantzaki, N. Michalolias, G. Michalolias, Roussopoulos, and Stavrianakis. He testified that he hadn’t photographed anyone before the incident took place, apart from a general view of the place of the clash, since it was a public space. The site he works for obscures the faces of people if their guilt has not been proven, or if there’s no directive from the police, so the faces aren’t visible no matter what the photos depict. In any case, he is not the person that decides what will be uploaded, since this takes place at another level. The witness said that in this particular instance there was not opposite side, and when asked a relevant question, he said that there are politicians who are displeased by cameras and the media, but not to the point of attacking someone. He also said that he doesn’t know if his colleagues talked with the policemen while he was regaining his senses. When asked about the way that the media have treated Golden Dawn, the witness said: “I would say that they [:Golden Dawn] enjoyed excellent coverage. Until one point they were at every TV talk show. I can remember many interviews and coverage in general. The people that took the interviews later became leaders of political parties”. Finally, he testified that he is very careful when covering the rallies of political parties, but that he stays away from Golden Dawn rallies.