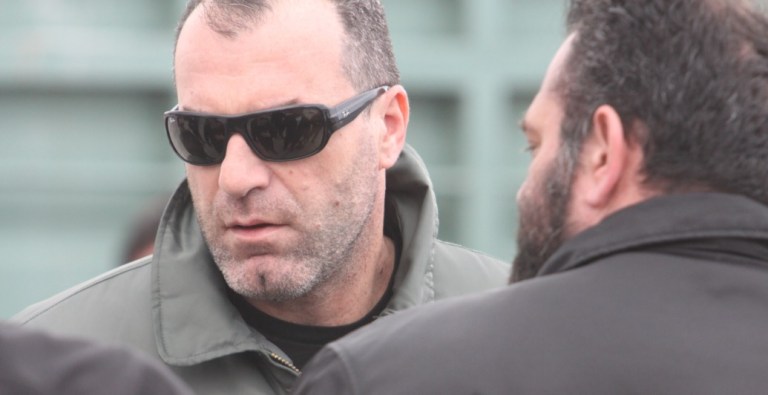 DAY 149: “ONE OF THEM WAS HOLDING US WHILE THE OTHERS WERE BEATING US”

None of the defendants were present at the hearing.

Today’s hearing dealt with the testimony of witness Savvas Mavridis, concerning the assault that took place in February 2013 in Paros.

Responding to questions by the members of the court the witness stated that he is working as a musical instruments technician all over Greece, but his base is in Paros, where he has been a resident since 2008. On February 28th, 2013, he was with Ms. Troulou, his companion at the time, who was working as a substitute kindergarten teacher for the duration of the school year in Naousa, Paros. First, they went and watched the screening of the documentary The Serpent’s Egg at the Teacher’s House, where the teacher’s steering committee was meeting. Afterwards, they went at the gathering to protest the arrival of Golden Dawn MPs on the island. The event took place in the main square of Paroikia. A lot of people showed up, around 500, and music and antifascist slogans could be heard. After a call that was issued over the megaphones, an unplanned -according to the witness- protest march took place towards the Golden Dawn venue, in which participated about 250 people, of various age groups. The distance to the taverna [:the Golden Dawn venue] was less than 1 km, but because the police had blocked access through the main street, the march went through the labyrinthine side-alleys.

Mavridis had heard that three units of riot police had arrived on the island, two from Athens and one from Syros. The witness claimed that, due to his experience with previous demos, he tries not to get trapped in tight spaces, and the alleys were the worst, given that there were three units of riot police, plus Golden Dawners. When he saw them gathering up stones, he tried to dissuade a few adolescents who were his acquaintances from clashing with the police. There were 30 people in front of him and a unit of riot police 30 m away. At the end of the alley they could see the lights of the taverna’s entrance. There were about 15 people outside the taverna, behind the policemen.

Before the march was over, the witness saw they were using teargas, felt the sting in his eyes, and he couldn’t see well. He started to fall back, but saw that Ms. Troulou did not do the same, but was heading to a balcony at a height of about 80 cm. He went towards Troulou, while the policemen advanced towards the body of the march, in order to start pushing back the protesters. He got on the balcony behind Troulou, and as she was trying to sit down, a muscular man appeared, with a big, dimpled chin, double the size of Mavridis, about 6’ 3’’, who was wearing a jacket. Mavridis testified that he saw that man come out between two riot policemen, but he wasn’t a policeman because he was wearing civilian clothes. When Troulou tried to get up, the muscular man grabbed her by the hair and knocked her head on the wall. The witness testified that on the balcony were, apart from the Dutch journalist, other people known to him, among them some people that had participated in the march, that in the course of events had been pushed back by the others.

He tried to take Troulou and get away, thinking she had lost her senses. At that point, Troulou was hit on the head by a metallic object and started bleeding. The muscular man tried to pull her away from the witness but did not succeed. The assault went on and the witness started getting hit by metallic objects by 4-5 assailants that had mounted the balcony. According to the witness, these people were in concert with the first assailant, saying that “one of them was holding us and the rest were beating us”. He was beaten on the sides for about a minute and a half. At some point the beating stopped and he saw a man in a police cap, and then more who tried to stop the assault by hitting them, too, trying to separate them. The witness supposed that the man in the cap was the head of the riot police unit, who managed to separate them from the assailant, while at the same time the witness was hit again by someone to his left. They went towards the parking lot on foot and then headed to the health center.

Mavridis testified that he got 17 stitches on the head, saying that the attack with metal objects caused him head injuries that kept him off work for 3 weeks. He pointed out that the doctor behaved in a sarcastic way, saying that “they got what they asked for”. The witness said that other people had been injured, among them a student, but nothing very serious.

The witness said that he didn’t know why they had been attacked. He supposed that maybe they had been seen getting out of the documentary screening, since he had noticed two muscular men checking out the people that were coming out. They weren’t from the island, and he said so to Ms. Troulou. Responding to questions by the presiding judge, he stated that they were between the 50 people that were at the head of the 300-strong march. The witness maintained that the assault started from the people that were behind the policemen, who started pushing and tried to get through, and were throwing rocks and objects, even before the teargas was used.

Mavridis testified that he identified the assailant later, when Troulou showed him a photograph in the Health Center, after she had talked with the journalist from the Voice of Paros. He recognized his face and later learned that he is a member of parliament. The police arrived much later, but he didn’t testify, only Troulou did. The witness did not press charges dissuaded by the fact that the assailant was a member of parliament, and also because such a legal action would act as more of a threat against their own persons, given the support that Golden Dawn enjoyed at the time. He stated that a trial in Paros for this case would be a joke, since, as he said, “we are dealing with a criminal gang”. He added that the next day he didn’t go down to the port, because he was in a bad shape from the injuries he had sustained, and the village he was staying at the time was 25 minutes away and he couldn’t drive.

Responding to questions by the state prosecutor, he stated that Michos hit him, but he didn’t see him hold anything, and he also said that the police did not show him any photographs. Responding to questions by the deputy state prosecutor he said that the people that debarked at the island were muscular and were wearing a uniform-like combination of clothing, i.e. camo pants, and some were wearing black shirts emblazoned with the Golden Dawn initials, and that he had seen them sit in a café earlier. The witness testified that he participated in the protest because Golden Dawn has an ideology that is Nazi, is a public enemy, and lies outside the democratic spectrum. He referred to the attacks against the fishermen, and the murders of Fyssas and Luqman. He also talked about the assault squads, which are in effect Golden Dawn’s operational arm, and made special mention to Ag. Panteleimonas, where, as he said, Golden Dawn had assumed the role of the police, and more besides. He said that the attack had been organized, that the assailants had been armed with objects and a target, and he named Michos as the commander, who called the target and the rest followed.

Responding to questions by the civil action counsels, the witness answered that Golden Dawn started as a criminal gang and evolved into a political party. Concerning the assault on their persons, he said that Michos would have killed Troulou if the witness hadn’t taken some of the beating himself, and that there was a chance of permanent damage. He stated that anyone could have found himself in his position and that the people he saw in Paros resembled the members of assault squads. He added that the policemen could see that it was Michos that attacked them and it follows that they recognized him, something which shows that the MP enjoyed a kind of immunity. The next day, Golden Dawn posted an article on its webpage bragging about their “deeds”. He referred a teenage girl that had been attacked by an immigrant on the island, which coincided with the attempts of Golden Dawn to secure a presence in the island, and a few Golden Dawners had appeared making checks in the immigrant community.

When shown photographs, the witness identified the taverna that hosted the Golden Dawn event, as well as a MP holding a banner that belonged to the protest march. In the next photo he is shown stamping it to the ground. When shown photographs that contrasted with the photos the defense showed during the previous hearing, the witness identified Michos dressed in dark clothes inside the taverna and wearing a jacket outside that same night. Responding to relevant questions the witness said that in the joint interview they gave with Troulou they described Michos, saying he was a leading member of Golden Dawn, but refrained from naming him outright in order to protect themselves.

He described the assailants that were waiting on the balcony and said they had been wearing the typical uniform of assault squads and that they weren’t from Paros, because he hadn’t seen them before. He later heard they were members of the Nikaia chapter of Golden Dawn, chief among them Patelis, whose family hails from Paros. Finally, he stated that the fact that Kasidiaris pressed charges against the witness in his trial contributed to the witness’s decision not to sue Michos.

C.Examination of the witness by the defense counsels

Responding to questions by the defense counsels, the witness said that he was called by the investigators to testify. He said that he participated in the protest because they didn’t want Golden Dawn on the island and mentioned the incident of a check on a Pakistani man that was working in a super-market on the island by persons that looked like Golden Dawners.

He said that he went on the march to escort Ms. Troulou and not to clash with the opposite parties. He went to the port that same night of his own volition, because he was asked by the police and to escort Ms. Troulou. He pointed out that if the police had permitted the march to take the main street the march would have ended peacefully and the protesters would have stopped at a safe distance from the taverna. When the defense counsels showed him photographs he described the course taken by the protest march, the main street that the police had blocked, the positions held by the riot police units, and his own position. The witness stated that they knew of Golden Dawn’s racist ideology, and that Golden Dawners are opposed to anyone that disagrees with them, and that’s why they didn’t want them on the island. Finally, he stated that he did not show an aggressive behavior, and one thing that proves it is his occupation.