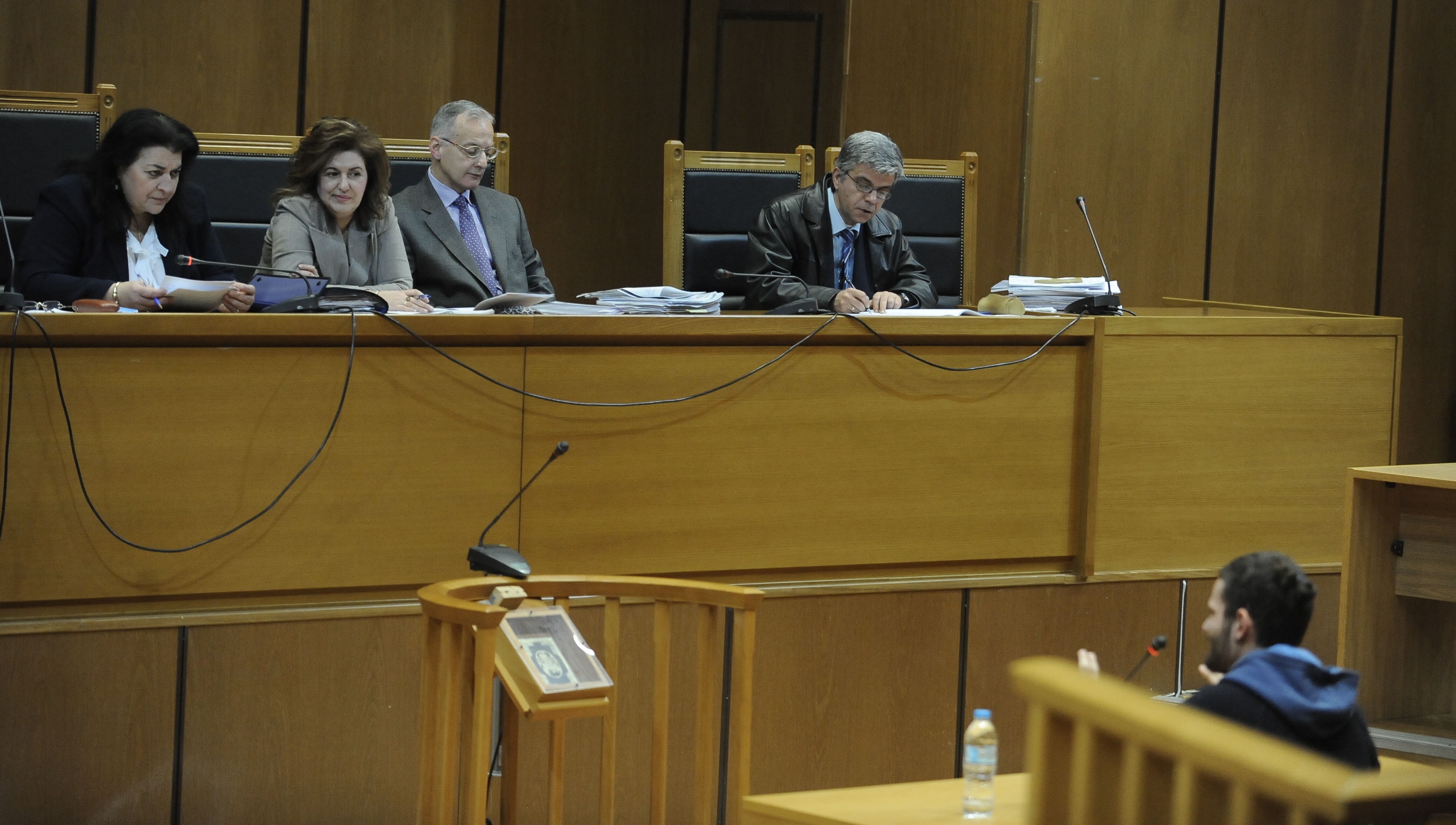 DAY 137: “THEY WERE LOOKING FOR A FIGHT, FOR VIOLENCE”

The courtroom remains open to the public upon presentation of a state ID card, which is retained by court authorities for the duration of the session. There was significant attendance from members of the press, reduced public attendance, and increased police presence in the courtroom.

Responding to questions by the presiding judge the witness stated that he is studying as a network technician, and that he is fairly focused on his studies.

The attack took place when he was a student in the 2nd year of Lyceum. More specifically, he was a classmate of Artemis Kambioti, with whom he was close friends in high school. When she came back from summer vacations in 2012, Artemis Kambioti appeared very changed in school, in appearance as well as beliefs: she was openly supportive of Golden Dawn. She was also in a relationship with Giorgos Apostolopoulos, who at the time was about 20 years old and a Golden Dawner. The witness testified that he has never talked with Apostolopoulos, but that he knows what he looks like. At the time Apostolopoulos and his friends were frequenting the small park next to the school (3rd Lyceum of Paleo Faliro). They were 4-5 people (one woman among them) who looked like they were Golden Dawn, and were going there to hang out 3-4 times a week, probably because Apostolopoulos waited Kambioti to finish with her classes.

When the school year started in 2013 the witness told Kambioti many times what he thought, he advised her not to have anything to do with Golden Dawn and violent people because she’d get into trouble, but his advice fell on deaf ears. As he said “Kambioti herself boasted that she was a member of Golden Dawn, that she had gone to the local chapter, and that she had a membership card”. Furthermore, the witness had gone to the desk of Kambioti -which at the time she had filled with fascist symbols- and, as a joke, wrote the word “ANTIFA”. Kambioti was enraged and screamed at him to erase it, but he didn’t. Some days later, after school, the witness was sitting with his friends on a bench in the park next to the school, and Apostolopoulos and Kambioti were sitting in another bench. When the witness and his friends got up to leave, Apostolopoulos approached Iasonas Kaloudis [:a friend of the witness] and told him that if the witness “writes Antifa slogans ever again, he’ll die”. The witness never bothered Kambioti ever again. Responding to questions by the state prosecutor, the witness denied that he was pressing Kambioti “to get back together”, as she had claimed in her own hearing testimony. The witness believes that this is an attempt to provide a cause for the attack on his person.

About 4 months after the aforementioned threat he was stabbed on the morning of January 28th, 2013. He was attacked by Apostolopoulos and Chatzipavlidis (whom he had never seen before), they stabbed him, and he went to the hospital.

The witness is of the opinion that they could have attacked anyone who had beliefs contrary to their own. The witness mentioned that he wasn’t politically active, that he had never taken part in the elections of the 5-member or the 15-member school committees etc. Contrary to other classmates who openly berated Kambioti for her beliefs (“fascist”, “Nazi” etc.) he had never done so, apart from a few remarks and the writing of the word “ANTIFA” on her desk. The witness also referred to the previous incident involving Kimonas Koursopoulos. Even though Koursopoulos had openly insulted Kambioti and had also been threatened (probably by the friends of Apostolopoulos), in the end it was the witness that was attacked. The witness believes that this had to do with what he had written on her desk and with the fact that Kambioti knew more about him, since they were in the same class and so she could easily track his movements, where he was going, with whom, and when. According to the witness, “when you attempt to murder someone it’s important to know these things”, and he added “their motive was to make a show of strength, and instill fear. […] They weren’t only looking for me, it would be nothing to them if both of us died, Koursopoulos was very lucky”.

After the attack, when the witness had been discharged from the hospital, for months the phone at his house rang and whoever called hung up without saying a thing. Outside his house they had painted slogans and swastikas and the whole neighborhood was covered with graffiti, some of which contained his name.

The witness explained that the slogan “ANTIFA” which he wrote on the desk was antifascist and that it bothers the supporters of fascism, such as Kambioti, who had stated she was a member of Golden Dawn, and Apostolopoulos, who had similar beliefs. According to the witness, their ideology is that “they hate everything that is contrary to their own beliefs. And they use violence”. The goal of Apostolopoulos and Chatzipavlidis was to kill him. He is still afraid, even now. His classmates and friends were afraid to come forward and testify.

The witness believes that he had been “marked” and he referred to a text message that Apostolopoulos sent to Kambioti after the stabbing, when he said that he [:the witness] had gotten off lightly [:because he had been stabbed and not killed]. Responding to questions the witness referred to other violent incidents that had taken place in the same period, such as the knifing of a cyclist. The witness believes that they wanted to terrorize not only him “but the whole school, the whole of Faliro. Everyone”.

The witness has seen Kambioti’s Golden Dawn membership card, because she had shown it, and she also said that Apostolopoulos had one, too. Today they are trying to hide the fact that they were members of Golden Dawn, due to the legal troubles they’re in. The witness connected the attack on his person with Golden Dawn because Apostolopoulos believed in an ideology that “promotes violence”. As he said, “You don’t just pick up a knife and stab someone. This was his ideology, which is not something contrary to what Golden Dawn stands for”.

As for the assailants’ motive, he said that even today he doesn’t know exactly what it was but stressed that it must have been ideologically connected to Golden Dawn. The witness clarified that at the start of the school year he advised Kambioti to distance herself from the Golden Dawners she was running around with, and not specifically Apostolopoulos, whom the witness never mentioned.

When asked whether he knew that Antifa is an international organization, the witness said that he did and that when he wrote it on Kambioti’s desk he was aiming only for the effect of the meaning of the word, which is antifascist. That’s why he wrote it in Greek.

As for the text messages that Kambioti exchanged with Apostolopoulos, the witness testified that many of them had a political bent and that she was seeing everything through a political filter, even though the witness had never again spoke to her about politics.

Defense counsel Papadellis pointed out that the witness testified for the third time on March 8th, 2013, when he was still a minor, so he shouldn’t have taken an oath.

Responding to questions by defense counsel Roussopoulos about whether there are differences in the appearance of goths and Golden Dawners, the witness answered that Kambioti wasn’t a goth. As he said, “both groups wear black, but goths don’t look at you funny, they live and let live”.

The witness stated that she is the mother of the previous witness, Foivos Demertzidis. She has known Kambioti since her son was in high school, because they were friends with her son, and she was the only girl in their group. At some point, in Lyceum, the witness stopped seeing her in the group of her son’s friends. She asked her son what had happened, and he told her that they had political differences, since she was supportive of Golden Dawn. She also heard that Kambioti was in a relationship with a Golden Dawner named Giorgos, whom she had married according to the Ancient Greek customs of the gods of the Olympus, sometime before Christmas of 2012. The witness thought Kambioti was a good girl and had told her son to try and talk sense to her.

When her son was stabbed and the witness visited him in the hospital, he told her right away that “Artemis’ boyfriend” had done it. Her son wanted to call Artemis from the hospital to tell her to be careful, lest her boyfriend do the same to her. The witness explained that it was logical for her son to think that, since the assailant stabbed him without even knowing him, so he could very well stab Artemis in a fight. According to the witness, Foivos told her right away that the persons that attacked him were fascists, but she doesn’t remember if she had stated it in her preliminary testimony, since she was in shock.

She pointed out that her son is a sensitive kid, has an artistic streak, and didn’t have solid political views. She believes that Golden Dawners stabbed him to “clean up the area”, to set an example. The witness noticed that after the stabbing those “thugs” stopped coming at the small park. They had filled the neighborhood with graffiti that mentioned Foivos by name, and made frequent prank calls, without saying anything. Once, though, in April 2013, someone called her with his voice distorted and told her that “the first time your son was lucky, but next time we’ll bring you his head on a plate”.

The witness had met Kambioti’s father in school, who told her that due to the incident no other school would accept her. For some time, Foivos took lessons at home, because of his injury, and when he went back, he changed class of his own accord, to be away from Kambioti. The witness testified that Kambioti was saying that Foivos was pestering her, probably to provide a cause for the fact that he had been stabbed.

The witness stated that if matters of the heart had been responsible for the stabbing, Apostolopoulos would have probably talked straight with her son, “man to man”, he wouldn’t have stabbed him. She also said that only Golden Dawners conducted marriages according to the Ancient Ggreek customs of the gods of Olympus. The witness was questioned only by civil action counsel Sapountzaki, because there was a (slight) altercation between counsels, and the court adjourned for the next hearing.