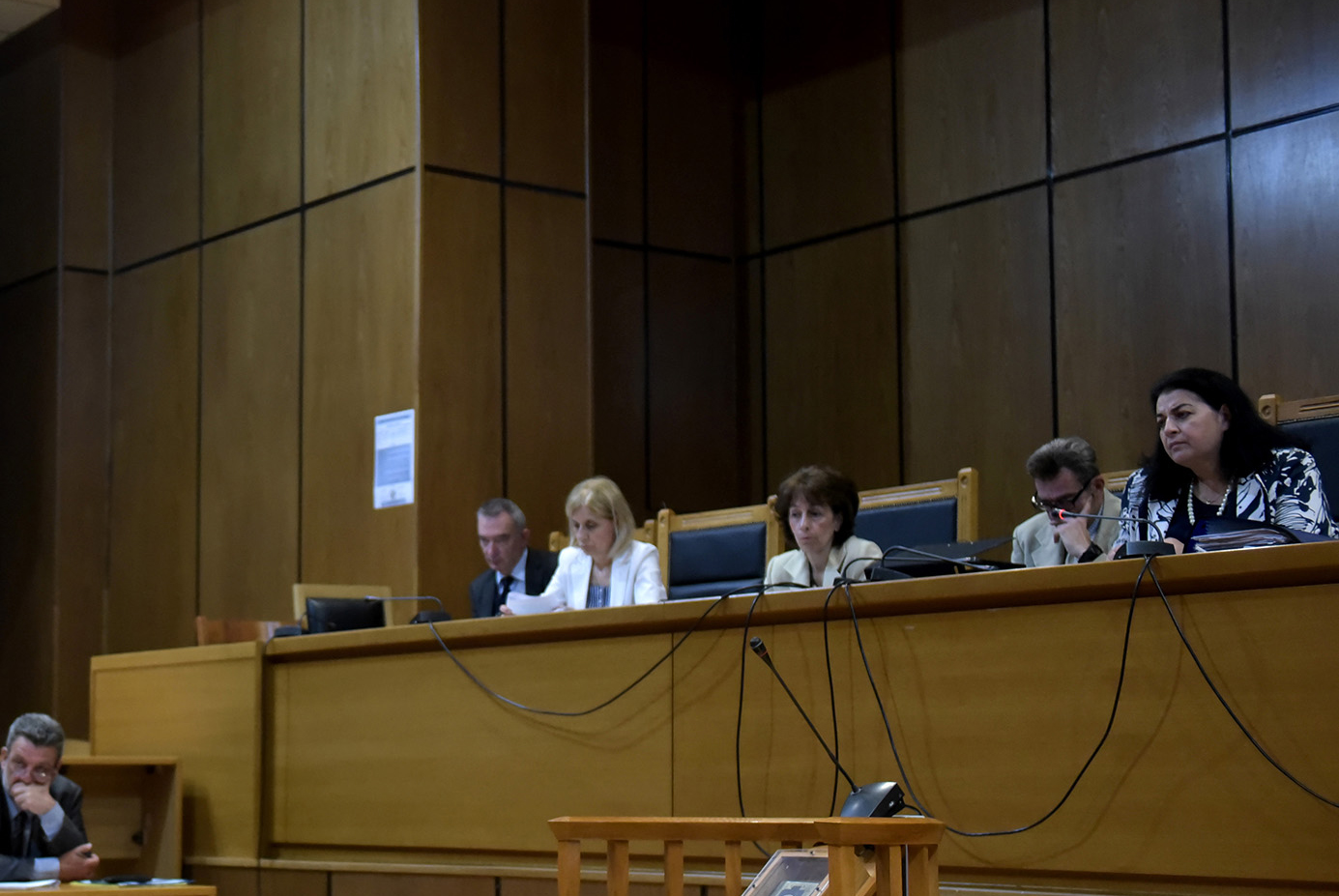 None of the defendants was present at the hearing. Defendant Boukouras arrived when witness A. Pnevmatikos started his testimony.

The witness is an employee of the municipality of Chalandri, where he resides. In the middle of February 2014, around 09:00, he was in the Chalandri mall when he saw a group of people approaching and chanting slogans. There were about 50-60 of them, men and women, most of them young, dressed in camo and black clothes. They were holding a rally, handing out pamphlets and shouting the slogan “Free the imprisoned comrades – fatherland – honor – Golden Dawn”.

The citizens at the spot came out of the shops to see what was happening. But, according to the witness, when they saw it was Golden Dawn they got afraid. He was not afraid, because he has both knowledge of, and opinion about, the political process. But when he felt the climate of fear that had been created, he got angry and felt it his duty to act. So, when the Golden Dawners where about 30 meters away from him, he shouted “Go away, out of Chalandri, back to your holes”. Ten of the aforementioned people ran towards him. They told him “Get out of here, you old faggot, because we’ll crush you”. The witness told them to leave. One of the aforementioned Golden Dawners punched him twice. Then his superior intervened (verbally) to force the witness to leave.

While the incident was unfolding the citizens in the surrounding shops didn’t dare approach and intervene. A woman shouted, “You madman, what do you think you’re doing, they’ll kill you”. His spouse started shouting, “Let go of my husband, ten to one, that’s they only way you can, you cowards”, and they told her, “Get lost”. The whole incident lasted about 10 minutes. The Golden Dawners, seeing that the witness and his spouse weren’t leaving and seeing that they were residents of the area and that people might start reacting, didn’t want to cause any more trouble.
The witness believes that if he hadn’t spoken up the Golden Dawners would not have bothered him. The witness didn’t know any of them. One of them said that he wasn’t from the northern suburbs, but from Kamatero. According to the witness, the Golden Dawners did not want to go beyond a certain level of violence, and that’s why their superior committed verbal instead of physical violence. All ten of the Golden Dawners participated in the incident against him, each in his own way. One of them told him “What do you want, to get disembowelled?” and made a gesture that showed it. However, their superior stopped him, because they only wanted to hand out their pamphlets.

While the incident was taking place, two policemen riding on motorcycles passed by, but did not stop to see what was the matter. The witness thought that their presence there wasn’t random, but they were checking on the Golden Dawners. The witness did not report the incident to the police or any other authority. However, he wrote a declaration, which he handed out to his colleagues and to the residents of Chalandri. SYRIZA also issued an announcement, which was published in the media and probably in the newspaper Avgi. According to the witness this must have been why the investigators called him to testify.

According to the witness, the people are afraid because they know what Golden Dawn is. They are also afraid because of the way that Golden Dawners present themselves in the street – in military formation. According to the witness, “a chain of violent incidents have connected Golden Dawn with stabbings and extreme violence towards the weak”. The connection of their ideology with violence has been proven, if we consider what nationalism-socialism stands for. When asked, the witness pointed out that some of the Golden Dawners photographed him with their mobile phones and told him “We’ll meet again”. This caused even more fear to the people that were watching what was happening.
According to the witness, the first target of Golden Dawn are those that are different. Its members –especially the rank and file– “are recruited in the darkest places of the society”. They also prefer to attack in the middle of the night, because they are paganists as well.

Ηe also explained that the members that participated in the incident weren’t from Chalandri or the surrounding areas, because Golden Dawn hasn’t been able to form a chapter there.

The witness was questioned in turn by defense counsels Kontovazenitis, Dimitrakopoulos, Zografos, Karydomatis, Oplantzakis, and Velentza. Among other things, he said that he told them to “go away” because he was incensed by their presence that resembled “like German soldiers marching in the streets”.

The witness has been taking part in municipal politics for many years and he is the mayor of Korinthos, both when the incidents took place and today. He met Boukouras only in 2012, when he was elected as a Golden Dawn MP. Until June 2012 they had no differences. In July 2012, Boukouras came along with Golden Dawn MPs Barbaroussis and Koukoutsis in the annual celebration about Dervenakia [:a decisive win against the Turkish forces during the Greek War of Independence] which is organized every year by the Municipality. With them came many members of Golden Dawn who were dressed in camo and black clothes. The Golden Dawners kept shouting slogans such as “Blood, Honor, Golden Dawn” throughout the celebration, causing problems.

The witness thought it was cowardice when they harassed New Democracy MP Tagaras, when he tried to lay a wreath at the bust of Kolokotronis. Tagaras didn’t react, and calmly came back. Then the witness publicly told Boukouras that he was a coward. Boukouras reacted by making a gesture that meant he would slay him. The incident is publicly available on the internet. Because he said what he said, the Golden Dawners had a bone to pick with him, even though he was a politician in the municipality and not an actor in the main political stage.

According to the witness, the Golden Dawners were a fully formed group, which obeyed the orders that Boukouras gave as the leader of the group. They were mainly people that Golden Dawn had bused in from elsewhere, since the witness didn’t recognize anyone as a citizen of Korinthos. Every year, the celebration is attended by 100-200 people. 2012 was the only year that so many people appeared and the incident took place. However, the presence of the police ensured that everyone left in a peaceful manner.

The witness then relayed another incident that involved him. Towards the end of July, beginning of August 2012, a fire broke out in the area of Examilia in Korinthos, where he went. During the putting out of the fire, appeared about 30 persons, dressed in a uniform manner. They approached him, led by Boukouras. The chief of the Fire Dept. and the chief of the Forestry Authority had gone off somewhere else and so the witness was alone. Boukouras asked him, “Why did you call me a coward?” The witness told him, “And what are you doing now, you come with 30 people to beat up the mayor?” Boukouras started taunting him, because he wanted to beat him up. He said that they should fight, just the two of them. The witness turned to leave saying that he didn’t want a fight, and it was then that Boukouras caught him by the belt with a military-style grip, tripped him up, and the mayor ended up on the ground with 30 thugs around him. Some residents of Examilia that were there to fight the fire approached and turned them away. The witness then called the police and the group of thirty left. When the police came they informed him that they were forced to arrest him, because Boukouras had pressed charges against him. The witness went to the police station in a patrol car to press charges, too.

The witness referred to the celebration in Chiliomodi, at the monument to Nikitaras. In 2012 or 2013 there had been an organized appearance of Golden Dawners there. When the mayor and other functionaries were laying wreaths, someone –most probably Boukouras– was giving the order to do an about turn, and the Golden Dawners obeyed.
Furthermore, the witness said that every Friday the Golden Dawners were holding rallies and shouting slogans such as “Blood, Honor, Golden Dawn”. They had also organized some activities, such as handing out food to the poor. The mayor did not object and gave the relevant permit to use the spaces they requested. The witness also referred to the incident where the Golden Dawners “had thrown some immigrants in the sea”. However, he was not present when the incident took place.

According to the witness, after the summer of 2012 not one incident worthy of note took place. And after the murder of Pavlos Fyssas, they stopped holding rallies as well and things returned to normal.
B. Examination of the witness by the civil action counsels

The witness was examined in turn by civil action counsels Kabagiannis, Skarmeas, Papadakis, Theodoropoulos, Vrettos, Antanasiotis, Malagaris, Stratis, Tzellis, Papadopoulou, and Tobatzoglou.
According to the witness, the groups of Golden Dawners that held the rallies caused fear and awe to everyone that saw them. Based on the incidents mentioned by the witness, he believes that Golden Dawn attacked politicians and immigrants.

The witness believes that the presence of 30 Golden Dawners in Chiliomodi was no accident and that this wasn’t a random incident, because it clearly demanded some sort of planning in advance. The witness said that he didn’t recognize most of those people, so he thinks that they weren’t residents of Korinthos, and that they had come from elsewhere.

The witness pointed out that later, after the murder of P. Fyssas, he saw in photos of those that had participated in the aforementioned incident in Dervenakia that Roupakias was there with them, dressed in camo and a black t-shirt.
The witness stated that by following –not very closely– the course traced by Boukouras, he sees that he has no connection to the man he was in 2012, that he has repented. He tries to be employed, he is politically active, and has founded a patriotic movement.

V. Statements by the defense counsels

Defense counsel P. Michalolias stated that if they are to examine witnesses such as Pisimisis, then no one should complain about the slow progress of this trial.
Defense counsel G. Michalolias stated that since the crimes that the defendants are accused of have all taken place prior to 2014, witness Pisimisis should not have been called to the stand.
Defense counsel Pantazi pointed out that that the charges that Boukouras and Pnevmatikos brought against each other have been archived, and that they never went to court.

The presiding judge adjourned for September 6th, 2017, at the Women’s Wing of the Korydallos Prison, when the testimony of witness A. Pnevmatikos is expected to continue with the examination by the defense counsels.