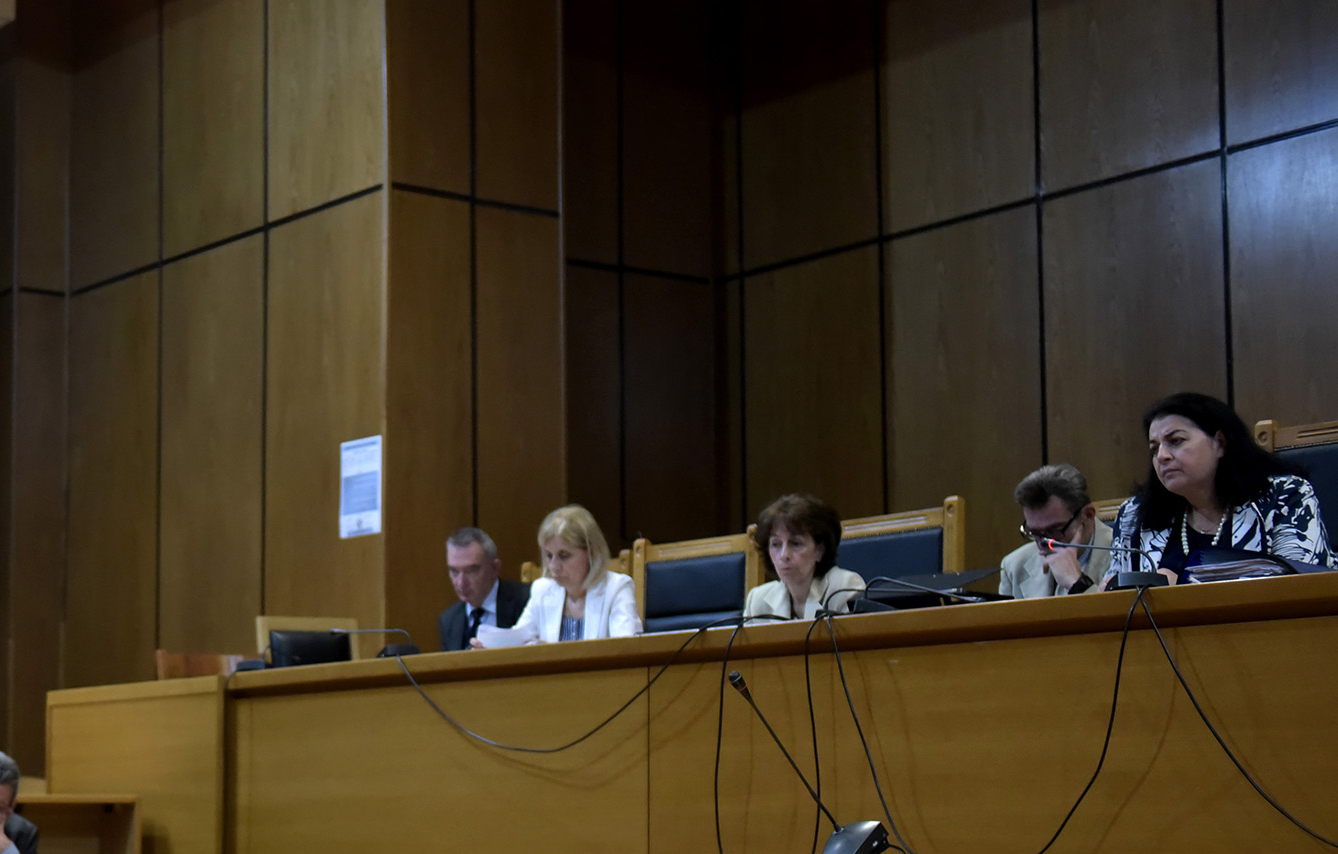 DAY 183: “GOLDEN DAWNERS DON’T ACT OF THEIR OWN ACCORD”

The courtroom remains open to the public upon presentation of a state ID card, which is retained by court authorities for the duration of the session. There were few members of the public in the courtroom and the usual number of police officers, both inside and outside of the courtroom.

The witness stated that the positions and structure of Golden Dawn are what make it a militia party. A party that, regardless of its positions, organizes its presence around violence. He also said that the rhetoric of Golden Dawn is accompanied and imposed by a military-type organization so that it can make use of violence. These organizations, whose model is the fascist state, engage in other activities as well, such as the right-wing party of Hungary.

The witness commented on the income sources of the party by saying that the party headquarters and newspaper are on their own very hefty costs for a party that (in 2012) didn’t yet have state funding, and had a relatively small number of members. Responding to questions by the defense counsels the witness repeated many times that he was called to the witness stand as a professor of political science and not as an eyewitness of incidents related to Golden Dawn. He pointed out that the rhetoric of Golden Dawn -contrary to other parties- is accompanied by a militia that enforces these positions for political gain. Responding to another question he said that a far-left party could never have a military-type structure. Furthermore, the witness said that protest for social issues is a core element of the democratic process, and that many times there can be tension, but here we are dealing with an organization that has presence, structure, and a specific rhetoric.

The witness stated that he is a journalist and he has been working for SKAI TV since 2007, dealing mainly with crime reporting. The witness mentioned an incident that took place in Agios Panteleimonas, where he went to perform his duties as a journalist. The “concerned citizens” of Agios Panteleimonas had organized a rally because a barber had been attacked and they were saying that the assailant was an immigrant. There was a gathering of residents of the area and candidates of Golden Dawn, while Skordeli and Gletsos [:a cousin of the mayor of Stylida] were protesting the presence of immigrants in the area. At the spot were other journalists as well who had no time to make interviews since almost immediately the gathered people started attacking and harassing immigrants, chasing them right there in the street and into the square, and they also started breaking the windows of immigrants’ houses who were living there, and that caused the reaction of the residents. The witness was assaulted when Skordeli stopped saying “don’t mind the snitches” [:the journalists].

According to the witness, anyone could have been in his position, since the crowd was worked up for violence. There was a massive police force which did nothing apart from keeping the necessary balance so that there wouldn’t be anything more serious. The witness recounted the events leading up to the attack: it happened when he took out his cellphone to photograph the rally for his own archive. Then he saw a group of 15-20 people that up to that time were standing with the “concerned citizens”, as he said, coming towards him; one of them hit him on the head, another stole his journalist ID and a third one started insulting him. The riot police unit did nothing, apart from one of them who came and pulled him away.

The men that attacked him had the usual Golden Dawn garb and body-type. The witness went to the Agios Panteleimonas police station and pressed charges, but no one ever informed him about the outcome of the case. The witness also said that the citizens’ “concern” was merely a cover in order to intimidate and harass immigrants. The witness stated that he is now afraid of reporting in Golden Dawn rallies and that many of his colleagues share this fear, and that some of them have even been attacked, like Giannis Kemmos [:another witness in this trial].
B. Examination by the civil action counsels

Responding to questions by the civil action counsels, the witness stated that the common trait shared by the murder of Fyssas and the attack on the PAME members is a brand violence towards everything different – whether it is immigrants or other groups. He also said that Golden Dawners never act of their own volition and there’s always a cause that drives them out to commit violent acts. He added that the murder of Fyssas is responsible for the sudden disappearance of the “concerned citizens” since many people were arrested after the murder. Concerning the stance of the police, the witness stated that in many cases the police showed indifference to what was happening, and said that Kasidiaris was virtually ordering the police around and there is a video of him saying to a police officer “Watch it or we could just trash the whole street” – a conviction of many of the witness’s colleagues, and not only of crime reporters at that.

Concerning the attack against immigrants the witness stated that there wasn’t a specific criterion, it was enough for someone to have a darker skin, and that groups like that are tolerated by the police since they know that even if the incidents are reported nothing will come of it. Finally, the witness said that the reportage clearly shows that the “concerned citizens” movement collapsed when the arrests started.

The witness stated that the persons that attacked him were in the group of the Golden Dawn MPs and that he became a target because he was cut off from his group. When asked if he knows whether parliamentary immunity is implicated, the witness said that Kasidiaris himself gave the answer in a video published by Efimerida ton Syntakton, in which he says that now that they have parliamentary immunity they can legally carry guns. Concerning what he thinks are the beliefs of Golden Dawn, the witness said that the answer to this question is the murder of Fyssas and of an immigrant in Koukaki.

Concerning the “concerned” citizens during 2010-2011, when he was covering the area of Agios Panteleimonas, he said they do not represent the residents of the area, and stated that there were really people that had become desperate with the situation, but they never resorted to violence. They were people that had been disappointed by the situation in the area. Responding to another question about the inaction of the police in these incidents, the witness noted that there are many other incidents where the police intervenes when crimes are committed, contrary to what happens where Golden Dawn is involved.

The witness ruled off the possibility that he was attacked for some other reason than him being a journalist. He went on to say that Skordeli was praising the attacks and the breaking of windows on the immigrants’ houses and that the people that assaulted him were also present in the Golden Dawn raids in the street fruit markets.

At this point the presiding judge adjourned for Thursday, September 28th, 2017, at 09:00, in the Women’s Wing of Korydallos Prison.