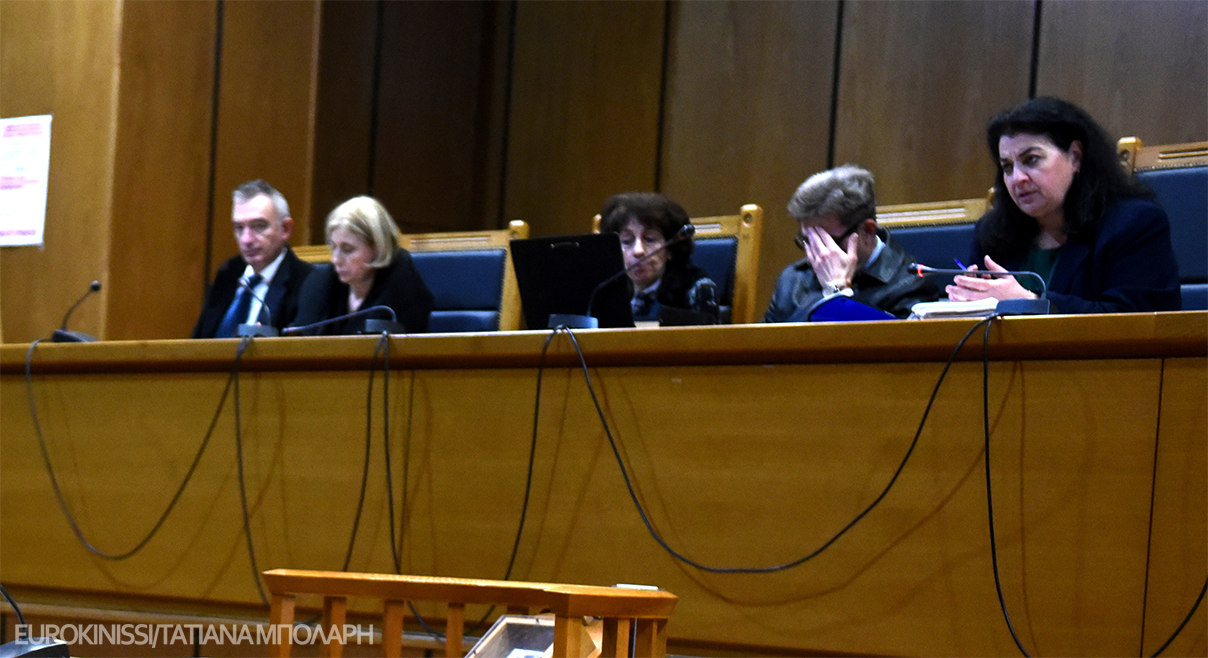 A. Motions by the civil action counsels

After the state prosecutor gave her opinion on a motion submitted by defense counsel Roussopoulos concerning the calling of the Perama Shipping Yards employers to the witness stand, which the state prosecutor moved to reject for this stage of the proceedings, the floor was given to the civil action counsels Tzellis, Tobatzoglou, Kabagiannis, Papadakis, Stratis, and Theodoropoulos.

In a similar vein, civil action counsel Tobatzoglou supported the calling of Nikolaou to the witness stand.
Civil action counsel Kabagiannis stated that the examination of the witnesses along with the material included in the documents is more than enough to reach a judicial decision (guilty, according to the civil action) and he believes that the witnesses have said enough as they stand. Concerning witness Polychronidou, she should be allowed to conclude her testimony, while concerning the case of “Antipnoia”, for which there are motions about the calling of policemen to the witness stand, the counsel said that there is already a final decision and the members of the court can ask to see it anytime they want. However, according to the counsel, there is no similar decision for the case of “Synergeio” and civil action counsel Zotos who couldn’t be in court today had motioned to call Psochios and Spiliotis. The former had spoken with Drimylis and noted down the license plate numbers of the motorbikes, which can be found as a linked document in his testimony and then we will find out which motorbikes took part in the assault. Spiliotis is the doctor who took the photos of the assault. Concerning the case of the Fyssas murder and because of the high number of persons that are involved in the attack, it is crucial to call and examine witness Nikolaou.

Concerning Papageorgiou and Chandrinos, the civil action counsel mentioned that there are former Golden Dawn members who have testified eponymously, and if the court needs more evidence for the activities of the criminal organization, then the witnesses are at their disposal.

Civil action counsel Papadakis stated that the court made the right decision to reserve its judgment on the various motions at this stage of the proceedings. Concerning the pending motions for calling Nikolaou and Chandrinou, the civil action counsel stated that the calling of Nikolaou to the witness stand is self-evident, and as for Chandrinos he said that the fact that he has been proposed as a witness for the defense should not keep the Court from calling him to testify, since his testimony will not be exhausted in the defense of a single defendant. Concerning witness Polychronidou, the civil action counsel stated that if her testimony is not completed then her partial testimony will be unusable due to judicial obstacles. Concerning the calling of the neighbors to testify, he stated that if the motion had been examined at the time it was submitted those people would have been found by now, because according to Tatsiopoulos 11 persons were named who went out on their balconies and witnessed the incident, and all this is included in the counsel’s motion submitted on October 20th, 2016. The Police can find them and they can be called to testify and the truth will finally be known.

Civil action counsel Stratis stated that in his opinion the court has enough evidence to convict without a shadow of a doubt, and further cross-examinations will add nothing more to the evidence load. Furthermore, he maintained that the examination of witness Nikolaou could be very useful because he was an eyewitness from a different, higher vantage point (his balcony) and could add more evidence to the Fyssas case. The same holds for the testimony of witness Chandrinos who is a former member of Golden Dawn and has said he has received threats. Spiliotis, who took pictures, and Papageorgiou, who was a member of the local chapter, and can shed some light on the ideology and the hierarchy of Golden Dawn, could also be called to the witness stand, if the court deems it useful.

Civil action counsel Theodoropoulos stated that the witness testimonies so far have produced enough evidence to uphold a judicial decision. However, should the court need clarifications, it can demand to investigate further certain aspects of the various cases. Furthermore, the counsel proceeded to clear up that a motion to cross-examine Chatzistamatis with Dimitratos has been attributed to him, although he hasn’t submitted it, and thus does not need to be judged by the Court, since, according to the counsel, the testimony of witness Chatzistamatis was unambiguous, decisive, and complete. The testimony of witness Nikolaou is crucial and may give the final piece of evidence needed by the court. Finally, it is necessary to let Polychronidou conclude her testimony.

B. Motions by the defense counsels

The floor was given to defense counsels Michalolias T., Kountouris, Roussopoulos, Oplantzakis, and Velentza, to support their motions.

Defense counsel Michalolias said that the defense believes that the court should decide whether the witnesses should be examined again. He also said that the defense could have motioned to call a multitude of witnesses, for example to testify about the matter of Baltakos etc. but they wanted to steer clear of the tactics used by the civil action which has called to the witness stand activists, theoreticians, and enemies of Golden Dawn. Furthermore, he stated that they won’t manage to divide the witnesses in categories based on their quality: bad police officers and good eyewitnesses. Concerning witness Chandrinos, he noted that if he won’t come to the witness stand as a defense witness as “the defense already fears”, it’s in the discretion of the court to call him. The defense believes that the court should choose its own evidentiary procedure so as to have a concrete opinion about what has taken place, and especially, according to the counsel, about the never formed criminal organization.

Defense counsel Kountouris supported the calling of Psochios to the witness stand so that his principal [Kalpitzis] will be cleared of participation in the relevant motorized rally.

Defense counsel Roussopoulos stated that former minister Dendias must be called to the witness stand because his principal [Lagos] is persecuted for his political views, and as he said this is the first time, since the founding of the Greek State, that a minister acts as an expert witness [he refers to the cameras and their operation].
Defense counsel Oplantzakis stated that one of the duties of the witnesses is to tell the truth. Concerning the cross-examination of witnesses, the defense counsel said that the law decrees that it is a useful tool when there are contradictory witness testimonies. His motion should then be accepted because the testimonies of Zorzos and Karagiannidou are contradictory.

Defense counsel Velentza has pointed, even during the preliminary stage –concerning her principal, Kazantzoglou– that a video from the corner shop shows that there was no one sitting next to the driver, that his fingerprints weren’t found in the car and that the witness testimonies do not mention him. According to the counsel, the motions are at the court’s disposal, however she must insist that Dendias will be called to the witness stand to explain what he was doing checking the cameras. Furthermore, she motioned to cross-examine him with witness Christidis, as well as with the owner of the Patistas shop.

C. The Court announces its decision on the motions

The presiding judge adjourned for February 6th, 2018, in the Women’s Wing of Korydallos Prison.