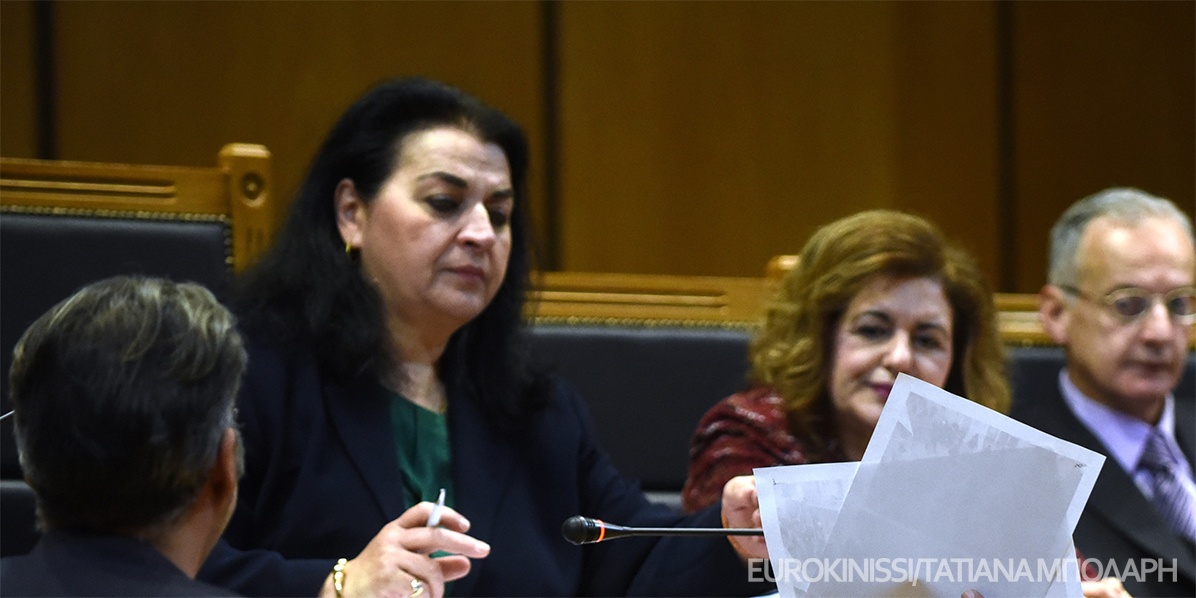 Day 220: “there are common practices, structure, organization, and discipline”

Civil action counsels Sapountzakis, Papadopoulou, and Papadakis remarked on the testimonies of the civil action witnesses.

Civil action counsel Sapountzakis first mentioned the testimony of MP Liana Kanelli concerning the activity of Golden Dawn, which always follows orders from above, and then continued to the testimony of MP Katsotis who spoke from experience and stressed that there was a coordinated effort in the Perama Shipping Yards to disrupt the activities of the Metalworkers’ Labor Union.

Concerning the testimony of Professor Margaritis, the civil action counsel stated that apart from being an eyewitness to an attack on immigrants in a bus, headed by Kasidiaris himself, the witness stated that, according to his scientific opinion, Golden Dawn is also destabilizing popular opinion as a handmaiden to the system. Lykoudis, the former vice-president of the Greek Parliament, testified about the behavior of Golden Dawn members both inside and outside the parliament, behavior which resembles a military unit, as well as the statements by Zaroulia who described immigrants as “subhumans”. Rigas, the former parliamentary representative for PASOK confirmed the testimony of the previous witness and also said that the attack on the PAME members recalls mafia practices and stressed that the attack had been announced in advance and this can be proven by the relevant videos. In conclusion, the counsel commented on the witness testimony of Stelios Benetatos, the former mayor of Nikaia, who spoke of military marches which caused fear and awe in the residents of Nikaia, while the older residents were reminded of the German Occupation Army during the Second World War.

Civil action counsel Papadopoulou took the floor and spoke about distinct similarities between the court decision that convicted Periandros and the testimony of Kousouris, concerning the practices of Golden Dawn, which remain essentially the same up to this day: Indoctrination to nationalism-socialism, methodology, an identical modus operandi, statement of political identity, isolation of the target, while in the Fyssas murder the wooden bats were upgraded to knives. The article “Nationalists or Nazis” illustrates best the doublespeak that Golden Dawn uses to signal to the initiated members that “we haven’t changed, all these years our leader is the same”.

Concerning the immigrants in the area of Agios Panteleimonas, the civil action counsel explained that the witness testimonies showed that Golden Dawn felt they had immunity to do what they wanted because the immigrants were powerless, and that the witnesses answered unanimously about the opinions of Golden Dawn regarding the immigrants: “Subhumans”, “cockroaches” and this is the aim of hate speech which is linked to the actions of assault squads. She expressed her concern wondering how is it possible that the leader and the prominent members are not involved, since they have said it themselves: “We’ll turn the Parliament into another Agios Panteleimonas”. The civil action counsel concluded by stressing that no one was ever kicked out, no one resigned from the leadership of Golden Dawn about the various actions and that this isn’t a condemnation but a full acceptance of the responsibility of Roupakias and the rest of the people that were there that night.

Civil action counsel Papadakis discussed the criteria that confirm the accusation of a criminal organization along with the doubts about the credibility of the witnesses: The 16 witnesses can be put into three categories: victims, residents, and MPs or representatives of institutions. They all referred to facts and attacks dating back to the ’90s. They said that there are common practices, structure, organization, and discipline. The counsel referred especially to the absence of the charge of instigation from the indictment. The defendants don’t need to prove that every crime has been ordered by the leader and at the same time the court is relieved of an obligation, proof of instigation is not necessary.

The civil action counsel went on to say that what is stable in all the attacks and has never been seen before is the recognizability, the criminal organization that everyone has confirmed, stressing that he doesn’t know if there was ever a court that possessed more evidence than the current one. From the testimony of professor Margaritis he singled out the ideology which recruits new members, which references nationalism while speaking against the system and the status quo but the only thing they do is murdering the victims of this system. He then went on to say that the witness testimonies showed that Golden Dawn enjoyed a sort of procedural immunity by the police, something which legitimized and increased their criminal activity. The civil action counsel concluded his remarks by saying that the court now has the full picture: the political party is a mask that covers the face of whoever held the club or the knife.

Defense counsel Dimitrakopoulos in his remarks claimed that the civil action witness testimonies didn’t add anything new to this trial. More specifically, Konstantinou didn’t even know if there was an indictment and if the case ever went anywhere and Pittas spoke about misdemeanors that have reached the period of limitation, not to mention that they were committed by persons that are not defendants in this trial. Christopoulos said that he doesn’t know who ordered the attack but that it was certainly ordered by someone, witness Diavolakis said nothing about case files or charges. Concerning witness Kanelli, the defense counsel said that she came here to continue her anti-Golden Dawn rhetoric, and he confessed that he was puzzled by the malicious –as he termed it– testimony of witness Rellas. Concerning the testimony of witness Rigas about the MPs who enter Parliament in ranks, he stated that he can’t understand in what way this constitutes a crime. He concluded by saying that the court heard a mass of fabricated arguments, but nothing to support the charge under article 187 CCP.

Concerning Mr Kousouris, defense counsel Tsagas said that we should be thankful that the convicted isn’t a defendant in this trial as an instigator. The counsel believes that witness Konstantinou wasn’t able to link the murder of Luqman to Golden Dawn, and about witnesses D. Christopoulos and E. Takou he said that they just repeated a modified version of the reports that will be read during the documents phase. Concerning the witnesses Pittas, Garganas, Diavolakis, and Thoidou, he said that they all spoke about damage to property and bodily harm that does not fall under 187 CCP and to perpetrators that are not defendants in the current trial, so their testimonies should not be taken into account. Concerning the testimonies of witnesses Kanelli and Katsotis about the Shipping Yards, trying to label their claims as contradictory, he couldn’t see the motive to drive out the union organizers at the same time that Golden Dawn had voted down the abolition of collective labor agreements. Remarking on the testimony of witness Kanellopoulou, he said that the only thing she had to say about the pogrom lead by Kasidiaris and Panagiotaros was that while she was going out some people verbally harassed her.

Defense Oplantzakis took the floor and started by referencing the great poet Kostis Palamas by saying that “if he lived today and wrote the Twelve Words of the Gypsy he would be sued because he didn’t name it the Twelve Words of the Roma!”. Concerning the 16 witnesses he said that they contributed nothing to the process. He said that Konstantinou is an activist who during an event at the Journalists’ Union of Athens Daily Newspapers said “Convict the fascists”, and his very presence insults the court, while professor Margaritis recommends his students to strive to be unlike Golden Dawn. Concerning all the witnesses, he said that they are driven by their malice and their ideology and they should have remained outside the courtroom.

Defense counsel Papadellis talked in general about a multitude of witnesses who are marked by a dearth of arguments, of facts, who harbor malice of the highest order, who are ideologically unbending and are driven by their obsessions, and who came to testify with a specific goal in mind: to harm people.

Defense counsel Roussopoulos claimed that all witnesses came to testify driven by malice, and started by saying that Ms. Takou has received funding for her union by George Soros’ Open Society Foundation. Concerning Mr. Margaritis, he said that he has written a book about the slaughter of the poor Cham Albanians by the murderous Greek Army, and concerning Ms. Kanelli he said that she came to this court to testify her political hatred, something which reminded him something a friend of his had said “We gather around our pool in the mansion and sing revolutionary songs”. Concerning the claim by witness Katsotis that Roupakias was a prominent member of the Nikaia chapter, he said that it is well known that he was the driver of [former PM] Samaras’ mother.

Defense counsel Zografos pointed out that it was pointless to comment on each witness testimony separately, since they didn’t offer anything new to the process, the witnesses answered the questions like automatons, they were like cassette players and especially witness Konstantinou puts on the face of the saddened maiden, goes on TV and says “hang the fascists”, and now he comes here and says that he respects this court. The counsel said of the witnesses that are university professors that they are characterized by infuriating ignorance.

Defense counsel Pantazi said in her remarks that the witness came to take political revenge, harboring their ideology since they were children, while those committed to their cause, which was how she labeled Konstantinou, Kousouris, and Kanellopoulou, didn’t even know the names of her principals. More specifically, she put into doubt the credibility of witness Konstantinou, since he has stated publicly that he demands the conviction of all defendants in this trial.

Defense counsel Alexiadis mentioned that the witnesses came to court to testify about their passion, so it’s understandable that they are moved by hatred and fanaticism and that they have nothing to say that even approaches common sense. He stated that apart from the conviction of their testimonies, they should also have the courage to face the consequences. He reminded the court of the defense’s efforts to refrain from the aggressive tactic of suing witnesses for perjury, since such tactics would not benefit his principal Ioannis Lagos.

Defense counsel Michalolias Giorgos said in his remarks that none of the witnesses had anything concrete to say about the division of duties or of a definite plan of action which was translated to specific events, they had no knowledge of the cases they were called to testify about based on the indictment, knew nothing of the charges, and the counsel said that this whole thing was a judicial provocation. He concluded his remarks by saying that the defendants were “bundled together” and stressed once more that this is a political trial.

The presiding judge adjourned for Friday, February 2nd, 2018, in the Court of Appeals.