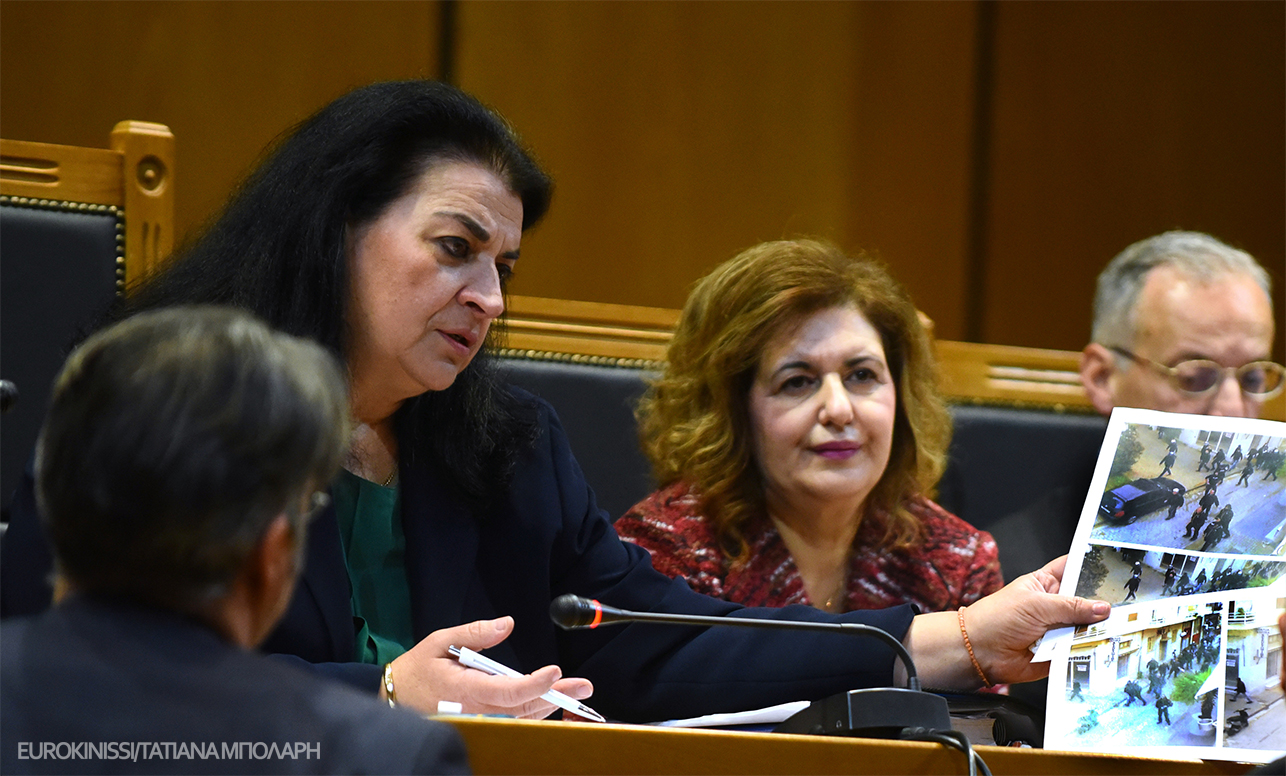 Day 218: “They made people afraid, recalling the German Occupation,

The hearing proceeded with the examination of the next (and last) witness for the civil action, Mr. Stelios Benetatos, former mayor of Nikaia.

The witness stated that he is a teacher and that in the past he has served as the mayor of Nikaia for eight years, up to 2010. From then up to now he has been a member of the municipal council of Nikaia. When the presiding judge asked him when did Golden Dawn opened the local chapter, the witness stated that the local chapter opened its doors in 2012, but the presence of Golden Dawn had been felt from the previous year. Their presence in that quarter, especially after the elections of 2012, the witness went on, had the appearance of assault squads, with military marches and orders which recalled the German Occupation.

The witness stressed that after the elections they were not content to just stand in ranks outside their offices, but started to ask of citizens that were going to the nearby IRS office to see their papers. This, added to their drills and marches that they made wearing uniform clothes, camo pants and black Golden Dawn shirts, made people afraid, recalling the German Occupation, as the witness said. The fear was heightened by the fact that the attack of Kasidiaris on MP Kanelli was approved by some people, something that inaugurated the attacks on immigrants. Concerning specific complaints made known to the municipal council, the witness discussed the document that the Golden Dawn MPs sent on October 2012 asking for a list of the names of immigrants’ children that had applied to be accepted to municipal kindergarten schools. The municipal council was unanimously opposed to giving away that information, since until then Michaloliakos had made the Nazi salute in public for the second time, and the council also decided to be vigilant given that the 28th October Commemoration was coming up.

He also talked about the incident in April 2011, when members of Golden Dawn marching in formation, invaded the General Hospital of Nikaia to hand out food to Greeks only, and were turned away by the doctors and nursing staff, as well as the incidents of planned intimidation of the immigrant shopkeepers in the Square of Ag. Nikolaos, breaking padlocks and making some of them close their shops. The activity of Golden Dawn members in the area included throwing immigrants out of buses, attacking them in the street or in their houses, harassment. The witness then mentioned the attack on the PAME members, carried out by an assault squad, an attack that the witness described as an “ambush”. This attack caused grievous bodily harm in some PAME members, who notified the municipal council of the incident and publicized it. Responding to a relevant question, the witness added that after the murder of Pavlos Fyssas, the incidents of violence in the area have decreased in number, but the Golden Dawners have not left, they are lurking, recently members of the Pakistani community complained to the municipal council of being attacked by persons they do not recognize.

B. Examination by the civil action counsels

Responding to a relevant question the witness stated that the attack on the PAME and KKE members had been surely planned in advance, and this is confirmed by the text messages that Lagos exchanged with Develekos –“we will slaughter them”– as well as by the aspirations of Golden Dawn to control the unions and decrease workers’ wages in the Perama Shipping Yards, serving in this way the interests of shipping moguls who support and fund the party’s activities. The plan to attack an organized movement, such as PAME or KKE, was surely known to Lagos, but also the Leader himself and this has been confirmed by the fact that their leader never condemned the attack, and it is also confirmed by the structure of the organization, which obeys Nazi standards.

The witness went on to say that their presence in a neighborhood of immigrants and workers such as Nikaia is merely symbolic and that it is the assault squad which is the core of the party of Golden Dawn. The witness went on to describe the common characteristics between attacks, such as the greater number of the attackers versus the victims, the cover of night, the extreme violence – all of which point to assault squads. Responding to a relevant question, the witness stated that the ideology of Golden Dawn is Nazism, and mentioned the relevant statement of Michaloliakos in an appearance in the talk show of Nikos Chatzinikolaou, as well as the references of leading Golden Dawn members to the SS hymn, and the description of immigrants as sub-humans. He repeated that the area was living in a climate of fear, to explain why even a Greek worker putting up posters would be afraid to lodge an official complaint of an attack against his person.

He added that during the election period Golden Dawn was speaking about suspending their operations and toning down their message, but then, from the time they opened their offices and until September 2013 and the murder of Fyssas, the attacks on immigrants became an even more frequent occurrence.

C. Examination by the defense counsels

When asked whether the demand for the names of immigrant children was submitted to the municipal council or as a question in Parliament, the witness stated that the important thing is that they aimed to bar immigrant children from going to kindergarten, something which promotes xenophobia, at a time when it was crucial to build more facilities so that no child is left out. He went on to clarify that the PAME is an association of unions and not a political party, and stated that in the Shipping Yards, apart from PAME, there is also the union of Agios Nikolaos, presided by Kyritsopoulos, who had asked to lower the wages, in effect calling for the application of the memorandums.

The witness also stated that Poulikogiannis had been made a target and that the fact that the assailants had stated they were members of Golden Dawn meant that they wanted to intimidate, to mark the territory as their own, to send a message that they are strong. He then said that such activities and the show of strength can lead to better election results in times of crisis and that’s what they had in mind, adding that “violence is their daily bread”. Concerning the incident in the Perama primary school, the witness was asked whether he was aware that Lagos had been called by a parent-teacher association, and the witness answered that there is a video that shows parents denying them entry.

When asked who are the members of the Golden Dawn union in the S/Y, the witness mentioned Kyritsopoulos as its president and then, when asked how does he know that the Agios Nikolaos union called for a lowering of the wages, he said that Kyritsopoulos has been captured on video saying that they will notify the shipping moguls that they will lower the wages, they will put an end to strikes, so that more ships will come to the S/Y. Concerning the attack on Poulikogiannis, the witness said that he can’t say anything about a financial gain, only about political gain, but in any case the political gains are connected to financial gains by the employers [in the S/Y].

At this point the presiding judge adjourned, due to fact that the State Prosecutor felt unwell, for January 26th, 2018, at the Court of Appeals.