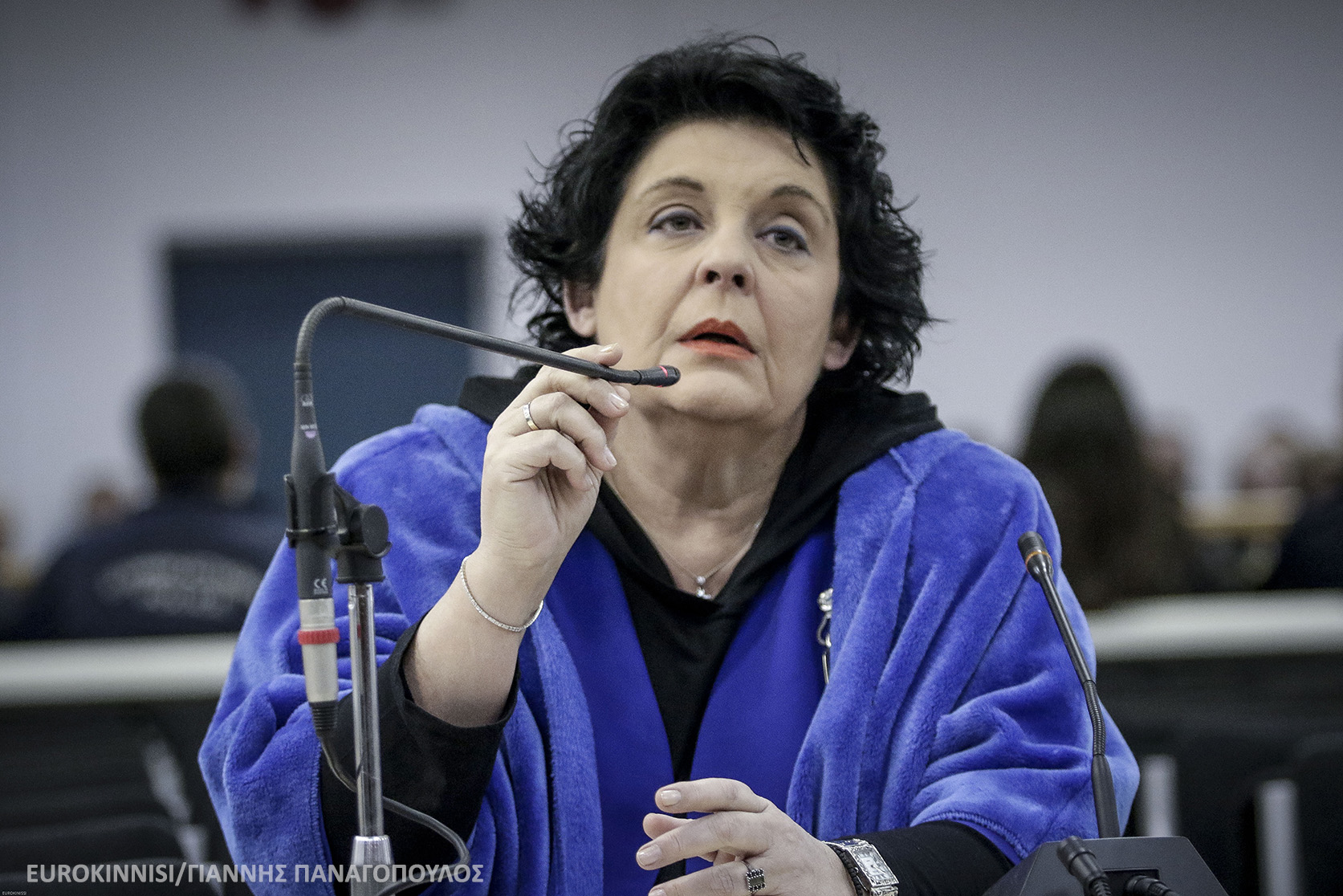 DAY 213: “Even in Parliament they confirm that they operate as a criminal organization and not as a party.”

The witness noted that she has some information because of her position (she has been an MP for the KKE since 2000, even though she is not a member) and because of her occupation – she is a journalist. Concerning the attack of the Golden Dawners on the PAME members she learned “some savage details”. The group was attacked because they were communists and the Golden Dawners wanted to dissuade people from joining the labor unions. According to the witness “the Golden Dawners had stated many times that they were going to control Perama”, and through Michos, Panagiotaros, and Lagos they had stated that they would control the Shipping Yards. According to the witness “they conduct their attacks loudly and clearly, they will state who they are, they will use anticommunist rhetoric, ‘commies we’ll get you’. If you are a fascist, then by definition you hate communists. Fascists cannot exist without communists. Or else they turn against antifascists such as Fyssas. The witness went on to talk briefly about the murder of P. Fyssas and the checks of the “guys in black” in the street markets of Agrinio.

The witness stated that Zaroulia had called immigrants “subhuman” in the Greek Parliament – this is a Golden Dawn position inside and outside the Parliament. Furthermore, she said that “the people that side with the Capital could never have found a better representative” from Golden Dawn, since the MPs of Golden Dawn have made 100-150 questions in Parliament providing a voice for the shipping capital, the S/Y bosses, blackmailing temporary workers’ daily wages etc. The Golden Dawners act as if they wear a uniform and submit to the will of the Leader, “they aren’t hooligans, they aren’t a mob, they are an organized mob”. Furthermore, according to the witness, “Golden Dawn is structured in such as a way as to make it impossible to act without an order by the leader. When they attacked me, Kasidiaris was the favorite of the leader, his protegé. The leader is like a God.”

The witness believes, based on logical thought, that the attacks by Golden Dawn have been decided in advance by Michaloliakos. As she noted, “when the leader says ‘we’ll hunt them down’, Kasidiaris comes to the studio and attacks me. […] It’s not the first time. Those that harbor the same ideology have done it in other countries as well. You have to crush your opponents, to humiliate them, to show manliness, violence, with much swagger, so that they know what to expect in Parliament.” The witness added that “they did not expect me to react to the humiliation of fellow MP Ms. Dourou, despite the fact that she is a member of a different party”. The Golden Dawners said “she was carrying” because she had the newspaper Rizospastis in her hands. According to Michaloliakos, she is a “combative bolshevic” and Kasidiaris did well to attack her, since Golden Dawn’s poll ratings were raised by 2% afterwards. As she said, she has been bullied online by the 4,000 congratulatory notes that Kasidiaris received after he attacked her.
When asked whether the Golden Dawners espouse violence, the witness responded “that goes without question, you can’t be a Nazi -even though they deny it- and not fight the communists. With violence. They accept it wholeheartedly. And they win votes. And they intimidate, which was their goal all along, to strike fear in people’s hearts. That’s why they go out formed in assault squads, because they want to terrorize. I have experienced the same tactics in Parliament.”

She was in a parliamentary committee and Lagos approached to hit her and if two people who were there hadn’t intervened the witness can’t say how things would have ended for her. Furthermore, on the day that the two Golden Dawners were murdered in N. Irakleio [in 2013], Michos named her as an instigator of the murders. Despite the fact that a group assumed responsibility, she was the one that was sued and now faces trial.

The witness stated that the farthest the leadership of Golden Dawn has gone to condemn the attacks were of the kind “I don’t know him, I haven’t seen him” and that “the leader must above all be left untouched, because how will the others continue? The fascist’s sacrifice is nothing compared to saving Hitler, isn’t that so?” According to the witness, Michaloliakos assumed the political responsibility for the murder of Fyssas because he was in a position that to do otherwise “he would have undermined his own leadership […]. People had started to speak up, he had to keep his grip and to take up responsibility. […] One of the characteristics of fascism is cowardice, the bunkers they will run to in order to hide.”

Among other things, the witness stated that “Golden Dawn is both criminal and an organization. They take violent advantage of parliamentary procedures. They take advantage. Even in Parliament they confirm that they operate as a criminal organization and not as a party.” The witness stated that she did not press charges against Kasidiaris, but she dealt with the matter through political means. So he should not be convicted or cleared of this particular action.

Responding to relevant questions, the witness stated that of course she has never interviewed Michaloliakos, “so that he can say to her that he will have her killed tomorrow. He is not unknown to her. For her he represents anticommunism, violence, and ugliness.” Furthermore, and after the witness was first asked about her preliminary testimony, defense counsel Michalolias G. commented that she is a “fellow fan of the state prosecutor. They support the same football team.” – to which the presiding judge strongly objected.

Among other things, the witness stated that PAME guards its own rallies and that she doesn’t think that breaking a lock or hanging a banner from the Acropolis hill is vandalism. She also said -and this caused tensions to rise between the witness and the defense counsels- that they have no right to compare such actions with the disemboweling of Fyssas and the beating of Poulikogiannis. As for the role of PAME in the S/Y, the witness told the defense counsels that they should read Rizospastis. She did explain, though, that compared to the years before the financial crisis, wages today are lower than in 2009, but they are much higher that what they would be if there was no union activity.
Responding to a relevant question, the witness stated that “what I said in Parliament, ‘from Perama to Keratsini not one fascist will remain’ I said it on the day after the murder of Fyssas. And it was followed by ‘the people got you in Parliament and the people will kick you out’. It’s an international, traditional slogan: ‘Crush the fascists in every quarter’.” She noted that there is no law to prevent its use and that the Dean of the University of Crete has been cleared for its use.

The witness is a MP for KKE, a member of the administration of GSEE and knew well the union members in the Shipping Yards of Perama.

After the attack of the Golden Dawners on the PAME members, he went to the Thriassio hospital to visit the victims [:Poulikogiannis, Zymaris, etc.]. Poulikogiannis and Diamantakis were in bad shape, and according to the witness “the goal of the attack was murder”. The attack had been announced by Lagos when he visited the S/Y when he said that “the KKE lackeys” will be stamped out, that Golden Dawn will call the shots. During the attack, the Golden Dawners stated their identity – which in any case was evident from the clothes they wore. They did it to show that they are driving out “the lackeys” of PAME, as they had announced. The decision had not been taken by Pantazis, but by the leadership of Golden Dawn, Michaloliakos that is – something that has been proved by the text messages that Lagos exchanged with him during the attack.

According to the witness, Golden Dawn is the enemy of the workers, it wants them subdued. The Golden Dawners told anyone who was interested that they would get them jobs, and they did it by acting to lower the basic wage from 751 euros to 586 euros. As for the assuming of the political responsibility for the murder of P. Fyssas “the political responsibility is nothing, in short [Michaloliakos] did it to keep the votes in his pocket”.

At this point the presiding judge adjourned for January 12th, 2018, in the Women’s Wing of Korydallos Prison, where the trial will continue with the examination of the PAME members civil action witnesses [:Kanellopoulos and Rigas, the examination of Katsotis, by the defense counsels, will conclude on January 17th, 2018].