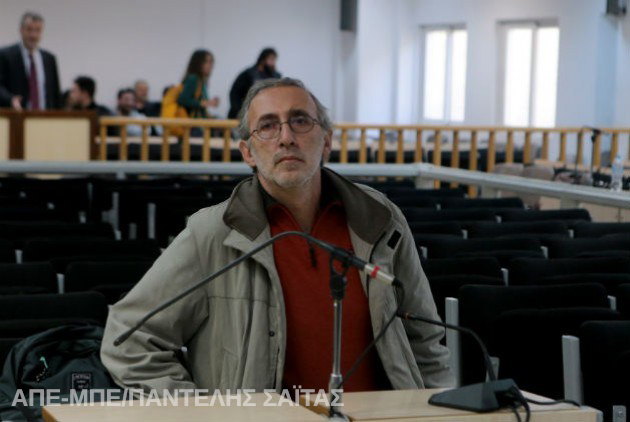 Day 210: “The crucial difference between Golden Dawn and other parties is that it has a mechanism in place”

The courtroom remains open to the public upon presentation of a state ID card, which is retained by court authorities for the duration of the session. There were some members of the public but few journalists in the courtroom.

The hearing commenced with the conclusion of the examination of witness Petros Konstantinou, a coordinator of KEERFA [Movement United Against Racism and the Fascist Threat] and a member of the municipal council of Athens for ANTARSYA, and continued with the testimony of Eleni Takou, a former coordinator with the Racist Violence Recording Network (RVRN).

The witness was examined in turn by civil action counsels Skarmeas, Papadopoulou, Vrettos, and Theodoropoulos.

Konstantinou stated that the people that were convicted for the murder of Luqman were connected to Golden Dawn, since police found in their houses G.D. Pamphlets, baseball bats, and five knives. He stressed that the attacks shared many common characteristics, such as the ambush, the targets of the attacks, who were immigrants and union people, and added that in many of them there was a prominent member of Golden Dawn involved, for example in Agios Panteleimonas it was Skordeli or Panagiotaros. Responding to a relevant question the witness said that the party leadership never condemned these attacks. Quite the contrary, Skordeli was put on the Golden Dawn ballot in the 2012 elections, and recently, after the attack on civil action counsel Kouniaki, Skordeli wrote on Facebook “Well done lads”, speaking to the perpetrators of the assault. The witness claimed that there was a steep increase in the number of the attacks during 2012-2013, because Golden Dawn used the power it gained from entering Parliament in order to expand its operations in other areas such as Nikaia and Menidi. He also said that Skordeli was a member of the Committee of the concerned citizens of Agios Panteleimonas. Concerning the phraseology of Golden Dawn he said that it’s difficult to find another party leader that has called the President of the Republic a “cleaning woman”. He stressed that the crucial difference between Golden Dawn and other parties is that it has a mechanism in place, the assault squads, so when they say “no to Islamization”, they can send a group to burn down the mosque.

B. Examination by the defense counsels

Konstantinou said that KEERFA, which was formed in 2009 has often pointed out incidents to ministers and stands against all manner of racist violence. Speaking about the pogrom that followed the murder of Kandaris, he said that there was a large Golden Dawn group, which came from Agios Panteleimonas, who were wielding big clubs and beat up any immigrants they came across, and no arrests were made, no one was prosecuted for this case, the police did nothing, despite the duration of the attack, which the witness indicated as a major failure.

When asked about the Luqman murder, the witness said that there are no spontaneous racist attacks, especially at three in the morning, unless the perpetrators have connections like this, speaking about Golden Dawn, which at the time was systematically cultivating hatred towards immigrants. A striking example that proves the above were the statements by Michaloliakos saying that there aren’t any immigrants, only illegal immigrants, and he called them subhumans. He said that the victim did not appear in the press conference about the attack on the Egyptian fishermen, because he couldn’t make it. The witness called the food charities of Golden Dawn “racist hate charities” since they promote solidarity only among Greeks, and they promote hate against immigrants.

The witness stated that she is a political scientist and that in the past she has served as a coordinator of the RVRN, from 2012 until January 2015. The RVRN was founded in the summer of 2011 when racist violence incidents were spiking, and was supported by the National Commission for Human Rights and the United Nations High Commissioner for Refugees. As coordinator, the witness was accepting recordings from 18 civil society organizations, which had offices all over the country, but mostly in Athens. The State Ombudsman and the Immigrant Integration Council participated in the RVRN.

Concerning the input forms, the witness stated that they were filled by the various organizations’ recorders, without mentioning the victims’ personal information, which were overwhelmingly immigrants. The conclusions drawn was that there was a specific modus operandi, people who had their faces covered, who carried similar weapons and wore similar clothes, and most of the times they checked the papers of the immigrants right before the attack. Many recorded attacks have been prosecuted and some perpetrators have been convicted. There were some recordings in 2011, there were 154 attacks in 2012, and 166 in 2013. Especially for 2013, 65% of recordings were made in the months before the murder of Fyssas. She mentioned a few cases which were prosecuted to convictions, such as the stabbing of an Afghan man in 2011, which saw the conviction of Skordeli among others, the murder of Luqman, and the arson of the establishment of an immigrant from Cameroon in Patisia.

The modus operandi shows that these were organized attacks which fit the m.o. of the Golden Dawn assault squads. The victims were all immigrants, and noted that after the murder of Fyssas in 2013 there were only 18 incidents with a different modus operandi than the previous ones. She said that the attack against the Egyptian fishermen was one of the cases recorded by the RVRN, and specifically by a recorder of Amnesty International on July 26th, 2012, and was included in the 2012 report due to the severity of the attack and its modus operandi.

Responding to a relevant question the witness stated that, as in other cases, the attack against the Egyptian fishermen was carried out by young men wearing black clothes, were carrying weapons, and targeted their victims based on their nationality. Stating her personal opinion, the witness stated that the attacks weren’t random and that the order came from above, since the target was the victim’s nationality and not the victim himself.

C. Examination by the defense counsels

Responding to a relevant question, Takou stated that she was only accepting input forms, and the only incident she recorded herself was the murder of Luqman. She also appeared at the murder trial because of the racist motives involved. She also stated that the RVRN’s 2012 annual report makes mention of these groups’ links to Golden Dawn. Responding to a relevant question, the witness stated that about 20 cases were prosecuted and pointed out that our country has been condemned by the European Court of Human Rights for the matter of racist violence incidents. She finished by saying that from the 2013 cases, 15 victims identified as perpetrators persons that are connected to Golden Dawn.