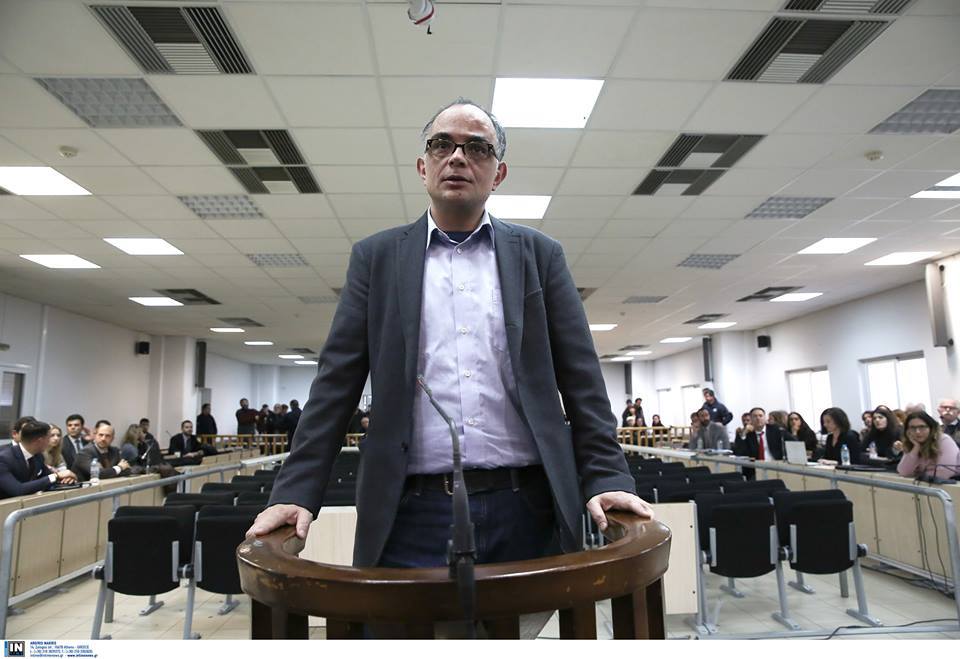 Day 208: The witness came, swear an oath but didn’t testify

The courtroom remains open to the public upon presentation of a state ID card, which is retained by court authorities for the duration of the session, until all audience seats in the courtroom are filled. There was increased attendance by both members of the public and the press because of the testimony of the first witness of the civil action, Dimitris Kousouris.

ΙΙΙ. Conclusion of the statements concerning the protected witness testimonies by the defense counsels under article 358 CCP

Defense counsel Michalolias G. took the floor to continue his statements following the recess of the previous hearing, on the 7th of December. The defense motioned to expel the next witness, Dimitris Kousouris, the first witness of the civil action, from the courtroom during the statements. The presiding judge ruled that Mr. Kousouris did not have to leave the courtroom during the statements.

Defense counsel Michalolias G. continued his statements concerning the testimony of protected witness C. He pointed out that the incident described by C concerning the video of Pavlos Fyssas that Roupakias watched in Nikaia before the murder, in order to target Fyssas, is false, since, according to the defense counsel, when Roupakias was asked if he knew Fyssas by sight, he replied that he didn’t. Concerning witness D, defense counsel Michalolias G. pointed out that he discerned a few irregularities in his testimony and that the court should investigate the circumstances under which the witness went to testify. The defense counsel pointed out that the testimony of witness D had no connection to the truth, and commented on the various parts which, according to the counsel, confirm his point. As for the incident with the Pakistanis in the port, according to the counsel, nothing proves that there was a crime under article 187 CCP, since nowhere was it shown that this occurrence was the result of an order, an organization, or training.

Concerning protected witness E, defense counsel Michalolias G. pointed out that we should separate the incidents that the witness knew first hand and those that he heard from others, and noted, according to him, the contradictions in the witness’s testimony. He also stressed that the book and the material that the witness claims she has given to the investigators, has not been found in the case files, something which creates new questions concerning the process. Furthermore, he said that the witness’s involvement with Golden Dawn was unclear, since, she was notified in 2005 that there was a standing order to “break her legs”, but still she remained in Golden Dawn from 2008 to 2010, and the threat has yet to be realized. Defense counsel Michalolias G. stated that Kasidiaris’ brother has said that he was away from Athens on the day that the witness claimed to have seen him, and wondered why would he come to Athens just for one night in order to threat the witness, when she had given no indication that she was going to testify.

As for the events in the Old Appeals Court, the defense counsel commented that the incidents do not point towards a crime under article 187 CCP. Furthermore, he added that the incidents that the woman put forth in order to be put under the witness protection program are nothing more than fictions based on movies and that the fact that the witness gave an interview to a magazine points to a ridiculing of the process, since she is the one that claims she is afraid.

Defense counsel Pantazi stated that the testimony of witness D proves that her principal is innocent of all charges. There is also the problem of how witness D was placed in the witness protection program without first meeting with any officer of the state prosecutor’s office. She stated that the witness was trained by journalists and testified under his own name. The defense counsel went on to say that the testimony that put her principal into custody described the events as if they had been witnessed firsthand, but during his hearing testimony the witness stated that he had heard these from others. Moreover, the defense counsel went on, witness D did not describe a specific modus operandi during the incident at Korinthos, and noted that in this incident there aren’t even the rudiments of a simple crime, let alone a crime under article 187 CCP. She also said that the witness’s written testimony contained questions that include things that the witness still hasn’t said.

Defense counsel Oplantzakis claimed that the witnesses went overboard by taking advantage of the protection granted to them by the State. He wondered how is it possible that if witnesses C and E went to testify of their own free will and this is not mentioned in their testimony reports, as put forth by article 213, par. 3 CCP concerning the summoning of witnesses. This lead him to the conclusion that this isn’t some oversight of the state prosecutor officers, but that the witnesses are lying when they say that they went to testify of their own free will. As for witness B, the defense counsel wondered about her being kicked out of Golden Dawn and the emotional response that lead to her testimony in this court.

Defense counsel Velentza added that the protected witnesses do not fulfill the conditions of the relevant article 9 of 29298/2001, since they themselves offered up personal information, such as addresses and places of origin. None of the witnesses, according to the counsel, has described a real event, and none described activities that fall under article 187 CCP. As for witness C, the defense counsel remarked that he is lying, since during his preliminary testimony he never once mentioned her principal and concluded her remarks by saying that the witnesses had been trained in advance and brought nothing of substance to the process.

Defense counsel Gavelas wondered how these witnesses came to be included in the witness protection program, and also whether they have taken advantage of privileged treatment, given that some of them have confessed their involvement in crimes. The defense counsel asked the court how the witnesses knew where to go and testify and how they knew that they would be put in the witness protection program. He then motioned to prosecute witness A for perjury since his replies to questions by the bench and the defense concerning prior convictions were contradictory. Based on these contradictory testimonies, the defense counsel concludes that the witness is unreliable. Concerning witness C, defense counsel believes that he should receive psychiatric care and then went on to characterize the witness with the words “the big one”, “the mentally ill”, “the disappointed” etc. and ended by saying that some of them should have come to court in their real capacity, as defendants, not as witnesses.

Defense counsel Bairaktaris stated that the protected witnesses’ testimonies have been concluded, but are not complete, because the court couldn’t reach a safe evaluation. He wondered whether the motives for the witness testimonies were grounded in personal differences, in disappointment or fear, because normally they would have to be defendants in this trial. According to the defense counsel there is no reason not to prosecute them. Concerning witness B, the defense counsel said that his attempt to link Golden Dawn with the police was false.

During the comments on the testimony of witness C, the defense counsel stated that he isn’t interested in how the witnesses were pointed to the state prosecutor’s office, but whether they were provided with directions as to where their testimonies should point to. He voiced once more his reservations concerning the questions during the preliminary testimonies and pointed out that nowhere was it said that the witness was showed photographs, nor that the testimony was interrupted, because of the witness’s confusion, as he said himself during his hearing testimony. The defense counsel also pointed out that the witness stated that he owned an expandable baton and that he caused grievous bodily injury. In conclusion, the defense counsel asked to put under consideration the comments on article 358 in conjunction with articles 141 and 38 CCP, in order to investigate crimes committed by the protected witnesses. The members of the court reserved their judgment.

Defense counsel Roussopoulos made a short statement, touching on a few points put forth by his colleagues in the defense.

After a short recess, defense counsel Mammis revisited the matter of perjury by the protected witnesses and their admission that they had participated in criminal activities, stating that they were never prosecuted and no case file was formed against them because what they testified was impossible to evaluate. Concerning the testimonies of witnesses A and occasionally C, the defense counsel pointed out that the battle training ground in the Malakasa military facility that the witnesses mentioned would be impossible to remain unnoticed by passersby, by the commander of the facility, by the prison guards of the nearby prison facility, given the geographical position of the military facility.

IV. The court calls witness Kousouris to the stand and subsequent objections by the defense

The state prosecutor stated that these matters have already been solved and explained that the civil action witnesses can testify for any other matter and that their objections concerning the examination of witness about crimes under 187 CCP are unacceptable. The witnesses can not be examined by the civil action as regards this particular matter.
Civil action: Civil action counsel Kabagiannis stated that the summons were legal. He reminded that the court must decide whether the witnesses will be examined and for which part of the crime, since leading a criminal organization is different from participating in a criminal organization.

Civil action counsel Vrettos mentioned that the questions that were posed on June 21st, 2015 by the members of the court defined the spectrum of the attendance and examination by the civil action and moreover that the court has judged that the examination of the witnesses on all matters pertaining to a criminal organization is one of the prerequisites of a fair trial, according to the European Convention on Human Rights.

Civil action counsel Theodoropoulos stated that it is perfectly legal to examine civil action witnesses that have to do with perpetrators for whom the court has allowed the counsels to act as the civil action.

Defense: Defense counsel Michalolias G. insisted that they can’t testify on defendants that are not present, a statement which was confirmed by defense counsels Alevras, Alexiadis, and Velentza. The presiding judge asked if the defense would like to add anything else, and defense counsel Michalolias G., talking especially about witness Kousouris, asked if this witness would have something to add on the matter of the incident concerning the Egyptian fishermen, and if yes, what, from Austria? [Witness Kousouris is a permanent resident of Austria].
The members of the court overruled the objections by reasoning that, one, they accept the participation of the civil action for the defendants as perpetrators of specific crimes, and as regards the charge of criminal organization, the court accepts the participation of civil action and witnesses in order to investigate whether the defendants are members of a criminal organization.

The presiding judge called witness Dimitris Kousouris to the witness stand, and he took the oath, something that marks the beginning of his examination, without any other objections and interventions, to be continued on Friday, December 15th, in the Women’s Wing of Korydallos Prison.