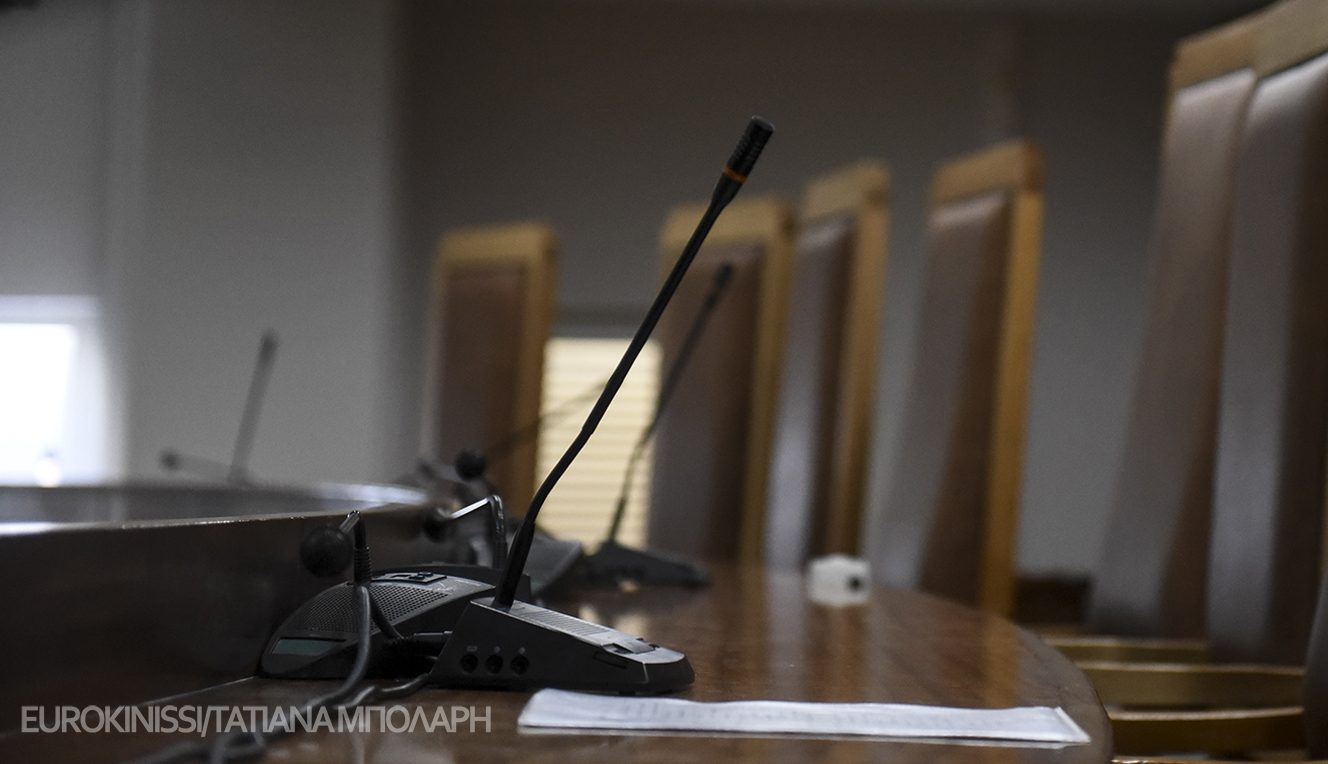 The officer of the court and the officer of the state prosecutor’s office confirmed that in the room are just them and protected witness E, that the door is closed, that the witness has no documents in front of him. [Note: The witness stated of her own free will at the beginning of her testimony that she is a woman, and so she will henceforth be mentioned as a woman].

In March of 2005, Kasidiaris told the witness that Vouldis was going to put her in the cells. She went of her own free will because she didn’t think much of it, since at the time her view of Golden Dawn was not what it is today. The witness stated that, despite the fact that she was very low in the organization’s hierarchy, she was a friend of Kasidiaris and that’s why they were communicating without other members getting in the way. Kasidiaris was one of the leaders of the cells, he gave ideological lessons to the cells. She was also his friend, because she was a friend of G. Vouldis, who was her connection with all these people. Kasidiaris called her on the phone to go to “battle”. However, the fact that she was a friend to these higher-ups did not change the fact that she held a low rank in the hierarchy.
According to the witness, Vouldis was the right-hand man of Michaloliakos. They were very friendly to each other. If someone talked with him [:Vouldis], it was the same as speaking to the Leader. He was well-respected and a person of importance within Golden Dawn, but she doesn’t know what is his administrative role. The witness stated that the hierarchy and the political structure of Golden Dawn were two different things, at least at the time she was in the party, and she doesn’t know if the same still holds true. According to the witness, Vouldis wasn’t the second in command, because “There was no second in command. If you got too near the Leader your head was cut off, which is what happened to Zafeiropoulos and Periandros”. She had seen Vouldis’ membership card, which was the kind given to leading members of Golden Dawn, had the registration number 20 or 21, bore the Nazi wreath and the SS eagle, and was emblazoned with the meander and the words “Popular Association Golden Dawn”. In her preliminary testimony the witness had testified that rumors say that the registration numbers of these membership cards start from the number 17 for symbolic reasons.

According to the witness, Vouldis had told her in 2004 that Golden Dawn will not participate in elections, because if they are to enter parliament, they will do it with tanks. The witness, when she was active in Golden Dawn, had done two tattoos: a swastika and a totenkopf [:the insignia of a special Waffen-SS unit]. At the time she thought they were part of who she was. She hadn’t been forced to do them, but the general sentiment enabled it. She has had them removed.

According to the witness, the ideology of Golden Dawn as regards women harks back to “the standards of ’36: she is a good nationalist-socialist if she stays in the house and has children, because her goal is to breed warriors”. The witness stated that in 2008, the central offices of Golden Dawn had about 15 women members, who were either active or went only on Saturdays or accompanied their Golden Dawner partner or husband. She was adamant that there are no transgender people in Golden Dawn.

The witness explained that any deviation from the orders given by their superiors resulted in behavior that was demeaning to the person, and gave the following example “when someone had a question, for example why does the Golden Dawn magazine runs articles about the Second World War but does not busy itself with current issues. The person that posed the question was immediately mocked, and later was beaten up. She explained that she had been called to attend rallies such as the one in the Old Appeals Court or in Agios Panteleimonas, because “people like me, without a family, plagued by depression, searching for something to hold on to, a group where they can belong, are capable of anything. People like us, like me, are expendable, and can easily become heroes”.

The witness stated that some of the incidents in her testimony have been changed somewhat, in order to protect her identity. Responding to a relevant question, she described once more the incident at the Old Appeals Court, the immigrants’ rally in Villa Amalias, and others. The witness described an incident in the offices of her lawyer E. Tsagarakou, who had left Golden Dawn for reasons that had to do with the hierarchy. It was then that she had the suspicion that her office was the meeting place of an assault squad of Golden Dawn (one of many, according to the witness) made up of people who “were true to their Nazi ideology”.

When questioned about how she was forced to go on the Golden Dawn European Parliament ballot, the witness stated that Michaloliakos himself had called her from an unknown number to ask her to meet him in his office. It was there, with Vouldis, Kasidiaris, Germenis and his son, and Panagiotaros all present, that she was accused of running an anti-Golden Dawn blog. She was asked to prove that she wasn’t the moderator of such a blog. She proved it but they wouldn’t listen. A few days later, she was sitting in the same table with some of them in Panagiotaros’ shop, when they convinced her to sign the papers needed to put her on the ballot. The witness pointed out that there were other women that had joined Golden Dawn –the wives and daughters of Golden Dawn members– who had been “mobilized” and were also on the Golden Dawn ballots, in order to get the necessary percentage of women.
After 2006, the witness started distancing herself from Golden Dawn, when she passed by the offices she was jeered, they made her clean the bathroom in front of other people, or wash the flags. Speaking of the standing order against her, that any Golden Dawner who sees her must break her legs, the witness said that she heard of it in 2008, when a younger Golden Dawner spoke about it with Vouldis, who went to Michaloliakos to talk to him about it and then told her that it would be prudent to let the storm blow over. The witness talked about a few people who had left Golden Dawn, such as D. Zafeiropoulos and a few others in her cell. She explained that Golden Dawn insisted on keeping her in the ranks not for any personal reason, but because that was the modus operandi: “The leader believes that whoever isn’t with them is against them”.

The witness managed to get away completely in 2010, she moved from her home in a dire state (both financially and psychologically), and stayed for a time in the center of Exarcheia [:the anarchist quarter of Athens, were Golden Dawners won’t go]. In 2013, ten days after the murder of P. Fyssas, the witness saw by chance, around 6 am, in Syntagma Square, a low-level Golden Dawner, and was very afraid because it showed that they had found the area in which she moved. A few days later, around the same time, she was going from Kolonaki to the Syntagma Square Everest, when she saw A. Kasidiaris drive by. He stopped, called her, and beckoned her to approach. The witness ran away in terror. Since she got in the witness protection program she has not been bothered and isn’t afraid anymore. The witness explained that she had been afraid to go to the police, because Golden Dawn is on good terms with many police officers, but after the murder of P. Fyssas the conditions changed and she thought that she could trust the police.

[Note: The witness was called to testify about an incident described by protected witness A, when he was named as the driver of Kasidiaris]

The witness is a bus driver for the city transport and has been assigned to the headquarters of Golden Dawn. As he said, he works in the reception office, three days a week for 6 hours every day. He has never worked as a driver the whole time he has been there. The witness stated that he has never driven Kasidiaris anywhere. He was adamant that he has never driven him during the night in remote places to meet with MPs or cell leaders. He stated that there are 10 people working the reception desk, and two of them are drivers, like himself. Another driver works in the canteen. The witness stated that he is on good terms with the members of Golden Dawn.

The witness was questioned by civil action counsel Kabagiannis.
The witness stated that he is a supporter of Golden Dawn, not a member. He doesn’t have a supporter card, because such a card does not exist. He was a candidate for the Athens municipal council in a few municipal elections. The witness was shown –in order to ascertain its credibility– a document that the witness confirmed that he has signed. In this document the witness states for the investigators, that Golden Dawn is a political party, and asks that should any members be indicted, to also indict him under article 187 CCP.