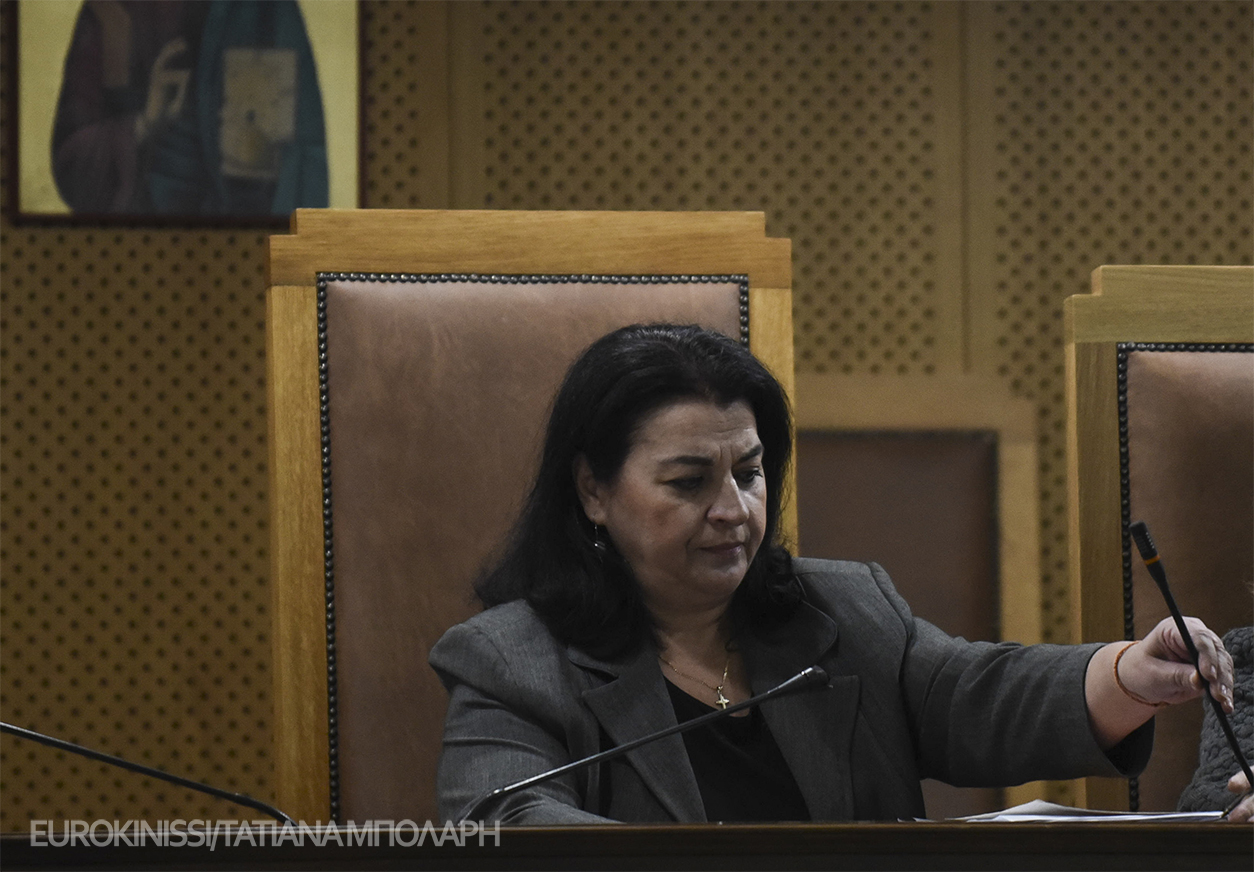 The officer of the court and the officer of the state prosecutor’s office confirmed that in the room are just them and protected witness E, that the door is closed, that the witness has no documents in front of him. [Note: The witness stated of her own free will at the beginning of her testimony that she is a woman, and so she will henceforth be mentioned as a woman].

The witness went to Golden Dawn for the first time in March 2004. She visited the Golden Dawn headquarters, which at the time were in Solomou Street, in Exarcheia. She was urged by G. Vouldis and the reason she went there was to socialize. After the autumn of 2004 she went to the offices every Saturday. She wasn’t a member yet, and so she didn’t have access to every part of the headquarters. She kept to the kitchen and the lounge. The friend who had urged her to visit Golden Dawn provided her with election campaign material, so she would start forming some kind of ideological basis.

After the autumn of 2004, the Golden Dawners started seeing her as a “Golden Dawn member-in-waiting” and their behavior towards her changed. They started saluting and addressing her in a military fashion and she started doing the same. During an event about Pavlos Melas, Panagiotaros told her “well done”, and that she would make “a good comrade-in-arms”. She went through the cells training and finished in 2005, having proven her loyalty to Golden Dawn. The cells training lasted a few months and consisted of learning the history of Golden Dawn, of the Nazi movement, the values of nationalism-socialism in Ancient Greek thought, the values of the Greek race. The witness attended indoctrination lessons, but not physical training. The indoctrination lessons were given by N. Konstantinou, G. Misiakas, D. Zafeiropoulos, G. Georgakakis, and Ilias Kasidiaris, who were all members from way back, and who had the tools to ideologically prepare the trainees. To this end they gave them Mein Kampf by Hitler, books by Michaloliakos, magazines, the newspaper of Golden Dawn, which back then came out twice a month, as well as the newspaper “Eleftheros Kosmos” which at the time was controlled by Golden Dawn. Having gone through the cells training, the witness was now considered a probationary member. They provided her with a membership card embossed with the meander logo, her full name, her registration number, and the letter “Δ” [P] – for Probationary, the lowest rank in the Golden Dawn hierarchy.

The witness went on to become a full member, however this wasn’t marked by any official ceremony to mark the change in status. As they told her “based on the duties that you are assigned with and your loyalty to Golden Dawn, you accept the honor accorded to you by your inferiors”. The witness was mainly sitting in the office reception area and made lists of names of the people that came to join the organization [:people that were unknown to the organization] and the books they bought. She then reported back to Kasidiaris.

From what she heard from conversations between higher-ups that were conducted in her presence, she knew that there were other kinds of training, like night hikes in the mountains surrounding Athens, which included indoctrination lessons, climbing, knife skills, “butchering lessons”, and lessons on how to incapacitate the enemy. These were organized by Kasidiaris, Vouldis, and Germenis. The witness didn’t get to attend because she was a woman, and as they explained to her, the ideology of nationalism-socialism would not allow it. She overheard a telephone call by Michos, where he gave the aforementioned answer. She was also present when Michos cancelled a “butchering lesson”, which taught Golden Dawn members how to use knives to sever arteries etc. Michos himself had offered to sell her a small handgun – “ladylike” as he told her, and she could have the bullets for free. The witness had seen the Golden Dawners showing off their handguns and cleaning them along with their ammo clips. As she said, it was clear that “all the leading members carried guns”, and made special mention to Kasidiaris, Vouldis, and Zafeiropoulos.

The witness’s ideological indoctrination went on up to the Imia anniversary of 2006. Around that time she left Athens for work-related reasons and didn’t attend the lessons anymore. During her time away from Athens they checked up on her by phone, to ask her if she had bought the latest issue of the newspaper and whether she had changed her views. When the witness came back to Athens, the headquarters of Golden Dawn had moved to Sokratous Street. The previous offices had been torched [by anarchists]. The offices were now frequented by more people, who were also more worked up. Golden Dawn had started opening up to the public. They went all the time to hand out pamphlets or cause a fight. For example, a photographer covering the Imia anniversary was assaulted by Golden Dawners who wanted to get his camera. Those that didn’t agree with Golden Dawn’s opinions, be it Greeks or immigrants, were beaten up. These things happened even when the witness first went to Golden Dawn, but they intensified after 2006. At the time that Agios Panteleimonas started making headlines, the Golden Dawners had started “officially drawing knives”.

The witness had attended a few supposedly quiet events who had broken into chaos. For example, in 2010 in the Old Appeals Court (Hotel Ambassadeur). She had been called along with three “concerned citizens” who lived around Omonoia Square. She had never seen them before. They met in the square and started handing out pamphlets. About 100-150 Golden Dawners had gathered in the square. According to the witness “the passers-by that protested or took photographs were beaten up”. Kasidiaris was going around the cafés and made everyone who had taken photos to delete them. Then, according to the witness “there were clashes in the Old Appeals Court with the immigrants. There were clashes, walls and trees were torn down. There was so much rage. They were kicking them. We were all there, Panagiotaros, Vouldis, Georgakakis, Michos, Lagos. […] Zervas, Mikelatos, and a few others went up on the roof of the apartment block on our side of the street and shot some pellets. It was a battle”. In incidents like this one Michaloliakos was usually present at the start and then “made himself scarce”.

The leader had a standing order to beat up any immigrant, and the higher-ups applauded it whenever it happened. According to the witness “Kasidiaris said that this was the order from above. The leader himself wouldn’t tell me such a thing directly, I was too low in the hierarchy”. The witness mentioned an incident involving a girl in a train station who had an antifascist tattoo. Some Golden Dawners noticed it and broke her arms. She heard of the incident both from the perpetrators and from the victim. She also mentioned an incident involving someone who hadn’t “trodden the line” and had been beaten up in the offices, playing classic music from the speakers to cover his screams.

The witness was forced to attend Golden Dawn events. She stopped going regularly to the Golden Dawn headquarters in 2006. She kept inventing various work-related excuses, to Alexandra Barou, who had been assigned as her supervisor and was pressing her hard, in order to stay away from Golden Dawn events. For Golden Dawn it was vital that the witness be kept in the ranks, they checked to see if her behavior was in accordance with nationalist-socialist values, and they also kept tabs on the people she was going around with. She had also been forced to go on the Golden Dawn European parliament ballot, so that they would have a token female candidate.

The witness went on to describe another incident, in 2010, when Golden Dawn had decided to hold a counter-protest to a gathering in Villa Amalias [:a famous anarchist squat in Athens that is no longer in operation] in support of immigrants. Kasidiaris had called her “to head to battle”. He made her supervise a teenage Golden Dawner and a slightly older one and gave all three of them wooden bats and helmets, before assigning them to guard a particular street. Kasidiaris left with an escort of a few motorcycles, and the witness then realized that the anarchist gathering had drawn a crowd of 5,000 people.The witness then understood that this was a way to “get back at her”, because she had fallen in disgrace (because she no longer attended Golden Dawn events). As she said, “It’s very easy to become a hero for Golden Dawn”. She decided to disappear, “if I stayed with them I’d die, if I left I’d get beaten”.

She finally managed to get away in 2010, when she moved from the house she owned to a part of the city not frequented by Golden Dawners. After the murder of P. Fyssas the witness started seeing Golden Dawners in places they normally wouldn’t go. They started calling her on the telephone. According to the witness “this happened because no one can just leave Golden Dawn like this”, and “when they leave, an order goes out against them, usually to beat them up. This is a standing order. Anyone in the rank and file knows that when they see me they have to break my legs. I know this because I heard Kasidiaris in Thermopylae saying the same thing for someone else”. The witness believes that she is still in danger because the order against her hasn’t been revoked.

When asked why do people join Golden Dawn, the witness said that “it’s very easy to get on the path of hatred. It’s because of depression etc. It’s easy to turn against your fellow man, to blame the color of his skin”. The witness said that Golden Dawn is a criminal organization, according to the penal code, and they espouse a nationalist-socialist ideology to boot.

The witness stated that she went to the investigators to testify because she was afraid. She explained that “the decision was hers and hers alone, she had a moral duty to testify against Golden Dawn”. A few days before her testimony, after the murder of Pavlos Fyssas, she understood that the Golden Dawners had located her. Especially when she saw Kasidiaris’ brother in a car outside her house.

The presiding judge adjourned earlier than planned (due to the participation of the court secretary in the ADEDY strike) for December 6th, 2017, at the Women’s Wing of the Korydallos Prison, when the testimony of protected witness E is expected to continue with the examination by the defense counsels.