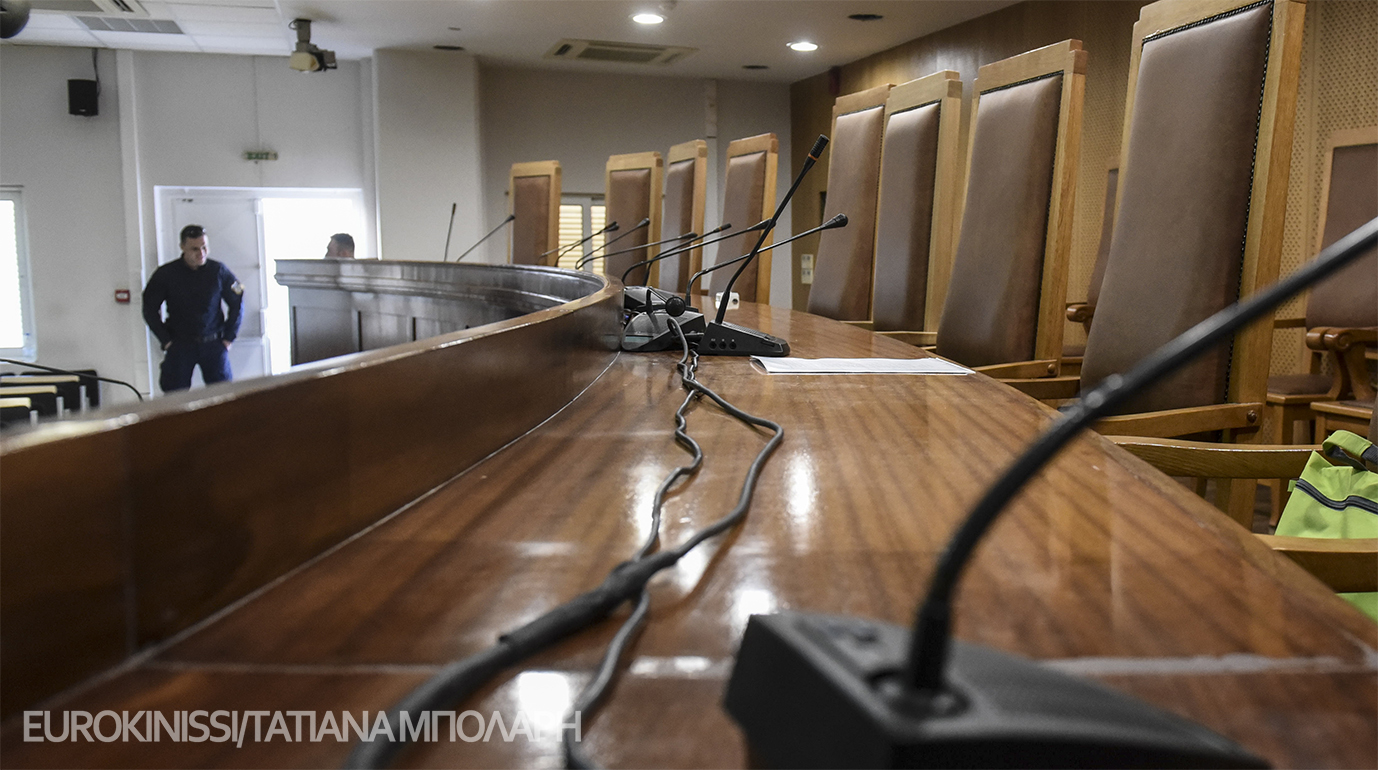 Day 202: The were inventing stories where Pakistanis attacked Greeks

The courtroom remains open to the public upon presentation of a state ID card, which is retained by court authorities for the duration of the session. There were few spectators and members of the press in the courtroom.

The hearing started with the conclusion of the examination of witness C by the defense counsels, and the start of the examination of the next protected witness, codenamed “D”. A. Kosma, the officer of the Athens state prosecutor’s office, and Xanth. Nounelli, the officer of the court, confirmed that the witness was present in the special examination room set aside for the protected witnesses, that there was no other person in the room with him, and that the witness had nothing on the desk in front of him, apart from a Bible.

The witness was next examined by defense counsels Bairaktaris, Palevratzis, and Alexiadis. The witness stated that he was a guard at the Nikaia local chapter for about a year, along with Roupakias, Tsakanikas, and Marios. He said that he didn’t testify everything that he knew about Golden Dawn [during the preliminary testimony] because he was afraid that he would be identified. Witness C also said that while he was still in Golden Dawn he always carried with him an expandable baton and a BB gun. He occasionally bought knives, which he always threw away afterwards because he considered them incriminating evidence. He said that he made few friends in Golden Dawn, among them Roupakias and Tsakanikas. He described the council that was convened before the murder of Fyssas in a corner café that is on the same street as the Golden Dawn chapter. It was during this conversation, which he attended in full, that Fyssas was made a target.

Responding to a relevant question the witness described the attack that took place in Agios Nikolaos Square, when they broke into an old house and assaulted the immigrants that were living there. He said that it was him who started spraying with the fire extinguisher in order to make the air inside unbearable, and then he took out his expandable baton. In the house he saw 3-5 persons, dark-skinned, and said that “We called them yahabibi, Pakistanis all looked the same to us”.

Finally, before taking his leave the witness told the court that the investigators had informed him that the court will judge whether he will receive a reduced sentence or no sentence at all.

It should be noted that the defense once more motioned to arrest the witness for perjury. The members of the court overruled the motion, and reserved their judgment about sending the trial records to the competent state prosecutor after the trial has run its course. The court overruled a motion by defense counsel Roussopoulos to identify the witness in a few photos that were shown by Michalolias G. in a previous hearing. Finally, defense counsel Michalolias G. motioned to bring to the attention of the court the witness’s medical file from Evaggelismos Hospital, since it could be necessary to put into effect article 210 CCP, if it was proved the witness in question was hospitalized with bipolar disorder in 2011, and with loss of consciousness in 2013. The court reserved its judgment.

Responding to questions by the members of the court, protected witness D answered that already in 2011 they were gathering in some houses in Korinthos, before they opened the Nemea local chapter in the beginning of 2012. Boukouras had called for frequent meetings in 2011 as they were preparing for the election campaign. The meetings drew about 50 people, who were talking about the state the country has been reduced to, and then the election campaign commenced, where Boukouras had a constant presence. They did 3-4 speeches per week in the greater Korinthos area, and from February 2012 the speeches became almost a daily occurrence. However, according to the witness, when Golden Dawn entered parliament, Boukouras changed course and started ordering everyone around, he swore and picked fights with all sorts of people, chief among them mayors Andrianakos and Pnevmatikos. This was the reason why the witness stopped supporting Boukouras in June 2012.

Responding to a question by the presiding judge, the witness stated that Boukouras worked the Golden Dawn supporters to a frenzy by saying for example “If the state won’t do it, then we will make their lives a living hell”, and also by inventing stories where Pakistanis attacked Greeks, which resulted in some people attacking a few Pakistanis they passed in the street, as they later recounted in the offices of the local chapter.

The witness also stated that he had participated in the incident where they threw they Pakistanis into the sea, where Boukouras was present. Responding to another question he said that the Nemea chapter opened its doors at the end of 2011, and had quite a good turnout, but many people quit because of the behavior of Boukouras. The local chapter held speeches and sold books about Golden Dawn, t-shirts etc. The cell leader was Pan. Manavis, the person responsible for security was Vassilis Lazaris, and Konstantinos Tzas had been assigned various general duties. The speakers were most often Boukouras, Kasidiaris, Panagiotaros, and Michaloliakos during the election campaign. The witness stated that the local chapter stocked books not only by Kasidiaris and Michaloliakos, but also by Hitler.

The witness analyzed the military-style hierarchy he described in his preliminary testimony and said that when they handed out pamphlets they were all wearing identical black clothes emblazoned with the Golden Dawn logo, which were sold in the local chapter, and they went to Korinthos walking in formation. He also said that he had heard from Mantzoros and Tzas about a training that had taken place in the mountains of Korinthos twice, near the dam of Lake Doxa, however he had not attended. Boukouras was the trainer along with one other person that he brought from Athens. This training took place after Boukouras was elected to parliament, when the witness had left the ranks of Golden Dawn.

He described in more detail the only attack he had taken part in, sometime between the end of 2011 and the beginning of 2012, when 30-40 people started from Perivolakia Korinthou to hand out leaflets, after an order given by Boukouras. Boukouras led them to hand out leaflets, and they walked in ranks. Near the port they saw four Pakistanis, and some people shouted “Let’s go, get them!”, they chased them down and threw them into the water. When the Pakistanis fell into the water, a DIAS police unit arrived, but didn’t do anything. The incident was widely discussed in the local community but no charges were brought against anyone. No one condemned this action inside Golden Dawn, least of all the leadership.

The witness left Golden Dawn after the election of May 2012 because of the change in the behavior of Boukouras, who started ordering people around and insulted the local community, something which contributed to the decline of the Nemea local chapter until only 3-4 people were left, and so the chapter closed down. The witness started disparaging Golden Dawn and was threatened about a week after he left the organization by a man who told him “If you go on talking like this, Lagos will come down and break your bones”.

Concerning the weaponry in the Nemea office, the witness said that Boukouras had a handgun, although he couldn’t say if Boukouras had a permit, and two of the guys that were going around with Boukouras all the time had been arrested for carrying concealed firearms. They had bats and knives, and said that the Greek flags they carried were camouflaged bats. The witness stated that they had talked about stashing weapons in a convent in the mountains of Korinthos because, as Boukouras said “Times are tough, we should stock up on weapons and food”.

Responding to another question he said that Tzas was Boukouras’ right hand man, and that he knows that 2-3 of his thugs, Tzas among them, had gone to take protection money from a grape factory in Kiato. Moreover, Tzas had appeared in the media, because he employed immigrant workers whom he didn’t pay and then he went with a few other people from Golden Dawn and beat them up.

The witness claimed that Boukouras knew what the leader of every cell did in his office and that he had the full approval of Michaloliakos for everything he did. The witness also stated that he went to the Golden Dawn headquarters in Athens, where they gave him a membership card.

Responding to questions by the state prosecutor, the witness said that he didn’t pass any training in order to become a member of Golden Dawn, and he also said that Boukouras was present during the incident against the Pakistanis in the port, but he didn’t hear him give any order. He stated that the relations between the police and Golden Dawn were very good and, judging by the port incident, the police was covering up for them.

Responding to a question by the assistant state prosecutor, he said that initially Golden Dawn talked about nationalism, referring to Papadopoulos, but gradually they started talking about Nazism, something that was evident from the books that were sold in the offices.

B. Examination by the defense counsels

Protected witness D was then examined by defense counsel Pantazis. Responding to relevant questions the witness stated that after the murder of Fyssas he thought it was his duty to let everyone know what was going on in Golden Dawn, after what Roupakias did. He first called the police station in Korinthos, before he went there and told them what had happened, whereupon two officers accompanied him to Evelpidon. They waited there for many hours until an investigator was available to talk with him. Responding to another question the witness stated that he is a resident of Athens, but his family comes from Nemea, and before the elections of 2012 he went to Korinthos 2-3 times a week, and attended meetings with Boukouras.

The presiding judge adjourned for November 27th, 2017, in the Women’s Wing of Korydallos Prison.