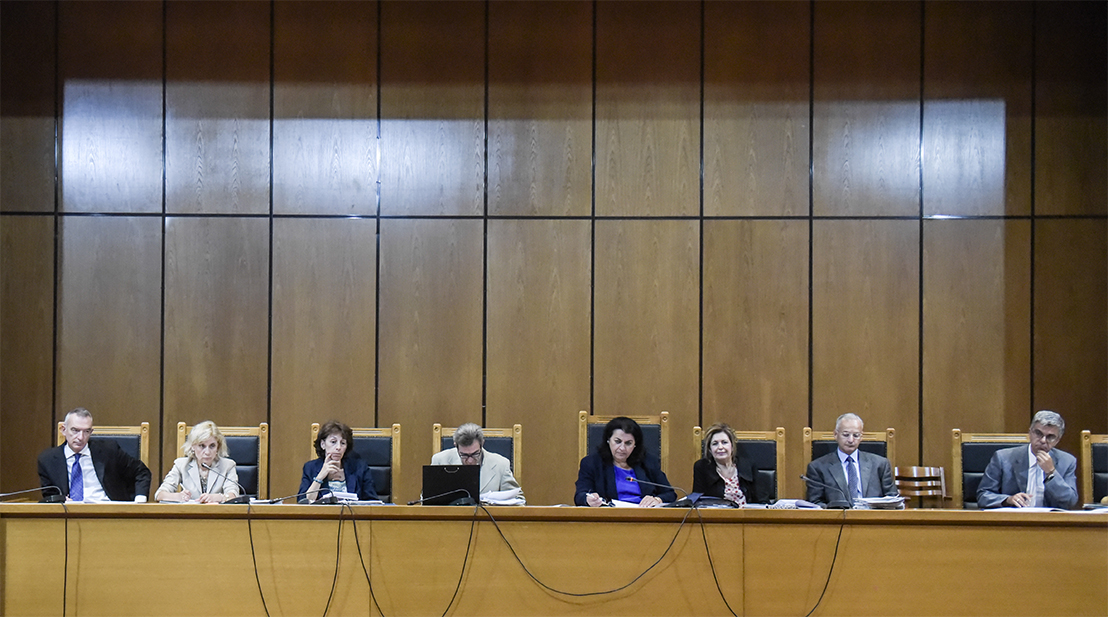 DAY 189: Civil Action wants examination of the 5 protected witnesses to be carried out, eponymously, in court

III. Comments on the witness testimonies under article 358 CCP continue

Defense counsel Dimitrakopoulos commented that police officer Georgakopoulos was objective when he said that [Golden Dawner] F. Bellos was acting of his own volition. Georgousis was called to the witness stand bringing nothing but a documentary showing some people “making jokes”. Kaminis testified that Golden Dawn is a Nazi organization because of its structure and coordination, but it is a fact that the Municipality of Athens shares the same traits. Katrivanou came to the witness stand with a subjective ideological view of things. Kourkoulas did not speak about matters of substance, such as the events at Imia and the Old Appeals Court. Kouveli had nothing to testify about any crime. Baskakis said that the term “assault squad” is a creation of the media. Bamis testified that he left the scene of the incident in Meligalas alone, without a police escort, from a place that in his own admission there wasn’t an assault squad. Moros testified that he was suffering from depression. Stavrou testified that he was never called upon to participate in criminal activities and that there were never assault squads.

According to the defense counsel, he had “issues”, being very insecure, and left his position in Parliament with the approval of his Party. Spourdalakis never clarified the type of investigation he has carried out. As for the testimony of Tezaris, it’s normal for anyone to deny to be photographed, because then he becomes a possible target. Yfantis described in thriller terms a police check on Golden Dawn. Tsimboukakis didn’t even know who was implicated in the incident he witnessed, and later they arbitrarily attributed it to Golden Dawn. Christopoulos didn’t testify anything that can be useful to a court of law. As for Psarras, he said that his statement of October 4th stands, that he did not examine him because he thinks that he lacks objectivity.

The defense counsel commented that it was never proven that the memorandum of association brought by Psarras is authentic. The counsel also believes that the testimony of Stavrou showed that this memorandum never existed, that there were no assault squads, that the members of Golden Dawn did not receive military training (by practicing “krypteia”), but on the contrary received ideological lessons and never committed crimes. The claim of Psarras that we are dealing with a criminal organization that has taken the guise of a political party to cover up its tracks seems absurd, because if they wanted to commit crimes, Golden Dawn would have never gone public. Stavrou, on the other hand, even though he stated that he stayed in Golden Dawn to collect evidence of their activities, didn’t testify anything of value to the violent incidents (e.g. the murder of Pavlos Fyssas and the attack against the PAME members). He also stressed that his friends -the people that helped him through his darkest moments- were his comrades in Golden Dawn. The defense counsel then focused on the testimonies of Georgousis, Kardaras, Katrivanou, Papadopoulou (I.), Papadopoulou (K.), and Raptis. The defense counsel concluded that “the witness testimonies added nothing to prove that the indictment is based in fact”.

Defense counsel Zografos said that “we are the ones that have been turned into witnesses of a long series of ‘tourists’, that do not reveal their sources and become witnesses of their own selves.” He believes that Kaminis, Psarras, Baskakis etc. are “witnesses without facts”, and the court should have dealt with eyewitnesses of violent incidents – who it must be said didn’t mention anything prosecutable, said the counsel. The defense counsel then focused on the testimonies of witnesses Liakos, Lolos, Papadopoulos (K.). Katrivanou, Alevizatos, Kouveli, Kourkoulas, Georgousis, Baskakis, and Spourdalakis. As for the testimony of Kaminis, the counsel discussed what he said, that “these people [:the defendants] had the air of the underworld”, while according to the defense counsel “those that take part in the gay prides of the municipality of Athens are better? This is selective legality!” As for Psarras, the defense counsel commented that “he doesn’t accept the right to self-determination, which can be recognized for Jason-Antigone, but not for Michaloliakos”. According to the defense counsel “It’s better that Psarras testified for three whole days, because he was supposed to come to a conclusion, but at the end it was shown that he is not a researcher”, The defense concluded that “It was all for nothing then, nothing has come to light and I wish we had more witnesses like these”.

Defense counsel Papadellis believes that the 37 witnesses, with a few exceptions, had very specific political beliefs. According to the defense counsel they are “journalists who have the irrational belief that Golden Dawn is a Nazi group. These witnesses brought nothing new to the court”. The defense counsel commented especially on the credibility of witness Psarras, stressing that he has been seen “going out in Moschato, or in Brussels, hand in hand with the civil action counsels”. Furthermore, he believes that article 350 CCP has been breached [:the clause of non-communication between witnesses and those that have something to gain from the outcome of the trial]. As for Kaminis, the defense counsel said that the only thing he brought to court was “hypocrisy”. Concerning Stavrou, he said that “his connection to the party was frightfully close and significant”, but the counsel said that he brought nothing new to the hearing. The things he said don’t add up to article 187 CCP [:taking part in a criminal organization]. Furthermore, the defense counsel commented on the testimonies by Spourdalakis, Alivizatos, Katrivanou, and Raptis. The defense counsel concluded that “the testimonies proved so inadequate that they shouldn’t be taken into account by the court”.

Defense counsel Michalolias (N.) noted that he feels that “this trial accepted the testimonies of everyone that wanted to testify. All those, that is, that are political opponents of Golden Dawn”. According to him, Psarras especially “was fantasizing over this for years”. The defense counsel believes that “the document brought here as a memorandum of association is definitely fake” and that Psarras was chosen as the foremost collector of evidence, without being able to give any explanation about how it came to his possession”. Furthermore, the defense counsel commented on the testimonies by Spourdalakis, Bamis, Donas, and Baskakis.

Defense counsel Roussopoulos also focused on the testimony of Psarras. Among other things, he said that the witness is connected with A. Papachella, Ch. Lazaridis, and A. Samaras. Furthermore the defense counsel commented that “Stavrou said that he had quit for personal reasons, because he had married and his wife was pregnant”. The defense counsel tried to discredit the British Channel 4, which aired the documentary by Georgousis. He also thinks that Kaminis is not a credible witness and that Pisimisis gave an “unbelievably racist testimony”. The witness then discussed the testimonies of Katrivanou, Kourkoula, and Spourdalakis.

Defense counsel Alexiadis commented that the journalist witnesses still believe that “if a Golden Dawner sneezes, it’s the leader’s fault. And when you ask them how do they know they say ‘from the media’”. He also paralleled the answers of the professor witnesses with a skit by Kalivatsis in the comedy show “Aman”. Furthermore, the defense counsel commented on the testimonies by Psarras and Stavrou. He stated that the testimony of Psarras should not be admitted to court because of his relations to the civil action counsels.

IV. Statements and objections concerning the examination of the protected witnesses

A. Statements by the civil action counsels

The civil action counsels for the Fyssas family (Tzellis), for the PAME members (Vrettos), and for the Egyptian fishermen (Papadakis) submitted three motions -of similar content- stating that they think that the protected witness framework as laid down by article 9 of law 2928/2001 is extremely problematic. In this vein, they motioned for the examination of the 5 protected witnesses to be carried out, eponymously, in court. If not, they stated that they will not examine the witnesses.

B. Objections by the defense counsels

Defense counsel Michalolias (N.), Michalolias (G.), Papadellis, and Alexiadis, in turn expounded on why their own objections -asking quite the same things- should be taken into account. According to them, the 5 protected witnesses gave their preliminary testimonies anonymously. Now the court has the option to call them to the witness stand. The defense counsels stressed that this is necessary to protect the fairness of the trial under article 6 of the European Convention for Human Rights. If the witnesses aren’t called to the witness stand, then the defense counsels won’t be able to fully fulfill their defense duties – something which would be possible only with the physical presence of the witness. The defense counsels maintained that the measure in question should have never been implemented in the preliminary phase, since it is used in criminal organizations, such as e.g. drug dealing, where the witnesses are indeed in danger, something that is not the case here.

When the state prosecutor noted that the civil action and the defense counsels essentially ask for the same thing, civil action counsels Papadaki, Kabagiannis, and Tzellis objected -forcefully- saying that on the contrary they are completely in opposition: They said that law 2928/2001 as it is implemented “has produced inferior evidentiary results”, something that the civil action doesn’t want. They went on to say that the protected witnesses are still in danger, since the modus operandi of the organization is revenge [so that they should be called to testify in court, but they should also be given police protection].

At this point the presiding judge adjourned for October 16th, 2017, in the Court of Appeals, where the trial will continue with the statements of the state prosecutor concerning the motions by the civil action and the objections by the defense, and, afterwards, the judgment on the Court pertaining to these.