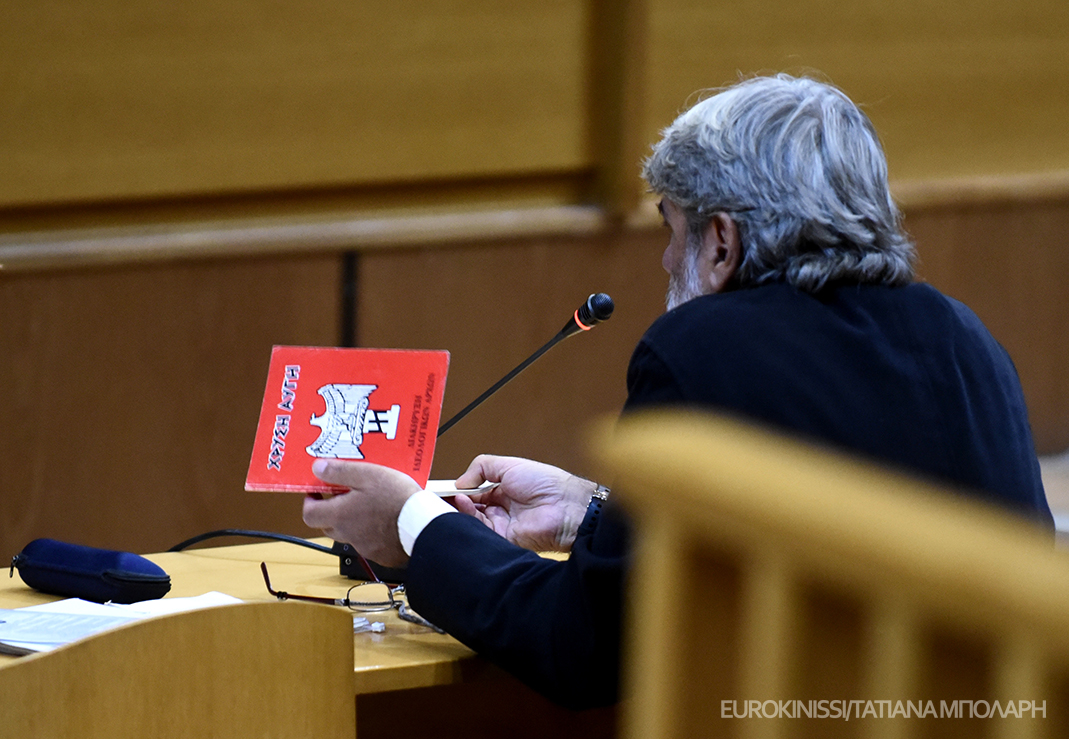 The witness pointed out that, according to the Golden Dawn’s memorandum of association, it’s impossible for another leader to be elected, since it is the leader who appoints the committees that decide the matter. The witness went on to mention the ancient Spartan practice of “krypteia”, which Golden Dawn admires and compares to the assault squads, and went on to explain what it is. The Golden Dawn anthem is identical to the Third Reich anthem and the meander was chosen as its logo, and they included in some of their articles the following explanation: “The perfect meander is the double one, which means the swastika”. The members of Golden Dawn are obliged to give the Nazi salute, praising their leader. Violence is the message of power, and that’s why Golden Dawn uses violence – something that can be deduced from various of its speeches and articles.

The witness obtained the “original” memorandum because they sent it to the magazine Scholiastis (of which the witness was an editor at the time). In January 1988 the magazine ran an article by Aristos Giannopoulos, who had commented on the fact that fascist slogans had started cropping up on the streets of Athens, signed by Golden Dawn. Golden Dawn then responded by sending to the magazine the declaration of intent, its memorandum of association, along with other documents. In the February 1988 issue the editors of the magazine commented that Golden Dawn had inundated the offices with documents. In March 1988, Golden Dawn mentioned in their magazine that Scholiastis didn’t publish their answer, confirming that they had sent the documents themselves and adding that these matters are resolved “with the fist”. According to the witness, Golden Dawn sent the aforementioned documents because it was not a phantom organization, but because they thought they could propagandize their cause, even using negative publicity. The reason was that Scholiastis magazine had a readership of 15,000 people – mostly young men. Golden Dawn had alluded multiple times in that first memorandum before August 2012, when they submitted their second memorandum.

Regarding the murder of P. Fyssas, the witness stated that it was a political assassination, and based his assumption on a specific interview that Michaloliakos had granted to TV anchorman N. Chatzinikolaou. In the pre-trial pleas, Fyssas had been described as a “killer”, because of his nickname “Killah-P”[:Killah-Past, meaning Killer of the Past]. The witness also explained that Roupakias is a prominent member of Golden Dawn because he participated in the groups of the leadership, in the educational and paramilitary activities of the Nikaia chapter, in its assault squads etc. When he was arrested he called from his mobile phone the Golden Dawn headquarters and his district commander.
The witness said that the crimes of Golden Dawn are connected with, and based on, the Nazi ideology, because Golden Dawners believe that most people are sub-humans, such as the anarchists and the whole of the political establishment. Besides, Michaloliakos praises Hitler’s Germany in his book From the ashes of Berlin to… “globalization”. According to the witness, a book written by Michaloliakos was about to be published under the pseudonym “Nikolaos Exarchos”, with the title Adolf Hitler 1945, something that finally didn’t happen. The witness explained that not anyone can become a member of Golden Dawn, you must be an Aryan, according to the memorandum that he submitted to the authorities in his pretrial testimony. The 2012 memorandum states that any Greek citizen is eligible to become a member. However, Michaloliakos has stated that he doesn’t think that Adetokunbo, for example, is a Greek.

The witness referred to the “doublespeak” of Golden Dawn, which states one thing, but the message that is conveyed is completely different. He went on to describe the command of Michaloliakos for an escalation of the violence in 2013, and connected it to the Führerprinzip. The incidents in Vitsi and Meligalas were followed by the attack on the PAME members and the murder of P. Fyssas.

The witness referred to a recent book by Perdikaris – “Ionas Filippou”, which confirms the Führerprinzip. The witness went on to say that the position of Michaloliakos on the trial of Periandros was that it was a frame-up. The fact that Golden Dawn speaks of whole population groups using words such as “worms”, “sub-humans”, etc. points to a murderous conscience. Finally, the Golden Dawn media consist of the newspaper Golden Dawn, Embros, the Meander and the website with its various offshoots.

The witness stated that he has published three books about Golden Dawn. His books The Black Book of Golden Dawn (2012) and Golden Dawn Brought to Justice (2014) mentioned the first memorandum, but did not specifically mention that Golden Dawn had sent it to Scholiastis magazine. He never expected that anyone would ever try to deny it. The first time that someone tried to deny it was in July 2014, when the investigator called him to submit the original document after a demand put forth by Michaloliakos himself. However, he refrained from bringing it to court, because he thinks that this was a ruse from the defense to misdirect the course of the trial. This memorandum is different from the declaration of Golden Dawn. It bears a red stamp and a signature. Another journalist, N. Chasapopoulos, has in his possession a similar document, and has mentioned it in one of his articles.

The witness went on to say that Perdikaris, Kalentzis, and Tsapouris [:“the Athens Polytechnic killer”] were the initial group that along with Michaloliakos “started the whole thing”. As for Perdikaris he seems to be the one who wrote the initial ideological declaration for Golden Dawn and wrote many of its ideological articles. This declaration, written prior to 1991, shows that Golden Dawn is “a purely Nazi organization”. The witness also described the organizational chart of Golden Dawn, which is in his possession, and now has been also found in the house of Pappas.

When questioned whether Golden Dawn numbers among its members people with disabilities, the witness said that he supposes that there must be some, but pointed out that “Goebbels was a person with disability, but he sent many disabled people to the death camps”. He went on to say that journalists and politicians are potential targets of Golden Dawn. When asked if the members of Golden Dawn have ever been harmed after leaving it, he mentioned Chamos, who was beaten because he hosted a speech by Periandros in Larissa, and Kousoumvris, who was turned in to the authorities and was convicted of robbery. He also talked about Periandros, who has said that he was double-crossed by Golden Dawn and that the witness believes he should be called to the witness stand.

As for the murder of Pavlos Fyssas, the witness stated that “he was a well-known antifascist. But Golden Dawn doesn’t harbor personal animosities. It has targets”. And he was targeted on the night of the murder. The attack of Roupakias on Fyssas wasn’t a random event, but a crime planned in advance.

As for the relations of Golden Dawn with religion, the witness stated that they “claim that they are supporters of the Greek Orthodox religion. […] In this they are similar to Hitler. Hitler had said that he would go along a positive Christianity. That’s what Golden Dawn claims in one of their articles, when its members ask how paganism and Christianity can co-exist. And they remain the same, Nazis and pagans”.

When asked about the positions of Golden Dawn on the [:European] Memorandum, the witness stated that “The new memorandum of association mentions that they will fight it. On the currency issue, sometimes they say that we should go back to a national currency, and others that it’s not possible. These are issues that are immaterial to Golden Dawn, they just want to be heard. They don’t have a real political program. The comrades of Golden Dawn in Germany rally against Greece with the NPD. They are Nazis, and they support the occupation army. In that vein, they do not support the war restitutions, even if publicly they state the contrary. At the same time they wear t-shirts with the SS logo”. The witness stated that Michaloliakos had connections to the Greek Junta of 1967, and participated in the group founded by K. Plevris, “4th of August”. The witness went on to describe the relations of Golden Dawn with the employers.

According to the witness it was well-known that there are quarters in the center of Athens that face various problems. At the end of 2010 Golden Dawn created groups of “concerned citizens”. They tried to turn these problems to their advantage by creating scenes of violence, without ever caring to fix the situation in the neighborhoods. As for the food charities, according to the witness they are of a Nazi nature because they help only Greeks, and the same goes with the blood donations of Golden Dawn. He mentioned a front page article in the newspaper Proto Thema, which showed an old lady being helped across the street by a Golden Dawner, saying that he [:the witness] was the one who pointed out that the old lady was the mother of [:prominent Golden Dawn member] Plomaritis.
Finally the witness stated that he has respected fully the defendants’ presumption of innocence, as put forth in the Code of Conduct of the Journalists’ Union of Athens Daily Newspapers.

Defense counsel Oplantzakis, immediately before the customary 30-minute recess, motioned to put into effect article 350 par. 3 of the CCP [:taking measures to prevent the unlawful communication between the witness and anyone else during recess]. The motion was overruled.

Defense counsel Dimitrakopoulos stated (both in writing and verbally) that the witness has poured years of his life into these matters and is a dedicated persecutor of Golden Dawn, that he harbors beliefs that are anti-Hellenic, and that the defense counsel will not examine the witness because he believes that he is not objective.

The civil action counsels motioned to postpone the comments on the last 37 witness testimonies to the hearing after the next one, in order to have enough time to prepare. The motion was overruled.

At this point the presiding judge adjourned for October 5th, 2017, in the Women’s Wing of Korydallos Prison, where the testimony of witness Dimitrios Psarras is expected to conclude, and the comments on the witness testimonies of the last 37 witness, under article 358 of the CCP, will begin.