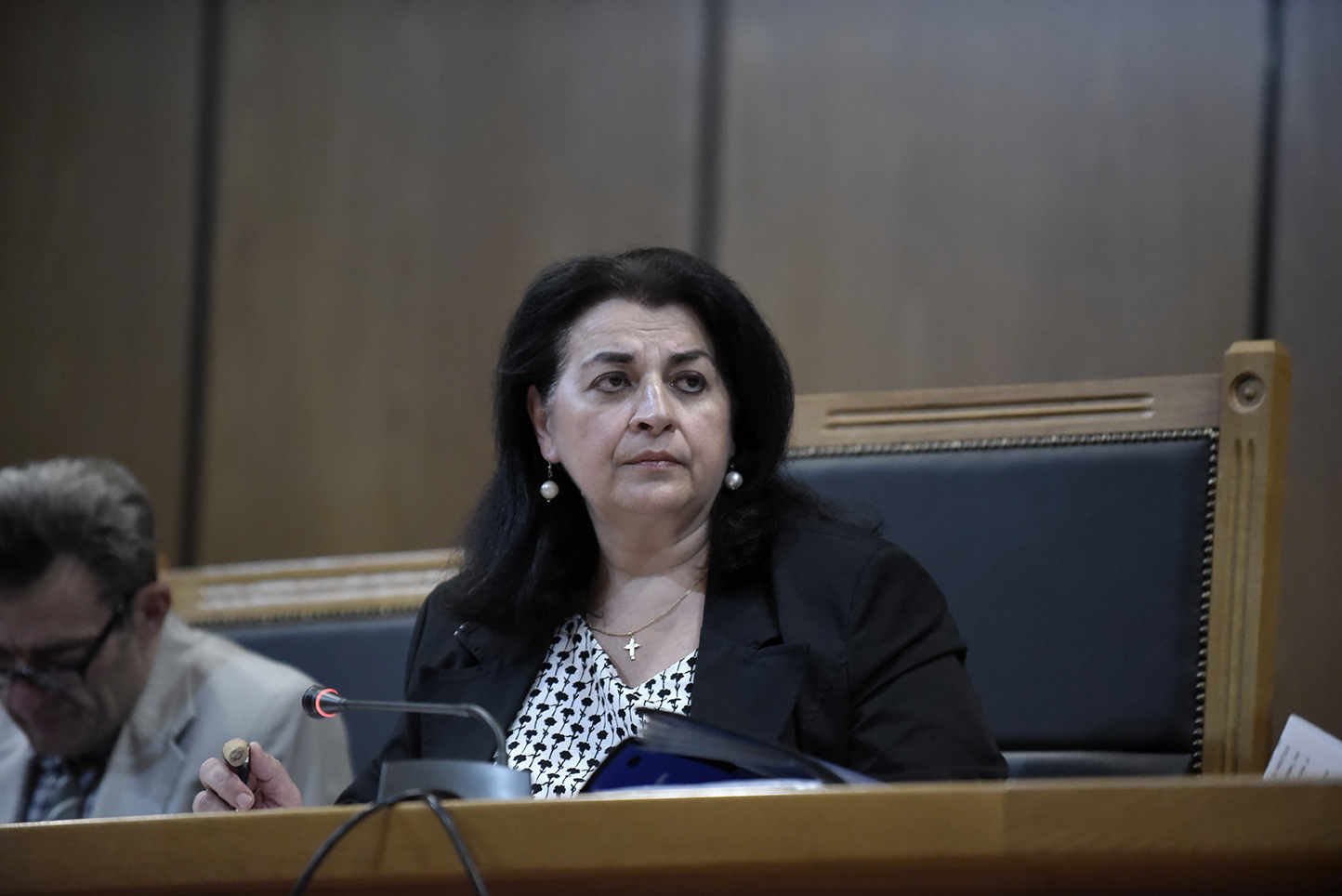 Day 181: Nothing happened in Golden Dawn without an order or a direct permission.

The courtroom remains open to the public upon presentation of a state ID card, which is retained by court authorities for the duration of the session. There was a larger number of people in the audience today, compared to other hearings, and outside the courtroom was, apart from the usual police force, a fire truck, an ambulance motorbike, and a TV crew. There were members of the press present in the courtroom.

C. Conclusion of examination by the civil action counsels

The witness stated that Golden Dawners believe that military marches and military garb would instill respect in the citizens that would witness a rally, and fear in the hearts of those that would clash with them. That is, persons from the far-left/anarchist part of the political spectrum. Concerning the phrase “we will sharpen our bayonettes on the pavements”, the witness stated that it was said in 2012 by Michaloliakos in Thermopylae and that is a line from an SA marching song [:Sturmabteilung – Assault squads in Hitler’s Germany].

When asked whether Golden Dawn has any ties to the criminal underworld, the witness stated that this was what he witnessed. He also said that inside the party the “assault squads” are called “security teams” and always act under the surveillance of prominent members of Golden Dawn; their role was to implement the party’s strategy.

In addition, the witness testified that from 2012 onwards, there was no chance that you would see a Hitler poster or a swastika in a Golden Dawn office, and concerning the ideology he said that up to December 1st, 2013, it was that of nationalism-socialism, and that the phrase “Vote so you don’t have to vote again” meant that if they could take the necessary number of votes, the people wouldn’t vote ever again, since the democratic state would be dismantled. Responding to a relevant question he said that violence is an ideological component of Golden Dawn. “It’s not possible to espouse nationalism-socialism and denounce violence, that’s a contradiction.”

Concerning the murder of Pavlos Fyssas, the witness said that it didn’t surprise him because “When you put people in the streets and promote violence, at some point a murder will take place”. He also noted that nothing happened in Golden Dawn without an order or a direct permission, or else you could be reprimanded or even kicked out. The same happened if the committed act was greater in scale than the order that had been given.

Concerning the connection between the Police and Golden Dawn and whether it was successfully established, the witness said that he can see that immigrant stalls are being kicked over and the police does nothing, so it stands to reason it succeeded.

When asked, the witness said that there is an official anthem of Golden Dawn and an unofficial one, which is the official anthem of Nationalism-Socialism, and that all [neo-nazi] parties in Europe copy the music of Hitler’s anthem and make it their own. This is the “Flag on High” [:Anthem of the Nazi party]. As regards the party membership card, which doesn’t give the name and surname, the witness stated that it proves the bearer’s total inclusion in the party, since in Nationalism Socialism it’s not the person that is important, exactly as in the army. You are Golden Dawner number so and so. It’s not about the person, but about the race.

When asked about his swearing in as a Golden Dawner, he said that according to party protocol they didn’t sing the Greek national anthem nor did they have the Greek flag, but a flag of the 3rd Reich Navy. The witness went on to clarify that for the Golden Dawners the position of the State has been replaced by the party’s hierarchy and ideology. Whether an act was reprehensible or not, he could only judge according to party ideology, not the rule of law.

Regarding the slogan “Blood and honor”, the witness stated that it is the same with the “Blut und Ehre” of the Hitler Youth. He went on to say that as he himself didn’t just one day find himself in Golden Dawn by chance, didn’t become a candidate and make speeches from one day to the next etc., so Boukouras, whom he saw crying in the Greek Parliament and saying that he didn’t know who Hitler was, had full knowledge since he had celebrated Easter 2013 with him in Korinthos, and there were posters of Hitler, swastikas and SS flags everywhere.

Finally, even if he himself didn’t know about the swearing in process he wasn’t suprised or feel any animosity towards the Third Reich flag, since this was his ideology at the time.

The witness was examined in turn by defense counsels Kassis, Dimitrakopoulos, Tsagas, Veletza, and Zografos.

Responding to questions the witness stated that he was working as a consultant in the Greek Parliament, and his wages were paid by the state, not by the party. The witness testified that it was fear that drove him to testify 7 months after his resignation, instead of right away.

The witness also stated that he had no friendly relations with Michaloliakos, and thus he didn’t know if the leader appreciated him, and that their contact was restricted to Michaloliakos coming into the office and saying hello to him, Tsagas, and Dimitrakopoulos. Concerning the speeches he wrote, he said that he was always following protocol and that they were always checked. They could be about a press release from the office of Kasidiaris, or about a speech in one of the local chapters given by the chapter’s leader.

When asked why he went to GADA [:the General Attica Police Directorate] when Michaloliakos was arrested, since he had already resigned as consultant and was in fear, the witness stated that it was an order and that it was one of his duties as a member of Golden Dawn. He also said that Radis cut all contact with him, because the witness put his name in his testimony and since he was a policeman, that became a real problem for him. The witness went on to say that as he was trying to quit his job at any cost, he went to the Parliament dressed shabbily, always late, and wasn’t very productive, in order to show that if they kept him there he would only be a burden to the party.

Concerning the murder of Fyssas, the witness stated that both Michaloliakos and Kasidiaris condemned the act in Parliament, but he also added that “it was evident that they had ordered the murder, so they couldn’t come out and say that we congratulate you for the order that we gave you”, so their actions were totally predictable.

Concerning the audiovisual material he gave to the investigators during his preliminary testimony, the witness stated that he gave them everything he had and that he is in no position to judge whether they would be useful as evidence or even the credibility of the person that brings them to the authorities. Responding to another question he said that the offices of Golden Dawn have been attacked many times and that some members carried guns because they were afraid. However, the degree of fear one feels is relative to his area of residence, for example, the witness lives in Veroia, a town with a very active antifascist scene, so it was logical for him to be afraid.

Concerning the period that Golden Dawn used to organize food charities only for Greeks, and helped people that faced problems with the rising crime levels, the witness said that Golden Dawners don’t do these things from the goodness of their hearts, like Good Samaritans. Their goal as Nationalists-Socialists is to effect their own vision, attracting people for the state they want to found. The witness stated that he had been introduced to Roupakias by Barekas only with his first name, as a member of Golden Dawn, and he later recognized him on TV.

Concerning the phrase “we crush their politically correctness without fear and with passion”, he explained that it means that whenever they find themselves opposite their ideological opponents, they follow their own course and do not change the way they express themselves according to what is termed as politically correct. When he was asked if he had been ordered by the party to call the homosexuals “faggots”, he answered “I was a Golden Dawner, and that’s why I called them faggots”.