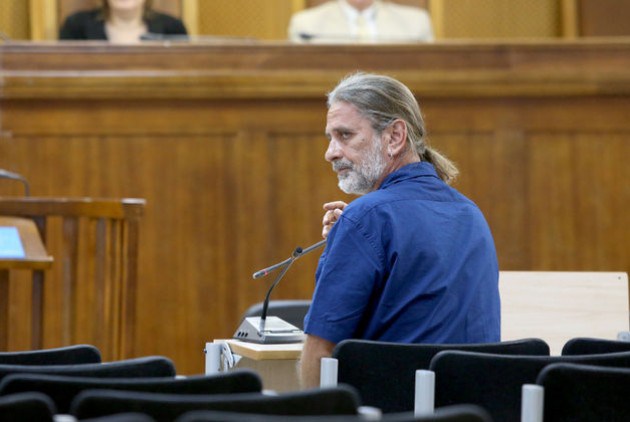 DAY 167: “NATURE IS NOT A MONOCULTURE, CONTRARY TO THE BELIEF OF GOLDEN DAWN”

The courtroom remains open to the public upon presentation of a state ID card, which is retained by court authorities for the duration of the session. There were many spectators and members of the press in the courtroom. It should be noted that this hearing was attended by a delegation from the parliamentary group GUE/NGL of the European Parliament.

The hearing commenced and concluded with the testimony of witness Marios Lolos, President of the Union of Press Photographers of Greece.

Responding to questions by the members of the court the witness testified that he has been working as a press photographer for the past 27 years, and that he has been the president of the Union of Press Photographers for the past 11 years. Concerning the incident that took place at the Court of Appeals in 2014, he said that he wasn’t present, but that he was informed that three of his colleagues had sustained an attack by members of Golden Dawn which was unprovoked, since, as he noted, press journalists strive to remain unnoticed, and never interfere. The victims of the attack were Giannis Kemmos, Symela Pantzartzi, and another colleague from the French News Agency. He was told that everything happened very fast, that a group detached itself from the crowd and attacked Symela, who was kicked in the ribs, and that Kemmos suddenly fell under the protective barrier. The witness said that he didn’t know if someone ordered the attack. Despite the fact that his colleagues did not wish to press charges, the union did lodge a complaint, since, as Lolos noted, photographers should be like sacred cows, meaning that they should [remain unharmed to] record everything that happens.

Responding to a question by the presiding judge, the witness stated that he has never covered a Golden Dawn rally as a press photographer. However, in 2009, working for the newspaper Eleftheros Typos, then owned by Gianna Angelopoulou, he was called upon to cover the protests of the residents of Agios Panteleimonas about the immigrant problem. The witness stated that he felt a pressure against his person by the “concerned citizens”, such as Skordeli, who took pictures of him with her mobile phone. The witness testified that he had witnessed the beating of an Afghan man behind the church by a group of muscled men with close-cropped hair, who were shouting slogans such as “Immigrants out”, “Golden Dawn will clean up” and who later proved to be members of Golden Dawn.
Responding to another question by the presiding judge, the witness stated that members of Golden Dawn photographed his colleagues, in order to recognize them at a future rally. The witness repeated that press photographers take pictures not to target someone but to record an event. The witness supported that no one from Golden Dawn has ever requested not to be photographed. Referring to the incident involving Kasidiaris, the witness stated that he was present, although he wasn’t an eyewitness. He watched a video of it later, and testified that a Reuters journalist was hit. He stressed that the attack on his colleague was unprovoked.

Responding to questions by the state prosecutor, Lolos said that he has never been asked by members of Golden Dawn to photograph them, and that usually a press release is issued and certain press photographers go there to cover it. The witness went on to say that his colleagues have never been attacked by other political parties, and when asked about the stance of the police, the witness stated that they never did anything to protect his colleagues.
Concerning the complaint lodged by the Union of Press Photographers about the attack at the Court of Appeals, he said that it was directed at the Ministry of Public Order, and a meeting took place which was attended by other groups, such as the Journalists’ Union of Athens Daily Newspapers, whereupon a memorandum was submitted, but nothing came of it. Referring to another incident in Piraeus, he said that during a clash between anarchists and members of Golden Dawn, a helmeted man on the side of Golden Dawn went at a camera on a tripod with a crowbar and the cameraman barely escaped.

Responding to questions by the assistant state prosecutor the witness stated that [Golden Dawn] did not want press photographers in Agios Panteleimonas, so that they wouldn’t photograph what they [Golden Dawners] did to the immigrants.

Responding to questions by the civil action counsels, the witness stated that the incident of July 4th, 2013, at the Court of Appeals was not an isolated one, and that his colleagues are very careful when covering a Golden Dawn rally. He supposes that the people who led the attack at the Court of Appeals were the MPs, since they are the ones that say what the members can and can’t do. He stated that he saw in a video the MPs of Golden Dawn standing in front of the barrier, while behind the barrier, where the assailants came from, stood the members and supporters of Golden Dawn. Responding to a relevant question the witness stated that when a group of seven people detached itself and headed towards the same direction, it meant that it wasn’t random, and their aim was to harass his colleagues.
Concerning the behavior of Kasidiaris, the witness said that he has never seen an elected representative act like that, and that the only thing he can think of is that he wanted to send a message to the supporters of Golden Dawn as he was leaving, that “we are strong here”.

Lolos stressed that he has differences of values, politics, and simple human nature with Golden Dawn, because, as he said, “Nature is not a monoculture, the whole earth covered by wheat. That’s the view of Golden Dawn. I want to be able to live side by side with immigrants”.

The witness went on to respond to questions by the defense counsels, saying that his testimony to the investigators had to do with the attack at the Court of Appeals and that’s why he hadn’t mentioned the attack he had witnessed in Agios Panteleimonas. He said that he put the phrase “concerned citizens” in quotation marks because it was later proven that they were simply prominent members of Golden Dawn, among them Skordeli, who was on the party’s ballot. He said that it’s one thing to ask of the ministry to implement a sound immigrant policy and to take immigrants to hostels, and quite another to hunt and attack immigrants.

Responding to another question he said that he went to testify after a telephone call he received, and said that if someone doesn’t want to be photographed in a public function, then he shouldn’t stand right at the front, or else he can go to court over it. He said that Kasidiaris is a public official and a defendant, however he never heard the MP say that he wishes not to be photographed. The witness stated that Golden Dawn holds a military view, which he hasn’t seen in any other political party, saying that the only harassment he has witnessed is by Golden Dawn and riot police units. As he said, he has gone to photograph conflicts in war zones and the place he almost got killed was Syntagma Square.

Lolos testified that press photographers are always present, because, as he said, “we are your eyes”. He went on to say that, following a decision by the union, he handed over to the investigators the photographic archive he had put together, since Golden Dawn had a very specific activity, and he thought it necessary that these pieces of evidence be accessible. He stated that the complaint lodged by the Union of Press Photographers had a double target, blaming on the one hand Golden Dawn and on the other the Police’s apathetic stance, mentioning that the police school had unofficial Golden Dawn groups, as was reported in the magazine Unfollow.

He referred to another incident, a few hours after the murder of Fyssas in Keratsini, when “concerned citizens” stood next to the riot police units and were throwing stones. From the slogans they used he surmised they were members of Golden Dawn.

The witness stated that he hasn’t seen photographs from the attack on the Afghan man in Agios Panteleimonas, since it was dark, and hence there were technical difficulties, and everything happened very fast. Lastly, he repeated that Kasidiaris is a public functionary and as an MP he can’t invoke the protection of private data.