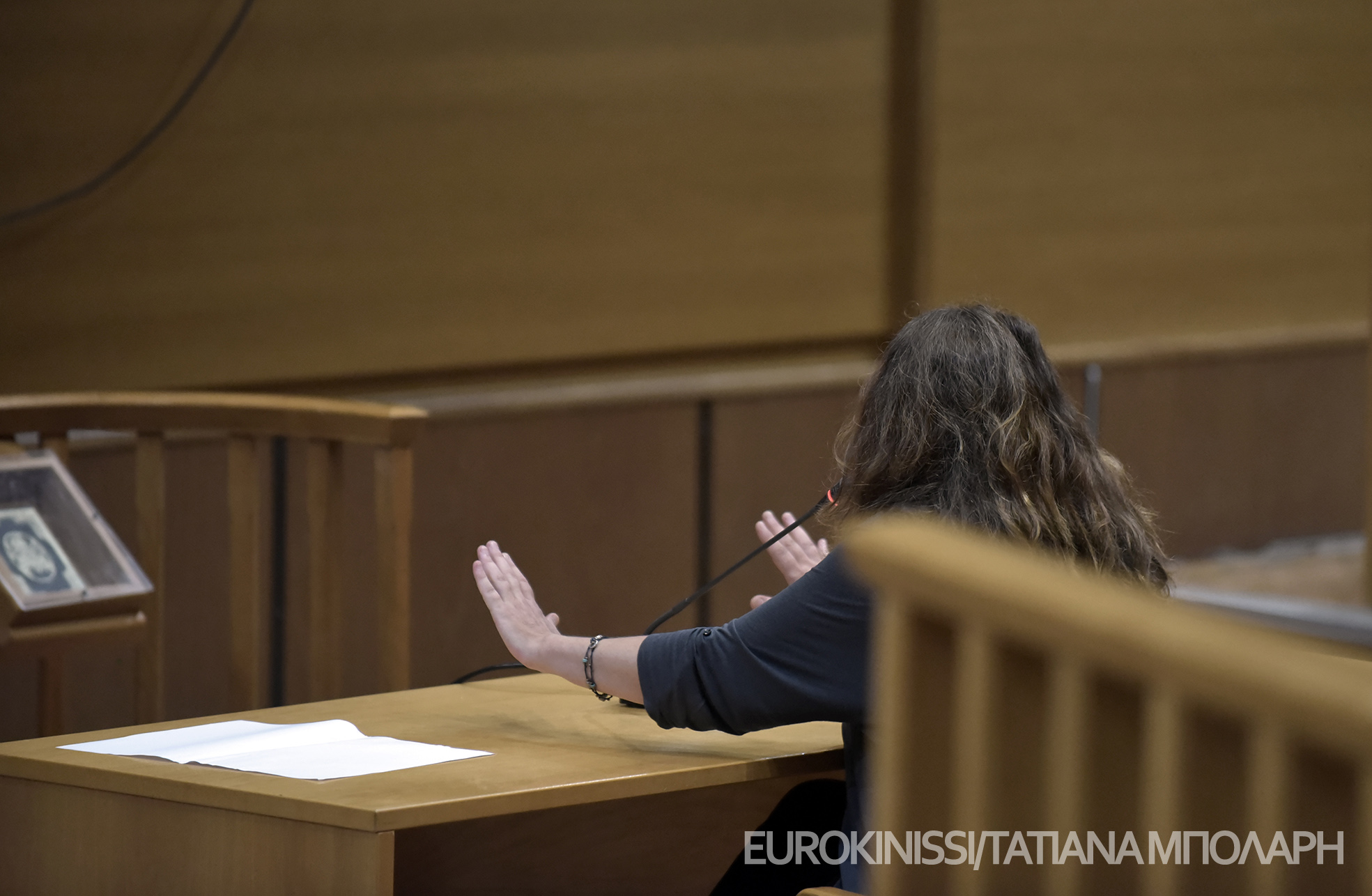 DAY 173: “WE WILL CLEAN UP AS WE DID IN AGIOS PANTELEIMONAS”

Next to take the floor to examine witness Ilias Donas, former mayor of Oichalia, were the defense counsels. Responding to questions by the defense counsels concerning the incidents at Meligalas, the witness in short said that some of the attendees protested because the members of Golden Dawn had appeared to the Meligalas annual memorial service wearing Golden Dawn garb. As he said, no one should be allowed to enter a memorial site wearing clothes that insult the memory of the dead. Responding to another question the witness said that he’s wearing a shirt with Golden Dawn insignia only when he goes to tend his field, and that it is not becoming to wear it at a memorial service.

When he was asked by the presiding judge where did he find this shirt emblazoned with Golden Dawn insignia, the witness said that it is available everywhere. Responding to another question he said that there was never any trouble during the annual memorial service before 2013, even though it had been attended by members of Golden Dawn wearing the same clothes. However, people had complained afterwards, some relatives of the deceased, about the appearance of the members and supporters of Golden Dawn. And so, as he said, the next year, they conducted checks near the village of Meropi and did not allow anyone dressed in this way to approach the memorial site. As for the incident, the witness stated that he wasn’t afraid, and despite the Police order for the municipal council to vacate the site, he stayed back. As he said, “I believe that the TV channels blew the whole thing all out of proportion”. Responding to a question by the presiding judge concerning whether the channels blew the images out of proportion, the witness said that they hadn’t.

Responding to questions by the presiding judge, the witness, a photojournalist, testified about the verbal and physical violence against her own person as well as colleagues, by members of Golden Dawn. She commenced her testimony speaking about the attack against her person in 2011 in Agios Panteleimonas. On that day an antiracist concert was to be held in the Agios Panteleimonas Square and the witness was there to photograph the event. Members and supporters of Golden Dawn occupied the Agios Panteleimonas Square in order to prevent the concert from taking place. As she said, “They acted as if the square belonged to them”. About two hundred people had been gathered on the square, many of them holding Golden Dawn banners, bats and clubs, while some wore motorcycle helmets or Golden Dawn caps. There were violent clashes between the gathered Golden Dawners and the police. As the clashes with the riot police units were unfolding, some Golden Dawners entered the Church of Agios Panteleimonas during holy mass. The riot police then agreed to step back and the clashes stopped. When she saw that the people started coming out of the church and there was no police around, she attempted to leave. It was then that a tall man holding a wooden club started following her, swearing at her, and hitting her from behind. She ran away while the man continued to pursue and hit her. Responding to a question about the reason for the attack, the witness talked about “scare tactics, they had stopped other colleagues from taking photographs… It could be because I’m a woman and a street photojournalist.”

The witness then went on to testify about everything she witnessed at the Court of Appeals, in February 2014, when the Golden Dawn MPs were scheduled to testify. Golden Dawn supporters had gathered outside the courthouse. When the decision to jail Michaloliakos was made known to the crowd, they became enraged, and along with Kasidiaris and Panagiotaros they started running up the steps to the Court of Appeals entrance. The crowd started throwing things to the photojournalists and started swearing at them. They were shouting “scum, snitches, journalists” and moved threateningly towards them with raised fists. When the decision was announced, the police departed and the doors to the Court of Appeals were closed. The journalists were “trapped” where they stood. The policemen that were present inside the Court of Appeals, behind the closed glass doors, did nothing to protect the photojournalists. The witness stated that “I was knocking on the locked door asking them to do something. I could see 3 or 4 policemen”, and the answer she got was “Oh, now you need us?” The harassment stopped when MP Kasidiaris gave a hand signal to the assailants to stop. “It was then that they stopped immediately. They were running towards us full tilt and they stopped dead. I suppose that it was not in their best interests to start a riot”.

The witness also spoke about clear orders given by Panagiotaros, Kasidiaris, and Michos, who were making hand signs to start and stop the incidents during the transfer of Michaloliakos to the Court of Appeals, in July of 2014. Responding to a question by the state prosecutor the witness stated that she could see the hand signs through the zoom lens of her camera, and that there are videos that prove it. The witness stated that she was attacked on that day, along with her colleagues Louiza Goulielmaki and Giannis Kemmos. Concerning the unprovoked attack on her person, the witness said that she was in Loukareos Street when a very large man with close-cropped hair hit from behind the camera that was hanging from her neck. She felt as if her neck would snap, and immediately felt an even stronger punch to her ribs.

Responding to questions by the civil action counsels concerning her injury, the witness said that she had recently been operated on the spot that she was hit. The punch was so strong that she felt her spine move. The doctor at first told her to have an X-ray which did not show the crack in her hip, something that was shown in the MRI that she had next. She did not work for a month, and she was in pain for six months. In total, she had pain and various complications due to her injury for a whole year. The witness stated that she has the medical certificates that prove it, and can submit them to the court.

As she said, she did not press charges, because she thought that there wasn’t enough hard evidence to prosecute the case. The legal process was started after a press release that was issued by the journalist association, and she was called to testify in the next few days. Responding to another relevant question, she stated that she didn’t talk about the hand signs of the MPs during the preliminary testimony, because she was answering specific questions by the investigator.

Responding to questions by the presiding judge the witness stated that he is a journalist since 2004 and that he has been researching the activities of Golden Dawn since 2010. The witness stated that on the night of October 1st, 2010, he was in Agios Panteleimonas when he saw a group of ten teenagers sitting on the steps of the church. The witness said that suddenly he heard someone whistle and the group got up and started chasing an immigrant, whom they caught, pushed against the closed shutters of a shop, and started beating him up. The immigrant ran away and the group chased him again until one of the teenagers kicked him from behind and the immigrant fell on the side mirror of a car. At that point the owner of the car showed up and saw that the immigrant had broken the side mirror when he fell on it. He was protesting about the broken mirror and started swearing. A crowd was gathered on that spot, among them Golden Dawn MP Panagiotaros. The owner of the car told Panagiotaros “You should stop them, they are under your orders”. Panagiotaros tried to assuage him about the broken mirror and the teenagers were watching the whole discussion.

The witness then said that he wrote an article about everything that he saw and went again to the Agios Panteleimonas Square to photograph the site at night. He was on the square with one of his colleagues, and two men came up to them and told them that the Police forbids the taking of photographs. The journalists told them that they are residents of the area. At that point Panagiotaros appeared, escorted by another man. They explained that they were journalists and Panagiotaros started ranting about immigrants. He told the witness that “only whites and Christians are our brothers, the brothers of Greeks” and added that “when Golden Dawn elects a municipal council, we will make a pogrom and clean up Victoria Square and Attiki Square, the same way we did with Agios Panteleimonas”.

About Panagiotaros the witness stated that in 2005 he was along with other Golden Dawners a member of the “Blue Army”, a football fan club supporting the National Soccer Team. As a spokesman for the “Blue Army”, he had said after a soccer match between Greece and Albania that “Hate is legitimate when it is turned against subhumans”.

At this point the presiding judge adjourned for Monday, July 17th, 2017, at 09:00, in the Women’s Wing of Korydallos Prison.