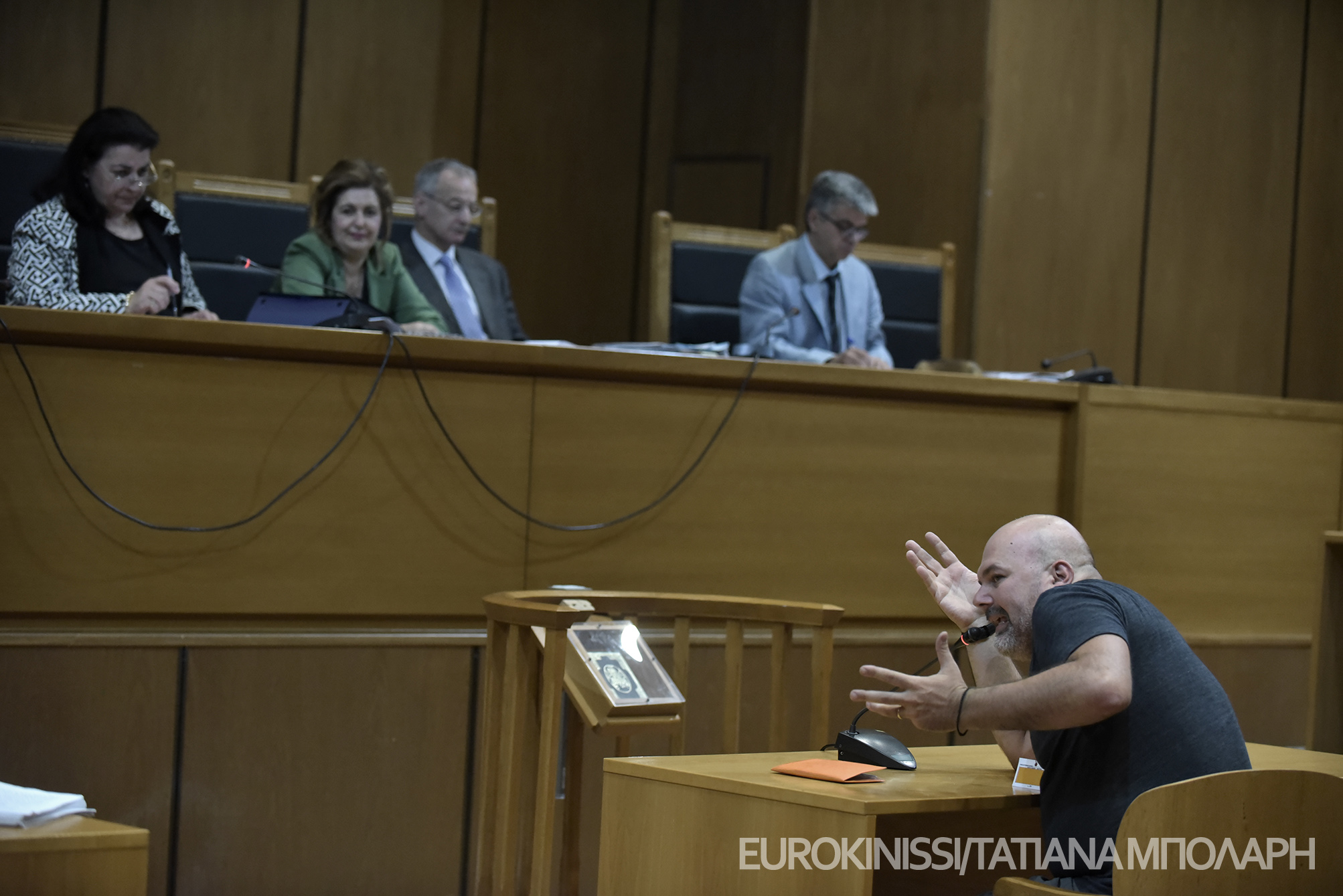 Responding to questions by the presiding judge, the witness stated that in March 2013 he was working as a TV reporter for STAR channel when he was attacked. There was a rally to protest the murder of two Golden Dawners (Kapelonis and Fountoulis), heading from the offices of Golden Dawn to the cemetery of Neo Irakleio for the 40-day memorial service. The witness was at the head of the rally with the cameraman. The cause of the attack was the comment of a resident of an apartment block who protested the rally from his balcony. At that point some of the gathered people went towards the apartment block and altercations ensued, and a few others went towards the witness and the cameraman and asked them not to record the incident. At the same time three large men attacked them verbally and physically. The largest of them punched the witness on the head causing him to bleed, as well as a scratch on the ear. The cameraman was also attacked. As he said, they left the scene of the attack in a hurry.

At the scene was a high-ranking police officer and a few feet further away was a traffic policeman, both of whom did not react in the slightest. The police officers did not ask them if they required assistance, neither did they call for an ambulance or notify police HQ about the incidents. Responding to a relevant question concerning the preliminary stage of the inquiry, the witness stated that he acted after a few articles that were published and that while he was called to testify, he was never informed about the progress of the case.

The rally had been attended by MPs Kasidiaris, Germenis, and Iliopoulos, whom he didn’t see taking part in the attack against his person, neither did they do anything to stop it.

The witness went on to say that he’s covered many Golden Dawn rallie from 1995 until today. All these years there’s always been instructions on where to stand and the time they were allowed to film, and it was not unheard of for the Golden Dawners to completely forbid the reporters to film anything.

Responding to a relevant question by the state prosecutor the witness stated that most of the people present at the memorial service wore black clothes emblazoned with Golden Dawn insignia and they were marching in formation.
Responding to another question by the deputy state prosecutor, the witness stated that there was a climate of fear and terror and that Golden Dawn wants to completely control how things are done in their rallies.

Responding to questions by the civil action counsels, the witness gave a few examples of violent behavior by prominent members of Golden Dawn. He made specific mention to the incident between Kasidiaris and Dendias in the Greek parliament, and said that it is completely unheard of for a MP to pass in front of another and just because the latter is speaking at the moment, to become agitated and start swearing at the MP passing by. The witness went on to say that Golden Dawners are no staunch supporters of democracy and added that they don’t feel at ease with anything that is different and that they have a fascist ideology.

Finally, he verified the description he had given in his preliminary testimony, which said that he was attacked by three muscular men and that the one that hit him was very large and had a shaved head and a goatee.

Responding to questions about whether the witness had insisted on recording the incident, the witness answered that under no circumstances would he have insisted, on the one hand because he had no time to react, and on the other because there was no way that he would cause trouble in the middle of a memorial service. He also said that he is under the impression that the three men left the main group of the rally, although he didn’t see exactly where from, and that the rest of the bystanders did not react when the witness was attacked. He also cleared up that he never got to film the incident with the apartment block resident.

Responding to questions by the presiding judge the witness stated that he is a photojournalist since 2011 and the owner of a news agency. During the transfer of Michaloliakos and Pappas to the Court of Appeals, he was there to cover it. There were more journalists there, as well as a large police force and about two hundred people gathered. There were also about a dozen people dressed in the Golden Dawn “uniform”, who were organizing the gathered crowd. The witness went on to say that the transfer had just been completed when the police cordon suddenly was breached and clashes started. The witness took a few photos and saw at the scene of the riot his colleagues Liakos, Zontanos, Goulielmaki, and Pantzartzi. He saw four to five men from the organizers come quickly next to him, where his colleague Louiza Goulielmaki was standing. He had just enough time to hear them shout “Get lost, don’t take any pictures”, and then they harassed her and hit her on the face. The witness and Goulielmaki immediately took off. A few seconds later he found himself next to Kemmos, another of his colleagues, right on the median strip of Alexandras Ave. The witness saw three or four of the organizers beating Kemmos. One of them was definitely the same person that had beaten Goulielmaki and as he said he has seen him in the personal guard of the leader of Golden Dawn. They told him “Why are you taking pictures?” and immediately they pushed him and hit him on the head and neck. He collapsed in the street where he was kicked on the head by someone wearing army boots. It must be noted that a passing car had braked just in time, and he could easily have had his head squashed beneath the tires. As the witness said, Kemmos was so dizzy that he lost all contact with his surroundings, and could not remember anything that had happened in those few seconds. The witness also stated that at the same time photojournalist Symela Pantzartzi was also attacked, while in another incident photographer Tatiana Bolari was beaten right in front of him.

The witness went on to say that on the line of duty, he has covered other rallies and events organized by Golden Dawn, and that there are times that they permit photographs to be taken and others they don’t, depending on how much they think that things will go off course. The witness added that he has received phone calls to take down photographs that he has already published. The exception to the rule are the Imia celebrations, which as he said are a well-organized show. There they permit the journalists to take as many photos as they want. The witness also said that there are times that they want to change the angle of photography and that he has been reprimanded because they didn’t like the angle from which he photographed Michaloliakos, and that he has heard the phrase “don’t take any photos” many times, even from MP Ilias Kasidiaris.

Concerning the stance by Kasidiaris, the witness stated that he has seen the attack on a Reuters journalist and commented that Kasidiaris has a tendency towards violence, and when he directs them or forbids them to photograph he is overly sure of himself. The witness is of the opinion that Kasidiaris is either a psychiatric case, or acts as if he’s on drugs. This comment was criticized by the defense counsels, and as a result defense counsel Dimitrakopoulos refused to question the witness, while defense counsel Roussopoulos asked the witness if he is a psychiatrist and how he arrived at this conclusion. The witness answered that as a photojournalist he has photographed many people that are in psychiatric care as well as many drug addicts and this is where he bases his evaluation.

At this point the presiding judge adjourned for Tuesday, July 11th, 2017, at 09:00, in the Women’s Wing of Korydallos Prison.