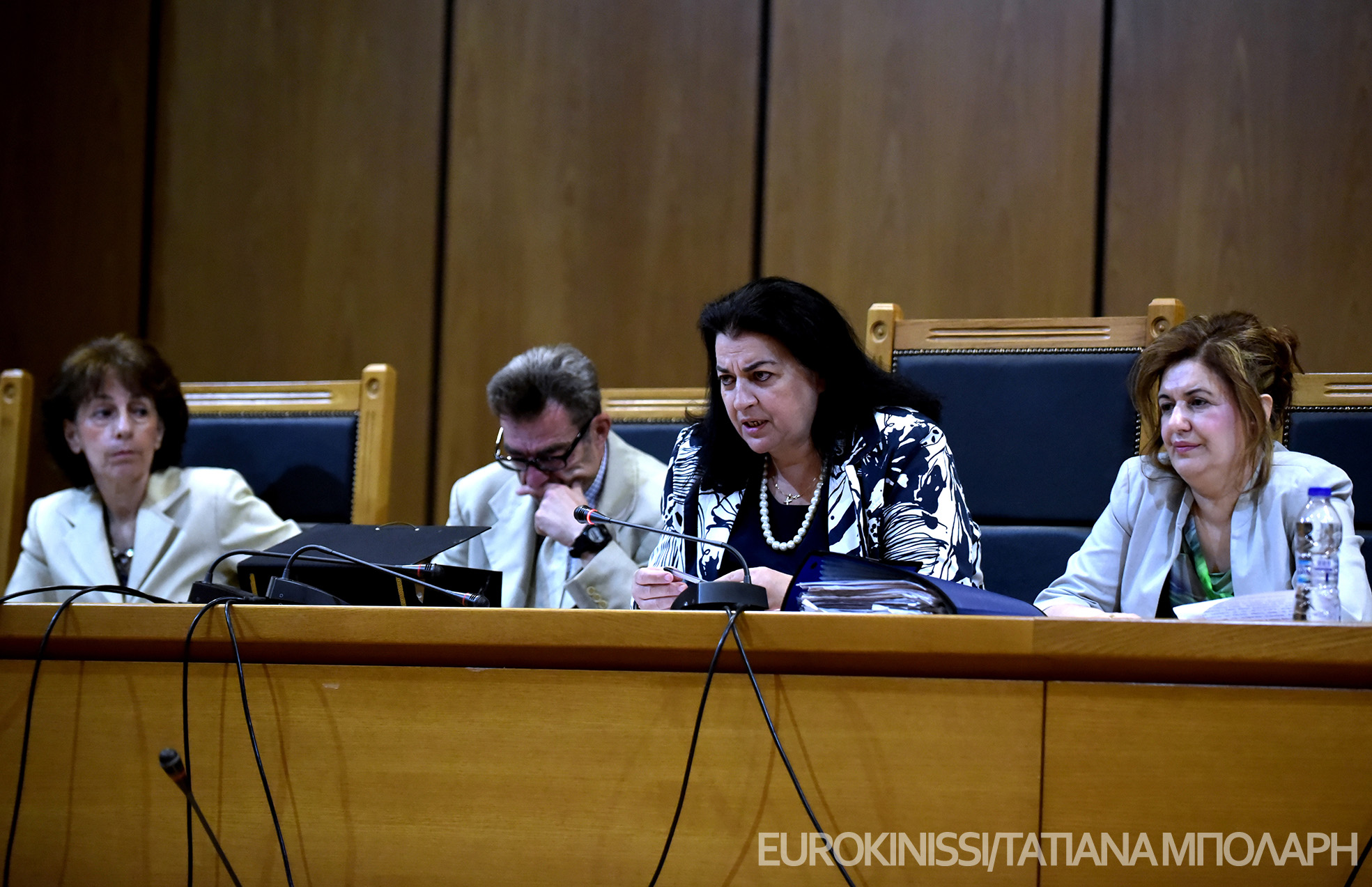 DAY 169: “WHATEVER IT WAS, NOTHING CAN JUSTIFY A STABBING”

Continuing from where she’d left off at the previous hearing, the presiding judge asked the witness to clarify a few things. The witness answered that he started working as a journalist in 2006 and that he has been specifically researching Golden Dawn since 2012. He stated that he personally met N. Boukias [a witness that will testify later in the course of this trial], concerning the incident that took place in Veranzerou Street in September 7th, 2013. He then wrote an article, which was published on October 7th, 2013. He had been called to testify about that article in the preliminary stage. Furthermore, he has written many articles on Golden Dawn in Efimerida ton Syntakton since the end of 2012, beginning of 2013.

B. Examination of the witness by the civil action counsels continues.

The witness testified that no one has ever disputed that Patelis has said “anything that moves is slaughtered”, which the witness has mentioned in one of his articles, neither has he been sued about it. In general, Golden Dawn has never pressed charges against him about his articles. He believes that this can be attributed to the fact that a journalist is sued when the contents of an article are false.

The witness referred to a pogrom in Agios Panteleimonas, based on his own research and on extant photographic evidence. More specifically he said that after the murder of Kafantaris a rally was organized and lead by Kasidiaris, who had a blowhorn, and which was attended by other prominent members of Golden Dawn, during which they assaulted many people. Koliopoulos has been convicted for crimes committed on that day. As for the attacks in the street fruit markets, the witness doesn’t believe they are random occurrences, since Golden Dawn MPs participated as leaders, and the attacks had many common characteristics. According to the witness the Golden Dawners attacked Antiochos because they thought he was one of their political opponents, based entirely on his appearance. Poulikogiannis was hit because he was a political opponent.

As for the Antipnoia case, the witness stated that the legal terms for the crimes committed changed from misdemeanor to felony, and the perpetrators were convicted for attempted murder. Golden Dawn said it had nothing to do with the incident, however the [convicted] Siatounis was a candidate in the elections of 2012.
The witness was shown many photographs. He identified many prominent members of Golden Dawn and discussed their mode of dress, the places they had been photographed etc. The witness identified the Golden Dawn members because he is well versed in their activities, because of his research. Among others he identified Pantazis in a Golden Dawn event in Schisto in 2015. From the photographs it can be surmised that the goal of Golden Dawn is discipline, since the assault squads operate in this manner.

The witness has never interviewed an active member of Golden Dawn, only an ex-member, Ch. Rigas. He also referred to a talk given by Periandros Androutsopoulos in the hall of the Larissa Patriotikos Syndesmos, where he was lambasting Golden Dawn because they deny that a part of their members are like Roupakias.
Responding to a relevant question the witness stated that he believes that the leadership of Golden Dawn is in the hands of Michaloliakos and then the Political Council (Kasidiaris, Lagos, Matthaiopoulos, Germenis, Mouzakitis, Chrysomallis -the last two are not defendants in this trial- etc.) According to the witness the above can be gleaned from announcements that Golden Dawn itself has made in its own conferences -such as one made in 2011- and that these committees are not provided for in its memorandum of association. The Political Council is made up of seven people on a rotating basis. Pappas, who is not a member of the Political Council, is a close associate of Michaloliakos and writes all edicts.

Responding to a question about the Führer Principle and whether it applies to Golden Dawn, the witness testified that the memorandum of association from 1980 -which he knows from his colleague [and future witness in this trial] Psarras- there is an article that refers to the Führer Principle, and says that all decisions are taken by the Leader. The witness attributed the phrase “the guys in black” to Michaloliakos, and said that he believes he meant the members of Golden Dawn.

The witness was questioned by following defense counsels, in the order they are mentioned: Pantazis, Dimitrakopoulos, Tsagas, Zografos, Oplantzakis, Velentza, Michalolias (N.), Tsabazis, Roussopoulos, and Papadellis.
The witness was questioned for the participation of Boukouras in clashes between Golden Dawners and the police. The witness was asked how did he come upon the things he knows and the witness said that he read them in an article and saw a video which clearly shows that Boukouras was the leader. As for Germenis, the witness stated that he was the commander of an assault squad, which has committed crimes. As for the incident involving Skordeli, the witness said that no matter what had gone before, “nothing can justify a stabbing”. Defense counsel Tsabazi threatened the witness that it is possible that he will find himself a defendant if Skordeli is found innocent.

The witness was asked if he has ever been in contact with the Press Office of Golden Dawn, to get acquainted with their parliamentary work, and the witness answered negatively, saying that reporters must not be influenced by politicians. Concerning the phrase “I am a soldier of the party” and its use by members of New Democracy, the witness said that it is different, since this party doesn’t have an army.

The witness was shown photos of Roupakias etc. wearing swimming trunks. When asked if the people wearing swimming trunks can, in his opinion, belong to a criminal organization, the witness answered that “you don’t have to wear camo to belong to a criminal organization”. He was then asked to define “pogrom” and he said it was the instigation of a crowd of people to commit criminal acts.

The witness clarified that, beyond the incidents in Veranzerou Street, the rest he knows from the research he has conducted. He explained that he can’t answer if the media in general are always objective. The witness has conducted extensive journalistic research and his talks with various persons haven’t been all published. When asked to name them, the witness invoked his right of non-disclosure. Furthermore, the witness was asked to describe the content of his discussions with Psarras concerning the aforementioned memorandum of association, however the witness denied that he has met Psarras to discuss the matter. He testified that there are two: The 1980, authentic one, and the new one, which was deposited in the Supreme Court and discusses matters pertaining to the Memorandum.
The witness stated that he is a free reporter and that he is free to write whatever he wants. He didn’t go to Efimerida ton Syntakton to conduct research exclusively on the far-right, but that is something that came up later. Responding to relevant questions, the witness clarified that when he testified in the preliminary stage he had no knowledge of the case file, and that he is not in possession of it.

At this point the presiding judge adjourned for July 6th, 2017, in the Court of Appeals, where the examination of witness Ioannis Baskakis by the defense counsels is expected to continue.