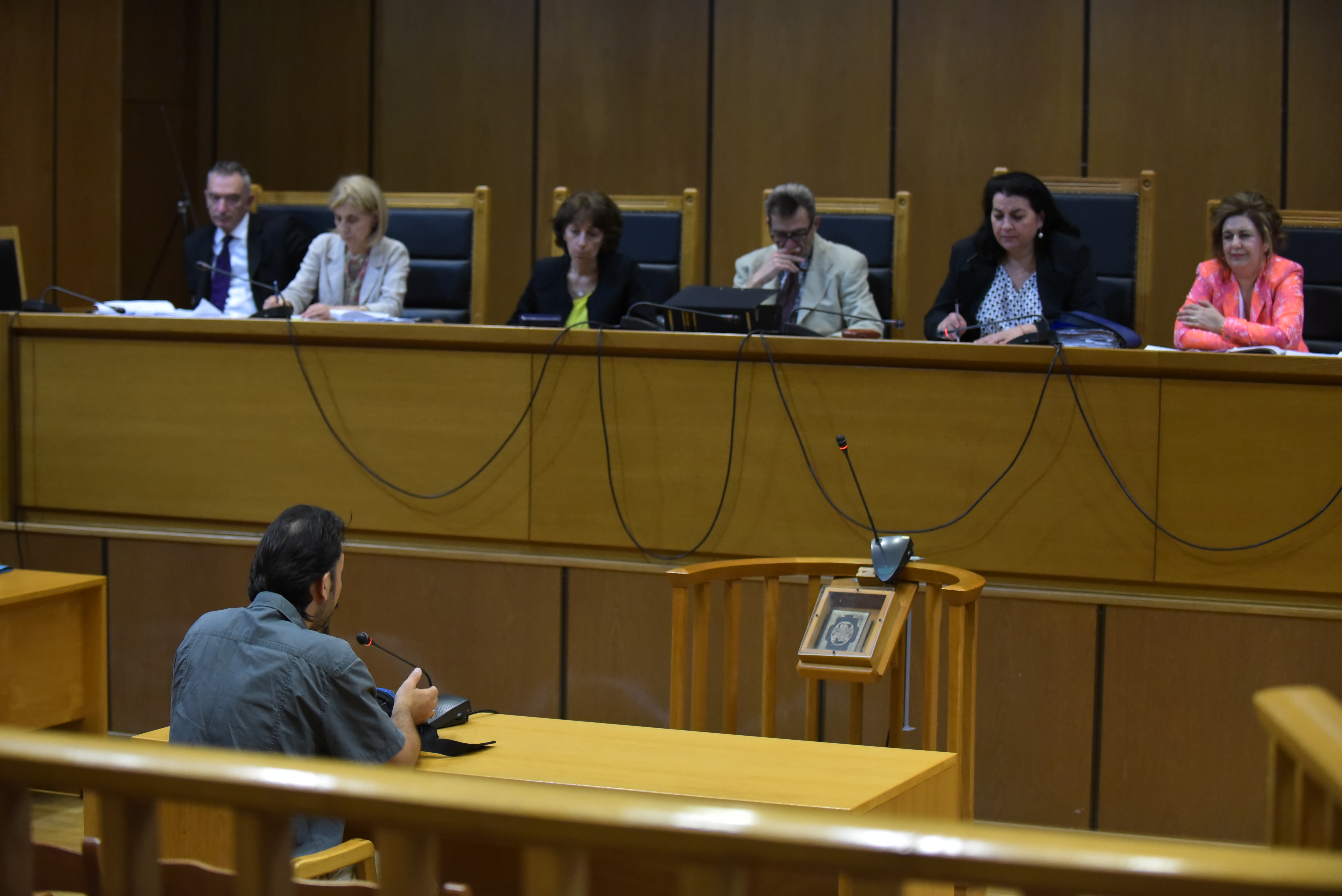 DAY 166: “OUR LIVING CONDITIONS CANNOT BE IMPROVED THROUGH INDIGNANT OR FASCIST MEANS”

The witness stated that she was a participant in the Racist Violence Recording Network [henceforth: RVRN] until 2014, up to which point she was following closely its activities. The RVRN was created by the UNHCR and the National Commission on Human Rights, and various NGOs participate as well. The witness explained that the recording of incidents of racial violence is done with the full name of the victim and the relevant data are in the RVRN’s archive, but they are not publicized in order to protect the victims. The RVRN does not record incidents of domestic or sexist violence, only racist violence. It is a recording network, and not a prosecution or investigative authority.

Responding to a relevant question the witness stated that she can’t describe one by one the 154 violent incidents that are mentioned in the RVRN’s report for 2012. She could, if she had at her disposal the RVRN archive. Furthermore, the witness stated that since the RVRN started its work and up to November 2013, Golden Dawn was responsible for 57 out of 349 incidents.

When asked if the RVRN would record Greek victims of racist violence, the witness stated that such a thing isn’t out of the question, but as far as she knows there haven’t been any racist attacks against Greeks in Greece, only abroad, where there are active groups similar to Golden Dawn.

The witness explained that the immigrant organizations that participate in the Immigrant Integration Council [henceforth: Council] of the Municipality of Athens, which are formally checked but not checked according to their objectives: that is, they are recognized by the court of first instance and have a memorandum of association. The objective of the Council is very specific: It promotes the integration of immigrants. The witness added that the participation of immigrants in the Council is by representative only and that she would never ask of a participant a certificate of compliance with the law, nor would she ever check their political beliefs.

As she said, the Councils are a requirement of the “Kallikratis” law that dealt with the municipalities. In the four years she was head of the Council, no group of citizens ever came to it to complain against people that were legally in the country. According to the law, the members of the Council are the legal representatives of immigrants, but not Greek citizens, since they vote and are represented in the municipal council. The Councils were provided for exactly because the immigrant long-term residents had nowhere to go to solve the problems they faced. Furthermore, any Greek citizen can turn to them to express his opinion.

When asked if there is a network that is recording poverty in the Municipality of Athens, the witness stated that there is no such network, but there is the Komvos Allillovoitheias [:Node of Solidarity]. She went on to explain that the municipal authorities possess many services, and many measures have been taken to bring relief the citizens of the city in ways that promote tolerance. These services are staffed with municipal employees and operate according to the decisions of the Municipal council, in which a representative of Golden Dawn participates with a right to vote. She added that the food handouts “Only for Greeks” are racist, because they separate and exclude a part of the population. In similar municipal services, the criteria for who can benefit are humanitarian and financial.

The witness referred to a Municipal resolution concerning racist violence, which was communicated to the Police. As she said, “All efforts up to then had been done in the dark, and they started being visible from 2011 onwards”. And she said that from the moment the RVRN recorded an incident of racist violence, the witness had no reason to dispute it. When asked whether she had testified in the preliminary stage as an individual and as a municipal councilor, she said that she testified under her capacity as municipal councilor an as head of the Council, but not as a lawyer.

The witness has not witnessed herself any incidents of racist violence. She cleared up once more that in order for an incident of violence to be labelled as racist, the assault must be unprovoked and to hinge on the victim’s difference from the norm. According to the data at our disposal, the incidents of violence decreased after 2013. Many of the incidents that were reported to the RVRN did not go to court, because the victims were afraid since they were in the country illegally.

According to the witness, when a citizen is wronged, he or she has many tools at his or her disposal to fight back, and the witness herself if she ever became a victim she would go to the police, believing that “The betterment of the conditions we live in cannot be effected with indignant or fascist ways”. According to the witness, this trial does not prosecute an ideology, but criminal activities.

The witness is a photojournalist. On July 4, 2014, he was outside the Court of Appeals along with other journalists to cover the transfer of Michaloliakos and Lagos from Korydallos Prison to the Court of Appeals. He was in the Court of Appeals courtyard when he heard stun grenades from the direction of Alexandras Avenue. He went with some of his colleagues along Loukareos St. where police officers were clashing with members of Golden Dawn. About 200 people were holding Golden Dawn banners and were throwing various objects. The police officers were trying to push them back using their batons and stun grenades.

The witness approached the gathered people along with two colleagues from the Athens News Agency, Symela Pantzartzi and Louiza Goulielmaki. Two minutes after they started photographing the riots, 7-10 people broke away from the rally and approached them, wearing similar clothes and one or two of them were wearing clothes with the Golden Dawn logo. At first they started shouting the slogan “Bastards-snitches-journalists”. Then they tried to break the camera of Pantzartzi. They didn’t succeed because it was secured with a strap from her neck, and after they shoved them, they started beating Pantzartzi and Goulielmaki. Pantzartzi was kicked in the pelvis and Goulielmaki was punched at the back of the head.

The witness believes it was two persons (of the 7-10) that attacked his colleagues. In this he diverged from his preliminary testimony. The one that hit Pantzartzi was about 45 years old, about 1,90 m. in height, was wearing a black shirt with the Golden Dawn logo, and didn’t have a shaved head.

The police officers were three feet away and could see what was happening, but they chose to do nothing. The witness and a couple of his colleagues took Pantzartzi and Goulielmaki a bit further away so that they could recover. After a while Pantzartzi asked to speak with the commanding officer of the police force and asked him why the policemen did not intervene.

According to the witness, the assailants did not say it explicitly, but he believes that they didn’t want the journalists to photograph their clashes with the police – probably because their activities could be prosecuted afterwards. According to the witness, the incidents started because the gathered crowd attempted to approach the van that was bringing Michaloliakos. The police officers pushed them back so as to clear the street and let the van approach the Court of Appeals. The faces of the gathered people were in plain view, they didn’t wear helmets or hoods, and there were women among their numbers. The witness saw Michos and Panagiotaros in the crowd, but he didn’t notice if they had a particular role or if they gave orders. The witness was not present during the assault on his colleague, Ioannis Kemmos.

The witness believes that it was only luck that he wasn’t a victim as well, and he was positive that his two colleagues did not provoke the gathered people in any way. He added that he has never attended any rallies, in which the gathered people attack journalists.

The witness was questioned by the civil action counsels Kabagiannis, Skarmeas and Vrettos.

The witness clarified that it was evident that the gathered people were members and supporters of Golden Dawn and that they didn’t include members of other parties. They gave him the impression that they functioned as a group. The witness said that after the incident he saw Kasidiaris on TV saying that there were no clashes with the police, that no journalists had been injured, and anyone who said so would be sued. As far as he knows, nothing of the sort happened.

The witness was examined in turn by defense counsels Dimitrakopoulos, Zografos, Kontovazenitis, Oplantzakis, Michalolias N., Roussopoulos, and Alexiadis. It must be noted that defense counsel Michalolias G. pointed out to the court that the witness was called to testify about incidents that happened after the events deliberated in the present trial.

The witness mentioned that apart from the aforementioned Golden Dawn rally, in the last 4-5 years he has been covering the Golden Dawn rallies to celebrate Imia. In these the photographers had not been impeded in their work. He also testified that only rarely has he heard the slogan “Bastards-snitches-journalists” in rallies. He thinks it was a threat that was realized.

The witness explained that it all happened in an instant: The riots lasted for 15 minutes in total. The witness and his colleagues approached the clashes protecting their ­-extremely expensive- equipment. He cleared up that the victims did not press charges. When asked how someone who engages in criminal activities and doesn’t want to be photographed in the act can defend himself, the witness answered that such a defense constitutes a crime. The witness couldn’t say if the clashes had been organized in advance or if they were spontaneous. According to him, the gathered people acted in unison.

The witness insisted that the colleagues that were attacked were chosen at random. On that day, not all journalists had gone to the place of the riots, the TV channels had remained in the Court of Appeals courtyard. The journalists that chose to cover the incidents were about 6-7 and did it to have a better view to do their work. So, they were closer and for this reason some of them were attacked.

The presiding judge adjourned for June 30h, 2017, at the Women’s Wing of the Korydallos Prison, when witness Marios Lolos is expected to testify.