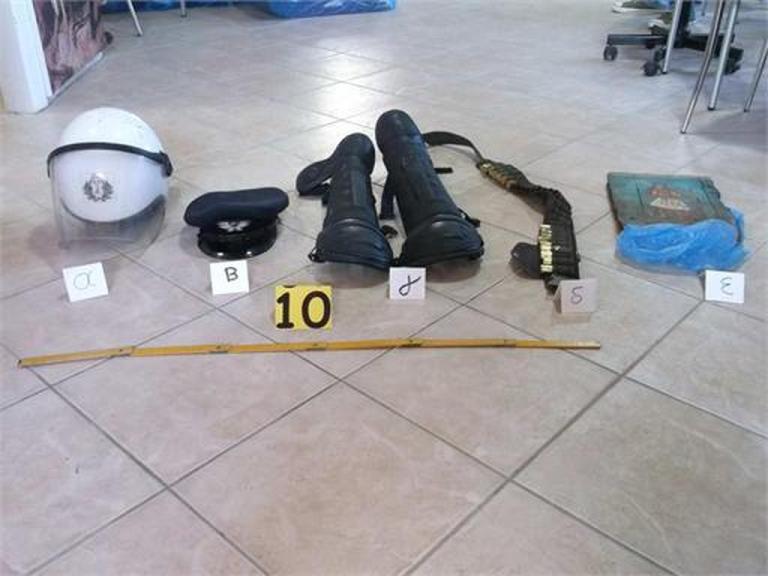 DAY 147: “GOLDEN DAWN METHODS ARE MORE SUITED TO A CRIMINAL GANG THAN A POLITICAL PARTY”

In this hearing the only witness to testify was Panagiotis Tsakanikas, since no other witnesses had been called.

Α. Examination of the witness by the members of the court

Responding to questions by the presiding judge the witness said that he has worked as a journalist for the past 23 years. He moderates a website called “agriniopress” and he has worked as a correspondent for Mega Channel and other local TV channels. Responding to a relevant question he said that in 2013 there had been many incidents between Golden Dawn and anarchists. In May 2013 there was an incident in the Agrinio Hospital, which involved MP Barbaroussis. The next day, as he was leaving his house, the witness heard shouts from the rock bar that is next door, which is an anarchist haunt. He later heard that Barbaroussis had participated in the incident along with one other person, information that he later published on his site. He received a phone call by Barbaroussis himself just half an hour later, who insulted and threatened the witness and his family, without leaving any room for dialogue. The witness reported the incident to the police because he was afraid, but didn’t want to press charges against the MP.

The witness reported another incident at the same bar, which is next door to his house, when he saw 7 or 8 people wearing helmets come out of 3 cars and trashing the place. From what he heard from the police, who identified the owners of some of the cars, it became clear that the assailants had been Golden Dawners. The witness referred to another attack on that same bar, with children’s explosives, which he heard with his own ears. Tsakanikas also said that on April 2014 his car was torched and completely destroyed, but the perpetrators were never found.

The witness, responding to questions by the members of the court said that he had been sued for defamation by Makris, a policeman in the personal guard of MP Barbaroussis. Specifically, he had published on his site that in a building owned by Makris, which had been leased from Golden Dawn for the offices of the local chapter, were found various objects, like clubs, axes, shin guards etc., and the article contained a photo of the policeman. The witness was arrested, released, and was later acquitted, even though Makris had in the meantime withdrawn the lawsuit. Makris, as the witness testified, had been elected in the Agrinio municipal council, and he was a policeman in Aitoliko before he was assigned in Barbaroussis personal guard. The witness does not know what is Makris status in the police today. Tsakanikas also referred to a text message he received from a leading member of Golden Dawn, Leonidas Stathopoulos, after he published an article on his site about the criminal character of Golden Dawn. The text message threatened him with legal action, but this particular leading member of Golden Dawn was killed in a car accident, so nothing came of the threats.

Concerning the activity and presence of Golden Dawn in Agrinio, the witness stated that it has lain dormant after the murder of Fyssas. Political in-fighting must have contributed, since Rigas, one of the leading members in Agrinio, seceded and founded his own party.

Responding to questions by the state prosecutor the witness said that he reported to the police the threatening phone call he received from Barbaroussis, because he was afraid, justly, he added, referring the incidents that followed and the arson of his car.

Responding to questions by the deputy state prosecutor, he said that he is afraid of Golden Dawn, because it contains in its ranks people that operate with a gang mentality. Referring to Makris he said that in Agrinio he is known for his activities, and before he went to Golden Dawn, he was in New Democracy.

Responding to questions by the civil action counsels, the witness testified that he knows that a group of people led by Barbaroussis and Makris made inspections in the street fruit market of Missolonghi and Gavalou.

He claimed that Barbaroussis’ behavior on the phone was not becoming to a member of parliament, but to a fascist and a thug, and in general Golden Dawn methods are more suited to a criminal gang than to a political party. He mentioned Barbaroussis, since he is a leading member and a Golden Dawn MP.

Responding to another question by the civil action counsels, the witness referred to clashes between Roma and residents in Aitoliko, during which a shanty and a car belonging to the Roma were burned, and later Barbaroussis had made a statement in the press.

Concerning the threats he received, he said that he had been targeted because of the articles he was publishing, since he annoyed them with his reporting, and went on to say that the targets of Golden Dawn are immigrants, minorities, and people with distinct racial characteristics. The witness said that the attacks had racist motives, and stated that he was certain that the leadership of Golden Dawn had full knowledge of the attacks.

Responding to further questions he said that it was rumored that during the attack on the bar Barbaroussis was holding a bat and in the same day he launched more attacks to other anarchist squats. In one of them he was carrying a gun. The witness was showed photographs and identified the findings of the police in the offices of Golden Dawn, such as helmets, caps, cartridges, and wooden clubs. He said that Makris had been found guilty for these findings and that after the verdict he was elected in the municipal council, something that proves that the leadership of Golden Dawn rewards his actions. The witness maintained that the groups that went to the street markets were acting in an organized manner, since they made interventions to other places at the same time. Finally, he said that the attack on his car happened a few days after he made his testimony to the investigative judge.

Responding to questions by the defense counsels, the witness said that he didn’t see Barbaroussis with his own eyes in “Dewars”, the bar next to his house, however the MP was identified by other people, who saw him from the surrounding balconies, among them the witness’s ex-wife. He supported that his articles about Golden Dawn were based on facts and did not express political beliefs.

He said that during the attack with small-scale explosives he couldn’t identify anyone because they were wearing helmets. Concerning the incident at the Missolonghi street fruit market he said that the videos that were leaked to the press came from the Ant1 TV channel and the website “Aichmi”, since there had been an informal tip that something would happen at that spot, and it wasn’t by chance that so many reporters happened to be there.

He said that the fear he feels towards Golden Dawners is greater because of the publicity the perpetrators enjoy as well as because of the ideology of Golden Dawn, which can’t be compared to the threats by anarchists.

He said that many incidents took place on the day of the opening of the local chapter of Golden Dawn, two squads of people wearing helmets had taken to the streets shouting “Blood, Honor, Golden Dawn” and performed marching exercises. The witness insisted on calling Golden Dawn a criminal organization, based on its modus operandi and its ideology.

He has been working as a journalist for 23 years and he has encountered many people who disagree with him, but he pointed out that Barbaroussis swore at him in a vile manner. The witness also said that he had dealt with Barbaroussis in previous years, when the MP requested that a street name be changed, because it was named after a person that had been in the Junta resistance. He stressed that he was understandably afraid by the way that Barbaroussis had addressed him, but that his fear didn’t interfere with his work. Responding to questions about the Roma shanty town, he claimed that Barbaroussis was fuelling the incidents and that he wasn’t contributing any solutions to the problem.