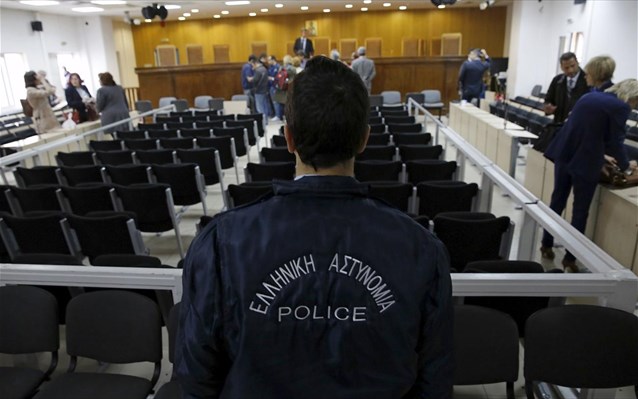 Conclusion of examination by the civil action counsels

The witness was questioned in turn by civil action counsels Malagaris, Tzellis, Papadopoulou, Tobatzoglou, and Zotos.

The witness said that the gathered Golden Dawners were those that wanted to approach the anarchist protesters. When Kasidiaris attempted to go to the opposite side -where the protesters were gathered-, the rest of the Golden Dawners followed his lead without him telling them anything. In this way he urged them to break the police barrier. There were unconcealed cameras at the scene, so Kasidiaris wasn’t ignorant of their existence. The witness couldn’t say why Kasidiaris behaved insultingly towards the police.

As the witness said, the police did not have to drive back the protesters. Due to the police barrier, the anarchists weren’t able to go near the gathered Golden Dawners. Even though there was no visual contact between the two groups, Kasidiaris demanded that the protesters be driven away. Kasidiaris seemed to be the leader of the gathered Golden Dawners, and the police officers explained to him that the security measures were adequate.

Examination of the witness by the defense counsels

The witness testified that the crowd of protesters (anarchists) numbered about 200 people. In his opinion, if the two groups had clashed, the anarchists would have used the helmets they were carrying. Even though the police force was comprised of only 35 people, the protesters would not have broken through the barrier, because the policemen were adequately outfitted.

Kasidiaris was behind the police buses, on the side of the hotel. Initially he didn’t try to break the police line, but eventually he did, and was driven back.

According to the witness, the Golden Dawners have never caused problems to the Iraklio police force, whereas the anarchists have, many times. When asked, the witness stated that there wasn’t any (official) notification on the part of the anarchists, to announce their protest march. Moreover, as far as he knows, in order for a protest to be illegal, the persons that participate must first commit criminal acts. Golden Dawn could have notified the police -at a level higher than that of the witness- for its event. One of the duties of the police officers was the protection of the Golden Dawn event. According to the witness, the police security measures probably would have been exactly the same, even if no protest march had taken place. As he said, the Golden Dawn event was held inside, so the police force was legally bound as to the extent of its protection.

According to the witness, the anarchist protesters were gathered about 500 meters away from the police buses. The gathered Golden Dawners seemed to agree with everything Kasidiaris said or did. The security measures by the police had been taken outside the hotel, in order to protect those inside the hotel. According to the witness, the protesters were simply chanting slogans, were not aggressive, and did not commit criminal acts.

The witness testified that Kasidiaris was not arrested because he was a MP and a political function of his party was in progress. In any other case, it was very likely that he would have been arrested for insubordination or resisting authority, because he tried to get through the police barrier.

Examination by the members of the court

The witness has been working in street fruit markets, is based in Missolonghi, and is the president of the Street Vendor Union of Missolonghi since 1991, when the union was founded. One of his duties is to allocate the spots where street vendors set up their stalls. Furthermore, when a street vendor doesn’t have a permit or refuses to show it to him, he calls the municipal police. The municipal police can’t spare the manpower, so the union has been authorized by the municipal authorities. According to the witness, there are about 60 street vendors in the greater area, they all know each other, and they all possess permits.

On September 8th, 2012, the witness was at his stall when he saw about 40 people wearing black clothes (some of them wore shirts emblazoned with the Golden Dawn logo) arrive at the street market. The witness didn’t know any of them. As he said, “they were a unified group, a set of people”. They weren’t interested in buying anything.

Near the witness were two colored street vendors, with their wares arranged on makeshift stalls made of cartons. They were poor people, without a permit, however the legal street vendors knew them and did not report them, since they never caused any problems. They were selling CDs and other knickknacks. The aforementioned group approached them and kicked over their makeshift stalls.

The colored street vendors were 5 to 8, and the witness could see two of them. There were no municipal police officers in his immediate vicinity. According to the witness, it was the group of men that overturned the stalls, and not Barbaroussis. The whole incident lasted about 10 seconds. Some colored people -not the ones next to him- might have been scared and ran off (something that the witness did not see with his own eyes but didn’t rule out), maybe because they had more merchandise or because of similar incidents in a street fruit market in Attica a few days before.

Examination of the witness by the civil action counsels

The witness testified that on September 8th, 2012, Barbaroussis approached him, and not a group of Golden Dawners. Civil action counsel Tzellis pointed out the difference between his preliminary testimony and the hearing testimony, when he had said that Barbaroussis “and his group” had approached him. Responding to a relevant question, the witness didn’t know whether Golden Dawn has elected an MP from the Aetolia-Acarnania prefecture, nor whether its members have committed criminal acts. He testified that a woman protested strongly the whole time the incident was taking place. When asked if his testimony was changed out of fear, the witness said no.

The witness testified that the two colored street vendors next to him hid their wares and returned to their “cartons” [their makeshift stalls], which were the only ones that were overturned.

The witness further reported that apart from the aforementioned woman some people -both vendors and customers- protested mildly about the incident because they were “aesthetically annoyed”.

When examined by civil action counsel Vrettos the witness stated that the Golden Dawn intervention struck fear in the ranks of illegal street vendors because “this might have been their belief. That they get their way only through violence”. Only the police was able to instill a similar fear. The group in question was moving “like a solid mass”. It is possible that Barbaroussis was not aware of the actions of the members of his party.

The witness was then examined by civil action counsel Sapountzakis, who asked him if he remembers better today than in previous testimonies about what happened -since he spoke about the “ceremonial presence of Mr. Barbaroussis”- and the witness answered that he can’t use the same words as then. In addition, he said that he never denied that the 40 men formed the group of Barbaroussis.

According to the witness, the incident was widely discussed in Missolonghi, as well as in Athens, where the witness was unloading his produce and was hearing discussions about it. The witness said that a similar incident in Athens was much more violent, since the assailants smashed stalls and cash registers.

Examination of the witness by the defense counsels

The witness was questioned in turn by defense counsels G. Michalolias, Roussopoulos, and Alexiadis.

The witness testified that some problems had been caused by the aggressive behavior of illegal street vendors, about which his colleagues had complained, since they couldn’t set up their stalls in their customary spots. The products sold by illegal street vendors are all illegal. According to the witness the street vendors in question don’t sell the same products as himself [:produce], but if they had and set up their stalls next to his, he would have called the police.

The presiding judge adjourned for April 11th, 2017, in the Women’s Wing of Korydallos Prison.