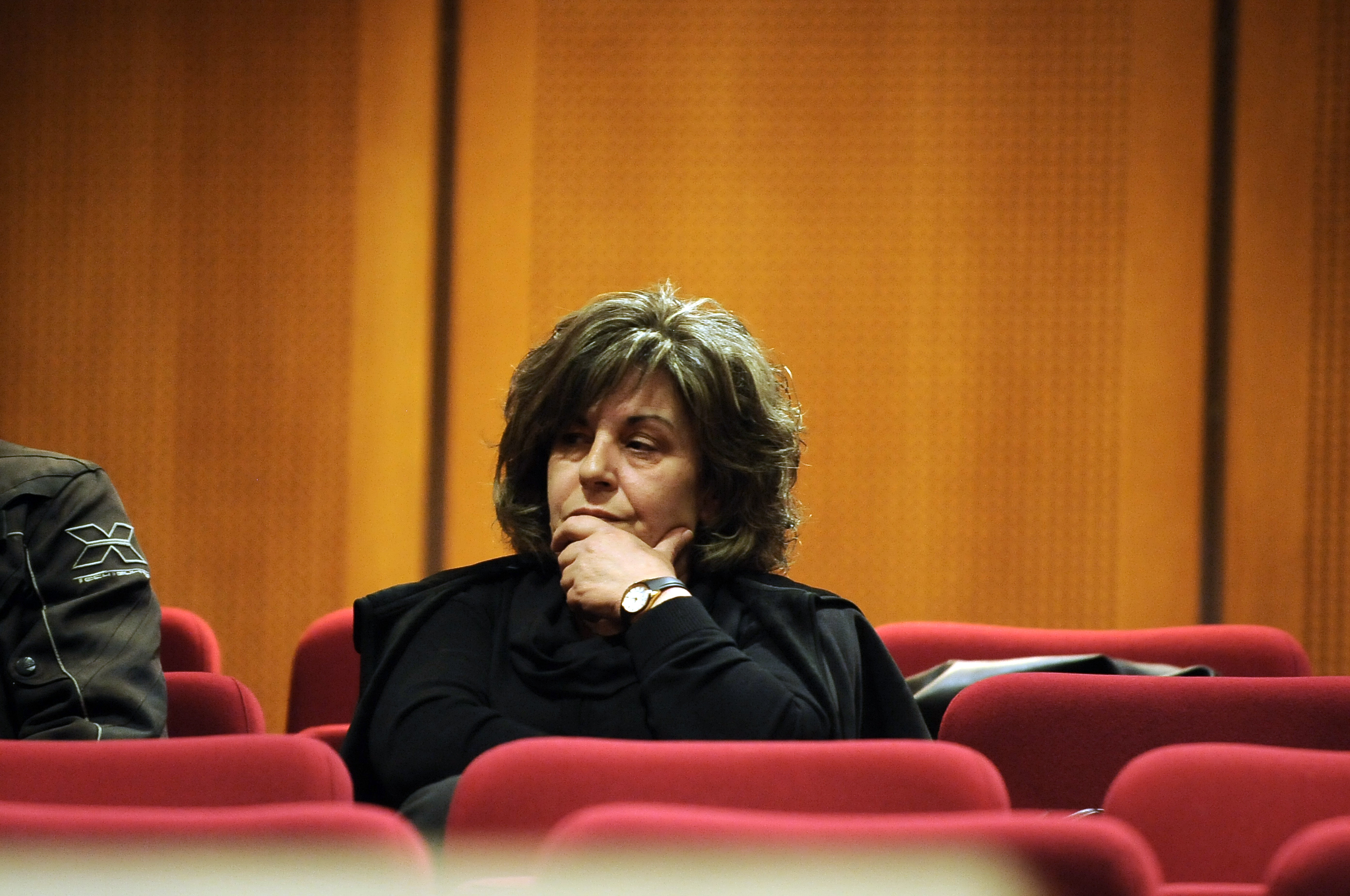 Responding to questions by defense counsels Tsagas, Oplantzakis, G. Michalolias, Roussopoulos, and Alexiadis, the witness testified that in her opinion the motive of the attack was that Apostolopoulos had been annoyed by what Demertzidis has said, which was relayed to him by Kambioti. Demertzidis was telling her not to get mixed up with the Golden Dawner and had written “ANTIFA” on her desk. She also said that another motive was hatred for everything that was different. She added that there had been a rumor or joke that Demertzidis was an anarchist, but she said she believed that the student that was attacked wasn’t an anarchist, but an antifascist.

Responding to another question about the slogans that were frequently written on the walls of the school, the witness said that she went early to school to erase slogans such as “BLOOD HONOR GOLDEN DAWN”, which, as she said, has connotations alluding to race purity and refers to the Nuremberg Trials. Responding to a question about whether Golden Dawn is a legitimate political party and if its leader was democratically elected, the witness stated that Hitler was also democratically elected.

She also said that initially she didn’t report the slogans and the Golden Dawners that were frequenting the little park, or the pamphlets they were passing around, as well as other incidents, because at the time she didn’t think it was important. The first time she reported them, the time they burned an ELME banner with lyrics by Savvopoulos on it, was in this trial. She also stated that she first heard from eyewitnesses what had transpired, and from Christiana, who was also an eyewitness, that she saw two people run and get into a Smart, the car of Apostolopoulos, and then she gave her first testimony.

The defense counsels then asked the witness to consider the pressure that Kambioti must have been under from the stance of her classmates, who might have told her that she was involved with a fascist and that she herself was a fascist. The witness stated that before the incident took place Kambioti had never come to complain about the behavior of her classmates and added that differences cannot be solved with knives. Responding to a question by defense counsel Alexiadis concerning whether it is objectionable to be in a relationship with a fascist, the witness stated that more objectionable still are the lies that Kambioti said, especially after the incident. She also said that Kambioti cried and pretended, and her telephone records show that at the very least she knew of Apostolopoulos’ intentions.

The witness testified, and the members of the court interrupted with questions, that his son was a classmate of A. Kambioti. His son was not politically active but he and other classmates were telling Kambioti to not get involved with Golden Dawners, because they knew she was in a relationship with Apostolopoulos. The witness’s son, Foivos, who was sitting behind her in class, had erased a fascist slogan she had written on her desk and had replaced it with the word ANTIFA.

The witness received a phone call by the principal of the school saying that his son had been attacked by persons not connected to the school and in the hospital he saw his son’s nose hanging by a little piece of skin. The only thing his son said before going into surgery was that he was attacked by fascist Golden Dawners. At the police station he learned that Apostolopoulos had been accused of carrying out the attack. His son told him after he got out of surgery that the boyfriend of Kambioti, a Golden Dawner, had attacked him. He hadn’t seen him before and they hadn’t exchanged one word, and he identified Apostolopoulos as his attacker. The witness went on to say that his son was attacked from behind by two people with a knife, while he was listening to music on his earphones.

Responding to a question about the motive of the attack, the witness stated that the motive was to scare the whole of the school community. He also said that Apostolopoulos was a well-known Golden Dawner and thug. The telephone records showed, as the witness claimed, that the school’s PhysEd instructor was asking, through Kambioti, from Apostolopoulos a paid “favor” that had something to do with the principal.

Responding to questions by the deputy state prosecutor concerning Golden Dawn, the witness said that he knows of the attack carried out by Golden Dawn when they threw homemade bombs somewhere in Nea Smyrni and about a Golden Dawn attack on an immigrant. He added that he didn’t want to get involved with a violent political party as Golden Dawn, without the proper evidence. That’s why he didn’t mention Golden Dawn in his first testimony. Finally he said that the assault squads are staffed by trained commandos, persons, that is, with military training.

Responding to questions by civil action counsels Theodoropoulos, Vrettos, Stratis, Zafeiriou, Papadopoulou, Tzellis, Kabagiannis, and Zotos, the witness testified that after the incident his family was the target of many threats and intimidation tactics. They received anonymous calls with threats such as “We know where he is, we’ll bring you his head”. He also said that they drew swastikas on their doorbell in the apartment block entrance. Responding to another question he stated that most likely the Golden Dawn perpetrators didn’t want to face charges and go on trial, and that’s why they started with the threats a few days after the attack. As he said, fear is an all-conquering emotion. Their appearance was terrifying, especially to the kids. He said that Apostolopoulos is over 6’ 2’’ and weighs about 200 pounds. The witness went on to say that Golden Dawn attacks immigrants as well as other people and that it imposes its political will through violence and scare tactics, and its ideology is fascist, Nazi. His certainty derives first from his own self, since he has been harmed by Golden Dawn, but also from many other incidents he has witnessed. During the period in question Golden Dawn was extroverted, they opened more and more offices, and advertised the things they did, for example impersonating the authorities in the fruit market. According to the witness these actions caused fear to the average citizen, however the state hadn’t taken the necessary precautions to suppress the phenomenon. The witness went on to say that from September 2012 Golden Dawn began showing up in school, inside and outside the school grounds, and Golden Dawners were intimidating kids in the small park across the street from the school. More specifically, the witness referred to two more incidents of students that had been threatened or intimidated by particular persons that were regularly coming to hang out outside the school, and he also said that the parents hadn’t been notified of these matters before his son was attacked.

Responding to questions by the defense counsels the witness testified that Apostolopoulos and Kambioti were members of Golden Dawn and this was indicated by the text messages they received from Golden Dawn about events on the subject of Imia etc. He also said that Kambioti wasn’t pressured by her classmates who were telling her to be wary of Golden Dawn, and also that she herself has never claimed such a thing. Also, Kambioti, even after the incident, continued to attend the same school without any problems whatsoever. He also said that Golden Dawn rewards those that carry out violent attacks, and that Chatzipavlis, the person that stabbed his son, was taking photos right after the incident, holding the knife proudly. This shows that he was ideologically safe after the stabbing. He also said that he has a very close relationship with his son, even though they don’t live in the same house, that they speak on the phone every day and that they meet regularly, but he had never said anything about Kambioti, neither for the Golden Dawners around the school. Responding to a question about why a party or a group can be responsible if the perpetrator of an attack is a follower of a member of this party, the witness answered that we’re not talking about just any party but about Golden Dawn, that the three assailants were Golden Dawners and that on the doorbell they didn’t write AEK [:a popular soccer club], but Golden Dawn.