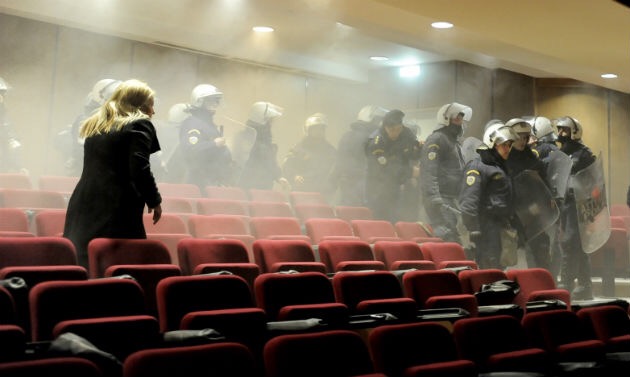 Judges hearing an ongoing case against the neo-Nazi Golden Dawn party had to leave the courtroom on Tuesday after scuffles broke out between the plaintiffs’ and defendants’ supporters.
Tuesday’s hearing related to an attack by suspected Golden Dawn members on a branch of Antipnoia in June 2008, in which two members of the anarchist group were stabbed. Tension arose after witnesses for Antipnoia asked for supporters gathered outside the court to be allowed entry.
They objected when police refused the request, saying that dozens of GD supporters had been allowed in. The incident sparked a heated exchange of words between the two sides, with police stepping in when they started to launch water bottles and other projectiles at each other.
The judges walked out of the courtroom after adjourning the hearing until Thursday. Proceedings are to resume at a makeshift courtroom at Korydallos Prison instead of the Athens Appeals Court.
Meanwhile on Tuesday, riot police denied allegations that one of their officers was equipped with a video camera during the incident.
Earlier, a photograph that emerged on social media allegedly showed a police officer with a small camera attached to his uniform. Police said that an inspection found the device to be a power bank used to charge a mobile phone and bluetooth headset.