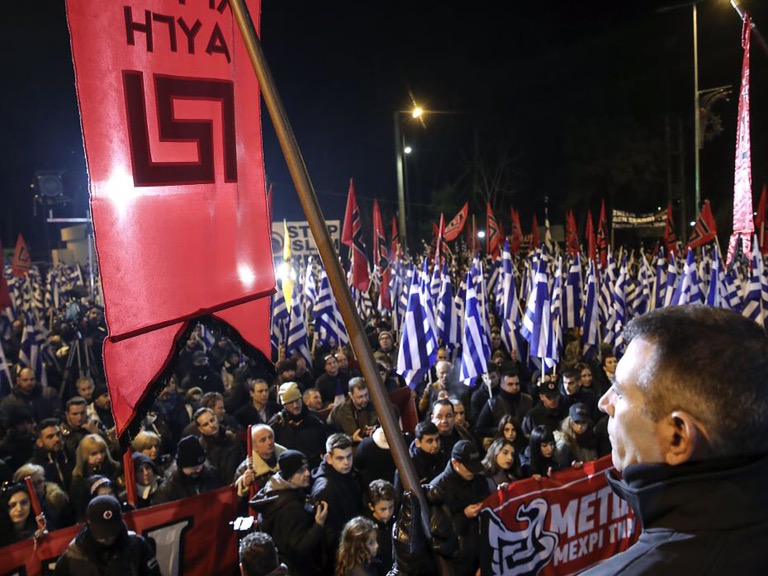 Greece’s most prominent neo-Nazi movement says it has found a new surge in support following Donald Trump’s election as US President, and that his ban on travellers from some Muslim-majority countries “validates” the group’s far-right views.

Stirring a hardline, nationalistic element in Greece, the new President’s controversial immigration ban has sent thousands of supporters of the far-right Golden Dawn party, which represents about 10 per cent of the popular vote and is the country’s third-largest party, onto the streets. They have staged torchlight parades and called for copycat bans for Greece, which is still struggling to cope with a year-long refugee crisis.
“Trump’s policies have given us a new wind of support,” Elias Panagiotaros, a leading light of the far-right party and an MP in Athens, told The Independent. “It’s validating and reinforcing our nationalistic and patriotic policies – policies that we have been advocating for years.

“We should follow Trump’s beat,” he said. “We shouldn’t leave Greece like an open field for migrants to come and go as they want. We should reclaim our country and our interests and put them first, just like Trump.”
Golden Dawn supporters marched through the streets of Athens at the weekend, ostensibly to commemorate the deaths of three Greek military officers in a helicopter crash near the Imia islets, at the Greek-Turkish sea border, on 31 January 1996.
Waving torches and the party’s red-and-black flag – a colour scheme closely resembling that of Hitler’s Nazi party – the group chanted anti-Turkish and anti-migrant slogans and its members spoke out against the “tens of thousands of illegal immigrants in our country”.

Police said about 800 people were involved in the Golden Dawn march. A counter-protest organised by Greek anti-fascists also took place in another part of the city at the time, although authorities said they were kept apart and there were no clashes.
The march – and its heated rhetoric – signal an eerie resurgence for Golden Dawn, a once fringe and negligible political force that emerged from obscurity three years ago to gain national representation in Greece’s 300-seat parliament.
Feeding on the country’s financial crisis and popular resentment of traditional mainstream parties, the neo-Nazi grouping, regarded as being among the most dangerous reactionaries in Europe, saw its support rise before swooning amid allegations of it orchestrated the killings of leftist hip-hop artists in Athens two years ago.
“Since then,” Mr Panagiotaros said, “we’ve become grounded.” He said the group nonetheless remained “vigilant” and “silent”, watching on the sidelines of a lingering refugee crisis that has seen more than a million undocumented migrants pass through Greece on their way to seeking asylum in other parts of Europe, at times unsettling the country and unnerving its people.

Although 62,000 migrants remain trapped in the country because of a flurry of border closures in the Balkans last year, Greece has seen only scarce streaks of racist violence. Still, anti-immigrant feeling is on the rise, and that, says Mr Panagiotaros “will pick up as Trump presses ahead with anti-immigration policies.”
“It’s simple,” the Golden Dawn politician said. “Trump is the planet’s keeper. He’s the president of the world’s superpower, and whether you like him or not, his policies are now validating beliefs and concerns across the globe.”