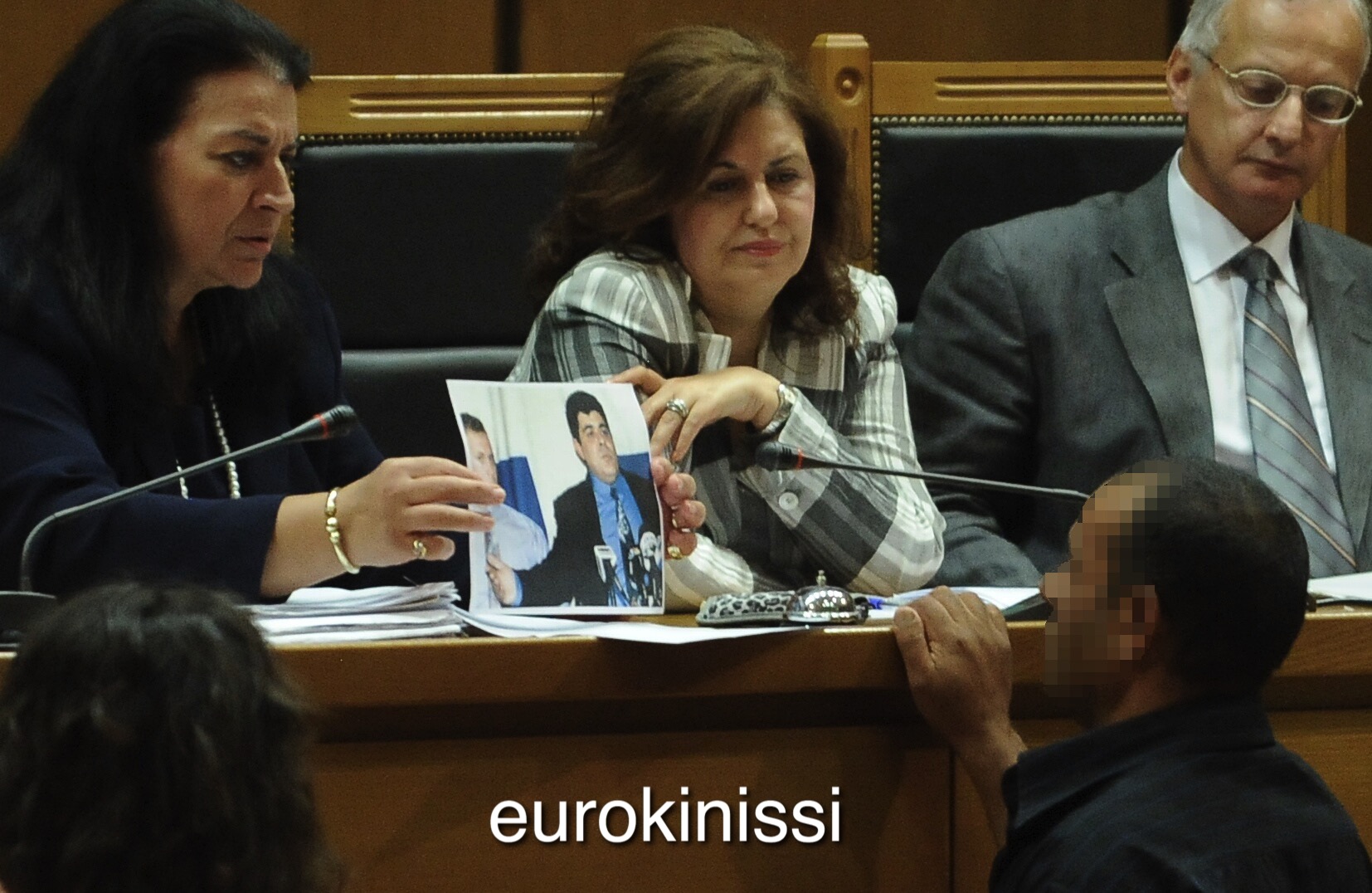 The courtroom remains open to the public upon presentation of a state ID card, which is retained by court authorities for the duration of the session. There were journalists and a number of spectators present.

Present at the hearing were four (4) defendants: M. Evgenikos, Th. Marias, A. Pantazis, and K. Papadopoulos.

1. Examination of the witness by the court

The witness described the attack that took place at his residence, placing emphasis on the access points to the roof, where his brother was during the incident. The witness went on to mention the damage to his professional vehicles and the use of the fire extinguisher, whose dust was intended to lower his and his family’s visibility. At the time of the assailants’ attack -a group of about fifteen people- the witness took a good look of the person that tried to open the window. Responding to a question by the presiding judge the witness identified A. Pantazis among the defendants present at the hearing. The witness heard Abouzid call for help and found him seriously wounded on the roof. As he reported, his brother remained hospitalized for fifteen days, and after his discharge his capacity for work has been substantially lessened. The witness and his family moved to another house immediately after the incident. He stated that he was terrified because of the incident, and was too afraid to even testify (at the preliminary stage) to the authorities concerning the attack. It was at the hospital that he was informed that the persons that had attacked him and his family were members of Golden Dawn, and, as he testified at the hearing, “I said to myself I saw one guy, well I’ll say I saw no one, because I don’t want to get in trouble again”. That’s why in his first testimony he stated that he couldn’t identify the person he had noted at the time of the attack, while he identified him before the court. Responding to a question by the assistant prosecutor, why did the attackers damaged the cars, since they had no differences with their business, the witness said “they wanted to kill me, would they leave the car unharmed?”

2 Examination of the witness by the civil action counsels

The witness was examined by the civil action counsels Zotos, Papadakis, Skarmeas, Kabagiannis, Kougiatsou, Papadopoulou, Tzelis, Malagaris, Stratis, and Theodoropoulos. The witness was shown photographs of the house where the attack took place, as well as photographs depicting the wounded Abouzid. Building on his examination by the court, the witness gave clarifications concerning the access to his house, as well as the attack that took place, also stating that there was a plan “like in a war”. He went on to say that the attackers were all dressed in black, except one that was wearing white clothes, and were carrying wooden and steel clubs and bats. He stated that the fire extinguisher was used to force the tenants to come out of the house, since they wouldn’t be able to see or to breathe. As the witness said “I wouldn’t have gone out, no matter what they threw inside”. At the end, because the victims were shouting and because the assailants feared arrest, after the attack on Abouzid and the damage they did on the windows and cars etc., they departed without murdering them – something that would have surely happened if the victims had left the house. The witness then saw outside the house [the next witness to testify] K. Tatsiopoulos. As the witness said, his brother had multiple head wounds (at the jaw, the lips, the brow, the temple), and scratches on the belly, legs, and chest areas. As for his brother’s present condition, the witness stated that “he can eat, but can’t chew hard food. At work he’s half a man. […] he didn’t come back a normal person.” Civil action counsel Papadakis mentioned that the court should concern itself as to the reasons why a forensic investigation wasn’t carried out, despite the fact that the order had been given. The witness mentioned other criminal offenses that have been committed against immigrants by members of Golden Dawn that he had been informed of (the murder of Sahzat Lukman, arson at the Pakistani mosque in Omonia Sq., damages to the mosque near the Rendis market etc.) as well as the attack on Pavlos Fyssas. The witness offered his condolences to the mother of the deceased.  The witness went on to state that they had no differences with anyone, for the 11 years that he and his family have been residents of Perama. He did report that a few days before the incident his brother had received a threatening phone call. As for the motives of the attack against colored people, the witness explained it thus: “The Greeks couldn’t find work, so they [:Golden Dawn], where targeting them to force them to leave, to gather votes, and govern the country”. He also said “we came here to not be hungry anymore, we didn’t come here to fight, if something happens to me or my family, Golden Dawn will be to blame”.

3.Cross-examination of the witness by the defense counsels

The witness was cross-examined by the defense counsels Glykas and Papadellis. Contrary to the proceedings up to that point, during which the court and civil action counsels questioned the witness directly -since he seemed to possess good control and comprehension of the Greek language- the aforementioned defense counsels questioned the witness through the interpreter that was present, using the third person singular. The witness once more clarified details about the attack that took place at his house. He stressed that he couldn’t see well because of the dust from the fire extinguisher. He made it clear, though, that he identified a certain individual [:Pantazis] and stated that he hadn’t been clear on the matter during the preliminary investigation, because he was afraid. That’s why he didn’t testify in the investigative stage.

The witness was insistently questioned by defense counsel Glykas as to whether he signed a false statement, since he had stated both that he couldn’t see well due to the dust from the fire extinguisher, and that he could identify one of the attackers. The witness insisted that he testified everything that he saw. He went on to mention that the assailants were members of Golden Dawn. The defense counsels asked the witness why he didn’t testify before an investigating judge. During questioning by defense counsel Glykas the witness seemed to have trouble distinguishing between the testimony given to a policeman, and the testimony given before an investigating judge. Responding to the question why he didn’t testify before an investigating judge, the witness answered that he was afraid. Even in the hospital, he said, “he was afraid, and if he could have hid, and not said a word, he would have done so”.

At this point the hearing was adjourned for Friday, September 23rd, 2016, when Konstantinos Tatsiopoulos will be called to the witness stand, an eyewitness for the case of the Egyptian fishermen.