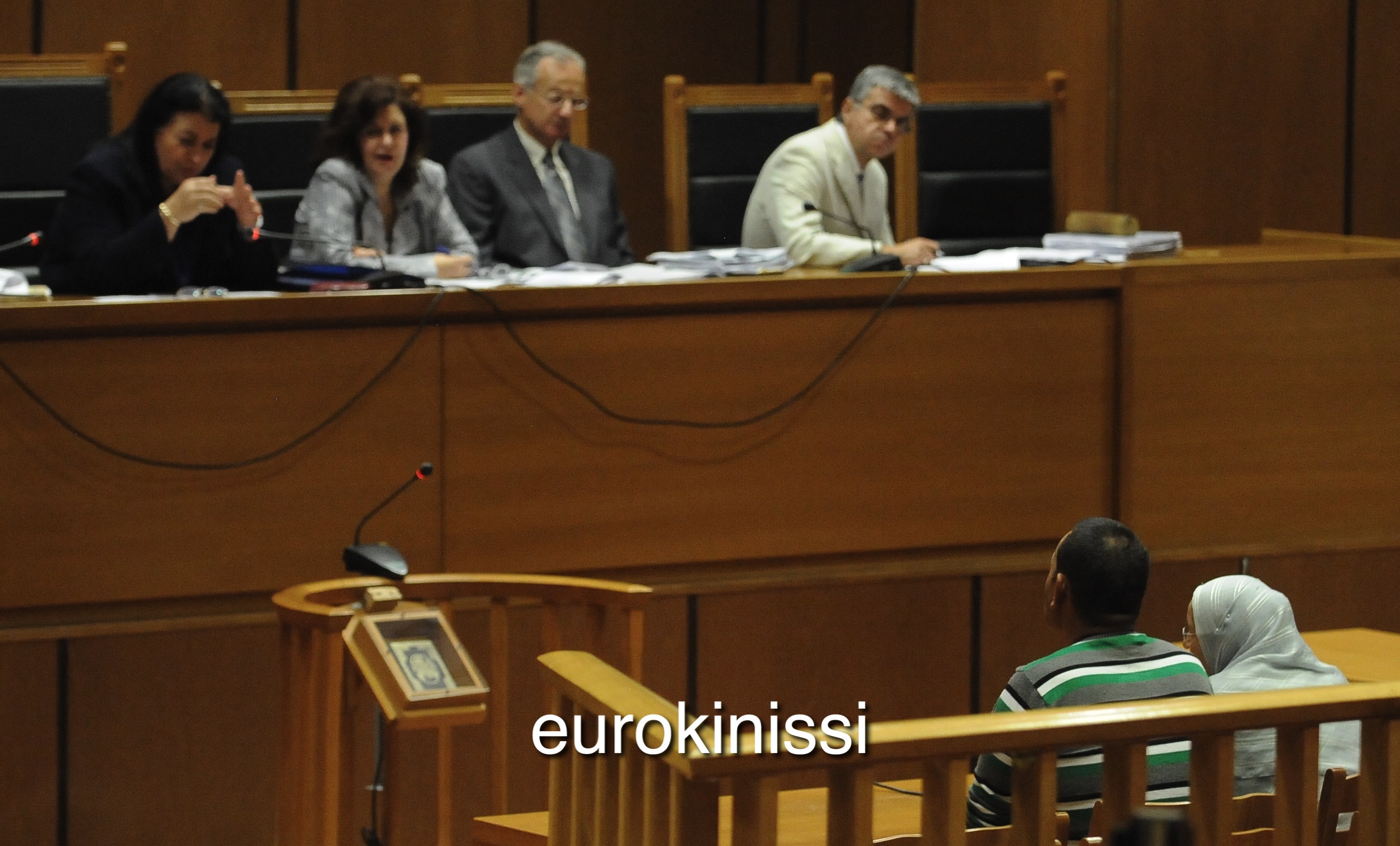 The courtroom remains open to the public upon presentation of a state ID card, which is retained by court authorities for the duration of the session. There were journalists present, as well as a number of spectators (among them K. Kouneva, Member of the European Parliament).

Present at the hearing were four (4) defendants: M. Evgenikos, Th. Marias, A. Pantazis, and K. Papadopoulos.

Cross-examination of the witness by civil action counsel Papadakis.

The witness stated that he is a national of Egypt and that he is a resident of Greece for the last 22 years. He went on to say that he is a fisherman by profession; that he operates a fishmonger’s in Perama; and that his residence is in Keratsini. Responding to a relevant question he said that he is not related by blood to Abouzid Embarak. He stated that he has never had a problem with anyone, financial or otherwise. On the night of June 12th he was in Keratsini with his two brothers and two minors, and they were all sleeping in the two rooms of the house. At about 03:10 he suddenly woke up from the noise of glass breaking, which proved to be one of the windows of the house, the lower one, situated at a height of 1,00-1,20 m. from the ground. The witness stated that he went to see what was going on from another, higher window, just to be safe, and that he saw in front of him a group of ten people. The persons in the group were attacking the house and for this purpose each was holding a steel or wooden club. There was enough light and the witness saw about 15 attackers right outside his house, as well as a few people further away, next to the vehicles. He noticed 3-4 of the attackers directly under the window. When the witness was called to the police station to identify some of the defendants, he identified 3 persons with specific characteristics. All of them were wearing black shirts, some of them emblazoned with the words “Golden Dawn”. The attackers tried to gain access to the house and the witness with his brothers began shouting for help. He remembered one of them saying “Let me show you what Golden Dawn will do to you”. The witness identified the voice of this person when he was called to identify the perpetrators in the police station. The incident lasted for about 15-20 minutes. The attackers had filled the house with fire extinguisher dust, but the witness and the rest of the people inside the house couldn’t get out because “we knew that if we went out we would be murdered”. The attackers caused damage to the victims’ automobiles.

None of the neighbors came to their help, even though they were aware of the incident. The attackers finally retreated because (they thought that) they had beaten to death someone and their presence had been noticed by the neighborhood. They had parked their vehicles in a nearby street. After the incident the witness received threatening telephone calls – something that had never happened in the past. The witness then climbed on the roof of the house with his brother Hamed Saad, where they found Abouzide drenched in blood, saying “I’m gonna die, get me to a hospital, I’m gonna die”. At the time the witness believed that Abouzide would die, given the condition he was in. A neighbor named “Kostas” came and helped them call the police which arrived after 10-15 minutes. The wounded man was transported by ambulance to the hospital, and the witness went with his brother to the Perama Police Station to testify. From there they were transferred to the Keratsini Police Station to identify some of the suspects concerning the incident.

The witness then identified three persons and proceeded to describe before the court their specific actions. The witness testified that two days after the incident he received an anonymous phone call offering to compensate the victims, but the man never called again. At some point someone advised him not to testify, to say that he remembers nothing in connection with the incident, however the witness cannot recall who it was. Abouzide had been sleeping every night on the roof for about a week before the attack, and on the night of the attack. He could easily be seen sleeping from the street, and the roof was readily accessible even from outside the house. The witness stated that he was aware at the time of a Party whose members were attacking immigrants. He testified that he never had any problems with members of Golden Dawn, except for a fisherman who was staring at him and his colleagues “in a bad way” at the fish auction.

The Court asked of the witness to identify from the four defendants present the perpetrators of the attack against his person and his compatriots. The civil action counsels Papadakis and Kabagiannis motioned for a postponement of the identification, in order for the fifth defendant, Agriogiannis, to be present. The defense counsels Karydomatis and Velentza asked that the defendants be presented for identification in a group of random persons to ensure the reliability of the proceedings, and also supported that the identification is invalid, since the witness testified that he doesn’t remember the perpetrators. The Court rejected the motion by the defense, however postponed the identification until the next hearing, so that the aforementioned defendant be present.

The District Attorney then asked the witness what he knew about the Golden Dawn event with the MP Lagos, which had taken place prior to the attack, since he had mentioned it in one of his testimonies. The witness recalled that the aforementioned MP had stated that “the fishermen do as they please, from now on they will answer to Golden Dawn”. The witness clarified that ten persons were directly in front of the house and the rest were standing in the street. Responding to a question by the Assistant DA, why would Golden Dawn attack him and the rest of the people in his house, the witness answered “because I am Muslim, and dark-skinned, and they want to expel all foreigners from Greece. That’s what I heard.”

In response to more questions by civil action counsel Papadakis, the witness described in more detail the characteristics of two of the attackers, as well as their actions during the incident. He said that for the aforementioned two persons he was 100% certain of their identity, as for the other four, he was 80% certain. The neighbors that came to his house right after the attack told him they, too, had seen that the attackers were members of Golden Dawn. The witness stated that he had mentioned Golden Dawn in the testimony he gave in the police Station, however his claim had not been included in his testimony. The witness explained that he has difficulty with some Greek words. [Note: The witness’s difficulty with the Greek language was evident, and an interpreter had been provided to help -as much as possible- in the proceedings]. The witness informed the court he had moved after the incident, although he did keep his shop at the same venue, because he saw that many people supported him.

Civil action counsel Zotos proceeded to examine the witness. The witness described in great detail his house, the access to the roof, and the events that transpired during the attack in question. He stated that he woke up from the shouts he heard from the roof and from the sound of the breaking window on the ground floor, where he was sleeping. He was shown a number of photographs, which he used to give clarifications. Among other things, he stated for the first time that the metal bars that were in place on the threshold had been removed that night by the attackers. Responding to a relevant question, the witness described the woman who participated in the attack.

Civil action counsel Kabagiannis asked the witness to describe the person he had mentioned as “leader” of the attackers, and the reasons for arriving at this conclusion. The witness answered that this particular person, who was shouting loudly and hitting with force, was giving orders to the rest of the attackers. The witness went on to describe Abouzide’s wounds and the impact they had on his work. As he said, “he can’t do hard work anymore. We do hard work. He is half a man.” Responding to a question regarding the aforementioned statement by Lagos, defense counsel Roussopoulos reacted to the isolation of the sentence in question, and asked for the whole of his speech to be heard. When his request was rejected he stated that he is leaving the courtroom. The witness then testified that he has social security and that he pays his taxes. He mentioned the explanation given by the Pakistanis who have fallen victims of attack by Golden Dawn, that “they attack us to make us leave”.

Civil action counsel Skarmeas proceeded to examine the witness. The witness gave some clarifications about the attack, and especially the “leader” of the group. The witness reported that 1-2 days before the attack he had received a threatening phone call by an unknown person. As he said, in 2016 an unknown person tried 2-3 times to meet with him about the incident, but the meeting never took place. Regarding the incident, he was threatened once, a week after the attack. He was shown a number of photographs, which he used to give clarifications.

At this point the hearing was adjourned for Tuesday, October 18th, 2016, when the witness’s cross-examination by the civil action counsels will continue.