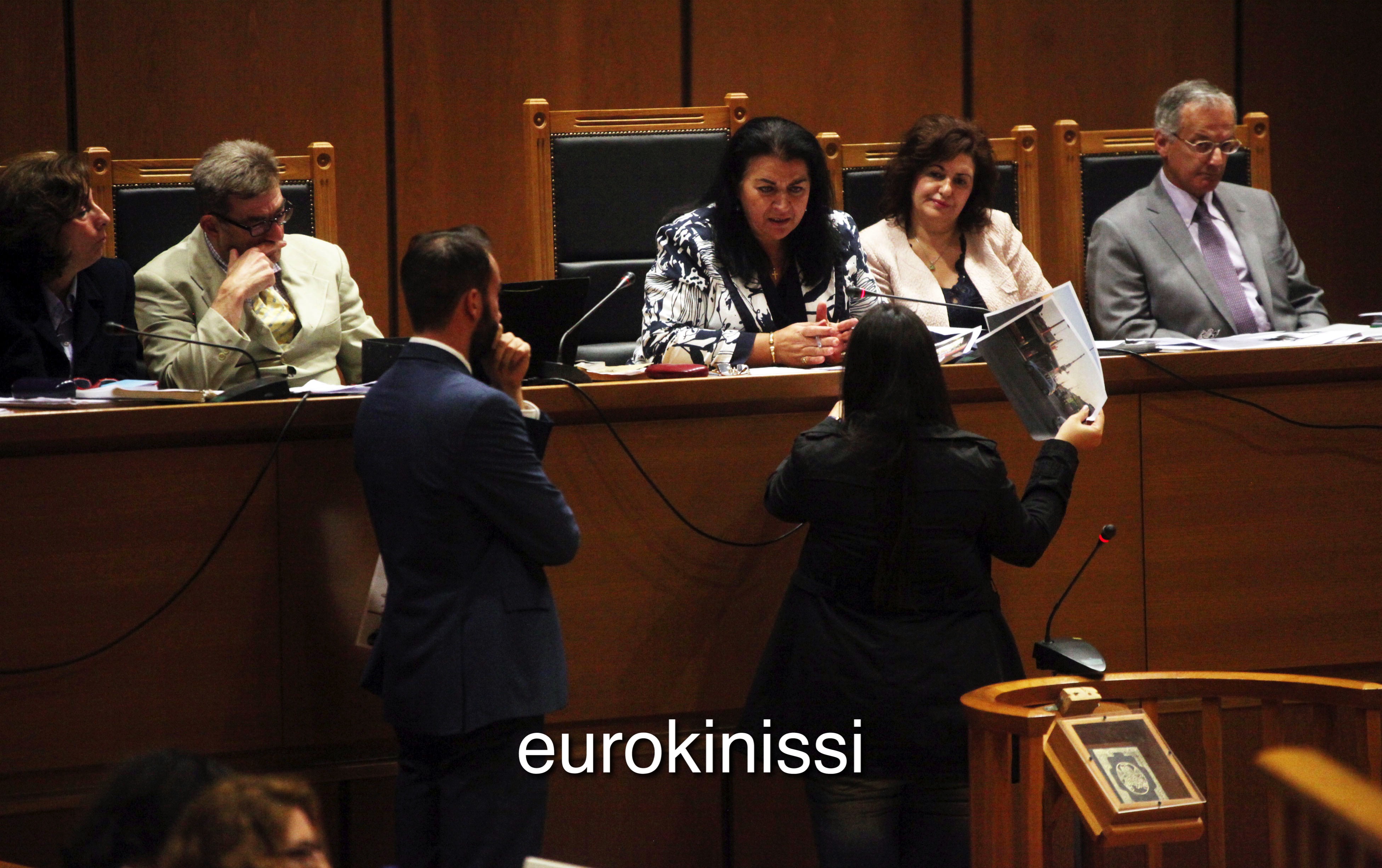 Present at the hearing were four (4) of the five defendants for the Egyptian fishermen case: M. Evgenikos, Th. Marias, A. Pantazis, and K. Papadopoulos. Defendant Agriogiannis was absent, because he couldn’t be absent from work. Forty-four (44) defendants were recorded as absent, while the rest were represented by their counsels.

Civil action counsel Zotos motioned for defendant Agriogiannis to be brought before the court by any means, so that the witness can proceed with the identification, however the presiding judge rejected the motion.

The hearing was marked by tensions and was recessed, since the witness, who was pregnant, felt indisposed during cross-examination by the civil action counsels and was taken away by ambulance, while earlier during the proceedings, amid rising tensions, the judges were forced to call for a short recess.

At the end of the hearing the District Attorney amended the prospective witness list and called witness Diamantopoulos for the hearing of October 18th, who was working at Cafe Beat on the evening of the attack.

The witness repeated that they stopped the suspects in Schisto Avenue and led them to the Keratsini Police Station, where they turned them over to the duty officer. After 1-1,5 hours they received the signal to transfer the accused. Finally they transferred to GADA [:Attica General Police Directorate] only the Café Beat employee who was working the shift on the night in question, since the accused had claimed to have been there earlier. The policemen didn’t take the woman employee, because she was working the morning shift, and there were no customers in the cafe at that time. The employee told them he knew the people from Perama, however he did not ask for explanations concerning his arrest. However, the signal they had received did not mention the number of employees to be brought in for questioning. She repeated that there’s another café with the same name, which they didn’t visit, while by her own calculations the distance from the café to the spot they stopped the accused persons was about 5 km, and that a motorbike would take a median time of 7 to 10 minutes to get there. She also mentioned that the Kazania site is nearer to the spot of arrest than the Café Beat.

Responding to questions by the District Attorney the witness stated that she remembered that most of the suspects were wearing black, which puzzled her.  She didn’t remember anyone having the role of the leader, although Pantazis was the one that did most of the talking and asked the policemen why the group should follow them to the police station.

Concerning the holding cells at the Keratsini Police Station she stated that they lie straight ahead and to the right and anyone can look into them from a small window set in the door. She pointed out that she doesn’t know whether the identification of the suspects took place there, nor did she see any of the victims at the station, and she reported that state security came to the precinct.

Responding to questions by the Deputy DA she stated that she didn’t know whether there was a Golden Dawn event earlier on her shift, and that the spot the suspects had been stopped is a gathering place for various groups of people. She doesn’t remember whether they checked if the suspects were the owners of the motorbikes, and what gave her pause was that while the rest were living nearby, the woman was a resident of Patissia [:a quarter of Athens far from Perama or Keratsini]. Concerning the matter of how they knew the café employee was talking about this particular group of people the witness said she didn’t know, since the signal didn’t include a description.

They had received a signal to head to the intersection of Gr. Labraki Avenue and Schisto Avenue, and when they approached the suspects they didn’t ask them about the incident. As for Pantazis she didn’t say he had a leading role, neither did she notice something off in the group.
Responding to a question from a judge, she said that it was her own impression that the employee’s shift was ending, and that the employees themselves never said such a thing.

Responding to questions by civil action counsel Mr. Papadakis, the witness said it was the first time she received a signal to search for Golden Dawn members, while concerning the colleague who was driving the patrol car, Mr. Kasidiaris, she said she didn’t know if he’s related to the defendant. She stated that they didn’t search the motorbikes or conduct body searches of the suspects. Being a woman, she was not allowed to do so, and she only searched through the woman’s backpack. However, she doesn’t remember her colleagues from the other patrol cars conducting any search of the motorbikes or persons. When asked what they were doing there, Pantazis answered that they were simply hanging around. Pantazis and one other person were wearing Golden Dawn shirts, and he asked why they should follow the policemen to the precinct. She stated that they were cooperative, because they didn’t try to escape. Concerning the café employee the witness said the signal hadn’t mentioned a name, and that the employee had been surprised. Finally, she said that a group of people sitting in Café Beat is clearly visible from the street, because the space is open and has tables and chairs.

Responding to questions by Mr. Zotos the witness stated that she was the one to write the Incident Report as a civilian investigator of higher rank.  On the night in question they had received orders to hold their position on the scene, from which the closest Café Beat was 50 m away, open 24 hours a day, and so they went there and made a few questions, but they didn’t go to the ETEKA gas station, also open, because they thought the employees would have the same things to report. She repeated that the suspects were wearing dark clothes and when they got to the police station, they were first taken to the duty officer to submit their personal information, and then were led to the holding cells. She said she can’t identify Mr. Pantazis, since she’s not good at remembering faces, and that no one from the group looked older than the rest, and that they were all slim. She stated she could not describe the second person wearing Golden Dawn clothes. They requested the assistance of more patrol cars since the suspects were six and the policemen only two. The witness was shown some photographs, and stated that neither Pantazis nor anyone else was wearing a white shirt that night, and that she does not recall anyone holding an object such as a jerry can, maybe just a small bag.

The witness confirmed to Mr. Kabagiannis that the signal came after a call to the emergency telephone number and that it contained a mention to Golden Dawn members. The description matched the group of suspects, who were wearing Golden Dawn shirts. She went on to say that such an important piece of information would have to be entered to the route slip of the case files. Responding to more questions by Mr. Skarmeas, the witness clarified for the first time that the signal from central mentioned “persons with dark clothes, possibly members of Golden Dawn, suspected of an attack in an immigrant’s house.” She also stated that the incident was turned over to state security, because the crimes committed were under their jurisdiction, however in a relevant question by Mr. Sapountzakis she declined to answer, saying that she doesn’t know.

Concerning the Fyssas murder the witness testified that the only thing she knows is that he was murdered, and that she doesn’t know who the perpetrator is. She also had heard nothing about the attack on the members of PAME, neither about assault squads or other cases connected to Golden Dawn. She also stated that the fact that the attack was carried out against a house of immigrants alone does not point to an attack by Golden Dawn, since she has received signals to assist in houses that have been attacked before. The witness stated that she works her 8-hour shift and goes home, and that curiosity is not part of her professional conduct. As for Golden Dawn, she said that she knows that Golden Dawn is in Parliament, but that she doesn’t know who the party leader is.

Concerning Pantazis she reported that his answers didn’t differ from those given by the rest of the group on the night in question, and repeated that she can’t recall if the body size of the suspects matches that of the defendants. The hearing was adjourned amid rising tension and recriminations from both sides.