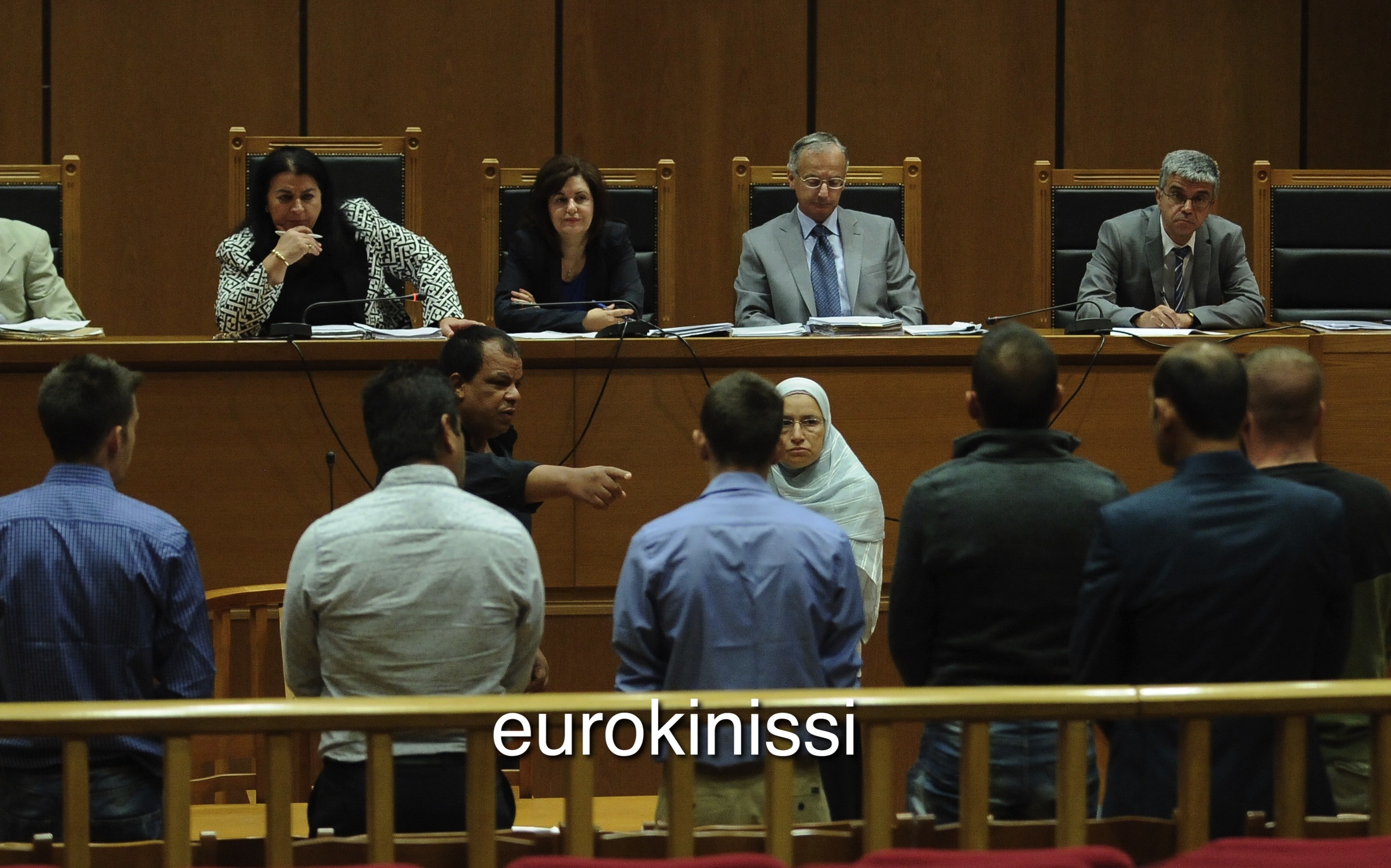 The courtroom remains open to the public upon presentation of a state ID card, which is retained by court authorities for the duration of the session. Audience attendance was limited compared to other hearings. Present were photographers and members of the press.

Present at the hearing were the five main defendants in the case of the attack against the Egyptian Fishermen (D. Agriogiannis, M. Evgenikos, Th. Marias, An. Pantazis, K. Papadopoulos), and I. Komianos (for the Fyssas case). Twenty-six (26) defendants were recorded as absent, and the rest were represented by their counsels.

Responding to questions from the presiding judge the witness stated that on the night in question he heard someone shouting louder than the rest but he doesn’t remember his countenance or what he was saying. The witness also stated that after the incident someone approached Ahmed to apologize but he can’t recall who it was. The witness was asked to identify once more the defendants present, something that caused the defense counsels to protest and submit a motion that the defendants be mixed with plainclothes policemen. The court once more rejected the motion. The witness identified D. Agriogiannis (in addition to the other four he had already identified).  He went on to say that the one doing the “shouting” was Pantazis, whom he pointed out for the court. Pantazis asked permission to speak, however the presiding judge told him that “you will have plenty of time in your plea argument”.

Responding to questions from the defense counsel, the witness described the incident he experienced, how he saw and heard the assailants right under his window. He went on to point out the parts of the house where he saw each of the defendants, who were carrying wooden and steel clubs. The witness stated that he had a good line of sight to what was happening inside the house at the time of the attack, and that he was informed by his neighbor Kostas that the assailants were members of Golden Dawn. He went on to say that the assailants had come with the intention to murder the Egyptians, but their plans had been thwarted because the neighbors had been alerted and the door to the house was locked. He also said that they were very afraid and so moved to another house the following day, and that he had heard of other attacks against immigrants. The defense counsels interrupted several times to comment on the interpreter or the answers of the witness, and civil action counsel K. Papadakis (for the Egyptian fishermen) asked for the interruptions to be noted down in the trial records. Defense counsel Oplantzakis (for Kazantzoglou, Kalpitzis, and Kalaritis) asked that the witness refrain from conversing with the civil action counsels during recess. At that point the presiding judge called for a brief recess.

Responding to questions by Mr. Papadakis concerning the preliminary questioning, the witness stated that his first testimony lasted about an hour, and despite the fact that his Greek wasn’t that good he was asked to sign it without the help of an interpreter. The police never asked him about a description of the perpetrators and they didn’t say anything about Golden Dawn. The civil action counsel asked about the identity of the neighbors that had gathered in the scene after the attack. The civil action counsel for the other two cases asked the witness whether he was familiar with these cases and if he saw any common traits between them and his own case. He answered in the affirmative.

ΙV. Cross-examination by the defense counsels

Defense counsel Karydomatis (for Pantazis and Evgenikos) asked about the motives of the perpetrators, attempting to demonstrate that the assailants did not directly attack any of the others (beyond Abouzide) and that they didn’t have deadly intent. He went on to ask the witness about other persons that were mixed with the defendants for the identification at the police station. He asked what clothes his clients were wearing on the night in question, and whether they were clean or dirty, i.e. work clothes.

Defense counsel Poulia (for Th. Marias) questioned the witness at length and with great detail about the position of the perpetrators, exhibiting photos from the interior of the house and disputing the perpetrators’ motives as they had been laid down by the witness, as well as his line of sight. The presiding judge repeatedly asked of the defense counsel to refrain from posing hypothetical questions to the witness, such as “why didn’t they knock on that window?”, “Is there a door here that leads into the house?” etc. She also wondered why they laid Abouzide on the floor instead of the bed, while they were waiting for the ambulance. She went on to question the witness about his relation to Abouzide and about the period of time he had stayed with them.

Defense counsel Gavelas (for Pantazis) focused his questions on the identification procedure that took place in the Keratsini Police Station after the incident, suggesting that the witness couldn’t make out their faces through the screen window of the holding cells, where the defendants were being held. The defense counsel motioned for an examination to be conducted in the police station, specifically about the door that leads to the holding cells. He also motioned for the witness to be detained for perjury because the policemen at the preliminary testimonies recorded GADA as the place of testimony, while he testified it was the Keratsini police station. Defense counsel Kassis (for Apostolou) motioned to call to the witness stand the police officers that were on duty at the testimony.

Defense counsel Tsagas (for Germenis and Michalaros) disputed that the perpetrators were wearing Golden Dawn clothing, as well as the witness’s line of sight on the night in question (for example: Tsagas: “Isn’t your line of sight blocked when three people this tall are standing in front of the door?” Mohammed” “I can see them fine. There’s nothing blocking the view”).

Defense counsel Zografos (for Gregos) insisted that the witness answer in Greek, but the presiding judge intervened to say “only if he understands the question.” The questions by said defense counsel had to do with the perpetrators’ motives “since there were other immigrants there [: in the neighborhood) why was no one attacked before or after?” or “did the others leave after the attack?”

The presiding judge made frequent admonitions to the defense counsels to stop them from commenting or whispering during the hearing.
Defense counsel Oplantzakis (for Kazantzoglou) wondered about why the brothers Abou Hamed financially helped Abouzied, and asked the witness what he had heard about Golden Dawn and the medium he heard it from. The witness answered that many people were talking about the party, that they are hitting immigrants and the defense counsel commented “they hit, they don’t kill”.  Through his questions, the defense counsel contested the severity of the attack against Abouzide as well as the witness’s purported level of comprehension of the Greek language.